By Dakota B.
August 26, 2015
FeaturedIndieInterview

I’m The Dink. I mean, that’s my internet name anyway. You can call me Joe. I always have a project in mind but right now I’m primarily a student with a nearly full-time job so that keeps me busy and mostly unable to pursue my hobbies/enjoyment/dreams. 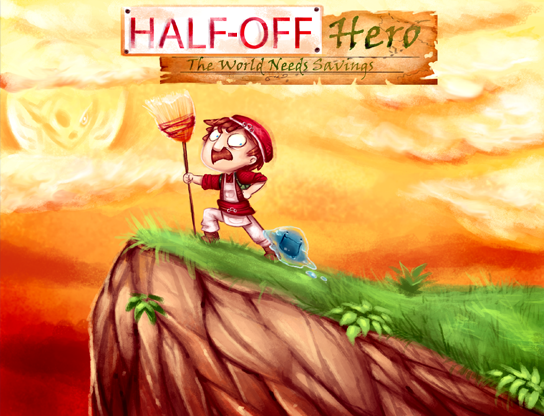 What is Half-Off Hero?

It’s my entry for the IGMC this year! It’s an Adventure, Visual Novel, RPG, with a comedic storyline. At least I’ve been told it’s funny? Humor is subjective and all that. Of course, it’s more than that too I think. I tried to do something different with the game I would make for IGMC 2015 and while it’s different from the experience I had in mind when I started out I feel there’s a lot of core elements still intact that people will find interesting.

I’ve always dabbled with the RPG Maker engine through the years but I never really committed to a project before. Last year for the IGMC was the first time I actually finished a game since I viewed it mostly as a hobby. So this year I met with an artist and decided to go all in. It was a lot of fun!

The art is really cute and warm to look at, what led to you choosing that art style for the characters and environments, and who is behind it?

That would be my number one favorite artist Alyssa Gerwig! (Also goes by pikminAAA on deviantart) She helped me with my title screen last year and I came to find out she actually goes to my school! So I arranged a meeting and she was really excited to be a part of the project! She’s VERY talented and we decided on a chibi, hand-painted look to both separate it from other entries and also to save on time. Honestly, I don’t know how she put all of this out in such a limited time frame. Girl is on another level. 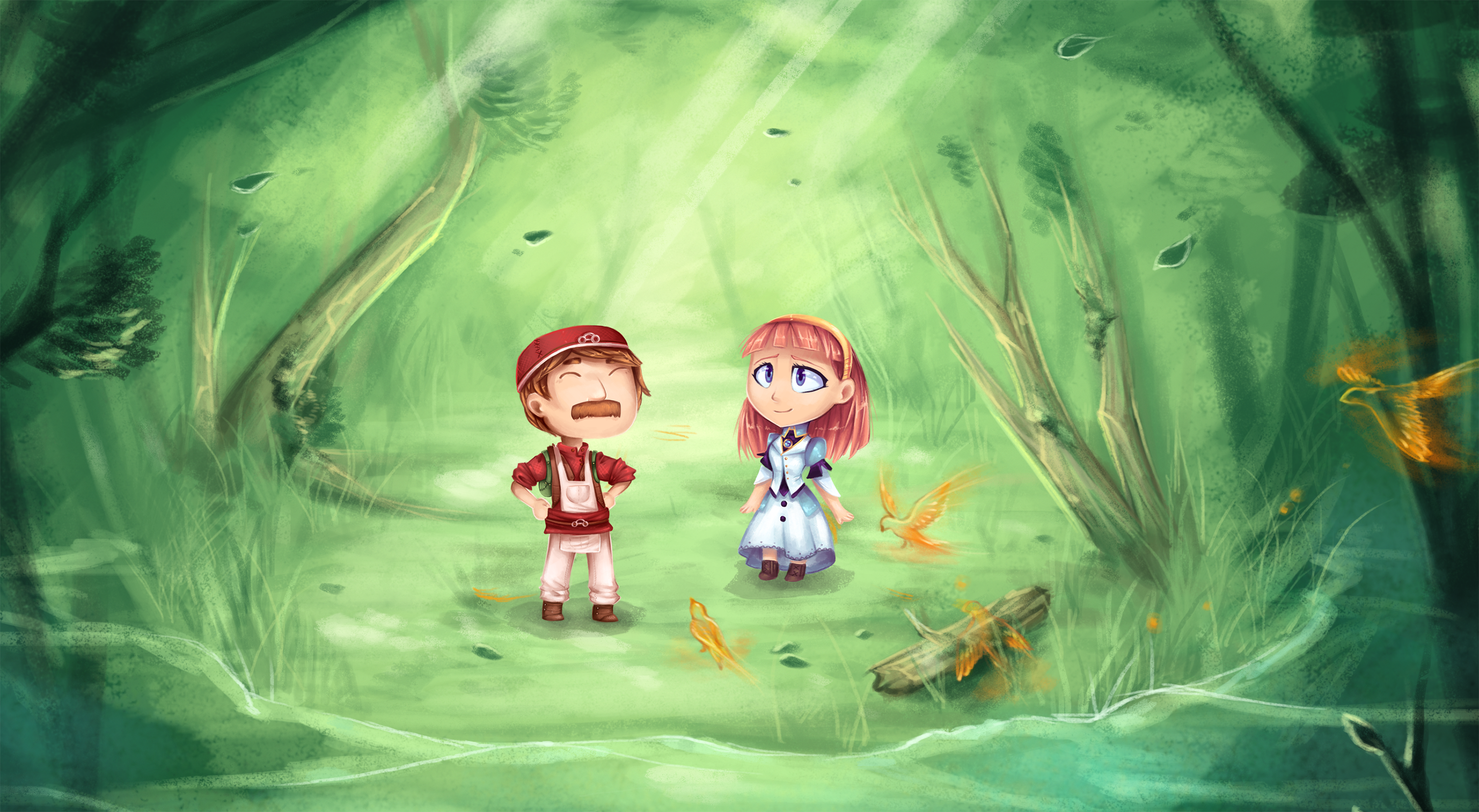 Is there anyone else on the team responsible for the game?

My brother helped me out with the play-testing. But other than that it was just Alyssa and I. She did the art. I did everything else. Well, besides licensed music and sprites obviously. Half-Off Hero is an RPG based around a character that is a shop owner that has no idea how to be a hero.  How did you come up with idea and how did you go about creating the gameplay that would fit this concept?

It’s an idea I came with up near the beginning of this year while writing stuff down. Although, it was just a concept back then. I hadn’t done any kind of story work or prototyping, because I had other things I was working on, just a few notes I wrote down while at work. I had a thought one day of, “What if the final boss of a game was unbeatable?” The rest all flowed naturally from there. Originally the game would have covered a ten-year cycle, as you watched the world change for the better or worse during your quest with dozens of potential endings for our poor shopkeeper. Once the contest started and I was able to get a couple weeks off of work, I started the project in earnest because it was the idea I was most passionate about. But yeah, I had to dial back a LOT of ideas I had during development. It’s pretty much a completely different game then what was on those notes in the beginning. Which is good because I learned a lot while making it. 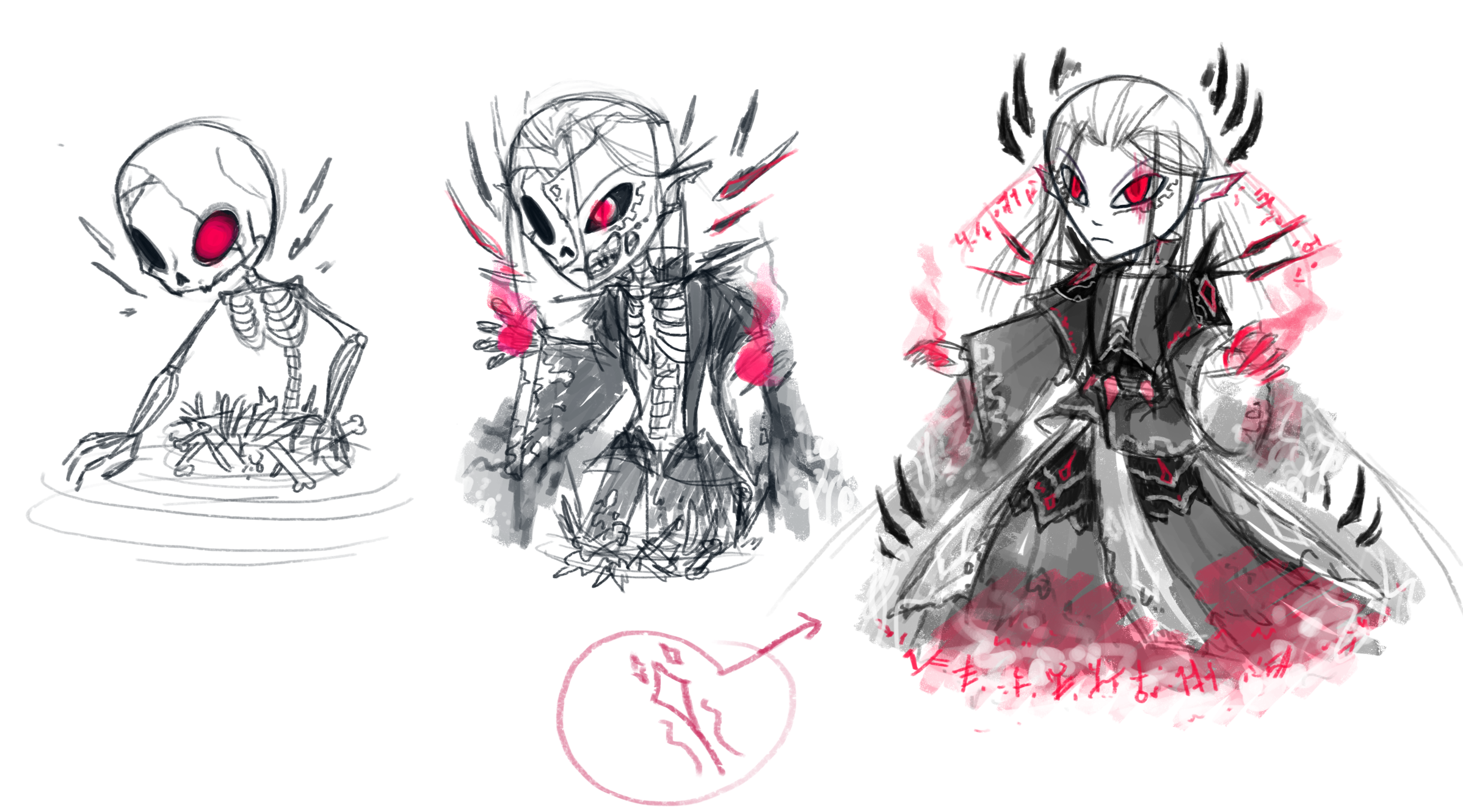 “What if the final boss of a game was unbeatable?”

The characters are all pretty interesting and they all seem to have a valuable purpose.  How did you come up with all of them and make sure they were all important to the player both through gameplay and story?

I’m glad you feel that way! It’s what I was aiming for. My method of design is different than most designers I’m sure since I’m not a professional. I wanted everything to feel as connected as I could make it and ensure every character had a reason for interacting with the player. A lot of characters changed roles as the days flew by (some even cut entirely) but they evolved naturally during the process. I wish I had more extensive notes to share but since time was such a factor I have forgotten a lot of the details in their creation. 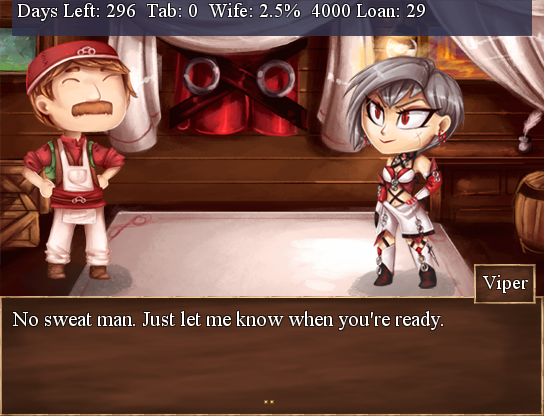 IGMC 2015’s theme was growth.  The theme overall wasn’t too hard for many games to incorporate but Half-Off Hero found a way to incorporate it into almost every aspect of the game and in some very unique ways.  Was this hard to pull off and how did you make sure each growth based mechanic felt fresh?

I actually got super lucky with the theme to be honest. Growth is an easy theme to work with in the genre I had originally chosen and most of the mechanics I was thinking of incorporating ended up needing minor tweaking to fit the theme. It was actually refreshingly easy. Boring answer I know, but really my main concern during development was keeping the feel of the game I had in mind in tact. Coincidentally this led to many opportunities to build on the contest’s theme. 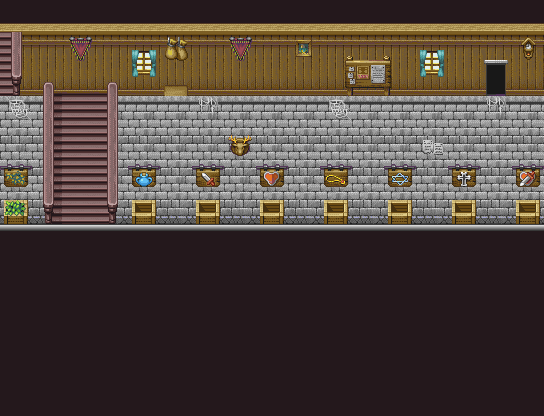 The original idea for the shop (was) side view with you running downstairs to get items. Proved to (be) repetitive to use

The humor in Half-Off Hero is fresh and the dramatic scenes can get pretty real too.  Who was behind the writing and directing the scenes?

Thanks for the compliment! I handled the writing and pretty much everything that wasn’t art-related. I’ve…actually never written a story of this length before. Or really any story for that matter. I had always wanted to try it out so I’m glad people enjoyed it! It was a lot of fun to make all the scenes come together. You had thirty days to pull off Half-Off Hero.  The art, the design, the programming, all of it was done in the course of a month.  How did you pull it off and how much of a challenge was it for you?

I don’t know how Alyssa was able to deliver the quality of art she did during the month. Major props to her. As for me, it was definitely challenging. Running the shop was the first thing I did because I really needed that to be enjoyable. After that came the world map and navigation menus. Then the story sequences and dungeons. Etc, etc. Finding the time to work so many strings and connect them together was exhausting. Especially since I was taking an online class over the summer that had its final during the contest’s time. But hey, who needs the sun and all that pesky Vitamin D? That’s what supplements are for. All-in-all it was well worth the challenge. 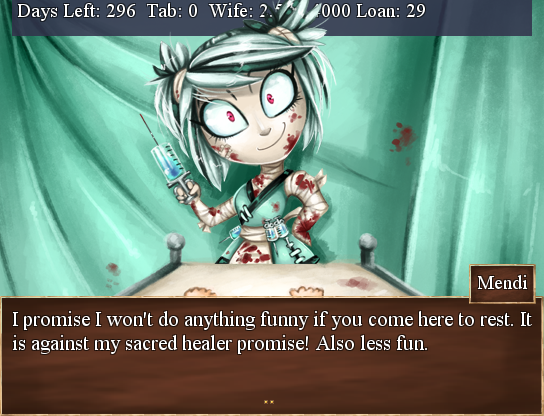 It’s been a couple weeks since the deadline and the game was submitted.  How has the feedback so far been and what do you think of your chances of winning one of the IGMC prizes, in particular first place?

It’s been really positive! It’s odd because I was expecting more negative criticism. I mean, I thought this was the internet? Where are all the trolls and negative comments? But even the people that didn’t finish the game tell me it was very well-designed. One guy told me he couldn’t finish because it wasn’t his type of game but that I would probably win the whole thing because it was “heads above the competition”. Which made my day. Honestly though, I’m just glad people are enjoying themselves and that what I was trying to do with the game was mostly successful. 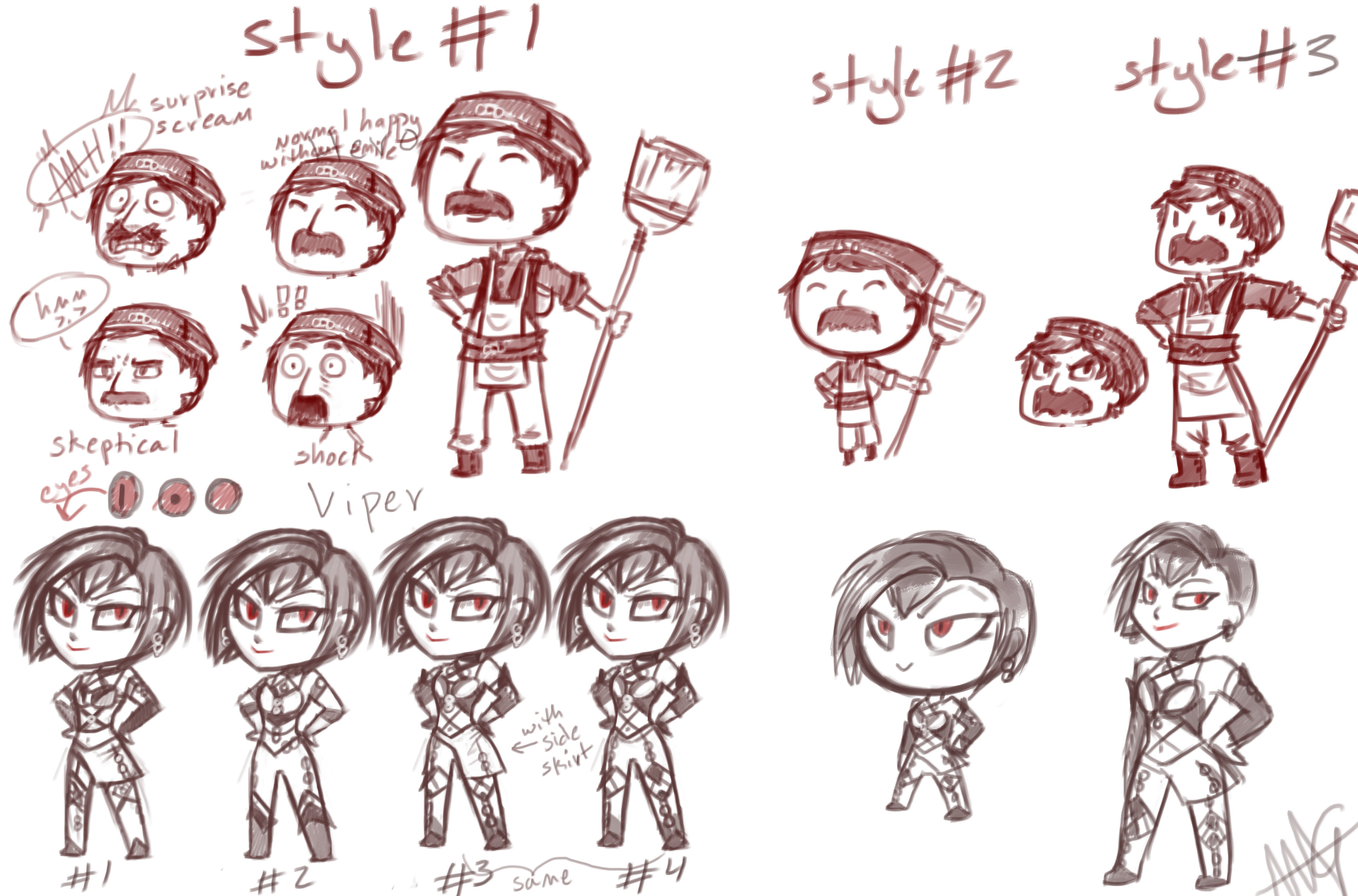 What are your plans moving forward with Half-Off Hero?  Will it continue to be worked on or is it final as is?

I want to add a lot. The game was sooooo much grander when I conceptualized it at the contest’s start so it would be nice to incorporate a lot of what was cut. You can probably expect more to come from it. Although, it won’t be for awhile sadly. I’ll probably make a build of the game to smooth everything out gameplay-wise and then release an expanded version at some date in the future with more endings and more options for each character you meet. Of course, I have other projects in mind so maybe you won’t. Time is the deciding factor after all.

I’ve never been good at self-promotion and portfolios but if people liked Half-Off Hero they can check out rpgmaker.net. I have my previous IGMC game on there and I’ll probably upload the rest of my free projects on it as well. Plus, if people ever need games and don’t have a buck to spare they can always try out some of the other members’ games.

Twitch has become one of the most popular streaming sites for amateur and professional streamers, particularly gamers who continuously broadcast while playing games such...
Read more