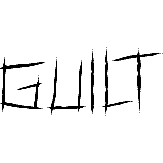 Hi! My name is Mickaël “Ylzor” Didier, I’m a French indie developer. I’ve released two games so far, one being Save Point for IGMC 2014, and the other being GUILT for this year’s IGMC. This means both of them were made within a month, and they are free!

GUILT is a Stealth/Horror 2D game focusing heavily on its story and atmosphere.
You play as a woman who wakes up in a dark forest and you’ll have to find a way for her to get out of it. It won’t be that simple though; creatures lurk in the forest, chasing you when they see or hear you. You’ll have to move quietly, unseen; and if you get spotted, you’d better run as fast as you can!

While exploring, you may notice some odd things, other than the creatures… You’ll have to figure out the story yourself by playing the game and keeping your eyes and ears opened. Why did you decide to make GUILT for IGMC 2015?

Honestly, I’m not sure myself! I had the story in mind, and the IGMC seemed like a good opportunity for me to put it in a game. At first, I wasn’t even sure what the gameplay was going to be like. I thought about putting combat in the game, but quickly it changed to stealth mechanics with a bit of puzzle elements. The main part was the story though. I had the whole thing in my mind and I really wanted to share it.
Once I heard about this year’s IGMC, I didn’t hesitate; this was the game I was going to make this year. That’s a pretty big difference from last year’s; I made a RPG focused on its combat system and a few funny dialogs here and there.

What makes GUILT special, why should people want to play it?

I think most people will enjoy what I put the most focus on; the story and atmosphere. It wasn’t always easy, but I put a lot of extra effort on those aspects. I had a pretty big challenge; telling a story without using a single word, which was a design choice I made from the beginning. That’s why I needed to make sure players know something’s wrong in the forest, but not only. I think it works, and I’m surprised at how much different versions of the story players have thought of!
I also think pixel art lovers will enjoy the game for its graphics. I had help from AlcopopStar and Lighterthief, two amazing pixel artists I had a lot of fun working with, and it shows. Some scenes would have looked a lot worse without their help. Some of them wouldn’t even exist, actually! Where did you take inspiration from when making the game?

I thought a lot about Flashback (the old one, which I played too many years ago on SNES I believe) when it comes to movements. I didn’t want the movements to be tile-based, but still wanted the main character to move slowly, unable to do crazy jumps or to turn instantly. Of course the climbing was also inspired by Flashback. For some reason, I loved just moving in that game back in the days, but I really sucked at it.
I guess there is a bit of Limbo for the atmosphere and the way to tell the story, but I actually really don’t like playing that game! Not that it’s bad, of course, but the spider alone at the beginning of the game made me put down the controller, saying “Nope”. I’m really terrible with scary things in general, so I just watched a friend play it for me, and then only I could enjoy it. I guess that’s pretty weird since my game has a few tense moments in it. 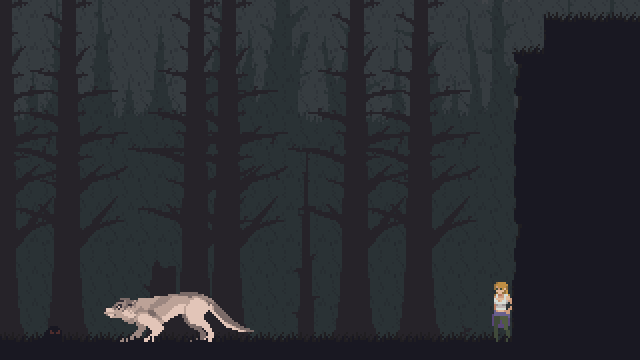 Was the thirty day time limit of IGMC difficult for you to pull off creating GUILT?

YES. That’s actually the main reason the game couldn’t be longer; making a screen with creatures patrolling could take a full day, and I’m still not entirely satisfied with some of them. The creatures need to move in a certain way so that the player can go through at some point, and that’s actually really hard to do! It required a LOT of testing, so much that at some point Game Maker refused to launch the game; there wasn’t any space left on my hard drive!
But the thing I struggled the most with was the creatures’ A.I. It still does some weird things now and then, but at some point it just couldn’t reach you at all. Two weeks into the contest I still didn’t have a good enough A.I to be able to kill a moving character. Making sure the main character was moving properly was also a challenge. As I said earlier my first game was a RPG, so going from there to a 2D side-scroller wasn’t as easy as I thought it would be.
I was really glad I was able to do most of the background graphics myself though (again, Lighterthief helped at some point!). I initially was going for a lot more details.

That’s the initial look I gave the game. I quickly realized I couldn’t put so much details everywhere, so I just decided to change “a few” things, and it ended up like that! 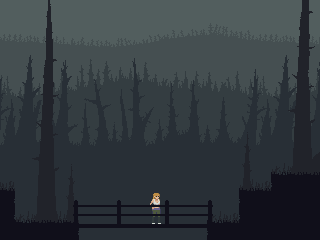 This is still a screenshot from early in development, it has changed since then. Even the character changed thanks to AlcopopStar!
From here, the graphics were a lot easier to make and it saved me a lot of time while still looking pretty nice, I think.
All things considered, the month limit of IGMC is what motivated me to make the game in the first place. If I didn’t have that limit, I most likely would have tried to make something I never would have been able to handle. But it was pretty though, especially when the weather was so nice!

What are your plans moving forward with Guilt?  Do you have any intention of turning it into a larger game or taking parts from it for future projects?

I’m most likely not going to make it a bigger game. I’m thinking about a version with a bit more scenes, a few things I want to fix/improve, but that would be it, really. I haven’t really thought about my future projects, but it’s most likely going to be a one time thing. 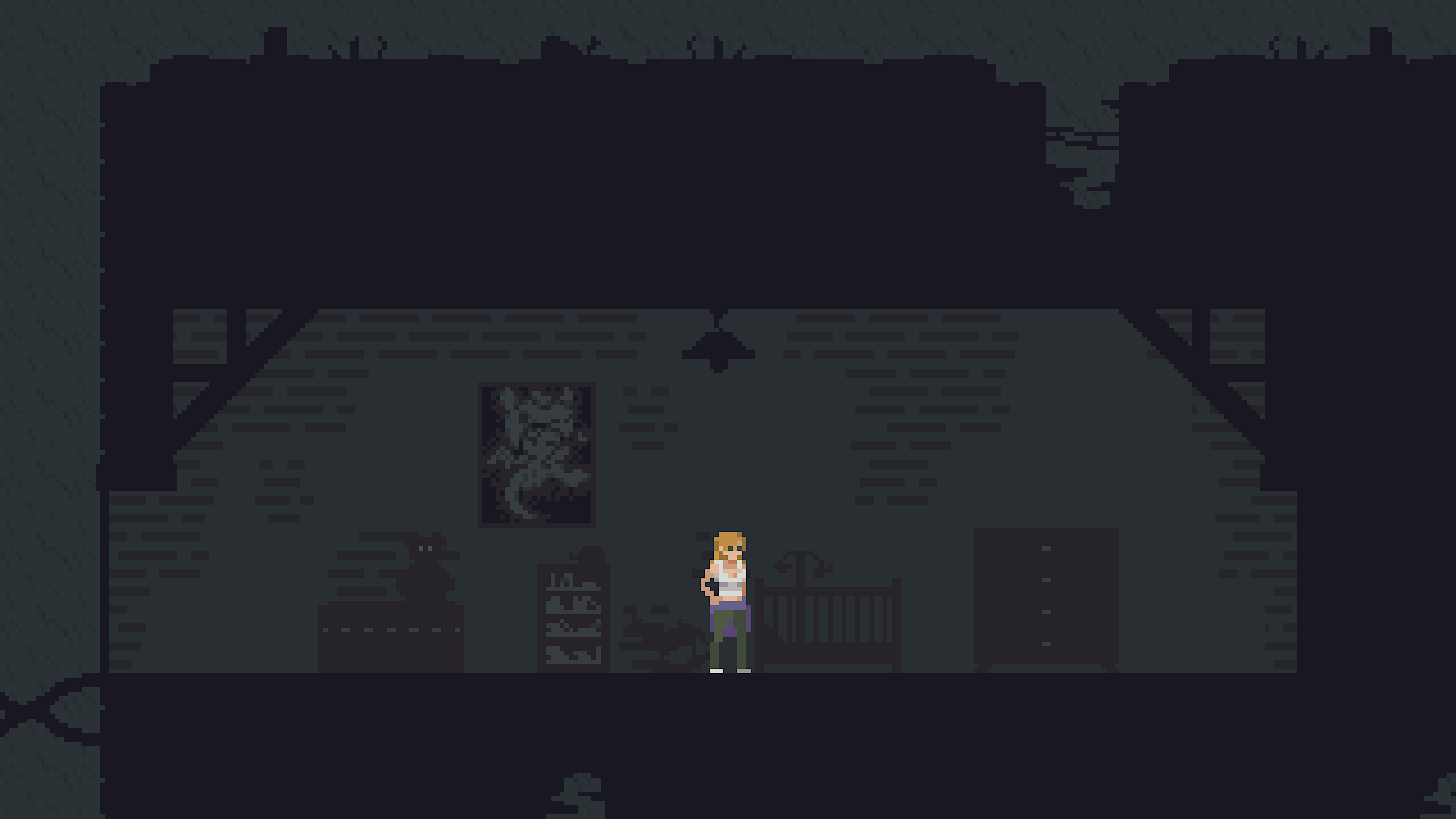 Have you learned anything through IGMC 2015?

Like last year, I’ve learned a lot, yes. And like last year, I made the mistake of thinking I’d have time to make a bigger game than I possibly could!
The main thing I learned was how to code an A.I and side-scrolling movements, really. And I still have a lot to learn! I also realize now how hard it is to have stealth in a game. Patrolling enemies, lines of sight that aren’t too harsh, making it so that even if you get spotted you still have a chance to run away…
Compared to last year, there’s been a lot more work put into looking for appropriate sound effects and music. I had to find exactly what the game needed, and I think I did a good job with that! Musicians over at audiojungle are amazing, so it wasn’t too hard to find quality sound, though.
I also learned how to animate a few things, which I’ve never done before! I’m really happy with how the creatures came along. At first they were a lot bigger, had teeth and didn’t stretch to get you; they jumped. I decided to change that so that could never leave the “black” parts of the background, as if attached to it.

I still like this version to be honest, but it caused a few problems in game, so I had to make it smaller. It’s then that I came with the idea of making them stretch, which is an idea I’m still really glad I had, it adds a bit of creepiness to them!

Any advice for other developers who have or plan on participating in IGMC, both now and in the future?

The main advice I’d give is to keep the scope of the game small. A short finished game is always better than a longer, unfinished game, and that’s true for every game, free or not. I’d also add to talk about your game. Share your ideas with your family, friends, or even people on forums or social networks! Getting feedback is always useful, even when you didn’t even start the game.

Where can people find/play GUILT?

You can download the game for free on the game’s contest page here: http://contest.gamedevfort.com/submission/2

Additionally, for more updates, news, screenshots, videos and all that good stuff, you can go on Gamejolt, indieDB or rpgmaker.net! 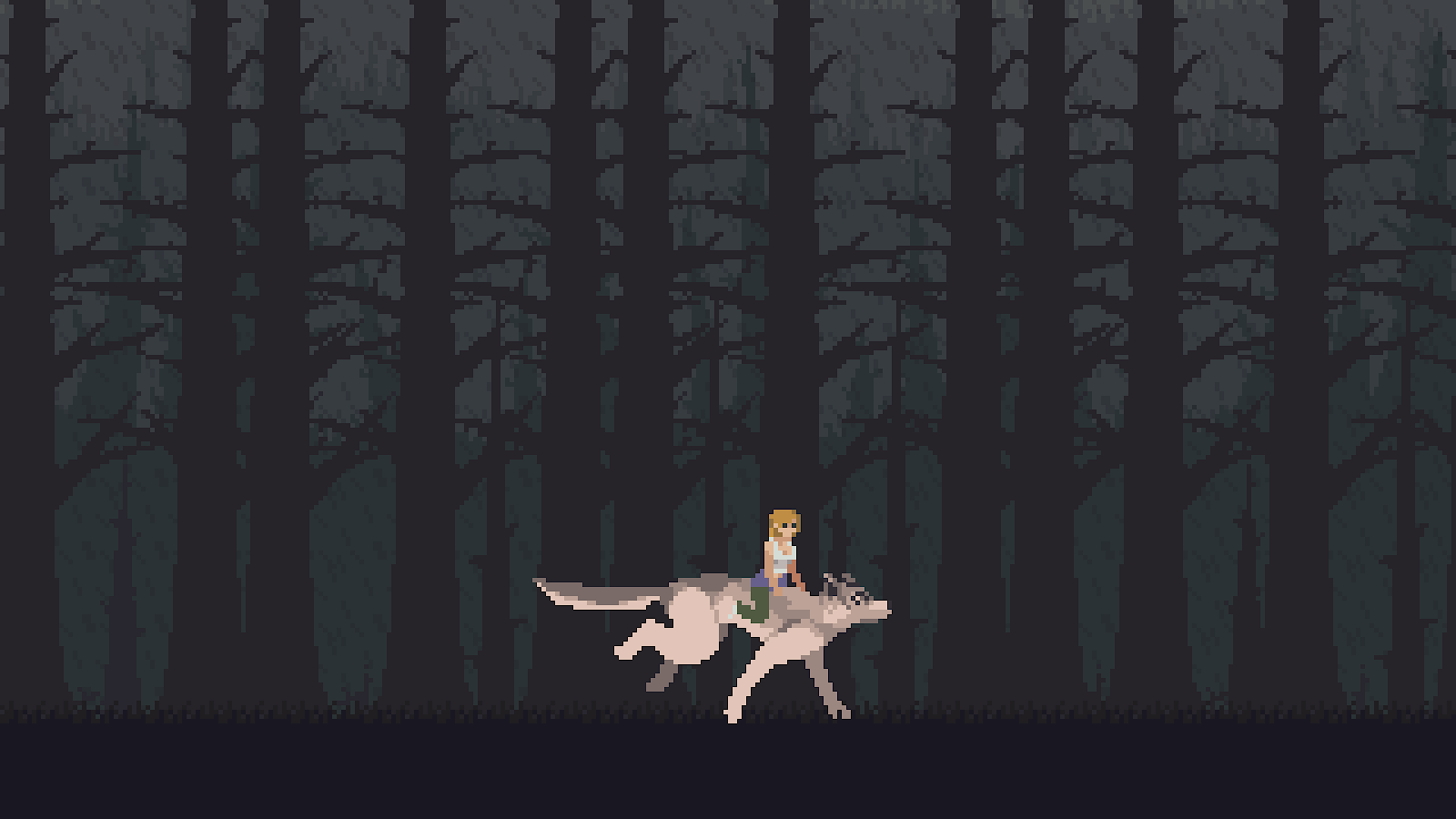 Anything else you want to say to the GamerBolt community?

I’d like to thank everyone for their interest and for playing the game. The feedback I got so far has been awesome!

I’d also like to thank those who voted for me on the game’s contest page and encourage those who didn’t to do it, it helps a lot! You can also follow me on Twitter @Ylzorr for updates and future projects! Thanks a lot!