We’ll analyze all possible and most value-for-money choices for every price tier, as of January, 2020. We’ll break this guide into three parts, because we have a lot to cover for every component (we’ll add links to each article when they get published): 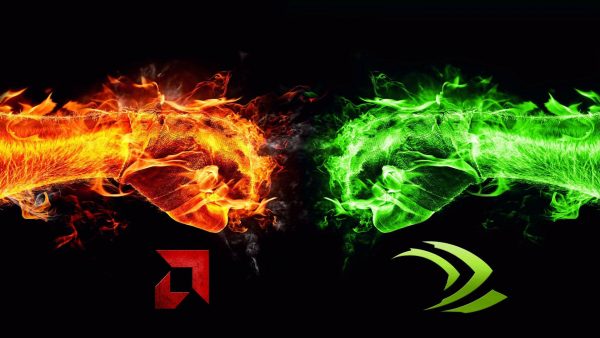 The graphics card market has become quite confusing lately, with so many products being launched every so often by both sides, Nvidia and AMD (No, I don’t count Intel as a side with their new “graphics card”). This article will (hopefully) make your next upgrade decision a bit better, by providing both solid reasons as to why choose a specific graphics card and how every card performs based on their specifications.

While at first glance you might think that the RX 570 8GB is the best option, because it provides you with better FPS in almost every game and has an extra +4GB Video RAM (VRAM), you might need to consider each card’s average watt consumption and how old each card is. In the current comparison, the AMD choice is somewhat old, being at the current time 33 months old and Nvidia‘s is 9 months old. Having said that, because the GTX 1650 is relatively new, it uses a newer architecture and is built on a smaller process (12nm), it needs less watt under load and because it needs less watt it produces less heat. 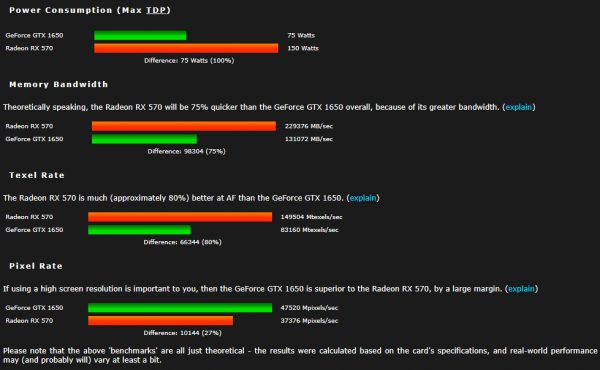 The numbers speak for themselves. The RX 570 is clearly the stronger card here but needs more watt in order to work and the GTX 1650 is still a strong option but it’s more suited towards those that seek a lower watt consumption while also being able to game with eye-candy graphics at solid framerates (Keep in mind, we’re only talking for 1080p resolutions and nothing further).

Conclusion for the entry-level tier: With both cards having similar prices at the moment, for those that can support the extra wattage consumption, the RX 570 is solidly a no-brainer. Else, for the individuals whose power supplies can’t support 150+ watts for the graphics card or just straight-up want a power consumption-friendly PC, then the GTX 1650 is a solid choice. Let’s move to the next tier.

Here we can see both sides trading blows in almost every game and technical comparison. While we could see this mostly one-sided (with the winning side being Nvidia) because of the Ray-Tracing technology, the RX 5700XT can process Ray-Tracing almost as well as the RTX 2060 Super, so there really isn’t any clear winner in terms of Ray-Tracing processing. 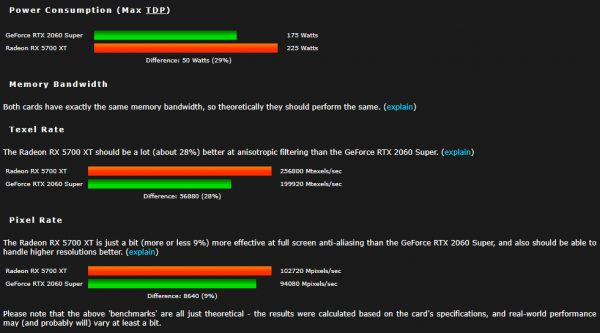 What we can see, though, in terms of general performance, the AMD side can deliver a better experience at faster framerates, at the cost of more watt consumption and thermals, which is not optimal. The Nvidia side, however, has a hidden ace under their sleeves. While the RX 5700XT is built on a 7nm process (with the RTX 2060 Super being built on a 12nm process), it does need more power under load and outputs a lot more heat in comparison to the RTX 2060 Super. While gaming on maxed out graphics and at 4K resolutions, the RX 5700XT managed to peak at a sky-high 86 degrees Celcius (that’s 187 degrees Fahrenheit) and the RTX 2060 Super just barely peaked at 67 degrees Celcius (153 degrees Fahrenheit), thanks to its Turing architecture that manages to be a high-speed performant at a lower power consumption.

Conclusion for the mid-range tier: Both cards perform great for their price, both cards can play at 4K resolutions and ultra graphics settings at 60+ FPS, but the RX 5700XT is sub-optimal (although speedier) because of its high heat output. For us, the AMD side here, is gonna have to be nominated with the 2nd place with the 1st place being nominated to Nvidia, for its superb graphics card and architecture (But A+ for effort, AMD).

With AMD being unable (at the time of writing) to respond to Nvidia’s top of the line graphics card and its strongest card at the moment is the Radeon VII, the immediate clear winner here is the RTX 2080 Ti. Do you want a 60+ FPS Ray-Tracing experience? You got it. Do you want to game on above 4K resolutions and still manage to reach the buttery smooth 60FPS? You got it as well. Whatever you throw at the RTX 2080 Ti is child’s play, there’s nothing at all that it can’t handle and still manage to play at 60+ FPS under all circumstances, with excellent thermal output as well. 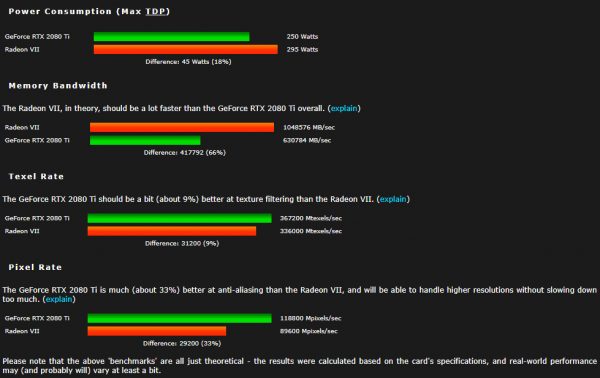 Conclusion for the enthusiast-range tier: With both cards being a solid choice that are aimed at enthusiasts but with a substantially different pricetag between them, the clear winner here in terms of raw performance, despite its pricetag, is indeed the RTX 2080 Ti. The Radeon VII does lag behind Nvidia’s best graphics card, but it still remains a good choice for its money and the performance it gives.

Stay tuned for part two and part three of this article, in which we will discuss CPUs and monitors afterwards.