I’m standing atop a hill covered with leafy vegetation and gently swaying trees. Overlooking an enemy base, I send out my drone and organically recon the area, watching for enemy patrol routes and judging distances. Satisfied I’ve got them all figured out, I launch my sneaky assault, winding my way down to the base from my perch and expertly predicting enemy movements. One enemy remains after I’ve systematically dispatched my enemies and looted them. The chase is on.

When it’s good, Ghost Recon: Breakpoint is very good indeed. These moments – sneaking through bases, organically taking down enemies, and watching for unexpected surprises – are tense and invigorating. There’s something really compelling about Ubisoft’s tried-and-tested “sneak through bases and liberate districts” formula. Make no mistake, this is a formula Ghost Recon: Breakpoint adheres to strictly, despite a few innovations.

I say “when it’s good”, because Ghost Recon: Breakpoint isn’t always good. Usually, the game is extremely solid; it’s a mixture of Far Cry 5 and Ghost Recon: Wildlands (which is appropriate since it’s a sequel to the latter game). Occasionally, I encountered a few unpleasant bugs or glitches, but it’s hard to judge a game on those things when they’ll definitely be patched out sooner or later. One or two of Ghost Recon: Breakpoint’s problems run a little deeper than that, but it’s still a great game.

Let’s backtrack a little and set things up. Breakpoint takes place six years after the events of Ghost Recon: Wildlands. You’ll see a few returning characters from that game, so if you fell in love with its cast, you’ll be glad to see a few fan favourites making an appearance here, including Holt and Midas. Protagonist Nomad also makes an appearance, although he’s a fairly blank slate intended to serve as an avatar for the player, so he’s not particularly memorable. 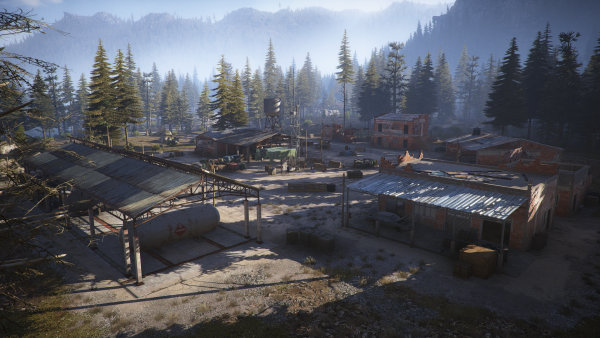 Nomad and his fireteam are inserted into the South Pacific island of Auroa in order to take down Walker, a rogue lieutenant who’s betrayed the US Army. Walker is played with steely aplomb by Jon Bernthal, whose face you might recognise if you’re a fan of Marvel’s Punisher franchise. Performances elsewhere are perfectly fine, but it’s Walker you’ll stay for if you’re interested in the narrative. Bernthal injects the character with a reluctant resolve that makes for a far more compelling experience than Wildlands’ slightly underwhelming villain did.

The setup of Ghost Recon: Breakpoint is just that: a setup. Unlike Wildlands, Breakpoint doesn’t waste time establishing major players or narrative context. Instead, it knows what you’re here for and allows you to get on with doing that instead of stumbling over characters and story beats. Nomad’s helicopter goes down over Auroa and the members of his fireteam go missing. It’s your responsibility to find your fireteam, take down Walker, and save the day. 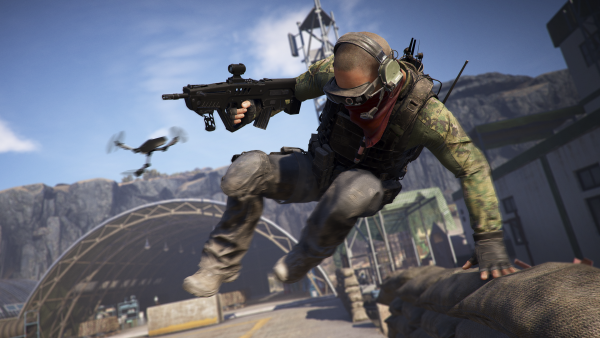 Right off the bat, you’ll notice things have been dialed up for Breakpoint. This isn’t Wildlands. Although I said earlier that the Ubisoft formula is very much present and correct here, there’s a significantly increased emphasis on survival that will alienate all but those looking for hardcore thrills. If you’re wanting a casual introduction to the world of Ghost Recon, you’re better off hunting down Wildlands. Breakpoint’s sandbox is reactive, responsive, and very, very hostile.

This manifests itself in some genuinely interesting ways. Ghost Recon: Breakpoint knows that Nomad and the Ghosts’ chances of survival are slim, so it introduces new mechanics intended to demonstrate this to you. If you get taken down in a firefight one too many times, you might get injured, impeding your ability to run or shoot effectively. If you ever played Far Cry 2, you’ll recognise this as Ubisoft genuinely attempting to make a world feel aggressively opposed to you. 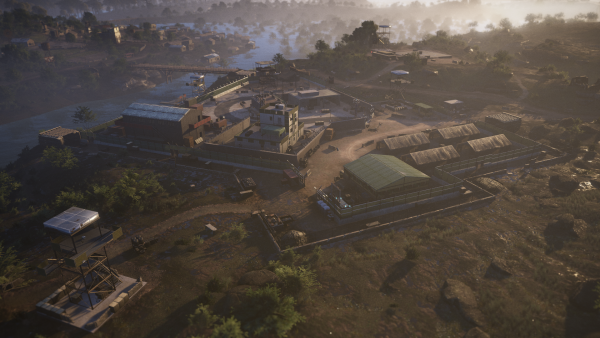 There’s also a new Stamina mechanic which encourages you to pace yourself and take it easy as you explore Breakpoint’s almost embarrassingly massive sandbox. If you expend too much Stamina – running, for example, will do this, as will climbing – you’ll notice your max Stamina decreases. You’ll also lose health if you run out. This system of resource management and expenditure put me in mind of The Legend of Zelda: Breath of the Wild in a good way.

That’s not to say Breakpoint doesn’t give you the resources and tools you’ll need to survive. Although you get injured easily, Breakpoint gives you infinite bandages. Be careful, though; you can’t heal in a firefight, because bandages take time to apply. Similarly, when you get thirsty, you’ll have a canteen from which to take a swig, but you’ll need to make sure there aren’t any enemies waiting to ambush you in the distance before you devote time to doing this.

If you’ve played Ghost Recon: Wildlands, you’ll likely recognise the core gameplay loop of Breakpoint. In essence, the two games are very similar. Each mission generally involves scouting a base using your flying drone (which operates similarly to the eagles in Assassin’s Creed Origins and Odyssey) before heading down and taking them out systematically. Sometimes, Breakpoint throws a curveball your way, but the missions are mostly fairly formulaic. 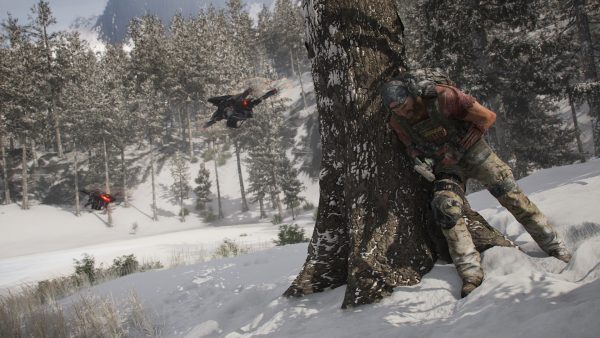 That’s definitely not a bad thing, though. There are two things Breakpoint needed to get right in order for its core loop to be fun: stealth and shooting. Unlike Ubisoft’s Far Cry franchise, Ghost Recon is played entirely in third-person, and Breakpoint’s many swampy base assaults reminded me why that’s a good thing. Being able to see your character is massively advantageous for taking down enemies efficiently, and Breakpoint’s excellent map design makes this even more fun.

It’s worth noting that Ghost Recon: Breakpoint has been designed around multiplayer co-op, and it’s here that the game takes a very minor stumble. The sandbox contains hundreds of enemies and animals who won’t hesitate to attack you if you get within stumbling distance, and these encounters become significantly easier when you’re accompanied by friends. In solo mode, there’s no getting around the fact that it still feels like Breakpoint wants you to play with friends.

That said, there’s still a thrill to be had taking on challenges that are clearly too high a level for you. Ghost Recon: Breakpoint takes on a similar structure to the aforementioned Assassin’s Creed games and has a leveling system, as well as a loot-gathering mechanic. If you want to tool up and take on the game’s sandbox, you’ll need to increase your character’s level and gear them up with better equipment. If you like looter-shooters, then Breakpoint is right up your alley.

It goes without saying that if you’re not a fan of that genre, Ghost Recon: Breakpoint probably isn’t for you. There is something faintly vestigial about the game’s number-based equipment system, but there’s also a thrill to be had in gathering new guns and armour and taking down bases safe in the knowledge that with your new arsenal you’re unstoppable. In this way, Breakpoint manages to gradually change from a frantic game of survival into a power fantasy. 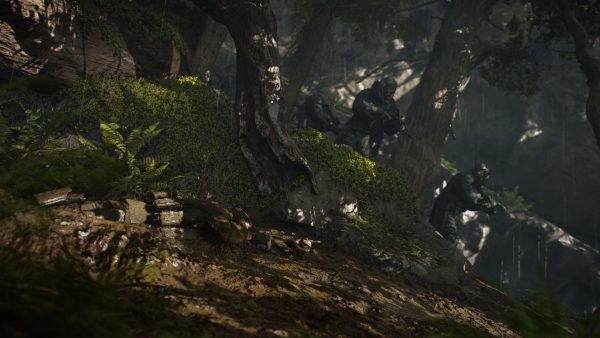 There’s also plenty of reason to explore Ghost Recon: Breakpoint’s huge and detailed sandbox map. If you want to know what’s going on in the storyline, you’re going to need to hunt down optional collectibles and hidden backstory documents. Initially, it might feel like you’re not being given enough narrative to go on, but the advantages of this method reveal themselves during repeat playthroughs; you don’t want to be bogged down with exposition if you’ve already seen it all before.

What narrative there is in Ghost Recon: Breakpoint is interesting, but it’s not essential. You can easily treat Breakpoint as a sandbox wilderness survival shooter with crafting elements if you want to. Backstory on Walker, Nomad, and the other characters in the game does reveal itself over time, but you don’t need to trouble yourself with it if you’re just looking for a pure gameplay experience. Breakpoint knows what its players want and delivers in spades. 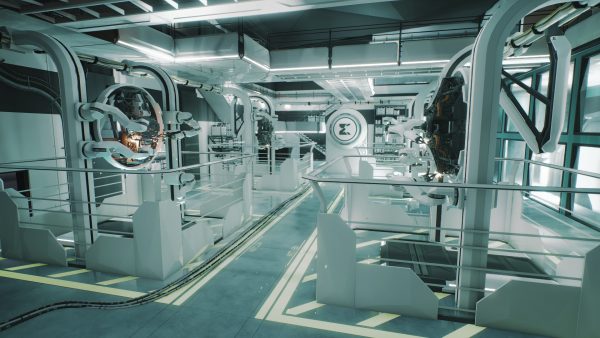 There are only one or two minor bugbears bringing down Ghost Recon: Breakpoint. The game as it stands is a little glitchy, meaning you can sometimes encounter problems in the world that stop you from making effective progress. It’s nothing game-breaking, but sometimes your immersion will shatter thanks to an animation hiccup or an incorrect sound cue. Again, there’s plenty of time for Ubisoft to fix this in patches, so I’m not going to hold that against them too much.

In summary, Ghost Recon: Breakpoint is a great time. It’s not looking to reinvent the wheel with its light survival gameplay and open-world wilderness base-assault structure, but it’s an excellent way to kill a few hours with some friends each night. Somehow, the world of Auroa manages to feel simultaneously threatening and relaxing; it changes and shifts in predictable ways, many of which will still kill you, but watching and waiting to see what they are is part of the thrill. If you’re looking for an unadulterated good time with gaming, this will deliver. Just don’t expect it to light the world on fire.