Yooka-Laylee And The Impossible Lair Review – The Mascot Redemption

When Yooka-Laylee was announced, a great deal was made about how the game was a product of former Rare Studios employees. That’s because Rare has a pretty impressive pedigree when it comes to platformers; they’re the creators of Banjo-Kazooie, Conker’s Bad Fur Day, and, of course, Donkey Kong 64. It was the first and last game in this list that Yooka-Laylee was moclearly modelled on, although it did take the irreverent sense of humour of Conker’s Bad Fur Day (albeit without quite so much vulgarity).

Now, Playtonic Studios are turning their hand to a spin-off-come-sequel called Yooka-Laylee and the Impossible Lair. It’s interesting to note that Playtonic’s trajectory appears to be Rare’s in reverse. Rare began its platforming life with Donkey Kong Country on the SNES, a 2D platformer which boasted incredible visuals that kickstarted the 2.5D platforming revolution. They then moved to 3D with Donkey Kong 64 and Banjo-Kazooie, but Playtonic is moving in the opposite direction.

That’s right: Yooka-Laylee and the Impossible Lair is a 2.5D puzzle-platformer instead of a 3D explorative game. It’s not really a sequel in the traditional sense; the gameplay systems, visuals, and general tone are different to the game’s predecessor. Still, it’s definitely possible to see Playtonic’s experimental approach and playful irreverence in Impossible Lair. The first game was a mild disappointment, so it’s a joy to report that Impossible Lair feels like getting back on track.

Here’s the setup. The dastardly Capital B (yes, he’s a bee) faces off against the Royal Bee-tallion. You must progress through a series of levels, rescuing bees and rallying your forces against Capital B. Each bee you rescue adds to your forces. It’s not a particularly clever or interesting story, but it’s a fine backdrop for the absolute waterfall of bee puns this game will drop on your head. If you’re going to play Yooka-Laylee and the Impossible Lair, make sure your pun tolerance is a-buzz average.

Right off the bat, Yooka-Laylee and the Impossible Lair impresses with what might be its cleverest and most interesting mechanic: the final level is available to try right from the beginning of the game. Playtonic says it was inspired by The Legend of Zelda: Breath of the Wild in this regard, and it shows. If you want, you can take down Calamity G-I mean Capital B early, but you’ll struggle if you haven’t rescued the requisite number of bees, each of which adds to your shield strength as the game goes on. 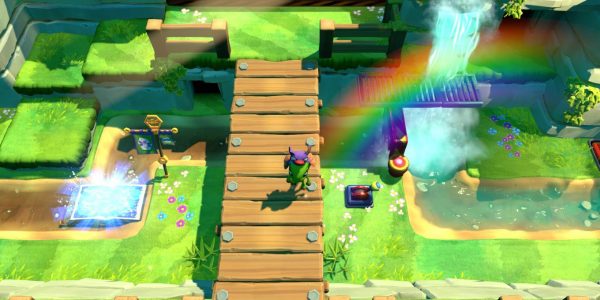 This is an ingeniously organic way to gate progress. If you’re a speedrunner, a thrillseeker, or completely insane, you can try and take on Capital B’s lair right from the off. This makes Impossible Lair perfect for repeat playthroughs; you can tackle the game in its intended order when you first play, then you can try and take down Capital B early when you replay. It’s rare for a developer (no pun intended) to take its speedrunning community so seriously, and it feels like Playtonic wants to make up for past sins.

If you did try and take on Capital B early, you’d be missing the meat of the game, though, and that would be a shame. Yooka-Laylee and the Impossible Lair strongly resembles Donkey Kong Country in gameplay terms. Stages take the form of 2.5D puzzle-platforming affairs, and there’s a stronger emphasis on your grey matter than there was in DKC. Still, the overall structure resembles Rare’s magnum opus. You have two health points, Laylee flies away if you lose one, and the visuals overall are strongly reminiscent of 2010’s Donkey Kong Country Returns.

One key difference between this game and that SNES classic is the addition of an explorable overworld. If you’ve played 2017’s Mario and Rabbids: Kingdom Battle, you’ll recognise the basic structure. Yooka and Laylee can explore the top-down overworld for hidden collectibles, using upgrades and new abilities along the way to unlock more of the map and access hitherto inaccessible areas. It won’t trouble all but the youngest of gamers, but it’s a lovely addition nonetheless.

The actual levels themselves are expertly designed and a massive step up from Playtonic’s original Yooka-Laylee. Unlike that game, the stages here actually feel like they were created by game designers and not just folks full of nostalgia for the heady days of Banjo-Kazooie. There’s nothing particularly out of the ordinary in the design, but Yooka and Laylee’s smorgasbord of abilities and extra powers keep things interesting throughout, even when the difficulty curves a bit. 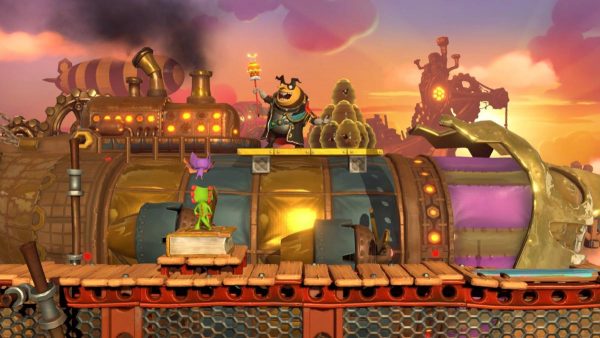 The other clever string to Yooka-Laylee and the Impossible Lair’s bow is its remixed levels. Each stage has an alternate version you can unlock which completely reworks the level to add a new central hazard. For example, if you blow a level with a gust of air in the overworld, the level will gain a new wind-themed alternative version for you to run through. The stages feel impressively different to their original versions, meaning you’re effectively getting twice the game here if you play the alternate stages.

It’s a delight to say that Yooka-Laylee and the Impossible Lair is a return to form for Playtonic, which sounds like a strange sentence given that the studio has only created one game. Tightly designed, focused, and fiendishly challenging without being too difficult, Impossible Lair is the direction this franchise should take from now on. We love our 3D platformers, but it seems that Playtonic’s skills lie in this more traditional design philosophy. Hooray for the bat and lizard!