By Dakota B.
August 5, 2015
EditorialsNewsPC

Back in 2008 there was a promising real time strategy game released as a part of the Tom Clancy franchise called EndWar.  It was a good looking game at the time that featured interesting mechanics.  Most notably amongst those mechanics was the ability to give orders to your troops through the use of a mic, as this predated the days where many Xbox owners owned a Kinect.  The feature didn’t always work how it should and the strategy end of things was unbalanced.  If you played as the American faction and put anti air on your tanks you could use just tanks for the rest of the game and win without a challenge.  But regardless the game was worth checking out and I hoped to see it come back someday with better polish.

Recently I was invited to a beta for the new EndWar, called EndWar Online and to my surprise it was a browser based game.  At first I was excited to get my hands on a new game in the franchise and then I saw it was a city builder (or military base builder in this case) similar to mobile games such as Clash of Clans.  That fact had my expectations for the game set rather low.  I’ve played some city building games before that were good but for the most part they all felt the same and I usually felt like I needed to keep making microtransactions to speed things along.  So when I saw an RTS I liked become that I was not too happy, luckily I was proven wrong and here’s why. Let’s tackle what could have been the biggest issue first.  The base building.  As typical of games that feature this mechanic, you select a building and for a set amount of resources you can upgrade it.  Doing so in EndWar Online provides a health and damage boost to the related unit type.  The building processes can be sped up with the use of gold, a currency currently earned through gameplay but looks to be purchasable in the future.  After a couple weeks of playing for short periods of time here and there I found that even my high level buildings only took fifteen minutes or less to upgrade which meant by the time I went and fought a couple battles they would be finished, so there was never a real need to spend gold.  The only time I did was to complete a daily mission before the time ran out and even then I didn’t have to do that.

As is the build times are great and I don’t feel they need much if any changing.  It needs to be said though that in the current Alpha microtransactions are not available, so these build times may not be final.  It would be very easy for them to double or triple the time it takes to upgrade in order to encourage the purchase of gold.  However until a change like that is made, and I hope it is not, this mechanic is a good one that feels right alongside the other gameplay mechanics. Perhaps most importantly in a game like EndWar is the combat, is it enjoyable and does it feel right?  To that I can say yes and yes but note that EndWar Online is not an RTS like the original EndWar.  Instead the combat is simplistic and plays out more like a game of rock, paper, scissors, than actual combat.  Each map features between two to four lanes (at least in my gameplay thus far) and you place your units along these lanes to send from your base towards the enemy’s base.  Each unit has its strengths and weaknesses and some units have varying roles.  Helicopters, Tanks, and Anti-Air Vehicles (AAV’s) are straight combat focused.  They will head towards the enemy base and try to destroy anything in their way.  Artillery will try to find a vantage point they can use to rain down damage on land units across a large portion of the map.  Infantry will try to buildings for either defensive or offensive bonuses, Drones will attack buildings and ignore enemy units, and Air-Transports will carry land based units across the map to avoid enemy conflict.  All units follow a circle of destruction similar to RTS games in that certain units are better against certain enemies than other units.  For example Anti-Air Vehicles are great against Gunships, Gunships are great against tanks, and Tanks are great against just about anything on the ground that gets in front of them.

You’re provided with a set number of units to call in based on your commanders available.  A commander will represent a certain unit type such as tanks.  A commander’s level effects how powerful their skills can be and their rank decides how many units they can call in and how many skills they have.  There are multiple commanders you can hire for each unit type that bring altered versions of the same unit to battle.  For example one tank commander has more traditional tanks with an ability to fire multiple shots in succession while another tank commander has tanks with laser beams that can be charged up and fired in a long blast down a lane.  These units can also be outfitted with different armors, weapons, attack systems, and defense systems to provide additional boost to their stats. Half of your time spent in EWO is going to be spent collecting resources, reading mission descriptions, upgrading your units, crafting items, and so forth so it’s important that the game’s UI is good.  EWO’s UI isn’t anything beautiful of fancy, you won’t be walking through a base with 3D modeled characters to interact with, but it is layed out well and never feels intrusive which is really all that matters or could be expected of a browser based game.  Useful information is provided with a simple mouse over, the windows don’t usually overlap or get clunky, and guides are provided for many of the game’s features that will show you step by step with arrows guiding you what to do in case you ever forget how to do something.  Overall it’s not going to wow anyone but it won’t bother anyone either.

Crafting, Gathering, and the Search for More 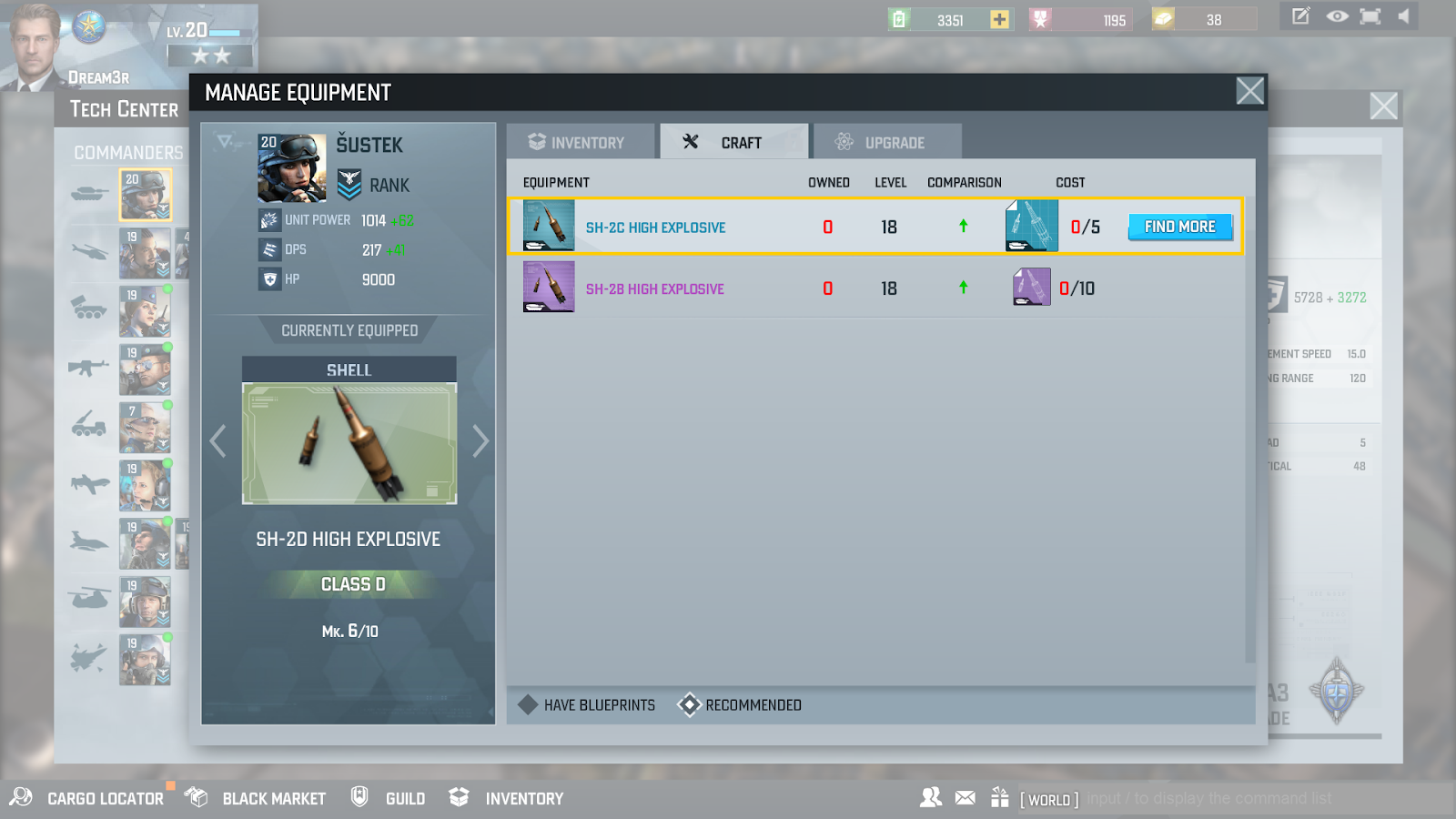 Keeping your units on their game isn’t necessary for your first playthrough on Normal Mode but if you wish to play Advanced Difficulty or Multiplayer it’s important that your units are as strong as they can be.  This means gathering blueprints for more powerful gear and the resources it takes to build that gear.  To do so you have multiple options.  You get free items daily through RNG with a mechanics called the Cargo Locator.  You can also buy specific items through the black market, or the main way to get them is through completing battles each one providing certain rewards.  To increase your chances of getting the better materials you need to complete the battle with certain extra challenges such as not bringing tanks into the battle.  The amount of resources the game provides is fair though it can be a grind if you’re only wanting to upgrade certain units instead of whichever ones you find loot for.

With a game so focused on upgrades it’s not such a bad idea to have multiple “resources” needed to get those upgrades.  There are four main ones to look at.  Experience levels up your main character, you get this from completing missions and battles.  Since your commanders can never be more powerful than your main character this helps multiplayer stay more balanced as people will be less able to just buy the best of the best through microtransactions as though the commanders may be a higher rank than a straight up free player, they’ll never be a higher level.  Fame is used to either hire new commanders or increase the rank of the ones you own.  Fame is also provided by missions or battles.  Energy is used to upgrade buildings or purchase materials and can be earned like the previous resources through battles and missions but is mainly earned through conquering new lands.  The more regions you “reclaim” the more energy they provide to you over time.  Lastly gold is used for rarer loot or skipping build times and it is given through daily or weekly activities and seems to be the one resource you can purchase directly once EWO leaves Alpha. 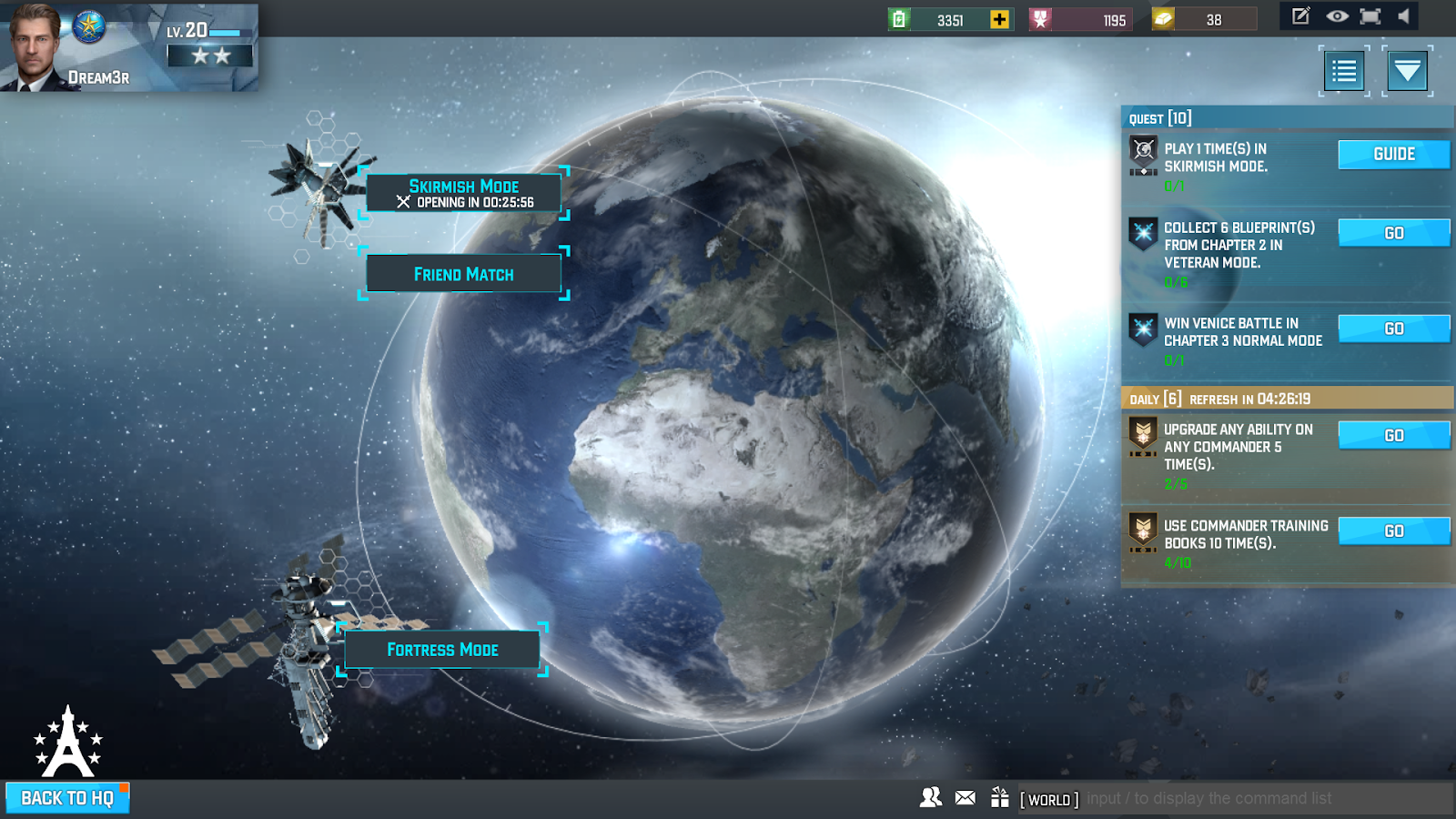 The downfall so far in my time with EndWar Online has been the multiplayer.  There are two modes to it, Fortress Mode and Skirmish Mode.  Fortress is simulated multiplayer in that you fight other players but it’s not live action.  Instead the AI take over for the enemy and you go against them meaning the difficulty is just as, if not easier, than the single player campaign on Normal difficulty settings.  Therefor fortress mode has little to offer to your playthrough and there is hardly a reason to play it more than once.  The other mode, Skirmish Mode, is where the real challenge is…I assume.  See I can’t say that for certain because I have never been able to play it.  Skirmish Mode is only available to play at midnight on the East Coast, or 9 pm here on the West Coast (USA).  Not only that but it’s only open for a set time after that so even though I’ve tried to get on at the right time I’ve usually missed that small point of availability.  I’m not sure if this is just in place for the Alpha to keep server pressure down to a minimum but it’s a horrible idea to have, especially to have take place when most people are getting ready for bed so they can return to their day job in the morning. 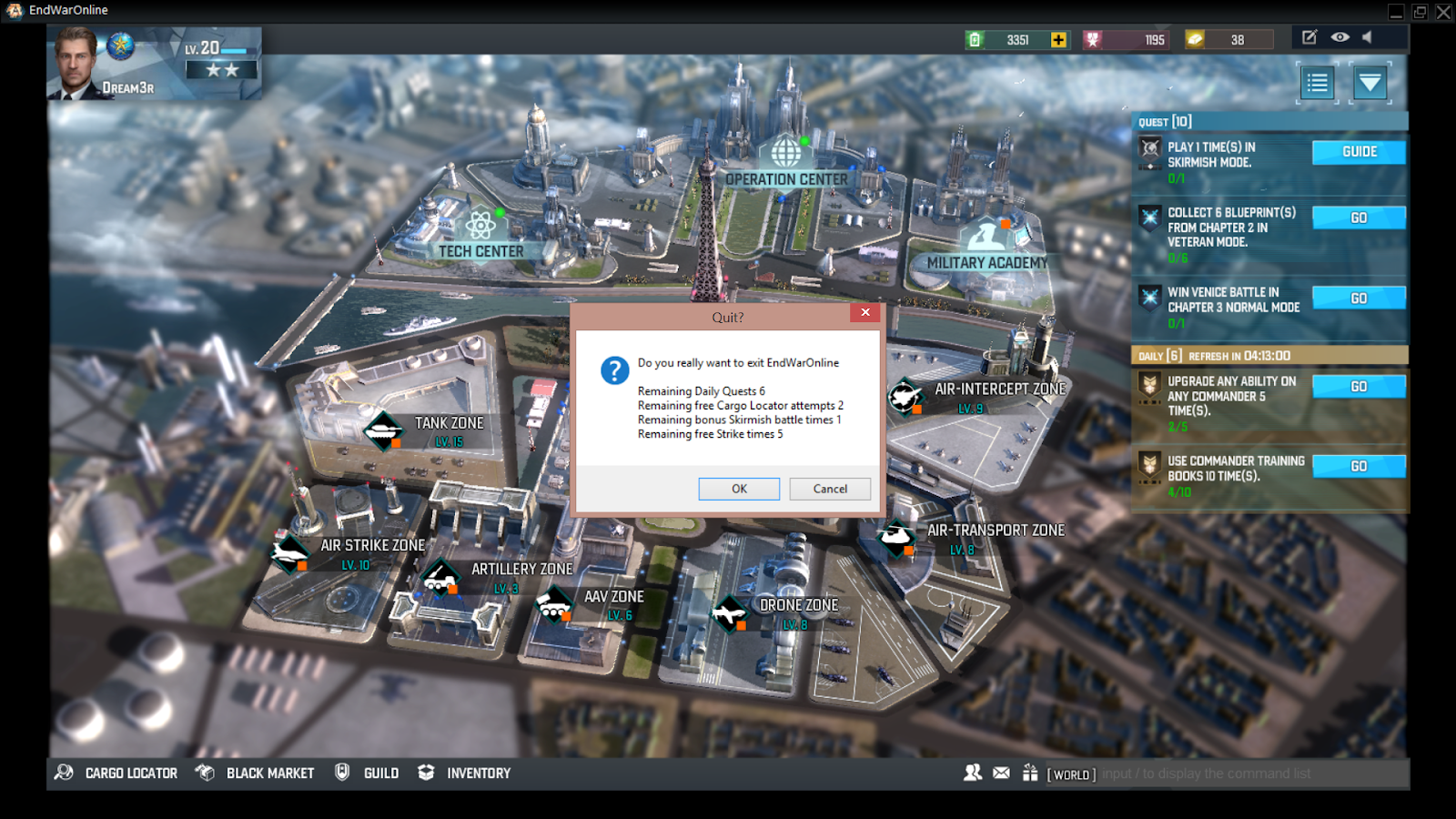 Tom Clancy’s EndWar series remains one that tries to push boundaries in areas many developers would stay away from.  For that I give the series regards but so far though it is an enjoyable experience it’s not a great experience.  The game is (or will be) free to play and you can sign up for the Alpha at their website here.  The screenshot above about sums up what you should expect from the game.  A casual “strategy” game you check on daily for short amounts of time and build up your army before logging off to go play something else.  The gameplay isn’t bad so it won’t force you away but there’s not much there besides the rush you get from collecting loot and getting stronger.  Overall it is worth checking out but I wouldn’t be saving any special time for it.