Strider 1 vs. Strider 2: Which is better?

I recently beat a very interesting and fast paced game called Strider 2. After playing through Marvel vs. Capcom with Strider Hiyru, I started wondering where the character had come from, which lead me to this. Why Strider 2? Well, I tried it along with the first one, and compared them, finding the second to be the best of them. I’ll talk a bit on both and explain why.

Both games are very similar in plot and execution. An evil sorcerer of some sort, the Grandmaster, has conquered the world. In order to put a stop to him, those who resist his regime of evil experimentation and destruction have hired the services of Strider Hiyru. The Stiders are an organization of ninjas, basically, and Hiyru is the best of the best, so much so that he can and has cut through waves of enemies with ease, and considers giant flying warships to be playthings. 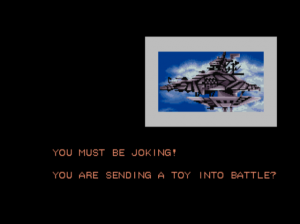 In both games, your goal is to reach the end of the stage while slicing through enemies. In the first game, there was a turbo button that lets you slash continuously, but in the sequel, this was removed- repeatedly pressing the button works fine though. His climbing tools let him cling to the walls and ceiling to get around, giving him much more maneuverability than just jumping would grant. Despite being such a great ninja though, Hiyru could not jump off walls very well or run- both things the second game fixed.

The first game also had quite a few interesting power ups that do not appear in the second, like a robot hawk that flies around and strikes your enemies, an invincibility power up, and a robot that fires shots at enemies and rams them as it follows you. However, while they were interesting, I didn’t miss them going into the second game, because the first was incredibly hard. The fact that you effectively have infinite lives does help, but be prepared to die often. 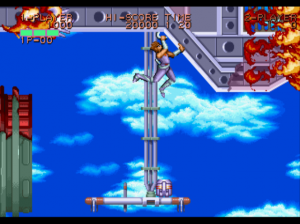 Said second game apparently takes place two thousand years after the first, but it is rather hard to tell- you’re playing as the same person, or perhaps his reincarnation, facing the same villain, who has been resurrected by the evil Strider Hein. The difference is in the gameplay. Now, Hiyru can run, double jump, and in general moves much quicker. They also made the game easier- not by removing most of the things that killed me before, but by making it so you start exactly where you were after dying, even if it is right in the middle of a boss fight. They did remove the bottomless pits though, for which I am grateful. Or, more accurately, the pits are there, but falling just deals a point of damage, rather than death. 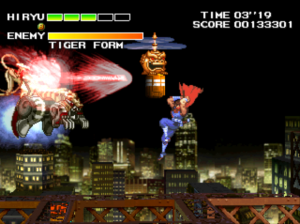 The game is faster, the colors brighter, and the lack of punishment for dying, unlike before, goes a long way to making the game more enjoyable. In short, playing gives the feeling of being like an unstoppable ninja cutting through waves of enemies. Bosses also show up very frequently to spice things up, and the levels actually fly by very quickly. The game is surprisingly short- I could honestly call it “Time Attack: The Game”, which gives me a good incentive to go back to it to try and get a better score, and just to get better than the lowest rank on the levels for dying so much.

In short, the ability to come back exactly where you left off, speed and power of the protagonist, and unlimited lives makes it a very fun and easy game to play. The difficulty isn’t in winning, so much as winning well. And with that in mind, I suppose I can talk about the final battle, because there is nothing to really spoil.

Before facing the Grandmaster, you have to fight Hein. As you would expect, the other Stider uses moves similar to your own, but the boomerang projectiles he throws out give him a ranged advantage- while also meaning he can only attack so many times before they have to return to him. The battle is also on top of a giant mechanical serpent, forcing you to hang on to it like a wall or ceiling when it turns and goes straight up or alters its course. 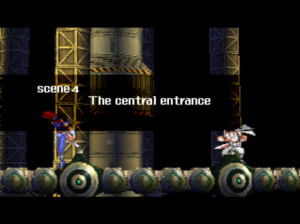 Hein does not attack while this happens since he has to hold on, leaving him open, while you can hit him when you climb. Also, while he can be knocked back by your attacks, don’t expect to make him fall off the snake- he will get back, even if he blatantly has to use infinite jumps to do so.

In any case, after Hein is beaten, you must face the Grandmaster himself, who is… surprisingly easy. Despite being a villain whose servants see him as a god, who view standing against him as suicide, many of those servants put up a better fight. The only real issue is jumping up to his position to actually hit him. He generally fights by throw down energy blasts at you, or by summoning robotic minions to distract you. While these are durable, they didn’t take long to deal with and could in fact be mostly ignored. 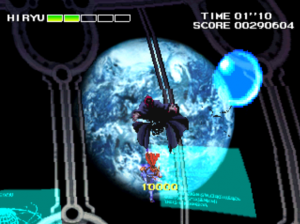 However, after Grandmaster is defeated, Hiyru is thrust into battle with the true final boss, Caduceus. At first I assumed the Grandmaster transformed into a new form, but the creatures he summoned before vaguely resembled parts of Caduceus, so he likely summoned it as a last-ditch effort to stop Hiyru while he recuperates. The monster does seem to be built with Hiyru in mind. 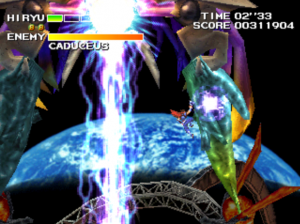 Its only weak point is its head, too high up for Hiyru to jump and hit, so he has to climb the beast’s large arms. The end of the arm has a weapon that shoots fire balls, while the elbow area fires lasers. He can deactivate either temporarily by hitting them enough, and can climb the arms either way. But since the boss’ head is stationary and it aims for you when it attacks, this makes dodging difficult, and would require you to drop down and climb back up again. It also can fire rings of energy down either arm to try and throw you off, or firing a giant laser stright down from its head.

After taking enough damage, it will fly out of sight and then rain a barrage of lasers down at Hiyru periodically, firing rings down both arms to signal it doing so. This attack can be dodged as long as you’re standing in one of the proper spots and do not move. More intimidating is another attack it starts spamming once it has low health, where it makes several harmless green lights.

These hover around the middle of the screen, before all of them turn into projectiles that home in on your location. It will do this constantly, meaning you have to get out of the way incredibly often. It actually seems to me that there is no easy way to get out of taking some damage here, since your goal is to get as close as you can to its head and smash it, putting you with no easy way to dodge as they come from beneath you.

At least, that is how it seems to me, but perhaps there is some way of dodging this attack that I missed. In any case, that is the final bosses of the game. Beating them unlocks Hein mode, where you can play through the game as Strider Hein. He actually makes things much easier- rather than attacking with a blade, he throws out his boomerang weapons. These do a lot more damage than Hiyru’s sword, and let him hit things further away, not to mention they seem to home in on the nearest foe. As you might imagine, this makes the game far easier- so much so that I beat the entire game with Hein in 24 minutes, compared to the 53 Hiyru took. 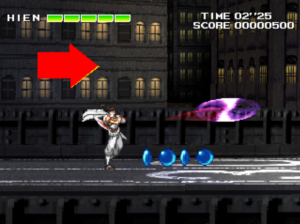 In any case, that’s all I have to say on the Strider games. I really recommend Strider 2 to anyone looking for a fast-paced platformer. I hope you all enjoyed, and I will see you next time.