A Look Back At Mortal Kombat: Shaolin Monks

Today I am taking another look at Mortal Kombat: Shaolin Monks. I did an article on one of the more note-worthy enemies from the game a year ago, but on replaying it I realized it deserves a more in-depth analysis, for reasons both good and bad. The game is very unlike other Mortal Kombat games; while they are fighting games, this one is an action adventure that borrows a lot from them.

The game begins with the end of the first Mortal Kombat, showing a very impressive cutscene where Shang Tsung is defeated, saving the world, and the evil sorcerer and his minions all flee. From there, the events differ from how they happened in Mortal Kombat 2, turning into a huge adventure where the heroes have to defeat the sorcerer once again, and stop him from invading Earthrealm. 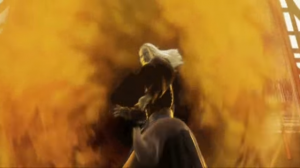 You start with two possible characters: Liu Kang and Kung Lao. Aside from generic moves and attacks, they both have unique special moves based on their attacks from their original games. Liu Kang has his fireball and launch kick, Kung Lao has his teleport and buzzsaw hat throw. Their more generic attacks also differ a bit, but not too much. The combat system is very detailed, however, including throws, directional punches to hit enemies on all sides, air combos, and obstacles you can launch your enemies into to kill them instantly, such as spikes, fires, or bottomless pits.(Though you do not get healed from this, unlike when you beat them normally.)

One of my favorite bits is the weapons you can find occasionally, which do more damage than usual, cannot be blocked, and have unique death effects, like slicing an enemy in half vertically. They can also be thrown, making them lodge in a hit enemy and make them bleed out and take damage over time. The only thing I do not like about the weapons is that you cannot use special moves while holding them or lock on to enemies(which means you can’t block), and that they break. I understand why they break, from a gameplay perspective, but I wish I had some indicator of when it would happen.

And of course, it wouldn’t be a Mortal Kombat game without Fatalities. You learn about them shortly into the first level, and they work like this: As you fight and hit your enemies, you fill up a red circle by your health bar. Once it is entirely full, you can use the R1 button to hit your enemy with a ‘Fatality Stunner’. This stuns the enemy, and you’re prompted to finish them off. Enter the correct sequence for the Fatality, and you’re treated to a short cutscene where they’re finished off by one of the character’s moves.

Later you unlock Mutality, where your character kills all the enemies around them, and Brutality, where their attacks become stronger and they can rip through foes with ease. Each of these gives you an extra circle to fill up as well- so that means you could use three Fatalities, or use up two for a Mutality, or use up all of them for Brutality. I should also point out that when have to use a Fatality on bosses, these are story driven, so all the characters would use the same one, and they use up all of your ‘Fatality meter’. The bosses themselves also have Fatalities if they win against you, a bit of detail I do love.

It should also be noticed that, while you can unlock Scorpion and Sub-Zero for story mode, and Baraka, Reptile, Johnny Cage and Kitana for vs. mode, the two main characters have vastly more unique fatalities than the others. For instance, Liu Kang has eight different ones, while Sub-Zero has three and Scorpion has two. I don’t mind this persay, it just seems a bit odd. Well, I do mind a little, but I will get on exactly why shortly.

Getting combos on enemies and Fatalities gives you experience points, which can be spent on upgrades to your special moves, new combos, and new throws, such as using an enemy as a human shield. Bosses and some objects leave behind points when you kill/smash them as well. The point system actually ties back a bit into the first Mortal Kombat, which gave you points for beating enemies, Fatalities, and so on. Of course, here the points are actually used for something.

Another reused concept is the ‘Test Your Might!’ challenge. In the original game, there were minigames where your character tried to break an object, which gets you more points if you win. Here, they become challenges you need to overcome, such as objects that need to be broken or switches you need to pull. You do this by rapidly pressing the X button to build up a meter, and then you press L1 once you are over a certain amount, different in every challenge, to finish it. I don’t especially like this sort of thing, but I have seen much worse examples in the past, and it never gets too hard to actually complete. 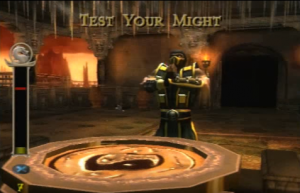 As you may expect, all of the characters are taken(save a secret boss I won’t go into) from the first two Mortal Kombat games, and all of the bosses use special moves taken from that, though sometimes they are applied in inventive ways to make use of the game being in 3D, such as Reptile’s Forceball. In Mortal Kombat 2, this was a slow moving blast that damaged on impact, with an odd ripple effect that didn’t seem to do much. Here, he teleports out of your reach and fires off a barrage of these, flying across the screen rather quickly, and when they hit the ground the ripple effect acts as a small shockwave that makes it more likely to hit you.

Another bit of ingenuity is that many of the enemies you face are ones seen in the background of various Mortal Kombat stages- the Oni from the first level, Goro’s Lair, are shown to be the same creatures watching from the first game with glowing eyes. The Shadow Priests appear around portals in pairs, exactly as they did in the Portal stage of Mortal Kombat 2. The living trees from their stage aren’t enemies, but they can have enemies thrown at them, at which point they will eat them. This is actually necessary, as the trees lowers barriers so you can progress out of gratitude.

In any case, the game does make great use of various features from the first two games, and I’ve talked about many of its good points, so now I’ll mention a few bad ones. Like I said, you can also play as Scorpion and Sub-Zero in the story mode. They do not actually have their own modes; instead, Scorpion plays out as Liu Kang, while Sub-Zero replaces Kung Lao. In animated cut scenes it plays out as normal, and in game cut scenes they simply have the voices of the character they are supposed to be, though in actual gameplay they sound like themselves.

While the special moves are unique for them, same as Fatalities and the like, they much less than the main characters do. And I recall, which I unlocked them, that I was a little frustrated that none of the other characters are accessible outside Vs. Mode. At least they’re playable at all, true, but it is annoying. After all, I thought, if they took the time to program them with their own attacks, special moves, and fatalities, how much more work is really needed for them to be workable in the story mode? As far as I can tell, it would require adding Multalities and Brutalities, but they are otherwise good to go, and in fact it can be done with Action Replay.

Personally, I think it would have been possible if they didn’t give the main characters as many Fatalities as they did, leaving it at maybe four or so per character. I also found Brutalities to be interesting but mostly superfluous- they were never much aid to me. You could argue that they shouldn’t include all of these characters into story mode because many of them would end up fighting themselves at some point, except Scorpion and Sub-Zero are both bosses, and you can have them fight themselves if you get them that far, so there really isn’t an excuse for this.

However, I believe the reason for it probably some sort of constraint. Maybe they didn’t have the time to make more than they did, or space on the disc. It’s also possible they simply didn’t care to add these other characters into the story mode like that, but the fact that they’re equally playable shows that they were very close to that point regardless.

That one qualm aside, there’s very little more me to criticize here. The gameplay itself is great, and the characters are all well shown, even if not to the fullest extent I’d like. And even then, I can under why Liu Kang and Kung Lao get so much focus- they’re the title characters. Of course they are getting more representation. To conclude, it is a game I’d recommend to any fan of Mortal Kombat, or just anyone who likes action adventure games.