Why We Still Can’t Get Enough of Skyrim

You’ve spent hours upon hours on Skyrim itself, let alone the rest of the Elder Scrolls franchise. You’ve deleted saved so you didn’t have to face the harsh reality that you’ve perhaps spent more time playing this single game than you have with your own family these last five years and unbeknownst to your mother, most likely the main reason you haven’t rose from the basement to see her since it’s 2011 release (ha!).

Warning! Spoilers for anyone who still hasn’t played through everything Skyrim has to offer.

Skyrim is undeniably one of the best games of the decade. Few of us played Arena or Daggerfall, but we loved Oblivion. If Skyrim is even better than Oblivion, I don’t even know what to say about it! It has won many awards, including ‘Game of the Year’ from many companies, most notably IGN, our favorite source for gaming.

This fifth installment in the Elder Scrolls series has little to do with the plot, which is actually quite interesting: Two hundred years after the Oblivion Crisis, the world is once again threatened by an all-powerful dragon, Alduin the World Eater, who is prophesized to destroy the entire planet. The game jumps right into this plotline, for the opening scene consists of you in the back of a prison wagon that leading to your death. In the nick of time, ironically, Alduin, the supposed Lord of Destruction, saves you by interrupting your personal execution. Can’t say the same for poor, poor Lokir!

Another feature that makes Skyrim so fascinating is its character creation. This was a milestone for the gaming industry with its complexity. Without mods, you are able to choose from ten races, and aside from cosmetics, this is your main customization at this point. Mentioning appearance though, there is a lot to do here, and can allow you hours creating your perfect character. You are able to choose your own gender, skin tone, hair, and even bodily structure. You may also add scars, age, and different complexions. But the most detailed point here is the facial structure, which allows you to control each feature on your face. This can get out of hand or let you create the “perfect” character to roam Tamriel with and admire your own beauty in arrogance.

Although the main story is wonderful in its own right, it is the side quests that make the mod-less Skyrim so fun and personal. With more than fifty of them, some conflicting, side quests give the game more substance as well as days worth of playtime. When asked about side quests, most people will probably mention the Companions, Thieves’ Guild, Dark Brotherhood, or the College of Winterhold. This is because people love choices, factions, and character development. Not to mention…powers. We love it when we are introduced to the Companions hear the start of the game and later find out we are able to become a werewolf. Or for those malicious saves, to join the infamous Dark Brotherhood. Perhaps you wish to rogue it up and become a thief, or create the Galdalf of all wizards. These are all great quests, but after playing them through a few times, it gets old. 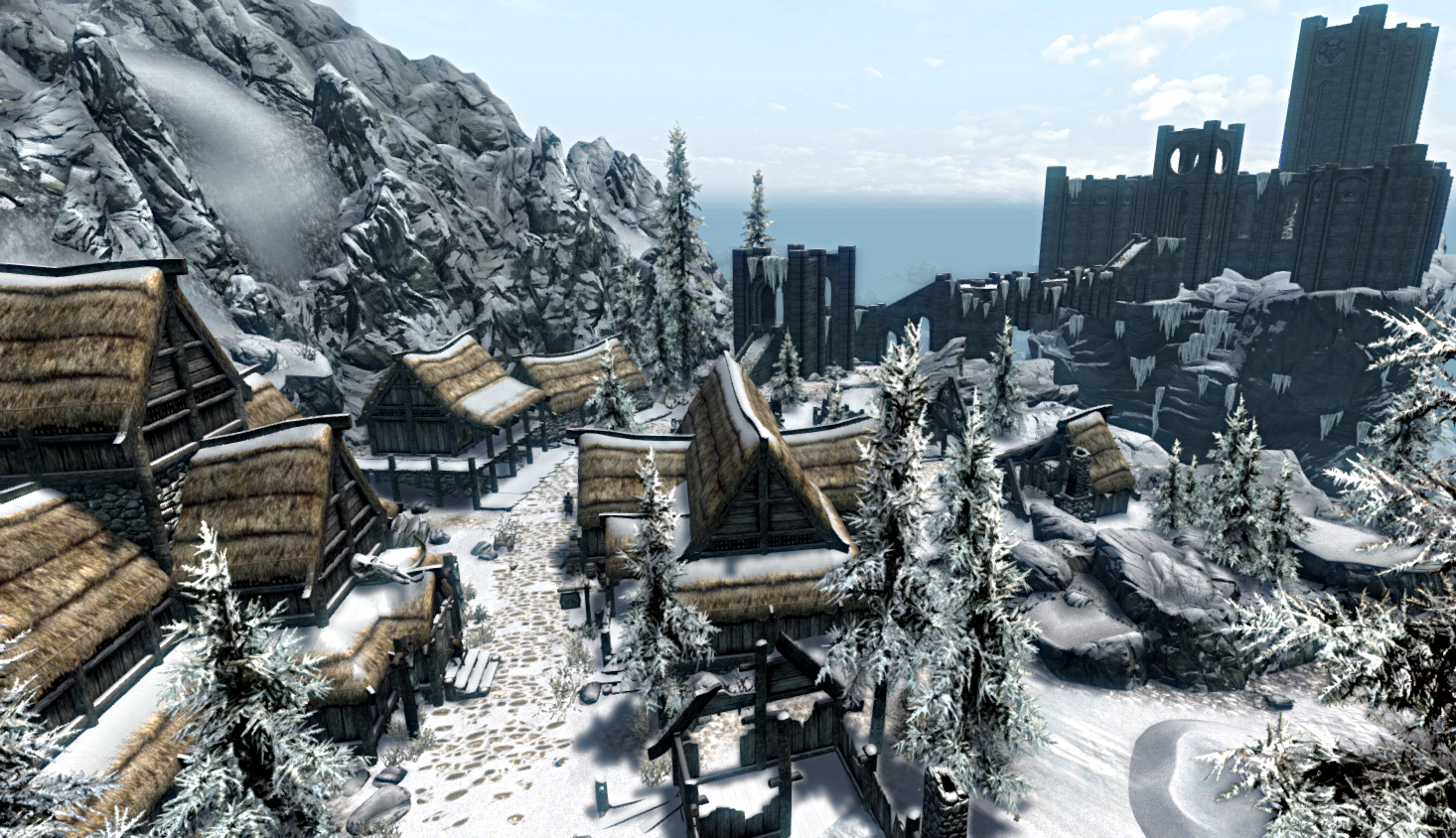 So, we play out a few exciting ones that are often overlooked. Who doesn’t want to explore the dream world of a crazy man in the Alice in Wonderland themed Mind of Madness? (This is reminiscent of ‘The Game’ on Fable III, only with a much more severe setting and consequences). It will also be increasingly fun for those of us who remember Oblivion. ‘Met By Moonlight’ is also a fascinating quest (even more so if you are a longtime Companion) but either way, you are given choices during this quest which will change the course of it. Another crazy quest is ‘A Night To Remember’ where you pass out drunk and wake to find things are a little different than you remember and you just may have trashed a temple, need to go on a treasure hunt, find a goat, and your “fiancé.” Oh well, all in good fun!

If the core of Skyrim isn’t enough, the DLCs are the best to have been released possible…ever. They add not only quests, but new regions, characters, items, skill trees, and more! These three official add-ons keep us hooked:

Dawnguard allows you to become a vampire, for those who are on Team Edward (them are tilting words!) Don’t worry, Dawnguard also adds more for the werewolves on Team Jacob (got ya again!)

Hearthfire is the second DLC for the family man who wants to build a house and start his own family. In time, you can have a mansion with all the works, including hired help, orphaned children, and your pick of any available bachelor/bachelorette in the country. I’m talking to you Vilkas!

Now, Dragonborn is probably the all-around favorite add-on with all that it includes. So many new people, weapons, armor, factions, magic, and much more. Even the ability to ride dragons you conquer!

If it isn’t the DLCs that won’t let us quit, it’s the endless supply of user-made mods. I’m not kidding when I say that people are working every day to create more mods for the fifth Elder Scrolls game. If you can think it, you can find it. Whether you want more classes, armor, cities, or quests, there is a mod available. You’d think after the new Elder Scrolls games came out it would let up a bit, but if it did, would this article really exist?

There are countless reasons we keep playing, and why they are still remaking this game after so long into the franchise. Nintendo Switch evens hints at picking it up! So, my friends, unlike viral memes and videos, Skyrim is one of those world-wide phenomena that we really will never get enough of.