During the Sega-versus-Nintendo console wars of the late 1980s and early 1990s, I was a Sega kid through and through, owning a Master System, a Mega Drive and a Mega-CD. I’ve always appreciated great videogames whatever their system, however, and when the Super Nintendo Entertainment System rolled around, that console featured some exclusive games which I wanted to play but couldn’t, one of them being 1990’s Super Mario World.

The dark days of the console wars have been over for a long time but the memories – along with my collection of necklaces made from the severed ears of Nintendo fans (like I said, dark days) – remain. And now, twenty-six years later, I’ve finally managed to play Super Mario World thanks to the Wii U’s Virtual Console library. 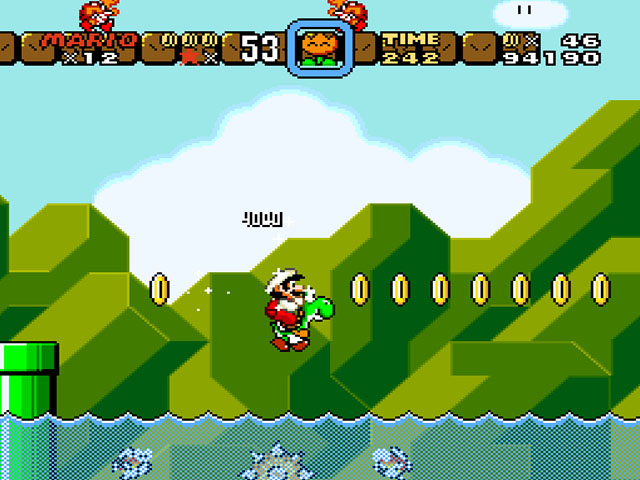 Developed and published by Nintendo and released as a launch title for the SNES, Super Mario World is a 2D side-scrolling platformer starring chubby plumber Mario. When Princess Toadstool is once again kidnapped by Bowser, Mario must make his way across Dinosaur Land in order to confront Bowser and rescue the princess. The game also introduces Yoshi, a young dinosaur whose friends must be rescued from the clutches of Bowser’s seven children, the Koopalings.

The gameplay is classic 2D Mario, remaining faithful to earlier titles in the series: you complete levels by moving from left to right until you reach the goal; you earn points through various means; you overcome platforming sections and enemies; you can walk, run, jump, and swim; you collect coins; you pick up power-ups such as a super mushroom or fire flower; one or two hits can kill you; you have to complete levels within a time-limit; etc.

At the same time, Super Mario World also introduces new features such as a spinning jump which allows you to break blocks beneath you, and the ability to store a power-up which can then be used whenever you choose. New items include the crescent moon, which grants you three extra lives, and the cape feather, which outfits Mario with a cape. And as we all know, there’s never a bad time to wear a cape. 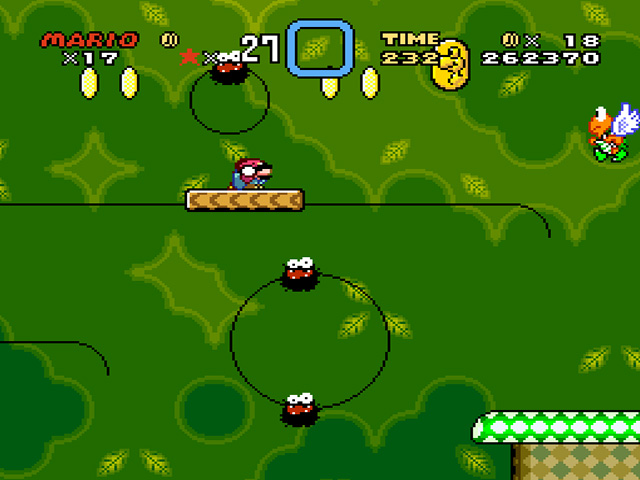 The cape is an extremely useful item which allows you to not only fall at a slower speed but also launch yourself into the air and, as long as you can get the rhythm of the controls right, fly along at a steady height. In some levels this technique allows you to bypass many obstacles and enemies, and can also help in discovering secrets.

And then of course there’s Yoshi, a new character and gameplay mechanic all rolled into one, and a character who’s become a regular fixture in the Mario universe since his debut here. In Super Mario World, Mario can ride Yoshi, and the dinosaur can fire out his tongue and pull in enemies, whereupon he swallows them. This mechanic is expanded upon when it comes to the koopa enemies, as koopa shells of different colours grant Yoshi different abilities.

Dinosaur Land is separated into seven worlds, including Donut Plains, Vanilla Dome and the Forest of Illusion, with each of these worlds containing a number of levels and a boss within it. There’s also a large number of secret levels, so all in all the game offers a sizeable amount of content.

The levels are filled with enemies varying in design, attack pattern and difficulty, and there are plenty of instant-death pits to worry about as well. In fact, the game becomes pretty tough as it progresses, so even players with a lot of experience with platformers might find themselves struggling at times – I know I did. Some levels differ from the standard set-up by having the screen auto-scroll or by taking place underwater, while ghost-house levels can act as minor mazes as you try to figure out the correct path to the exit. Other levels increase the pressure on you in different ways, such as having respawning enemies constantly dropping or being fired onto the screen. 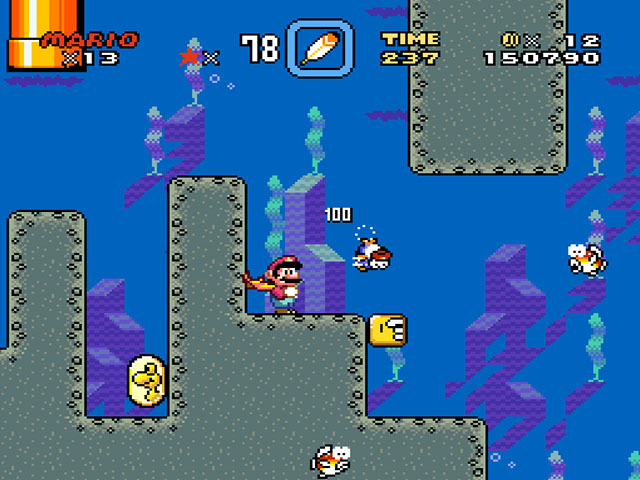 When between levels, you navigate an overworld map of Dinosaur Land, your path through the map’s seven worlds being unlocked as you complete levels, which you’re then allowed to replay whenever you choose. Some levels are marked with a red circle rather than the usual yellow one, and this signifies a level with two exits: a standard exit leading to the next level, and a second, hidden exit leading to a secret level. Some of these hidden exits are very tough to find, increasing the game’s replayability – if you’re inclined to put in the effort to find them, obviously.

Super Mario World was a fantastic-looking game at the time of its release, and although the graphics have understandably aged to a degree, the visuals remain bright and colourful, the overall art design charming and cheerful. Although after dying on a really tough level for the thirteenth time in a row, you may come to see that cheerfulness as a mocking, deceptive veneer covering the ruthless bastard of a game beneath. At least until it eventually wins you over again, anyway.

The same joy and charm found in the visuals is also present in the music, with composer Koji Kondo doing a great job complimenting the visuals, from the lively music of the bright, open-air levels to the relaxed and dreamlike underwater music, and the more sinister and ominous track which plays over boss levels. And then there’s the way in which the music always speeds up when your level timer falls to 100 seconds, adding a sense of urgency.

Regarding technical performance, there were a few instances of slow-down when too many things were happening on-screen simultaneously, but these moments weren’t too severe and never lasted long. Apart from that, the game ran smoothly, with no other problems. 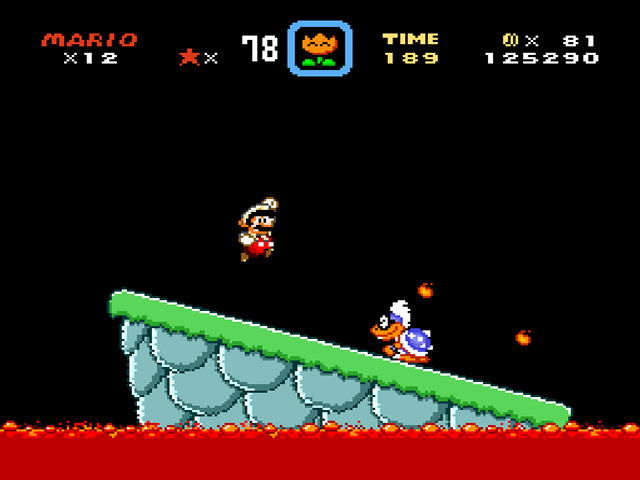 While I enjoyed Super Mario World for the most part, and while for decades Nintendo games have frequently been known for their finely tuned gameplay, I had two problems with the game which often seriously hampered my enjoyment of it.

Firstly, I found that the standard jump button didn’t always feel responsive enough, leading to a number of unnecessary deaths; and secondly – and this is the same problem I’ve had with other 2D Mario platformers – I hate the fact that you’re forced to hold down a button to run, as it’s something you’re required to do a lot of the time, leading to the necessity of holding down the run button while frequently pressing the jump button, both with the same thumb. To me it feels like I’m having to hold down a button just to make Mario move as responsively as he should in the first place, and it feels unnecessary and awkward when combined with jumping, the timing of which is of course frequently vitally important.

I realise that I’m in the minority when it comes to the above two complaints, as evidenced by Super Mario World becoming not only one of the highest-selling videogames to date, but also making frequent appearances on “greatest videogames ever” lists. (For whatever those are worth). But that’s fine, I forgive everyone else for being wrong.

Kidding aside, if you haven’t played Super Mario World before, should you make the effort to do so now? Well, if you’re not really interested in 2D platformers then there’s likely nothing here that will change your mind. However, if you think you’ll enjoy it then go for it, as it’s a colourful, charming and challenging game packed with content and featuring some enjoyable gameplay mechanics and a generally high level of polish.