Today I am looking at a very interesting Mega Man fangame, called Mega Maker. As the name implies, it is for Mega Man what Mario Maker is for that series- a way for you to create your own levels, hazards, and so on for Mega Man to traverse. While not an official Capcom work, I would still recommend it to any Mega Man fan.

Firstly, the fact that you can make your own levels, with several elements taken from the first six Mega Man games is itself simply incredible. The game also has a very charming tutorial where Dr. Wily himself explains how to make a level- though Dr. Light appears partway through to try and temper his obvious intent to have the player make incredibly harsh stages to kill Mega Man with. Still, Wily does draw the line at just not having any ground for Mega Man to walk on- that wouldn’t be sporting! 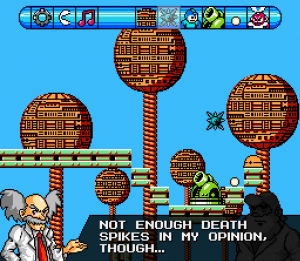 He also chastises Dr. Light for trying to encourage you to reward those who play your levels with lots of power ups and the like, making it too easy. While Light’s bias is a lot less apparent than Wily’s, it is still there. Of course, as the level designer, how hard or easy you make it is entirely your choice. Its worth noting that unlike typical Mega Man levels, you can have yours end differently- there doesn’t need to be a boss. You could simply have a weapon item like Mega Man picked up in the first game, or a party ball that he shoots to end the level.

Speaking of bosses, you have twelve to choose from currently- two from each of the six games. Sadly you cannot make boss rush stages just yet- while it is possible to place more than one boss, if one is killed then the stage ends. However, you can alter what music plays when the boss arrives, where they appear, and what hurts or doesn’t hurt them. You can even make them entirely immune to attack- which suited my purposes just fine when I made “Hunted and Disarmed”, a level where you have to run to the finish while being chased by an invincible Napalm Man through numerous hazards and enemy bombardment. 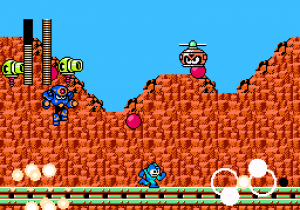 Similarly, you can also change Mega Man’s weapons. Aside from the typical Mega Buster, you can determine if it charges, what the charge shot looks like if it does, if he can slide, and what other weapons he has, if any. You can even make him run in with no weapons at all! There is also the utility ‘weapons’ like the Rush Coil, letting him bounce higher, the first game’s Magnet Beam, letting him make temporary platforms, and the Rush Jet, letting him fly- and of course, there have been levels revolving around that, changing the entire genre from a platformer into a shoot-em-up.

The game also has two unique weapons to it based on Super Smash Bros, called Nado and Shine. Shine is a replica of Fox and Falco’s Reflector special move, where they cover themselves in a glowing shield that knocks projectiles back to their source. It does the same here, allowing Mega Man to harm enemies with their own attacks. It could also be used to make him a purely defensive character in a level.

Nado, on the other hand, is a replica of Meta Knight’s Mach Tornado move, letting him spin through the air or on the ground and damage anything he touches. While I haven’t had much use for the trick myself, I have no doubt that enterprising and clever players have put it and everything else to some novel use. Experiment with everything!

Oh, and it is also notable that whatever goes in Mega Man’s first weapon slot becomes his primary weapon- and thus has unlimited energy. Alternatively, anything uses up energy in one of the secondary slots, even the Mega Buster. This could be used to create a level where Mega Man has to primarily dodge foes rather than destroy them, for instance, and save his power for where he definitely needs it.

As for enemies, like the bosses and items, they are drawn from the first five Mega Man games, including giant Big Eyes and the floating Foot Holders from the first game. Big Eyes make good minibosses of sorts, while Foot Holders, unlike in the first game, will never shoot at you, and exclusively work as moving platforms. Tellys from Mega Man 2 also show up, and you can include holes in the background that spawn them. There are of course many other enemies, so keep looking and experimenting.

You can also include checkpoint flags, which will be where Mega Man respawns after he runs by it, teleporters that take him between two points- though for whatever reason he always comes out of them jumping. There are also obstacles that can only be destroyed by whatever weapon you pick, water for underwater sections, time bomb platforms, lasers, disappearing blocks, and pretty much every other aspect you might hope is there.

Well, almost everything- as I said, there is only 12 bosses, 2 from those six games. The bosses from the Wily’s Fortress levels also are not here yet, but the game is being updated over time- an update soon will add Bass and Protoman as playable characters, with their own capabilities, and doubtless future updates will add more bosses, enemies, platforms, and other such features, allowing players to create even more amazing levels than they have already. Or just silly things like this. Poor Cut Man. 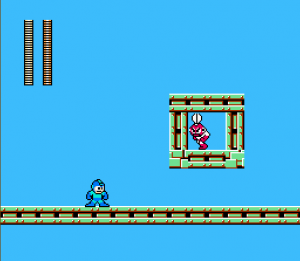 Personally, I absolutely love the idea of this game, and even if it is unfinished, it is still amazingly fun and inventive even in this state, and it will only get better from here.

2022 is going to be an incredible year for games. After 2021 proved somewhat disappointing thanks to the ongoing COVID-19 pandemic (and various other...
Read more
Editor's Picks

Whatever else you can say about 2021, it’s probably been a slightly better year than 2020. While things have definitely not yet gotten back...
Read more
Best Games

World War II is a conflict that sticks indelibly in the popular consciousness. Although this war was arguably just as morally grey as others,...
Read more
Editor's Picks

Ubisoft has come under a lot of criticism in recent years for its formulaic open-world map design. In most Ubisoft games, you start off...
Read more
Editor's Picks

“Talent borrows, genius steals” is a quote most often attributed to famous wit Oscar Wilde, although he’s had so many quotes attributed to him...
Read more