If Starship Troopers was a videogame, Infested Planet would be it.  It’s a game about facing thousands of enemies in every level, likely millions by the end, and blowing them all to smithereens.  You have a small variety of unit types, support buildings, and research facilities and you must use them all to your advantage in order to prevail against the overwhelming odds.

Gameplay – Out Numbered A Thousand to One In most missions you’re given a small squad and a single base and thrown into a map with several alien bases.  Each base can spawn hundreds to thousands of units and they will try to overrun you in sheer numbers.  There are several sub goals given throughout the game often varying slightly from one another but more often than not the goal is to capture all the bases and push back the alien force.  As you take more bases or as time goes on, the aliens will start to evolve.  On higher difficulties this rapid evolution can be difficult to keep up with but it is what offers the challenge of gameplay.  At first you may be able to get away with simply calling in a few attack helicopters to support your basic riflemen and capture a base or two but as the aliens adapt you will have to change your tactics before you begin to lose ground.  It’s a gameplay mechanic that will keep you on your feet until you trap the aliens into a corner, which even then some evolutions will make them get around your forces. 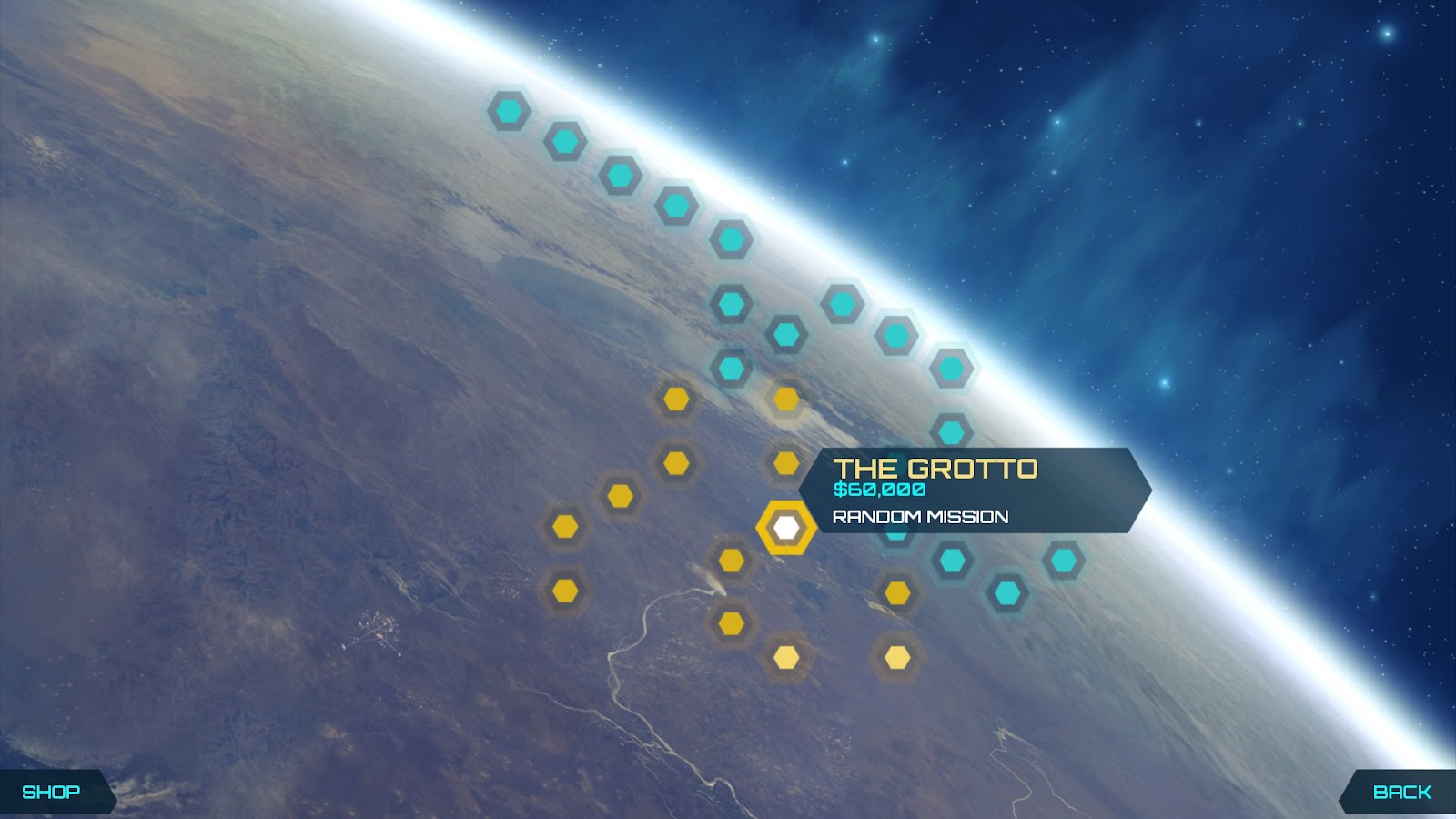 Skirmish- is a custom game mode where you select a map and the specifics of what you have available to you and how the aliens will behave.  It’s a nice feature to have but it’s not one I personally used more than once.

Campaign- is where you will be spending most of your time.  In addition to the tutorial and story missions which are shown in blue, there are also alternate game types such as survival or vanquish.  These extra missions are generated randomly based on the general area that the mission takes place in.  These layouts while all equally functional can offer a large variety in difficulty.  Basically when it comes down to it the more ways you can be surrounded and the more aggressive the aliens are in a sector, the harder it’s going to be.  Luckily in campaign mode you earn money which can be spent on different units and bonuses to make each mission easier.  Some of these upgrades are temporary and others are for a single mission.  The further you get in the campaign the more money you can earn but as you buy help from the shop the prices will continue to rise as well.

Weekly Challenge Mode-  a multiplayer mode in which every week a different set of maps are provided with different difficulty levels.  Players compete indirectly by trying to get the highest score in the shortest amount of time.  In a sense it functions similar to skirmish mode except you don’t set the rules.

Why to Play – Turtle Based Strategy Due to the mechanics of the game more often than not rushing is going to get your units cut off from one another and you’ll end up having to recapture bases you lost.  Infested Planet is more so about mid length battles where you capture a point and then look around to see what is the best way to build up your forces and push further along.  Do you build a research facility that gives a general boost to all your units/buildings?  Do you build up defenses and try to hold out until you see an opening?  Or do you upgrade your units and launch an assault hoping you can capture a base before you get surrounded?  While you complete the story mode and unlock units you will find your strategy constantly changing but once the story is complete and you have every building/unit available it comes down to having a few strategies in place and deciding which one you want to go with for every randomly generated mission from that point forward. 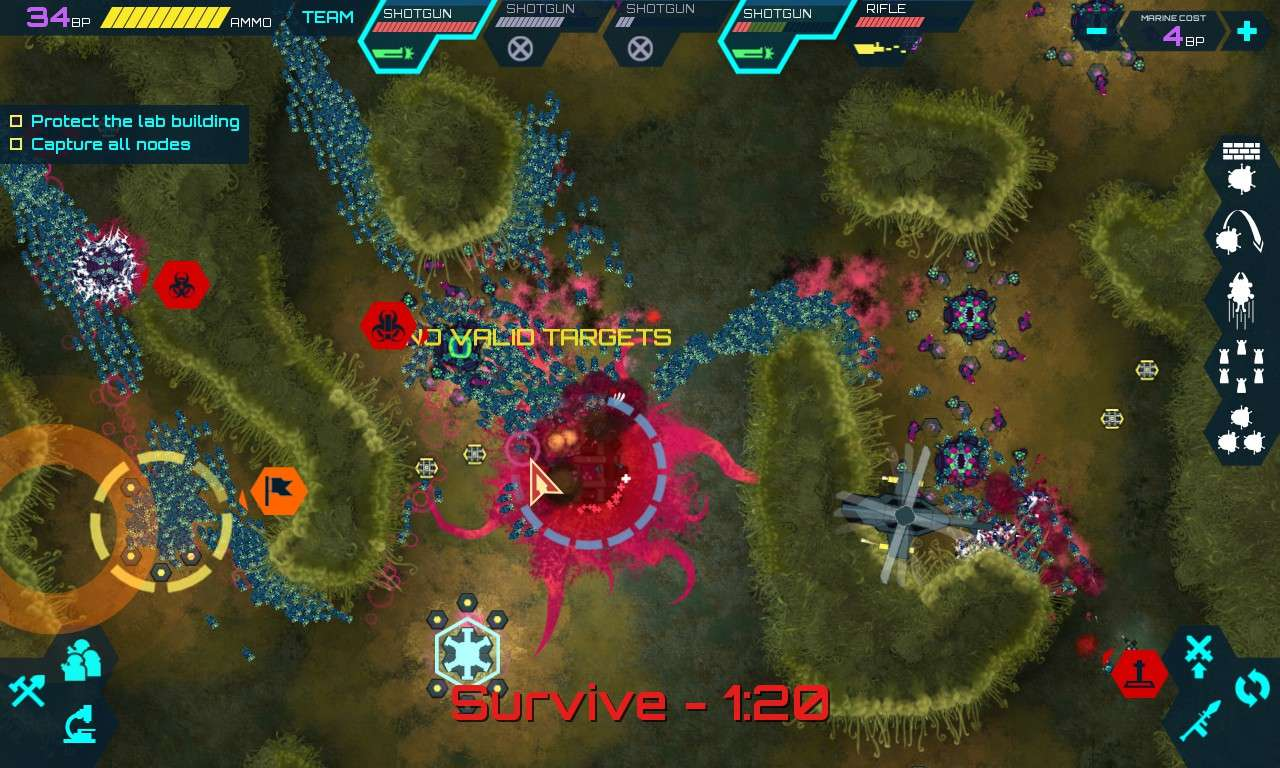 Each match fills similar to a MOBA in that you start with little and work your way up rather quickly.  When you take on different challenges and finally get enough points to build you super task force, or start building up bases filled with defensive weaponry the rush can be enjoyable but this can get repetitive after a couple missions.  In the end Infested Planet is a fun, casual strategy game that is meant to be played a little bit at a time.  What it does it does well and at the price of a typical indie game like it is, you’ll get your money’s worth.