Today I am looking at the final bosses of the Nintendo 64 Spider-Man game. While it isn’t related to a movie and thus one I had forgotten, I took another look at it recently and the finale of it certainly stands out. So does the plot in general, since it isn’t based on a movie, but I’ll try to move on to the ending fairly quickly. 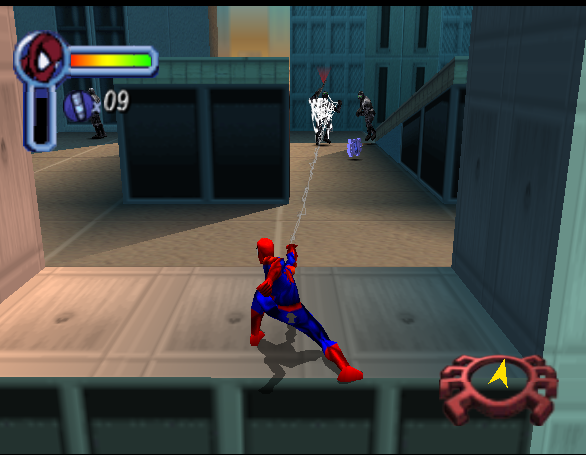 The game starts at the Science Expo 2000, where Doctor Otto Octavius, formerly supervillan Doctor Octopus, is showing off some invention he made. Both Peter Parker and Eddie Brock are there taking pictures when Spider-Man shows up and steals the technology the good doctor is showing off. Naturally, Peter Parker is Spider-Man is this is an impostor, and one he intends to capture.

Eddie on the other hand does believe this is the real deal, and the false Spider-Man smashed his camera, basically ensuring he just lost his job as well. All of which makes him incredibly angry at Spider-Man, enough so to transform into the villain Venom via the alien symbiote bonded to him, making him even stronger than Spider-Man is himself. And while all this is going on, two shadowed figures are unveiling an evil plan that involves flooding Manhattan with some sort of fog.

After that the game begins with you playing as the real Spider-Man jumping from one rooftop to another while the police, assuming he committed a crime, are trying to bring him in, all while he is rushing to stop a bank from being robbed. Stopping the impostor is further delayed when he has to stop Scorpion and the police catch up as a result, leading to a level where you’re chased by the cops and a police helicopter that goes as far as to snipe at you and fire missiles. 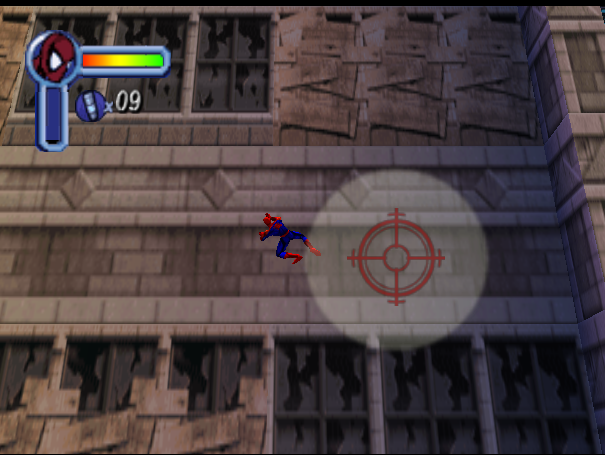 All of this delays Spider-man enough that the true culprits manage to steal something else they need, and since Spider-man showed up to stop them, he looks guilty. And just to make things even worse, Venom kidnaps his wife, forcing him to chase Venom into the sewers to rescue her and costing even more time.

Eventually he does stop Venom, and reminds him that he saw Peter Parker there at the Expo, so clearly the one doing the stealing was an impostor. Realizing he’s right, Venom teams up with Spider-man to stop whoever is causing the trouble… but it isn’t long before things go wrong. They head to the Daily Bugle to try and find the identity of the impostor, but Venom goes off on his own because he senses another villain nearby, Carnage.

Compounding the issue, the whole building is filled with symbiotes like Venom and Carnage, trapping people so they can make them their hosts. Spider-man manages to fight through the building and spots his impostor, who is revealed to be the master of illusions, Mysterio. Despite Mysterio’s best efforts, he was beaten and Spider-man found out where the real masterminds are- Warehouse 65. There a massive underground base lay, where Carnage is producing more and more symbiotes to conquer the world with.

Spider-man soon finds the two behind this plot- Carnage and Doctor Octopus, who plan to take over the world by turning everyone into presumably subservient symbiotes under their command. Venom shows up just in time to battle Carnage, leaving the doctor to Spider-Man. And so, we come to the final battles of the game. Doctor Octopus wisely doesn’t fight Spider-Man directly, but instead protects himself with a barrier that stops your attacks, but lets his own through. 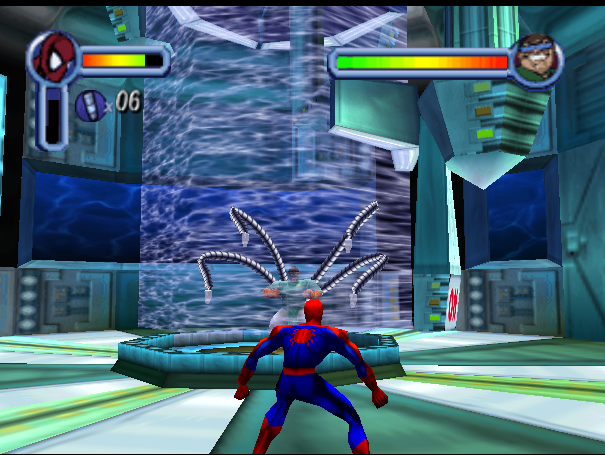 At first he will use only a well telegraphed attack with all four of his tentacles, easy enough to dodge, but there is nothing you can do to stop him. However, a switch will soon reveal itself that Spider-Man can press, diverting some of the power from his barrier into an energy wall along the arena. Once you activate all four switches, the barrier will fall, but in the meantime you are making more and more walls, making it easier for the doctor to hit you.

After the barrier is gone he will be helpless and Spider-Man can move in to punch him. After a few hits the barrier will be up again, and he will attack more quickly and less obviously, stabbing at you with two of his tentacles. After the barrier goes down again, he will be reduced to low health and now he will use all four in fast lashing attacks, keeping you on the move.

However, I don’t find this to be an especially challenging bout. After beating the doctor, he faints, and Spider-Man sees Venom flung aside as Carnage prepares to fight him next. This battle is a bit more hectic- Carnage can move about freely, unlike Doctor Octopus, and the middle of the arena is taken up by a large sonic emitter, showing a visible dome. Symbiotes like Carnage are only weak to fire and sound, as Spider-Man notes, so this thing was likely here in case Carnage tried to betray the doctor. Carnage will avoid touching it if he can, and is capable of jumping clean from one side of it to the other. You can run through it yourself, but if you do it will hit you with constant damage. 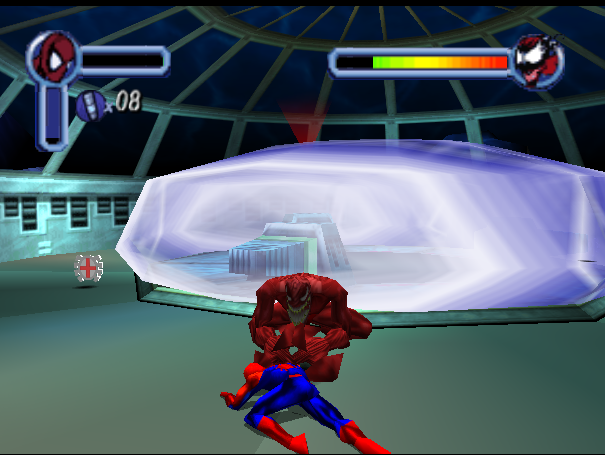 The room is also very small, meaning if you jump too high Spider-Man will stick to the ceiling and leave himself open. Carnage will throw bits of himself at you if you are two far away, and like the other bosses, he is basically immune to your webbing and cannot be tied up. Getting in close is also definitely not a good idea, has he can morph his arms into axes and other weapons for brutal close range attacks. On top of that, he seems to take no damage from you at all.

However, what you can do is knock him into the sonic emitter, stunning and damaging him in much the same way it would you. This is the only way to hurt him, and also gives you a short time to find any power ups you need around the area. He will try to escape the emitter while it stops to recharge, but if you hit him with webbing during the time you can potentially hold him in place so he takes even more damage.

With Carnage taken care of and knocked unconscious, Spider-Man pats himself on the back for a job well done- but it seems the symbiote itself wasn’t done with him, abandoning his host to attach itself to Doctor Octopus. The unconscious doctor is transformed into Monster Ock, our true final boss. This disturbing fusion doesn’t seem to possess the intelligence of either of the villains, however, only capable of screaming “Die!” in a warped voice while smashing everything it can reach with its eight limbs, quickly causing the base to start to collapse on itself. 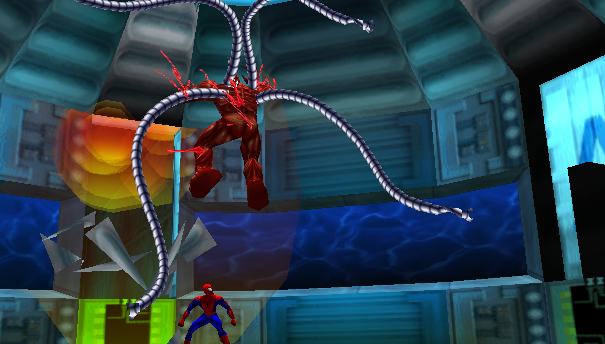 This neatly takes care of the issue of how Spider-Man can handle an even more deadly version of Carnage, and radically alters the final battle. Rather than being a straight up battle, it is instead a chase, with Monster Ock hounding Spider-Man as he tries to get out before the entire base goes down. Thanks to the tight corridors and many obstacles such as doors, Spider-Man is slowed down while the boss isn’t slowed in the least, smashing through anything in their way.

Actually, the corners and walls are the only reason he can survive- Spider-Man can barely stay ahead of them via constant jumps and swings- actually running will get you caught and thus killed quickly. However, as long as you keep a clear head and can keep something of a lead, you should be able to escape. The bar on the top of the screen will tell you how close he is to you, while the radiation meter on the right shows how close the base is to exploding- and how close you are to escaping.

In the end, Spider-Man manages to get out just in time to avoid a massive explosion, which knocks out the symbiote and lets Spider-Man flee just before the whole facility comes crashing down. And so, the evil plot to conquer the world with symbiotes is stopped, and we see the game come to a close. The ending always catches my attention because after facing both of the villains, one easy and the other much harder, you’d think you’ve reached the end- only for one last unexpected and game-changing hurtle to be thrown at you in the form of the nightmarish Monster-Ock. Thanks for reading, everyone, and I’ll see you next time.