In this day and age, with hacking and the theft of data – whether it be cloud-based or physically stored – being more prominent and widespread than ever before, protecting that data has taken on an even greater level of importance. Rather than being an afterthought, computer security has well and truly been forced to front of people’s minds. Accordingly, a sizeable industry has sprung up around providing relevant security solutions.

iStorage are one of the smart companies who have seized this opportunity. This British outfit were only founded back in 2009, but in a relatively short space of time they’ve risen quickly, built a sterling reputation, and now provide equipment for government departments, defence departments and financial institutions.

They also offer solutions for regular consumers, and that’s where the diskAshur PRO2 comes in.

The diskAshur PRO2 is a portable USB 3.1 hard drive. It’s available in a range of sizes, from 500GB all the way up to a mighty 5TB. It comes with a keypad on the front, and doesn’t require any software to set up and start using.

On their own product page, iStorage prominently feature a quote from another review of the product: “whereas the old model was really secure, the new model is goddamn bats**t crazy secure. And then some.” That’s an abrasively bold statement to make, and it’s doubly bold of the product’s creator to feature it so centrally. iStorage are clearly extremely confident in the diskAshur PRO2, and it doesn’t take long to see why. 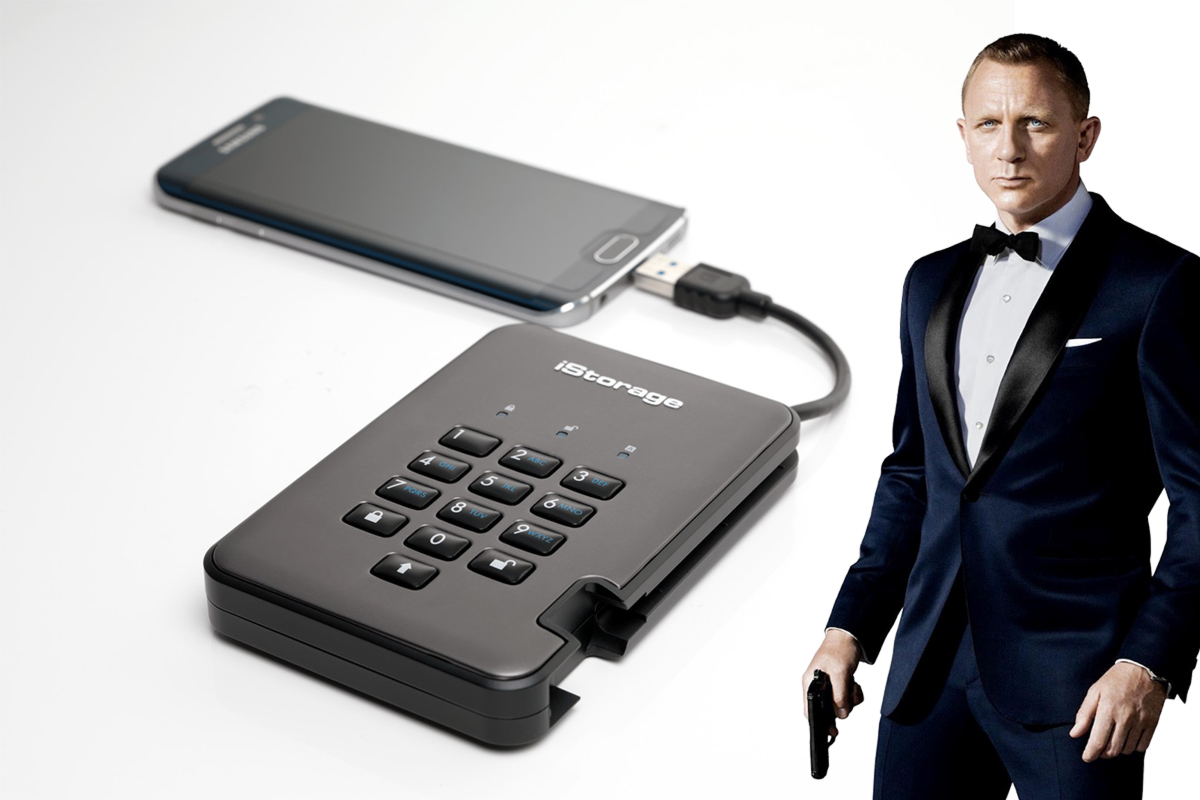 The diskAshur PRO2 really is incredibly, ridiculously secure. Let’s take a look at just some of its key security features:

What this cool-sounding acronym actually represents is extremely powerful encryption. In terms of the software, a series of encryption keys are randomly generated by multiple algorithms. The microprocessor at the heart of this operation also has the capabilities to freeze everything if it detects a hacking attempt, with a restart only being possible by physically pushing the ‘On’ button.

Not only that, but it also protects your data from physical attempts to access it, with mechanisms in place to combat external tampering, and even laser attacks. A James Bond villain would struggle to break into this bad boy.

Brute force attacks are basically just large-scale trial-and-error attempts to break some kind of security, most often a password or PIN.

The diskAshur PRO2 comes with solid protection against these rudimentary attacks: after five incorrect PIN attempts in a row, it will freeze, and can only be unfrozen by physically disconnecting and reconnecting it from the USB port. The security scales upward depending on how many attempts have been made, culminating in eventually deleting its encryption key and locking itself, effectively deleting all your data, after fifteen unsuccessful PIN attempts (it assumes at this stage, and probably fairly, that it is being hacked).

This isn’t the sexiest feature in the diskAshur PRO2’s arsenal, but it’s a welcome one nonetheless. You can set it to automatically lock after a certain amount of time without being used; a potentially vital inclusion for the forgetful amongst us.

This isn’t quite as exciting as it sounds! The device doesn’t explode with the force of a bundle of C4, nor does it make a soft ‘poof’ sound before emitting a trail of smoke, like a Mission: Impossible movie.

It does, however, essentially accomplish the same thing. You can program a certain PIN into your diskAshur PRO2 which, when entered, will delete everything on the device, including all your data, before creating a new encryption key.

This is another layer of welcome protection to actual, physical attempts to access your data. The ‘Tamper Proof’ side of it comes from a layer of resin which coats the components; if someone tries to use the components, the resin will automatically damage them, hopefully making them useless. The resin also fulfils the ‘Tamper Evident’ side of the feature, in that if someone has been trying to directly access the components, it will be extremely easy to tell.

That’s by no means an exhaustive list of the security features that come with the diskAshur PRO2, but if we were to list all of them, we’d have no space in the review for anything else! Suffice to say that iStorage are clearly top-level experts in the field of cyber security, and they’ve included everything you could ever have dreamt of in this device.

In terms of its physical appearance, the diskAshur PRO2 looks satisfyingly unremarkable; it won’t immediately stand out as the top-of-the-line security product it really is. At 124 x 84 x 20mm (or 28mm depth for the larger versions), and weighing only 237g, it is also extremely portable, and can easily be carried in the pocket of a jacket or trousers, as well as inside a bag. The keys on the keypad are nicely spaced and raised off the surface, and are wear-resistant, which both ensures longevity for your device, and doesn’t clue a hacker in to the most commonly-pressed buttons.

Finally, we come to the actual performance levels. After all, however secure a device might be, if it runs about as quickly as treacle off a spoon then you’re probably not going to use it. Well, there’s good news here too. iStorage promise speeds of 148MBps (read) and 140MBps (write). Some basic benchmarking tests back up those claims, and in simple usage the device seems to run extremely smoothly, with no apparent slowdown despite its bountiful security features.

The first diskAshur PRO was already hailed by experts from across the cyber security industry. With the new edition, iStorage have truly surpassed themselves. If there’s a more feature-packed security device out there right now, which also retails at a reasonable price, and is as user-friendly as this one, then we’d love to see it. Simply put, however, we don’t believe it exists.

If, like many people, security concerns over your data are often at the front and centre of your mind, then take a long, hard look at the diskAshur PRO2. We genuinely can’t recommend it enough.