Today I am looking at a rather interesting first-person shooter called Goldeneye: Rogue Agent. As the name may imply, it is a game based in part on the James Bond movies- but it doesn’t actually have anything to do with the famous Goldeneye video game, nor is James Bond himself your character- instead, you play as a former agent of MI6 that was kicked out of the organization for his brutal methods.

The prologue explains that after being shot in the eye by the famous criminal Dr. No, the agent became increasingly aggressive and violent, until they had no choice but to remove him from their ranks. The first level bears this out, where he is working with James Bond to stop another criminal, Goldfinger, from destroying Fort Knox and ruining the world’s economy. The mission starts off badly, with the helicopter the agent and James Bond are in crashing, and then falling right on top of Bond, regardless of what the player does. From there, the level continues and you find out the basics.

Obviously there is ducking, firing, reloading, and getting acquainted with your starting weapon- a simple pistol with 12 shots, but never runs out of ammo to reload it with, and grenades, which you start out with three of. The pistol is undoubtedly one of the weakest weapons in the game, but it is better than nothing, and can take out the weaker foes, especially if you can pull off headshots. 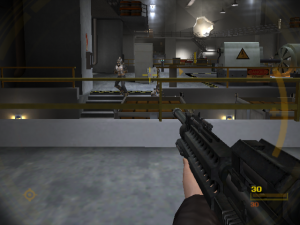 After you beat an enemy, you can take their armor, which basically acts as a second health bar, and their weapons. You can also pick what hand to use them in. I generally use them in the right hand, since that frees up grenades, but you can always drop what you’re holding if you must to use them. There are also more powerful two-handed weapons, but these generally are rarer and thus are harder to replenish their ammo.

You can also punch your enemy or smack them with your weapon at close range, which stuns them after they are hit enough. After that, hitting them again will knock them out- or, you can take them hostage. Doing so uses up your left arm in holding them still, but your right hand can still use whatever you are holding, and the enemy serves your shield, absorbing whatever shots hit you. Depending on the foe, they can last quite a while, and can be thrown at other enemies when you don’t need them, knocking them over. They may also do this on each other for protection if they are feeling desparate. 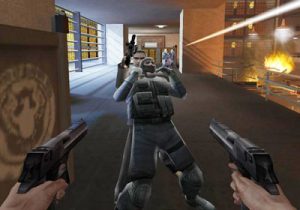 There are also traps throughout every level that can be used by the intelligent player to kill enemies much more efficiently than guns or punches would manage. For instance, in the first level, why fight two goons in a narrow passageway when you can have a gold cart run them over? Just bear in mind that it is possible for them to be used on you. Unlikely, but still possible. Make very sure the way is clear before proceeding past the area where they activate.

Moving on, after you reach the end of the level you see a cutscene where the bomb is set off regardless, meaning you were too late- only for it to be revealed that the entire level was a simulation, and that the agent and Bond are fine. However, it seems that MI6 was not pleased with your methods throughout the level, and blame the ‘death’ of Bond on you- though how that is the case I am still not sure. Perhaps more could have been done to get him down from that helicopter? Regardless, the agent is fired- but we see that he already has a new employer in the form of Goldfinger.

The second level starts with the agent, now going by the codename Goldeneye, working for Goldfinger and against Dr. No, who is planning to wipe out Goldfinger’s operations and take his resources for himself. In particular, he is after a new superweapon called the OMEN, which when perfected would be a mass-produced rifle that can obliterate people, leaving behind nothing but their inorganic clothes and tools.

As such, the second level has No’s forces storm Goldfinger’s labs to take the OMEN, and you have to escape the place yourself, killing anyone in your way. Aiding you in this is that you have been given a new, literally golden eye that grants you unique powers that consume energy, which recharges over time. For this level, you have the power to see through walls and cover, called MRI Vision, as long as they aren’t too thick- this means you can see where enemies are waiting to ambush you, and prepare accordingly. And, when used in conjunction with the Mag-Rail weapon, which shoots through such walls… well, you can take out foes before they ever see you, from behind cover. 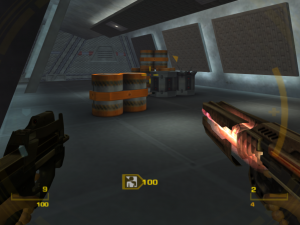 As you progress, you start unlocking more abilities, getting more and more powerful. The next is the EM Hack, which lets you hack devices remotely- this can be used to activate traps from further way, as well as hack into enemy weapons so they cannot fire. However, note that this ability works differently from the last- MRI Vision constantly drains energy as you use it, while the EM Hack uses up 45 of your 100 energy, so you can only use it twice at most at any time.

Later on you get the Polarity Shield, which drains constantly when in use and deflects bullets and the like, and even more impressively, will kill any foe that tries to punch you- or you can get the same effect by punching them yourself. However, either case drains the shield even faster, and it will not last long under sustained fire. It is useful, however, against what I suppose I could call mini-bosses; powerful thugs with shields of their own and names. These shields work like yours, except they do not run out on their own, and need to removed forcefully. You can just shoot them til it falls, but if you punch them while your own shield is up, both will be canceled out. 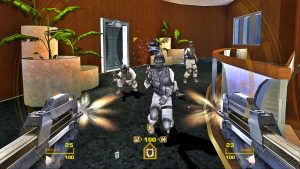 Your last and more impressive upgrade is the Magnetic Induction Field, which basically fires out a blast of invisible energy to send a foe flying, killing them instantly. This is obviously incredibly useful, especially if someone is after you while you are reloading or are otherwise vulnerable. You can also alter the direction they are flung in via what direction you are moving in- if you move left as you use it, they are flung left. This means you can bowl over enemies with their allies, stopping them from attacking and leaving them vulnerable.

The only problem with this power is that it uses up 75 energy- you won’t be using it again for quite a bit, and it severely limits your use of other abilities too. Your guns are also limited by what you can pick up from enemies and hold onto- though fairly often they will be holding what would be useful in the given situation. The game is hard, but fair in these regards.

In fact, my only real complaint about the game is how utterly long the levels get. The first one is fairly short and explains the controls, but the second is much longer, so long it has at least two checkpoints that prompt you to save so you can come back to them later. The game does not have many levels, but it divides them up into pieces, functionally making them levels of their own. This means trying to get through some of these left me rather tired, and certainly not wanting to keep playing for the rest of the day. Of course, this is entirely self-inflicted.

I did and still do want to beat the game, so it hardly put me off from the game entirely. Aside from the sheer length of the full levels, the game is very good in my eyes, and well worth looking into if you like first-person shooters.