First impressions are very powerful things. When I first played Digimon Rumble Arena 2, I felt as though it wasn’t a true sequel to the first one, a Digimon game in name only. Of course, I think I was sick at the time and it was a few years ago, so recently I decided to give it another chance. And I was pleasantly surprised to find it not only was fun to play once I relearned the controls, but an actual improvement over its predecessor in several ways.

Firstly of course there are the graphics- not usually the first thing I comment on, but the jump from Playstation to Gamecube in this case really does make the Digimon stand out a bit more. It looks nice, but I was perfectly fine with what we had before, so I won’t say that’s too much of a point in its favor. It looks nice. The transformations, or Digivolutions, also look nicer- no bits of the larger forms poking out of their cocoons as they change, and the actual transformation doesn’t look quite as jarring and out of place- probably helped by the fact that the game doesn’t pause to let the transformation take place, it just happens and the game goes on.

Speaking of that, one of the fundamental gameplay changes is that now there can be three or four people playing at once, not just two- which is why that sort of freeze can’t happen, or the game would basically pause every few seconds. Every Digimon that can digivolve now has two transformations, not just one, and rather than having rounds, the matches run on lives- every life lost knocks you back to the previous form as well. 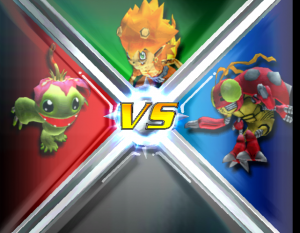 Your character can reach their next form via gathering orbs that appear after hitting your foes, or getting hit yourself, raising your gauge. You do not lose your gauge when hit, it just makes new orbs. Once you transform, the gauge empties- which can make getting the transformations back if you die difficult, though you do get a small bit of the gauge filled when you do die. If you are at your third form and fill up the gauge again, it instead lets you use it up to perform an ultra attack- this also applies to the bosses, since they cannot transform at all.

And yes, I did say bosses, plural- unlike the first Rumble Arena, which had only Reapermon, Rumble Arena 2 has several bosses of varying difficulty. Single player mode, rather than facing you off with random characters in one on one fights until you run into Reapermon, always starts with a one on one fight, after which you can choose what fight to go to next, with varying situations. These move you up and down the chart, with higher battles being more difficult, and lower ones being easier, ending in you facing whatever two bosses are closest to the match you just finished.

All of these boss battles take place on the Chaos Battlefield stage, which unlike the others, has no life or vibrancy to it- it is a simple set of platforms hovering in a void, with a ruined landscape, possibly caused by your enemy, sitting in the background. It is beautiful in its simplicity in a way- much like the first game’s final stage, which had no obstacles or traps, no power ups, just a simple fight between you and the boss. However, there are some things to look out for- once the battle goes on long enough, these platforms will start moving up and down, and occasionally some will spew out fire, call down lightning, or become slick with ice. They do this much more often in normal battles, from what I can tell, though that also seems dependent on which boss you are fighting. For instance, against Dioboromon, the platforms only shot fire, nothing else. 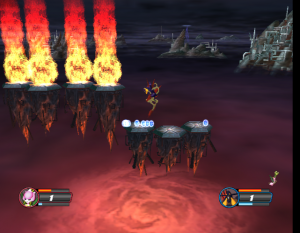 Another important point is simply that these platforms have no walls, meaning it is perfectly possible for you to simply be thrown off them or knocked off, and for you to do the same. In fact, this is the cause of most of my deaths in my playthrough, and part of the reason that my boss battle with Dioboromon took a full hour. Of course, that could be my inexperience showing.

That did not help my first impression years ago, however, as you might imagine, and I was a bit distracted by a few differences between the two. Namely, there is what could be called a difference in atmosphere, or as I said then, it seemed like the game had ‘no soul’ compared to the first. The first game was lively and upbeat, with a cute Calumon acting has your narrator, the characters having their own victory quotes, and their human partners from the anime, if applicable, cheering the Digimon on when picked and encouraging them when digivolving.

None of this is present in the second game, Calumon replaced by a generic and invisible narrator, and there is no sign of human presence at all. It could be the same Agumon and the like, or it could be a completely different one for all I know. The music also seemed more serious. Looking back I suppose one could say the first game comes off as more for the younger kids watching Digimon at the time, while the second is for the older fans that would still go for its sequel. But I basically expected a straight improvement of the original.

Another thing that jarred me was that none of the characters have unique victory or defeat quotes, simply saying “I won!” or “I lost!” which along with the lack of humans and the cute narrator from before… lead me to assume the game had no personality whatsoever. No soul, simply the appearance of the series and mindless fighting.

However, on playing it again, I am forced to reconsider this. It does make sense they would have no victory quotes- after all, that would mean adding quotes for not just the 19 characters you can select, but, since I believe 12 of these are non-bosses, they can transform twice, meaning you would need quotes for all three forms- functionally this adds up to a total of 53 victory quotes needed- and that’s just one for each. So I can see why this would not be too viable, and the game makes up for this in an unusual way to me. 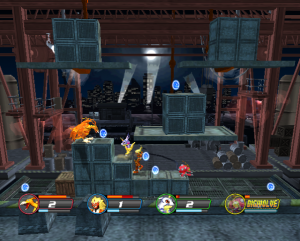 The stages of the first game, while being interesting and stand out, are a bit bland in theme- they have no names, and are basically a forest stage, volcano or fire stage, an ice stage, and so on. Only Reapermon’s own stage seems to actually connect to anything, typing Reapermon to the villain Dioboromon from the Digimon movie… but it does not do so in any overt way, and it could be argued it is just a place Reapermon happened to be in. It looks cool, but that’s all at the end of the day.

Rumble Arena 2, on the other hand, does have named stages, and this gives them a sense that these are actual places in the Digital World, and helps them stand out- especially compared to the first game. For instance, the forest stage in the first game seems to be an odd spot in the middle of a forest with a cave in the background, where rocks occasionally roll out of.

In contrast, we have the Jungle Ruins of the second game, which has no hazards, but a destroyable bridge and trees, and basically serves the role of a starting area or training stage- and indeed, the first single player fight will always be there. There is also Rubber Tree Falls, a possibly connected stage where you are fighting on a rock attached to a jungle’s waterfall. There are massive tree leaves covering most of the stage’s floor, which as the name implies are rubber, and will bounce you high into the air. This makes it easy to get over your opponents and drop down on them to stun them- a stomping move any character can do. 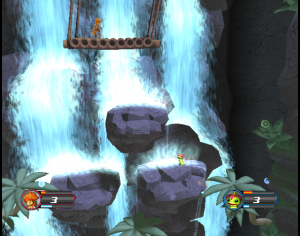 So we go from a generic unnamed forest stage to both a training level and one based on vertical and jumping combat, both with names. The characters themselves are improved and given an additional transformation, and there are many more bosses to aspire to defeat and unlock. Gameplay wise, it is a great improvement over the first game, and while many of the more cute or anime related bits of the first game are removed, they aren’t needed to make the game good in of themselves, and there is still more nods to the anime in the form of the stages and characters themselves.

A long story short, despite my first impression, on seeing the game again, it truly is fun to play, and even undeniably better than its predecessor.