The Atelier franchise is completely labyrinthine. A quick trip to Wikipedia (I know it’s not the most reliable source, but it’ll do for our purposes) tells us that there have been an incredible 21 games in the franchise, all of which are subdivided into seven different meta-series. Salburg, Gramnad, Iris…if you’re not familiar with these names, then the Atelier franchise probably looks as daunting and off-putting to you as it has done to me in the past.

What we need is an entry point, somewhere that non-fans can step onto the series and start playing. Luckily, we now have Atelier Ryza: Ever Darkness and the Secret Hideout. Don’t let the slightly unwieldy title fool you; this is an excellent jumping-off point for the series and somewhere I’d recommend anybody to start if they were looking for a place to get into Atelier. On the strength of Ryza, getting into Atelier is something you absolutely want to do sooner rather than later.

Here’s the rather lovely setup. Reisalin Stout (Ryza, see what they did there?) lives on a rural farming island and is going nuts because there’s nothing to do. One day, she steals a boat with her two best friends and rows to the mainland. She comes across Empel and Lila, wandering alchemists who spark some interest in the young Ryza regarding alchemy. Ryza determines she’ll learn everything she can about this art and the world around her as she goes.

It’s a wonderful setup that feels adventurous and playful, shorn of the usual JRPG hand-wringing melodrama. Needless to say that does rear its head throughout the course of the story, but if you’re looking for a more light-hearted way to enjoy the delights of JRPGs, then Atelier Ryza is exactly where you should apply. The storytelling is gentle, pointing up conflicts between urban and rural ways of life without ever feeling didactic or heavy-handed.

Atelier Ryza’s endearing and loveable cast of characters really helps to keep the plot whizzing along. They may all feel a little like archetypes – Ryza herself is the wandering ingénue, Empel the wise teacher – but the way the game handles their interactions, as well as the core party’s interactions with the NPCs and the world around them, makes Ryza’s many dialogue exchanges feel like a joy. This being a JRPG, there’s plenty of writing to wrap your head around, but it doesn’t feel like a chore reading the delightful dialogue.

There’s also some truly sumptuous eye candy to feast on here. Atelier Ryza has pulled out all the stops when it comes to graphics and the results show. The PS4 version crackles and shimmers, with sunlight playing off surfaces and textures brimming with detail and life. The game has gone for a fairly standard anime-style aesthetic, but the excellent graphics help bring its world to life in an unprecedented way. Ryza is a game for those who love to simply stop and stare as well as those who love to play. 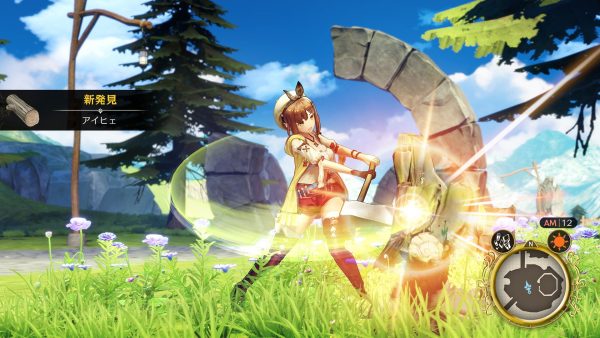 Of course, even JRPGs must eventually wash their faces in the gameplay department, so it’s a joy to report that Atelier Ryza: Ever Darkness and the Secret Hideout manages this not-insignificant feat with aplomb. As with every Atelier game, Ryza’s journey is focused around the three-headed hydra of alchemy, exploration, and combat. Each discipline here feeds into the others in a satisfying way; where in previous Atelier games the systems have been a little disjointed, here they come together.

The alchemy system in Ryza cements its place as the perfect beginning spot for JRPG aficionados wanting to get into the series. If you want to, you can simply throw some stuff into your alchemy pot and you’ll get items. This approach worked perfectly well for me throughout the game, and I never felt like I was falling foul of a refusal to get to grips with some of the more intricate and tricky systems. If you don’t like tinkering, Ryza is still great fun.

That’s not to say there’s no depth. If you want to, you can get lost in Atelier Ryza’s dizzying world of recipes, combinations, and modifiers. Optimising your party to make sure every single combat encounter goes exactly the way you want is definitely an option here, and it’ll extend the gameplay length by multiple tens of hours, so that alone gives the alchemy system my stamp of approval. When I replay Ryza (when, not if), I’ll be paying a lot more attention to picking the correct items for each node. 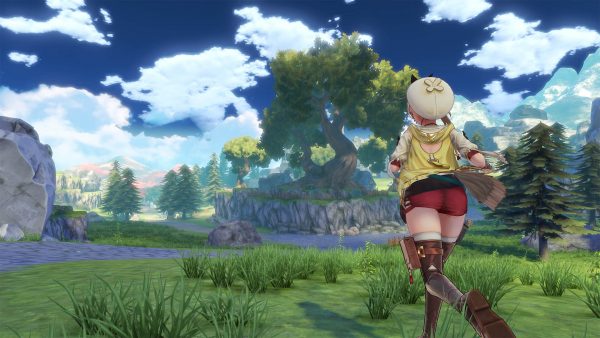 Exploration is reasonably standard in Atelier Ryza. As with most other JRPGs, you’ll explore the world around you, chatting to NPCs while in towns and solving rudimentary puzzles in dungeons. Combat helps to break up the exploration a little; it’s probably the only area in which Atelier Ryza stumbles somewhat. That’s not to say this aspect drags down the overall experience, but with such great combat and alchemy systems, the rote exploration is a bit of a shame.

The combat is perhaps the biggest area where Atelier Ryza differs from its franchise stablemates. Unlike previous instalments, Ryza boasts Ni No Kuni-style active combat rather than a turn-based system. While there are certainly systems to get your head around – AP, Core Charges, and Tactics Levels – you don’t need to pay any attention to them if you don’t want to. The systems in Ryza’s combat augment the overall experience but they don’t threaten to take it over.

All in all, Atelier Ryza: Ever Darkness and the Secret Hideout is a game perfectly pitched for new players. If you’ve never experienced this series before, this is the ideal place to start. With more fast-paced and involving combat, better dialogue and characters, and the best alchemy system the series has ever seen, Ryza presents an excellent case for its franchise being better-known in the West than it currently is. Pick this one up and you won’t regret it.