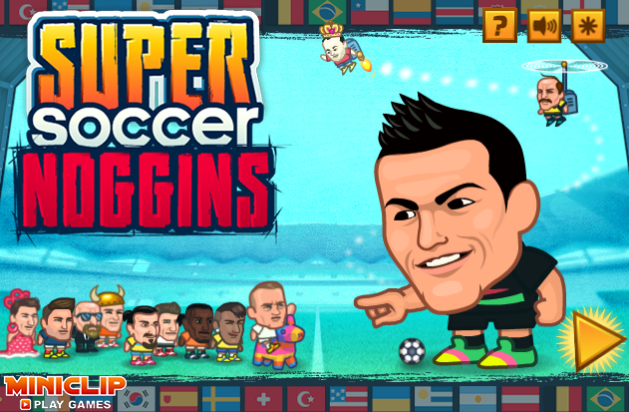 Right from the title screen, it’s clear that Super Soccer Noggins is different. A towering, big-headed player (who looks quite like Lionel Messi) is pointing and laughing at tiny athletes. Some of the little players are wearing silly costumes, and all of them look familiar. The club selection screen is filled with real countries, and there is one star athlete on each squad. Instead of using real names, it looks like each character is a hilarious caricature of a real athlete.

The humor continues with the names of each tournament. Super Soccer Noggins features Le Croissant Cup, the Piñata Trophy, and Hei Tiki Taka Cup, among others. Tournament-style gameplay is the only way to compete. This might be a drawback for those who want to play a quick single match with two specific teams. But, gamers are allowed to choose their own squad before entering Le Croissant Cup.

The athletes in Super Soccer Noggins look different, but they all play the same way. Regardless of which team is chosen, each athlete’s Rush, Backtrack, Jump, and Kick attributes begin at the same mediocre level. The only way to improve is by spending cash on stat upgrades. Cash rewards are given to the victor of each match. There are also larger prizes for specific achievements (e.g. “Goal Killer: Score 4 goals in one match”). Without upgrading an athlete’s stats, it becomes nearly impossible to win tournaments. 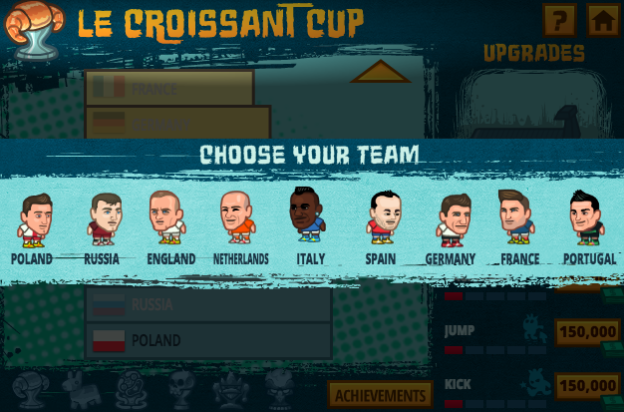 The one-on-one gameplay in Super Soccer Noggins is fast and funny. A flying referee will drop the ball from the sky, as he hangs from a jetpack helicopter. During each 60-second match, power-ups will randomly appear on the field. These modifiers affect the gameplay in many surprising ways, from shrinking one team’s goal to awarding a magical Viking helmet. The power-ups, which vary during each game, keep the action fresh. In addition to the helpful (and equally detrimental) modifiers, not all soccer fields are the same. Certain stadiums feature extremely hilly grounds, or pieces of land that rise and drop. There are also bumpers that may appear in the sky, causing the ball to bounce violently towards the net.

Super Soccer Noggins is not a realistic soccer game. But, it gives players an impressively entertaining arcade sports experience. Despite the lack of additional game modes (Quick Match, Practice, etc.), the default Tournament gameplay is rewarding and fun. Leveling up an athlete’s stats is an addictive process that only comes from winning matches. There are enough tournaments, achievements, and secrets to satisfy sports fans and casual enthusiasts alike. There are millions of virtual dollars waiting to be won in the Golden Skull Cup!