I’ll have to admit that when I first saw screenshots of Stardew Valley last year and heard tales of how it’s a game all about farming, I had a few questions. They were; how the heck is that fun? What’s the appeal? How did this get so popular?

So it was with some trepidation that I got my hands on the PS4 version of the game and set about trying to make the most of my time in the Valley. The game opens with you creating a character and witnessing your grandfather pass away. Cut to you in a dead-end job, wishing for an escape, you decide to open the letter your grandfather gave to you as part of his will. What do you know, the letter contains a message essentially saying ‘quit your job’ and also in the envelope is the deed to the farm dear ol’ grandpappy used to run. 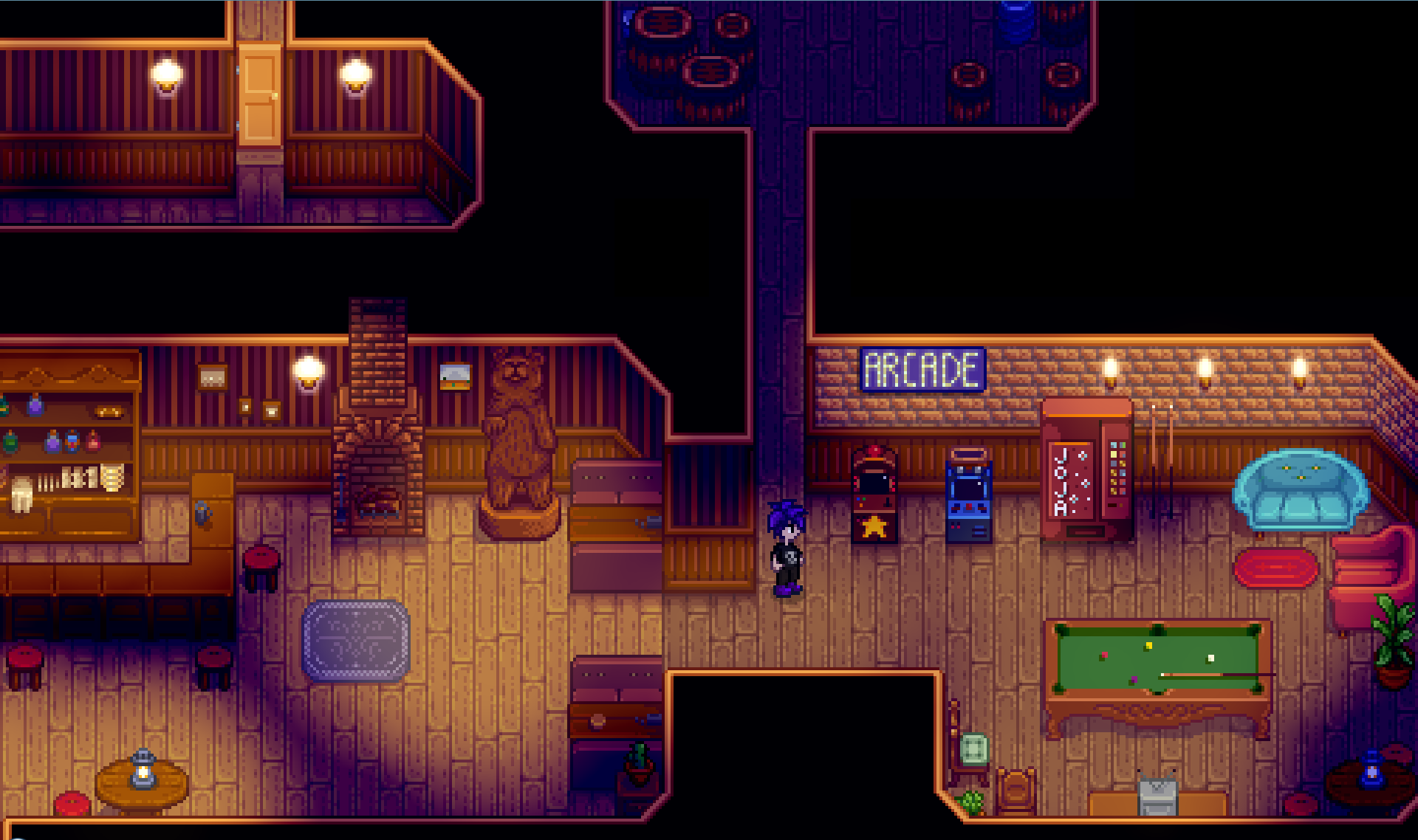 So it begins. Whilst you’ve been away, stuck in a cubicle, drinking vending machine coffee and inputting data into spreadsheets, your grandfather’s farm has fallen into disarray. There are weeds everywhere, no crops and no livestock. It’s in a sorry state. On top of this, the local town, Pelican Town, is under threat from a new supermarket that’s just moved in. A giant conglomerate called Joja Corporation is slowly stealing the customers of the local businesses and threatening the future of the town itself. Say it ain’t so!

On top of this basic setup there’s also a ton of other quests, side-stories and missions to discover. For a start, there’s a community center that can be rebuilt by appeasing strange fairy-esque creatures that want you to meet certain criteria, often asking you to bring different types of crops to them. There’s also a dungeon crawling section to the game, with an adventure guild that wants you to explore the depths of the mines. There’s an awful lot that you can do in Stardew Valley and it would be really boring for me to write (and for your to read) about every single thing you can unlock and achieve. Instead, let me talk to you about an average day in the life of your Stardew Valley character.

You wake up nice and early. 6AM to be precise. From your bed you rise and you check the TV. You see what the weather’s going to be like tomorrow and you see it’s going to rain tomorrow. That’s good, because when it rains that means you don’t need to water the crops. Result. 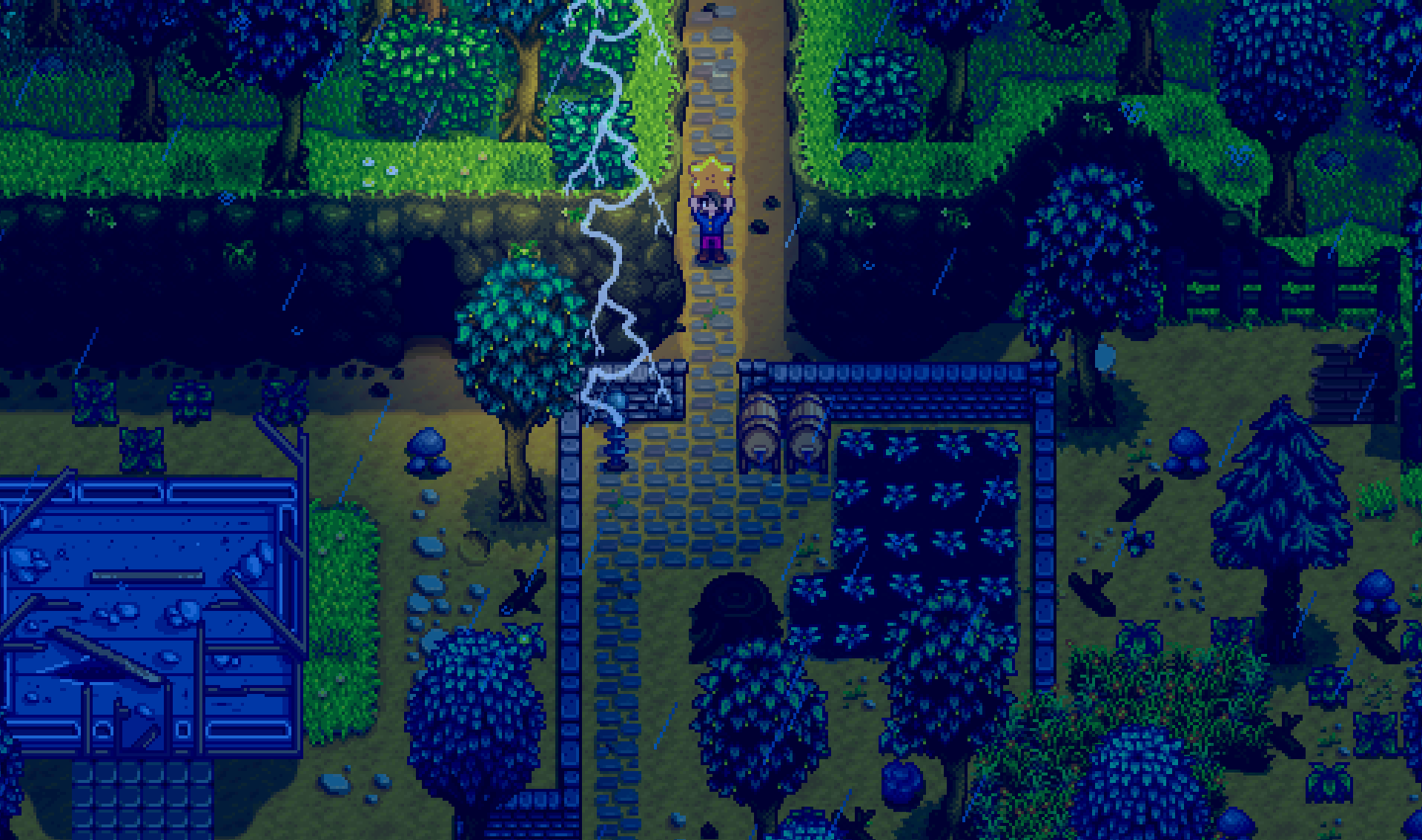 However, as you leave the house you see it’s a bright, sunny summer’s day. First thing’s first – you better water the crops. As you water the crops you notice that some of the melons are ready to harvest. As you place the melons into your delivery crate (which is how you sell your goods) you realise you’ve got a spare iron bar and a copper bar so you can now craft a sprinkler, which will save you having to water some of your crops tomorrow. Whilst your in the craft menu, you make yourself an energy bar, as all this work has depleted your stamina and you’re going to need it for where you’re going next.

Today’s the day you’re going into the dungeon. You want to take out some more slime monsters, as the Adventure Guild will reward you once you’ve slain 100 of the gelatinous creeps, also, while you’re down there, you figure you can get hold of some more iron ore which you’ll need for future crafting.

As you’re heading to the dungeon you cross paths with… let’s say Penny. Penny is your ‘friend’ who you’re looking to impress and would like to be more ‘friendly’ with. You chat to her and hand over a gift which you think she’ll like. Turns out that she’s not too keen on apples, so you’ll have to make it up to her some other time. Luckily there’s a flower festival happening Saturday, you’ll make sure to have something better to give her then.

Anyway, into the dungeon you go, slaying monsters and using your pickaxe on rocks. You’re picking up all sorts of great materials, some of which you don’t know how you’ll use just yet but you’re sure a new recipe will let you cook or craft with what you’ve just acquired.

It gets late. It’s 11PM and your stamina is low again. Back to bed with you. You think about what you’ll do tomorrow and you remember that you’ve got some crab pots that need checking on, down by the beach. You’ll be sure to check on those in the morning and whilst you’re there, do a spot of fishing. You must also be sure to check on how your hops are doing. They’ve been brewing long enough that tomorrow you should have a good haul of beer to sell. Though be sure to save one for yourself. You’ve earned it. 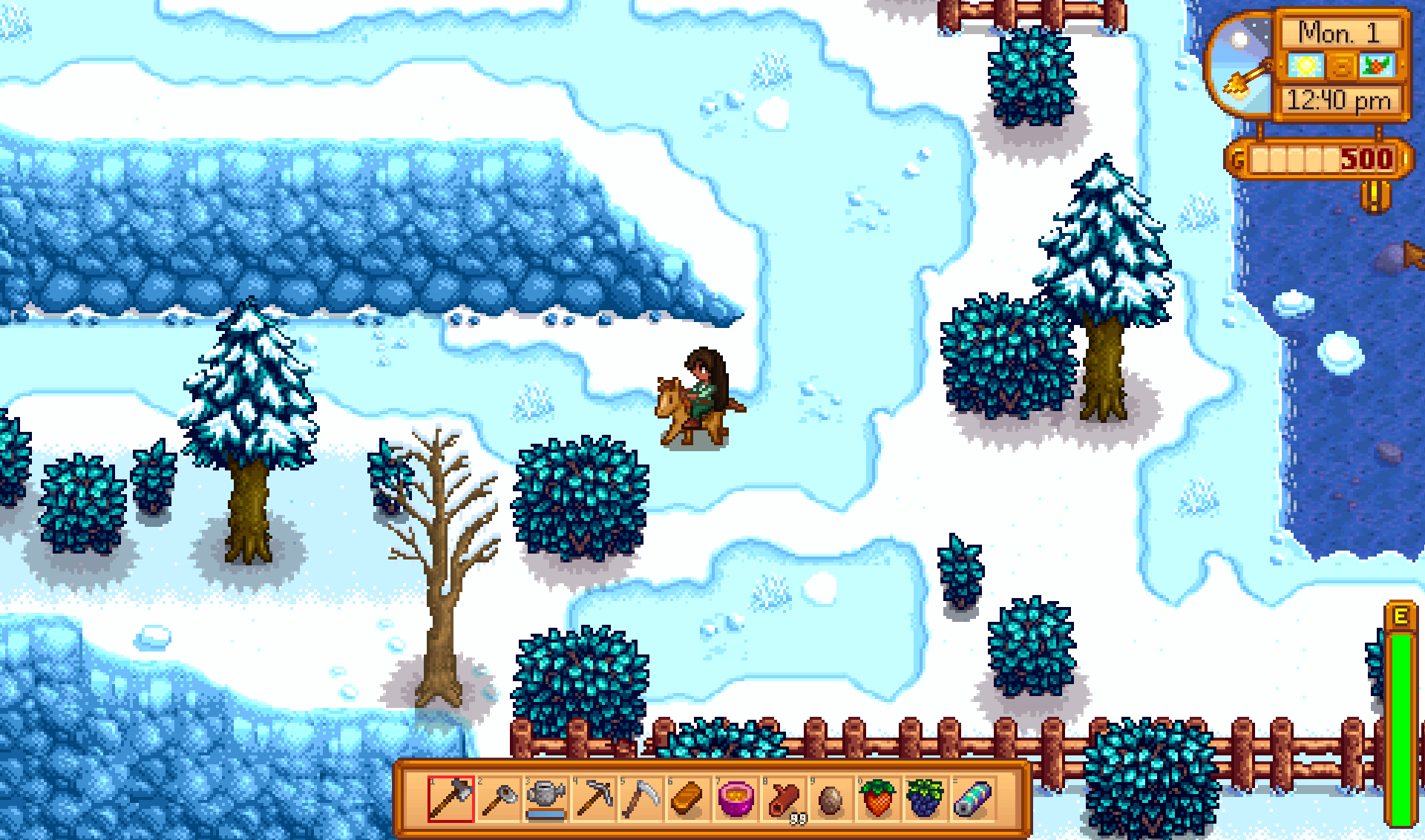 That should go some way to explaining the appeal of Stardew Valley. It’s a game that is so full of possibility, with each day starting off with so much potential that it can be overwhelming. There’s so much to do and so many things pulling you in different directions that for some people this will be a turn off. If, however, you simply pick a task and set yourself a goal you’ll find that you’re constantly making some form of progress.

This lack of direction is aided by a journal that will hint you towards key quests that you really should complete. Building a coop for your chickens and then buying some chickens was lodged in my to-do list for weeks before I gave in and did as the game told me. I was too busy doing other ‘things’ and getting on with other ‘bits’ of the game.

This structure may turn off some people. The game is made up of lots of little quests and things to do, whilst there’s not really a ‘main’ story to complete (as such). Stardew Valley is all about getting a farm up and running and integrating into a new community.

Another factor that may turn people off is the fact that this is a PC port and the controls suffer as a result. It’s not that the controls are bad, as I got used to them quite quickly, but it is jarring to see an onscreen cursor appear whenever you’re trying to navigate a menu, of which there are a lot. If you expect your menus to look and operate as slickly as Destiny’s, then Stardew Valley’s slow and clunky PC focused UI will be a bit of shock. 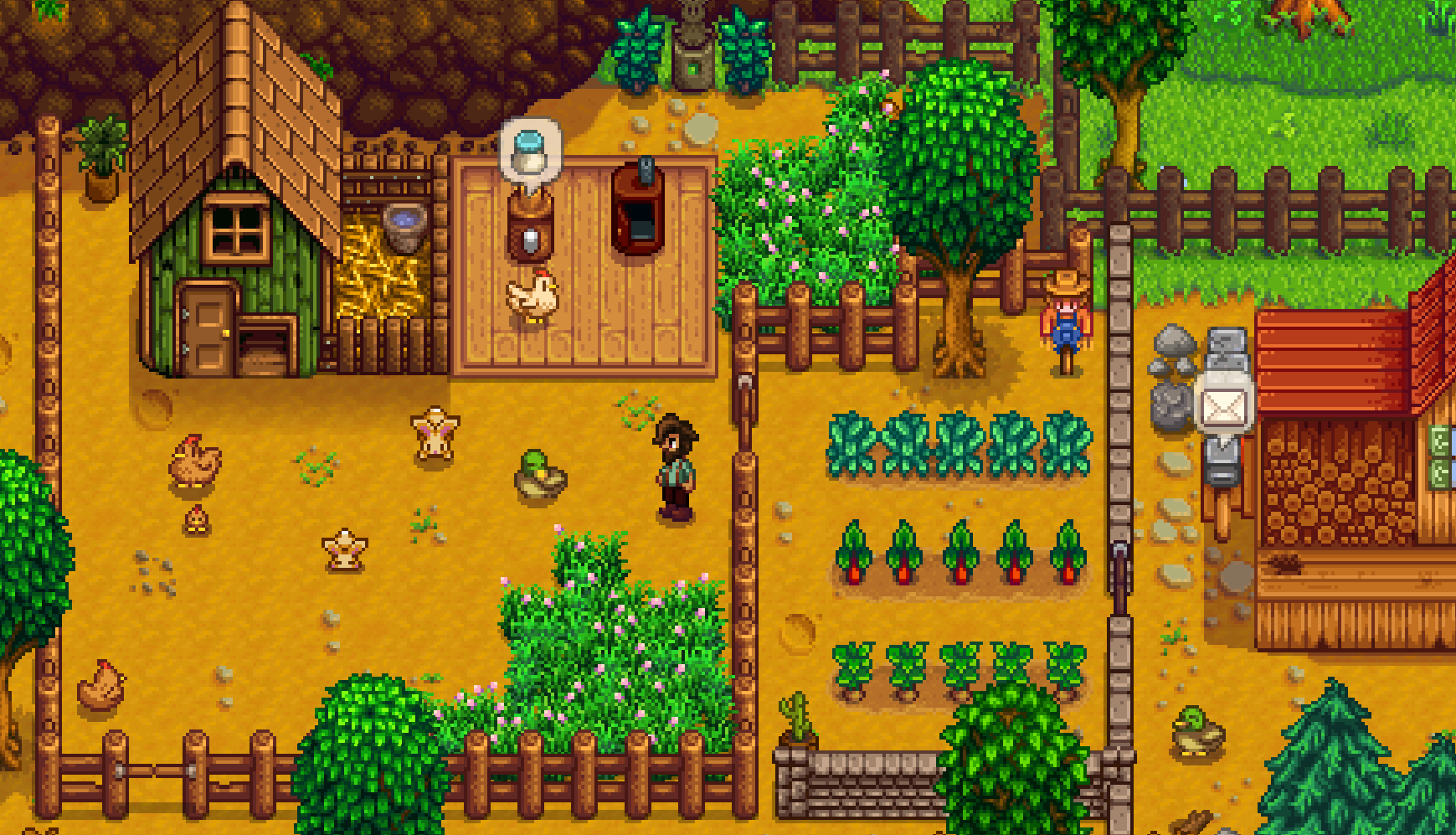 And that’s about the only negatives I have to say about Stardew Valley. The sprite work is extremely solid, with tons of variety to the colour scheme as the seasons change. The music is also toe-tappingly good and similarly alters as the seasons pass. Upbeat summer tunes are replaced with more sombre winter melodies and this level of detail and care is applied to everything Stardew Valley does.

To think that this game was made by a single developer is astonishing. There’s so much content, character and cheer in Stardew Valley that I just can’t recommend it enough. The lack of direction and somewhat clunky menu controls may put off some people, but for everyone else this is a perfect escape from those cubicle blues.

Lost Ark is an impossibly massive game full of content. With 7 continents separated by vast seas, each one containing a bounty of NPCs...
Read more
Editorials

Twitch has become one of the most popular streaming sites for amateur and professional streamers, particularly gamers who continuously broadcast while playing games such...
Read more
Accessories

There are so many options on the market when it comes to gaming headsets that it can be hard to know how you’re supposed...
Read more