There are countless video game titles that try to emulate the utter chaos of a war-zone; the combat, the fire-power, the explosions, the hum of helicopters overhead. Franchises such as Call of Duty and Battlefield do a decent job of capturing some of that atmosphere while providing a solid first-person shooter. But for true life or death realism, Rising Storm 2: Vietnam has got you covered.

First things first, Rising Storm 2: Vietnam is not a game for casuals or first-timers. It provides an intense, totally unforgiving gun-play experience for veterans of the genre. Rising Storm will do very little to help you complete your objectives, something that really gives this game its edge and helps it hit the sweet spot between first-person shooter fun and realistic war-zone thrill. Don’t expect any visual aids such as glowing outlines on your opponents or enemy name tags. If your enemies are hiding, it won’t be easy to find them. 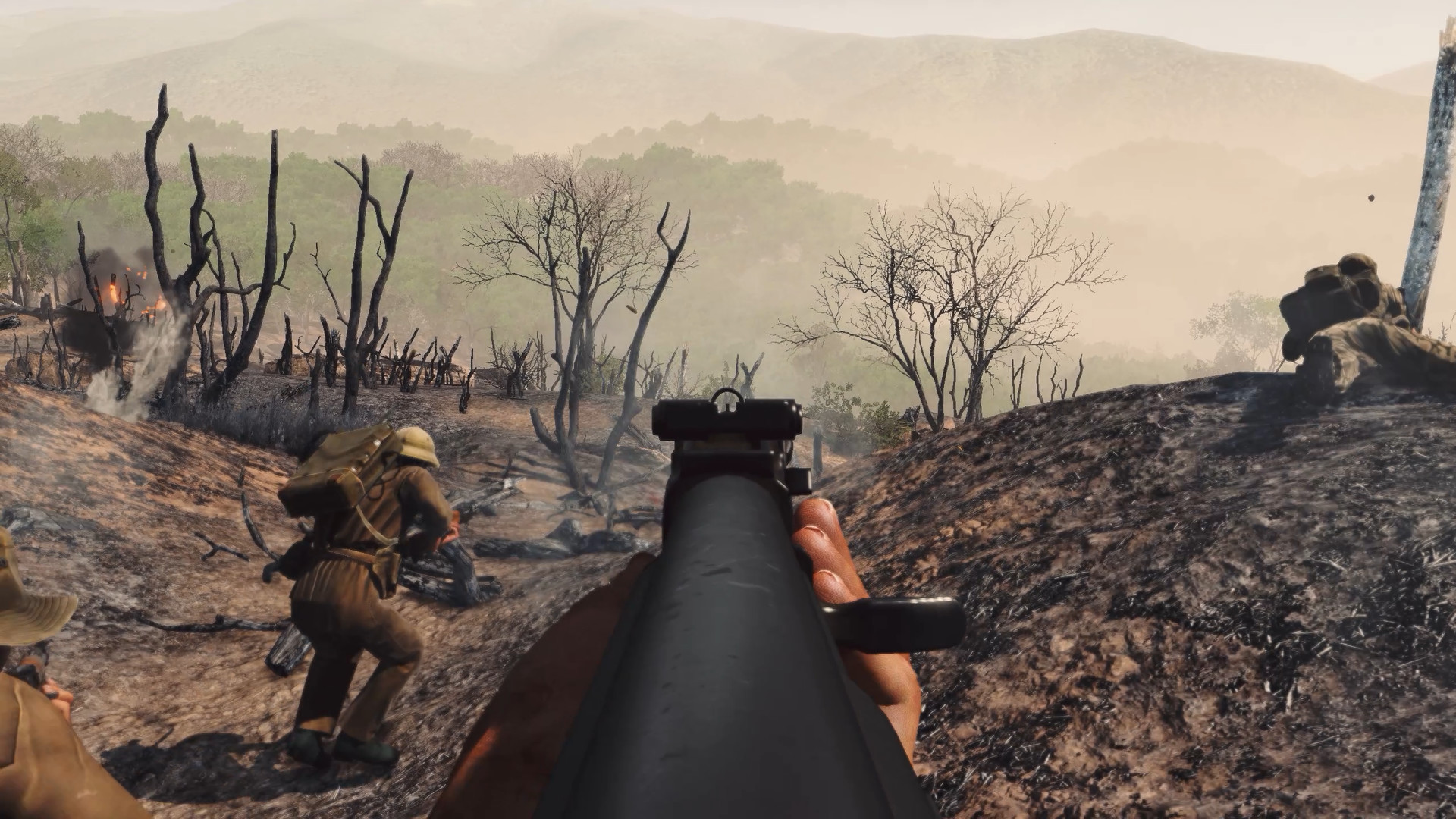 On the plus side, you can execute a slick ambush from your own hiding spot. Playing the stealthy waiting game will actually help you a lot in Rising Storm 2: Vietnam. If you aren’t taking cover, you’re getting shot. In fact, you will probably die a lot in this game if you’re not really tuned into your surroundings.

Speaking of surroundings, the game looks fairly impressive. We would’ve expected the use of Unreal Engine 3 to be much more of a graphical hindrance, but the shading, dynamic shadows and detail are actually quite crisp. Granted, details such as particle effects aren’t going to blow your mind, but the immersion isn’t interrupted. Water-logged rice fields, tall grasses and palms swaying gently in the breeze provide that quintessential, juxtapositional Vietnam atmosphere of chaos in paradise. Just don’t get too distracted by the scenery.

Rising Storm 2: Vietnam manages to rival Battlefield 4’s 64-player matches, which immediately certifies a nice level of team death-match mayhem, while also offering 16-player skirmishes. Among the 64-player modes is the classic ‘Territories’ mode wherein an attacking team aims to capture all of the objectives on the map before time runs out and the round ends. The defending team wins if they hold the objectives for enough time to break the assault and enter lockdown. There’s also ‘Supremacy’ mode in which teams capture objectives across the map, earning points for the number of objectives they control, ending in sudden death if scores are tied. As for the 8 on 8 skirmish mode, it’s similar to supremacy mode, featuring smaller maps. Players must capture objectives while depleting enemy spawn tickets before time runs out.

There’s a fairly extensive list of roles and load-outs including classes such as the basic Grunt (equipped with rifles and hand grenades) and Marksman (Semi-automatic and bolt action sniper rifles), more specialist roles such as Grenadier and Sapper, and advanced roles like Radioman and Commander. There’s also piloting roles for helicopters, which are surprisingly satisfying to pilot with solid flight controls.

The gun-play in RS2: Vietnam is excellent and the sound design ticks a lot of boxes too with distinctive sound effects for each weapon type, allowing the player to tell what’s heading their way so at least you’ll have some idea of what’s going to kill you next. You’ll also find that there’s an automatic weapon resting system in place whenever you approach a wall or ledge of some sort, which is a nice extra boost for accuracy and weapon stability.

In short, Rising Storm 2: Vietnam is a brutal first-person shooter in which you will die a lot. That might sound off-putting, but its gritty realism is what makes it so rewarding to play. If you’re looking for a truly savage war-zone experience with great tactical gun-play, immersive sound and graphics then Rising Storm 2: Vietnam is the title for you. Just remember to keep your head down.