It’s been a few months now since the release of Metal Gear Solid V: The Phantom Pain, Hideo Kojima’s final game in Konami’s long-running series, and after finally completing the game myself, I decided to go back to the beginning of the saga and play 1987’s Metal Gear for the first time. (And let’s face it, given Konami’s recent behaviour and business decisions, the series’ past is likely brighter than its future at this point). 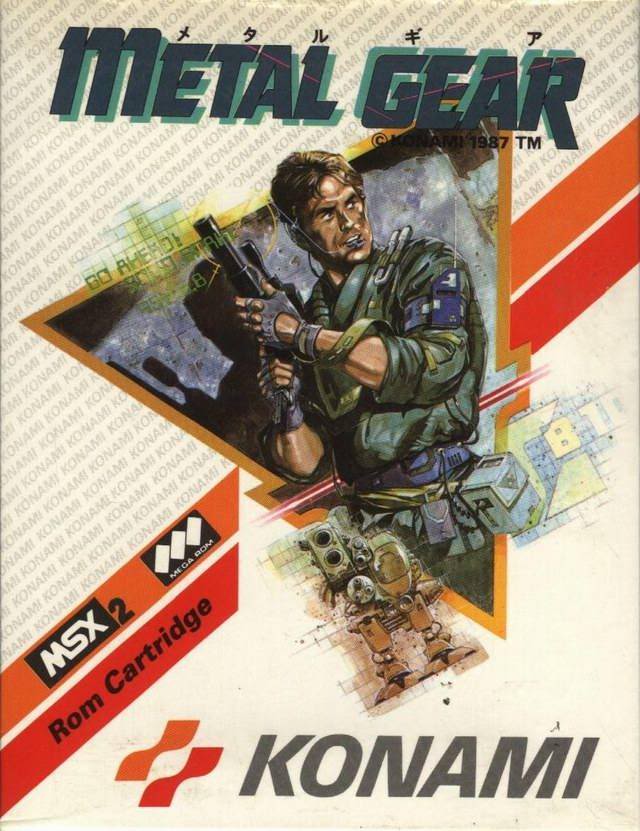 Released on the MSX2 computer in Japan and parts of Europe (with a bastardised port appearing on the Nintendo Famicom / NES), Metal Gear is the first videogame designed by Hideo Kojima and marks the beginning of a series which he would oversee for nearly three decades. An early stealth-focused videogame (and one whose cover shamelessly rips off a publicity still of Michael Biehn in The Terminator), Metal Gear casts the player as Solid Snake, a rookie member of special forces group FOXHOUND who is tasked with infiltrating the fortified state named Outer Heaven and destroying Metal Gear, a bipedal tank equipped with nuclear weapons.

Metal Gear’s focus on stealth over action is made immediately apparent when you begin the game, as Snake is unarmed and must procure weapons and equipment during the mission. He isn’t totally alone, however, as he remains in radio communication with FOXHOUND commanding officer Big Boss as well as members of a resistance movement within Outer Heaven. These supporting characters can offer advice, with each character focusing on a different subject, from locations of items to boss-battle tactics.

Outer Heaven consists of both outdoor and indoor areas, the majority of which are patrolled by armed guards. Should you be spotted by an enemy or a device such as a camera or infrared sensor, the mission isn’t an immediate failure – rather, the game enters “Alert Mode”, requiring you to escape or eliminate your pursuers before regular infiltration can resume. Also, there are actually two stages of Alert Mode, with one being more difficult than the other. 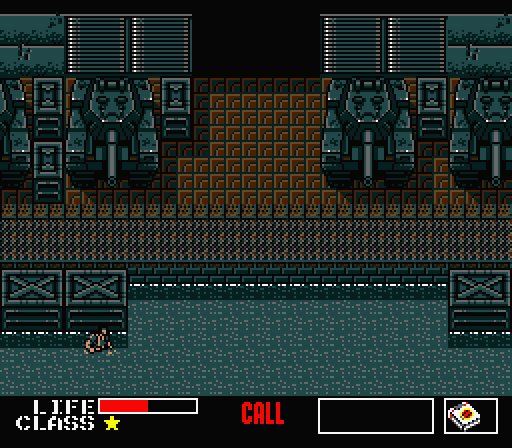 If your aptitude for stealth matches that of a drunk, clog-wearing bear then don’t worry as you’re not defenceless – not only can you defeat standard enemies with a few punches but there are also weapons such as a pistol, explosive grenades, landmines, and a remote-controlled rocket launcher. Some of these weapons have uses besides straightforward combat, such as using explosives to blow a hole in a wall in order to access a hidden room beyond, or using a remote-controlled missile to destroy a power box at the far end of an electrified floor.

Weapons also come to the fore during boss encounters, which include battles against vehicles such as a helicopter and a tank, as well as a range of dangerous mercenaries such as Machinegun Kid, who wields a sharpened spatula (just kidding, it’s a machine gun); Fire Trooper, who is armed with a flamethrower; and Dirty Duck, who has apparently decided that boomerangs are much more practical and lethal than guns, flamethrowers, explosives or anything else. These boss battles are pretty straightforward, not really being indicative of the imagination present in many of the boss battles in future games in the series, although the fight against Dirty Duck is given an added dimension by him surrounding himself with hostages who you must avoid shooting.

Speaking of hostages, scattered throughout Outer Heaven are a number of hostages who you can rescue, some being easy to find while others are hidden away. Rescued hostages supply you with snippets of information, and the more you rescue, the further you can increase your maximum health and the number of items you can carry. On the flip side, killing hostages can remove upgrades you’ve earned. 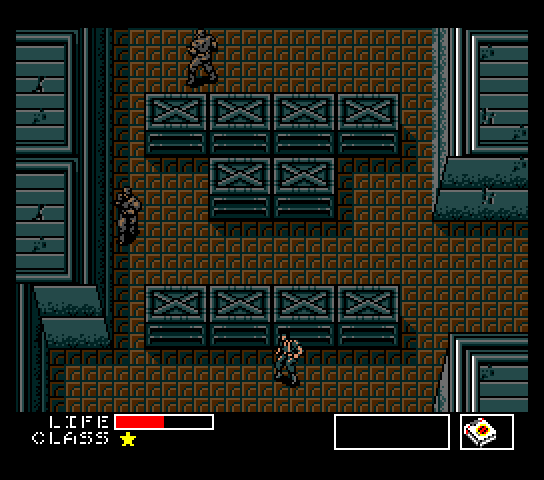 Other non-hostile characters you meet include captured FOXHOUND colleague Grey Fox, Metal Gear designer Dr. Madnar, and Madnar’s daughter, Ellen. While your interactions with these characters are quite limited, they still help to move the plot forward and add further depth to Snake’s mission.

Your progress through Outer Heaven often relies upon collecting a series of numbered key cards, with each key card unlocking a corresponding set of doors. You can only open a locked door with the relevant key card actually equipped, resulting in an annoying amount of time spent going into and out of the inventory screen. At the same time, the key card system encourages exploration and rewards backtracking, as your initial pass through an area might reveal a door whose key card you don’t possess yet, but to which you can return later.

Outer Heaven is a large, sprawling location, and although it’s sometimes easy to become lost, the level of freedom offered by Metal Gear remains one of the game’s strengths, arguably making for a more interesting and believable setting than if the player was simply railroaded from one level to the next. 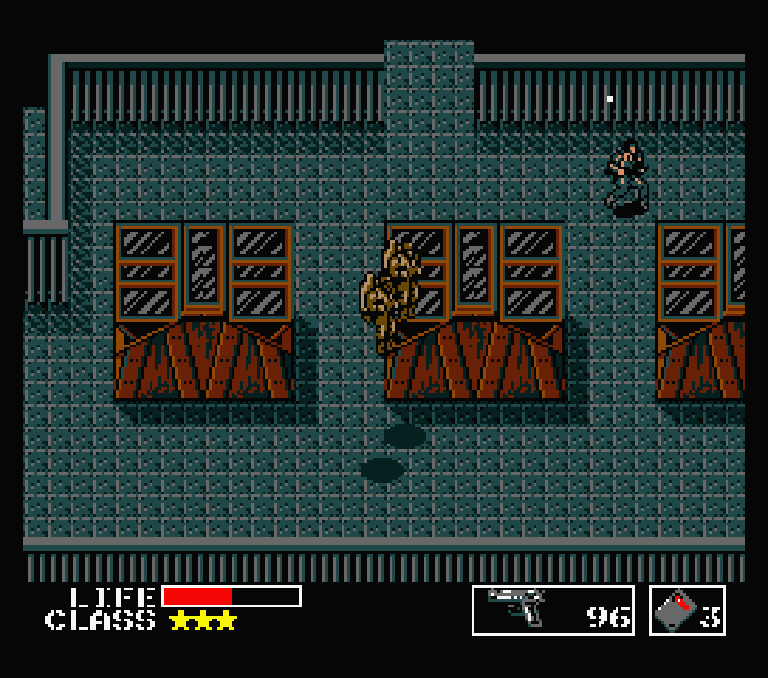 The visuals are decent, remaining clear and detailed enough to be enjoyed despite their obvious age, and the almost-top-down camera view is a practical and user-friendly choice, giving the player a good view of the action. As for the music, the number of tracks is fairly small, and while some of them are very atmospheric and fitting, you will be hearing a couple of them over and over, so repetition can set in.

Metal Gear builds to an exciting and satisfying conclusion, one featuring a twist which should be common knowledge to most people familiar with the series. Worthy of note is the build-up to this twist, which is done in a fairly subtle and interesting way, and even includes an instance of something which Kojima would go on to include in future games in the series: namely, breaking the fourth wall. As someone who’s been a fan of the series since first playing Metal Gear Solid on the original PlayStation, it’s interesting to see the first appearances of series staples such as the fourth-wall-breaking and the post-credits dialogue scene.

Also, Metal Gear’s conclusion – and to a lesser degree, the entirety of the game’s events – is even more interesting in hindsight given how Metal Gear Solid V: The Phantom Pain ties into the first game, Kojima bringing the series full-circle after so many years. 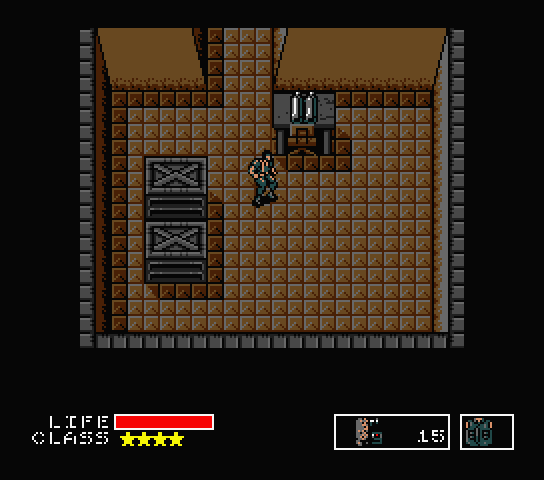 Metal Gear remains an enjoyable game and one definitely worth playing if you’re a fan of the series or stealth games in general. While it has of course aged in some regards and suffers slightly as a result, on the whole it has stood the test of time well. (A bit like the youthful-looking Kojima himself – as acclaimed as he is as a game designer, I’m surprised he’s not more acclaimed for apparently halting his aging process twenty years ago). In fact, one of the things that struck me personally while playing the game was how far ahead of its time it seems in comparison to so many other videogames of its era.

Not many videogame franchises have exhibited the longevity and critical and commercial success of the Metal Gear series, and while it’s reasonable to think that its future seems in doubt at the moment, its impact upon not just the stealth genre but the videogame medium as a whole will always remain, and playing Metal Gear now is a fascinating look back at where it all began.