Now this is a blast from the past. 2009 being a retro year is scary for those of us who remember being on the cusp of adulthood around that time, but there’s no mistaking it; Resident Evil 5 now feels like it belongs to a bygone era. Not that you’d know it from the amount Capcom re-releases the game for various different platforms, of course. That’s not a complaint; we love Resident Evil 5, so getting a chance to play it in a variety of ways comes as a pleasant surprise every time.

It was with a lighthearted skip in our step, then, that we approached the new Nintendo Switch port of Resident Evil 5. The followup to Resident Evil 4 was always going to be a difficult one; how, after all, do you make a sequel to one of the most influential and impressive video games ever made, one that defined the genre and made its third-person shooting mechanics de rigeur for an entire industry? Resi 4 was never going to be an easy act to follow.

Capcom’s strategy with Resident Evil 5 was to double down and produce a game very similar in gameplay to its predecessor, but to ratchet up the action aspect at the expense of survival horror. Resident Evil 5 does have its fair share of scary moments, but there’s nothing as tense as the village chase sequence or the first Regenerator encounter in Resident Evil 4. Think of Resi 5 as a popcorn action movie with horror elements rather than a straightforward horror game.

Here’s the setup. Chris Redfield is tasked with travelling to the fictional zone of Kijuju in Africa. He’s there to apprehend Ricardo Irving, who’s looking to sell a biological weapon on the black market. This being a Resident Evil game, it doesn’t take long for things to start going wrong, and before long Chris and his partner Sheva are battling parasitic horrors and desperately struggling to survive. It’s a classic Resident Evil setup, and it’s the perfect breeding ground for some buddy-cop action. 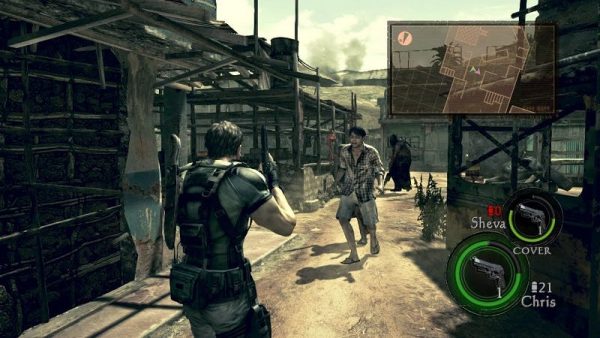 If you want to know exactly how the Switch version of the game holds up, it’s…well…fine. There’s nothing particularly remarkable about the Switch port; it’s Resident Evil 5 on a handheld. Of course, that in itself may be enough to persuade you to pick this version up. The way Capcom has managed to cram the entire Resident Evil 5 experience into a dinky handheld like the Switch is nothing short of amazing, and watching the action unfold on the Switch’s handheld screen is consistently jaw-dropping.

Unfortunately, that impressive technical feat does come at the expense of some pretty egregious framerate drops. If you’re hoping for a smooth experience playing Resident Evil 5, you’re probably better off opting for one of the other consoles or the PC release. When there are a few enemies on screen – as there frequently are in the later tribal village areas – the framerate dips and it’s hard to keep track of what’s going on. Things are smooth elsewhere, but these drops aren’t really forgivable.

Luckily, Resident Evil 5 is a pretty special game, so it compensates for these failings nicely. Play it with a friend and the game lights up; you’re swapping inventory, watching your buddy’s back, and generally having a great time. Play with an AI companion and you’ll rue the day you ever picked up the game. The AI in Resi 5 is still just as stupid and inept as it ever was, sticking with the pistol when machine guns are available and generally just making a fool of itself.

One thing that is new for the Switch version is gyro controls. Remember the Wii port of Resident Evil 4, which added Wii remote aiming systems? Resi 5 has received a similar makeover on the Switch, although we hasten to point out that it is optional, so you don’t have to use the new motion controls if you don’t want to. Resi 5 is quite a fast-paced and action-packed game, though, so we do recommend checking out the new control scheme if you’ve got a penchant for experimentation. 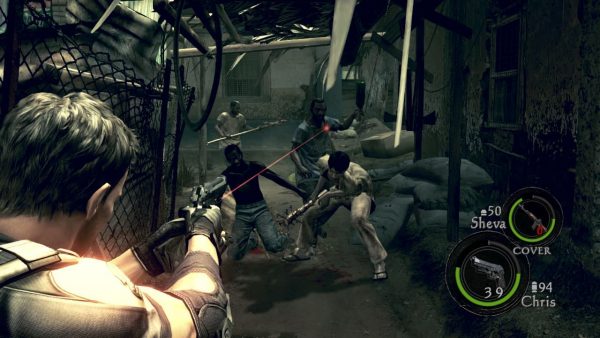 Elsewhere, things are pretty much just business as usual. If you’ve already played Resident Evil 5 on other platforms and don’t want to revisit, then there’s absolutely nothing here to tempt you back. There’s no new content for the Switch version in terms of add-ons or extra campaign chapters, so those of us who exhausted Resi 5 back in its original incarnation probably needn’t trouble this one. Similarly, if you already own Resi 5 on another platform, don’t get the Switch version; it’s technically inferior.

If this is your first time playing Resident Evil 5 and you want to be able to play it on the go – or, indeed, if this is the defining factor for you – then by all means, pick up the Switch port of Resident Evil 5. It’s not perfect; frame rate drops and some ugly graphical glitches keep things from feeling as pristine as they could. Still, it’s Resi 5 on a handheld, and as that experience goes it certainly beats the 3DS Mercenaries game. Worth a look, but don’t worry if you’ve already seen everything Resident Evil 5 has to offer.