Does Rango the Video Game do the Movie Justice?

Despite the fact that Rango the Video Game has a simplicity geared more toward children and it can be cleared in about five hours, it’s still one certainly worth playing. The game already had a lot to live up to before it was even released when gamers were told that Johnny Depp would still be the voice of Rango like in the movie and that Behavior Interactive worked closely with Industrial Light and Magic from the film throughout the game’s creation. Although it is often hard to measure up to high expectations, Rango the Video Game delivers fun with minimal flaws.

If you are familiar with the movie, you will feel right at home in the video game. Rango is a chameleon living in a town called Dirt who desperately wants to become the Sheriff. In the movie, Rango uses a few very tall tales to try to gain respect from those who think maybe he doesn’t quite deserve to be classified as a leader. Rango the Video Game is similar but instead of telling these exciting and fabricated stories, you actually play them out!

As Rango, you will explore different environments, some that aren’t even inspired by the movie, until you uncover a plot that is threatening Dirt’s entire population. Of course, your mission is to save Dirt!

The fact that Rango the Video Game has a user-friendly, automatic target system makes the game accessible for all users yet not nearly challenging enough for experienced gamers. That being said, although combat is ridiculously easy with your gun, there are some incentives to be received if you vanquish your enemies up close. Therefore, avoid the gun and get to stomping because that’s how you’re going to earn yourself some sheriff stars.

The sheriff stars in Rango the Video Game are fun elements. They can be cashed in when you accumulate enough to improve your combat skills and purchase upgrades. Although the battles are fairly easy, the upgrades at least offer a bit more of an entertaining show. 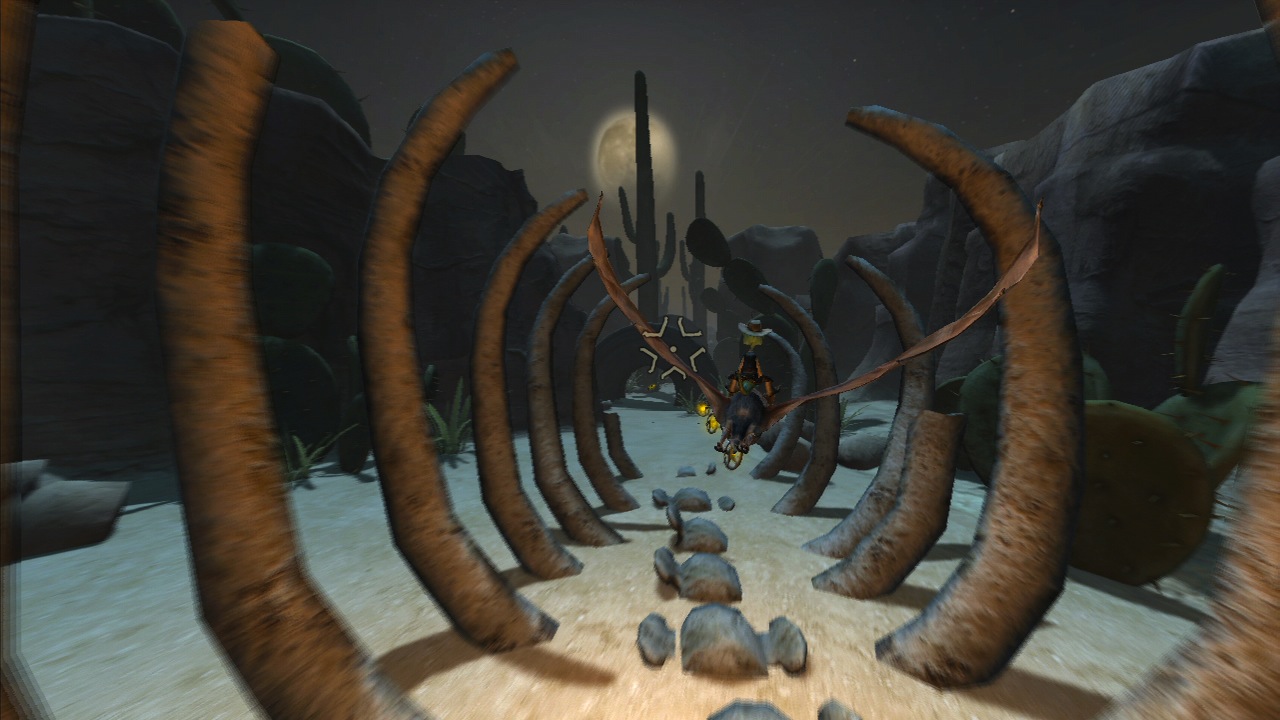 Another cool feature in the game is that there are various vehicles and creatures that you can ride on which can work for or against you when you cross the path of a clan of zombie rats. Battling these rats may be the highlight of the game as Rango’s scrawny arms flail violently at these creatures.

On the downside, you will find that the game can get repetitive, even though it’s so short. Many of the environments tend to look the same and you will swear you’re fighting a few of the groups of zombies over and over again.

Rango the Video Game delivers brilliant graphics. In fact, it’s a shame the game isn’t longer because even though gameplay may become too much of a bore, the environments that get more and more surreal are more than enough to keep your interest peaked. When Rango allows his imagination to get the best of him and you enter an 8-bit universe full of pixelated enemies and vibrant color, the visual contrast is hypnotic and refreshing.

Without a doubt, the graphics are nearly as good as the movie. Whether you are on a roof top fighting zombies at night or strolling through Dirt, there are times you may forget that you are actually playing a game.

From underground minds to dusty desert canyons, Rango the Video Game delivers originality and fun from one scene to the next. It may not satisfy in the combat department but it is invigorating simply to explore the charming environments and see what adventure you’re getting brought into next.

The game takes a surprising finish, ending on an adrenaline high which kind of fools you into thinking that you had even more fun playing the game that you probably really did. Rango the Video Game is delightfully quirky and offers fun adventure but for the high sticker price, it could have been a bit longer.

Should You Try Streaming Your Gaming?

Meta: Have you a love of gaming that you want to build on? Streaming could be a fantastic option for you. Find out more...
Read more
Other

This article discusses how class selection affects the skills and abilities of characters in World of Warcraft and some of the best team compositions...
Read more
Other

Most of the students prefer laptops to stationary personal computers. No wonder, as having a mobile computer is much more convenient. And with quarantine...
Read more
Other

Well received by critics After forays into ancient Egypt and Greece, the latest Assassin's Creed is set in several parts of Europe. The protagonist, Eivor,...
Read more
Other

Online gaming is the best way to develop skills, become socially engaging and spend your day. It helps you to reduce stress, increase vision,...
Read more
Other

"Games give you a chance to excel, and if you're playing in good company, you don't even mind if you lose because you had...
Read more