Are you tired of the mindless drama that run of the mill video games present to you? If you are then you should try your hand at Portal 2. Portal 2 is one of the few games that gives the player a larger than life experience of video gaming. The setting of the game is simply amazing; no wonder the game is already a huge hit in the video game market. The initial version of the game was so captivating that at one point in it became the most popular game in the video gaming circuit.

In Portal 2 there is an expanded list of characters. Each of these characters has been equipped with the skills and the wits to overcome the many hurdles in the dark and devastating chambers of the Aperture science laboratory. The plot of the game is simply out of this world. As you begin playing the game you will soon realise that in order to cross the obstacles you have to take the help of the super computer, GlaDOS. This computer is unlike any other computer because it can guide you through some of the many difficult levels and if you succeed in using your powers right you can excel at the game really fast!

What is so different and interesting about this latest version Portal 2 is that, the player gets to access a completely new mode, the two player mode. This makes the game even more intriguing as it adds a whole new twist to the game, which leaves the player baffled. This aspect helps in building up the suspense and this is what makes the game ever so captivating and hard to stop. Portal 2 is a game you should try if you have an addiction for games that have a sci-fi appeal to them. 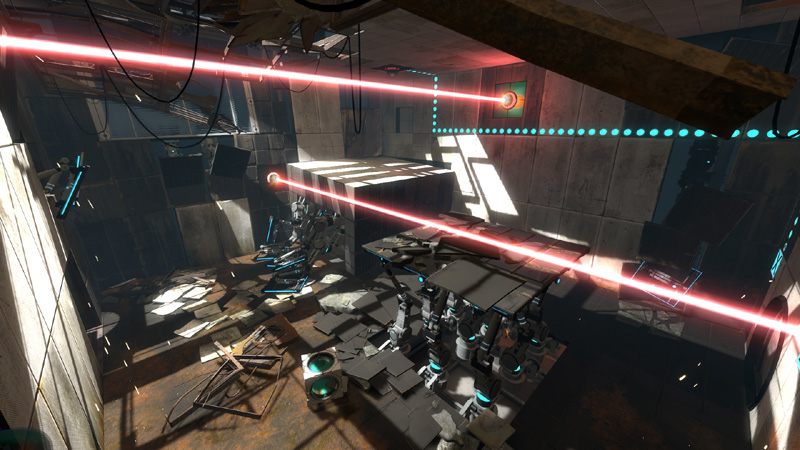 One thing that makes Portal 2 stand out from other similar games on the market is that every element of the game is designed in such a way that it keeps you guessing. Once you begin the game you will notice that there is not one moment in the game that you can rest your grey cells. Every single moment is chilling, keeping you constantly on your toes. Now, why wouldn’t an ardent video gamer love this? Definitely he will and so will you! Also if you are into physics and the interesting twist that it brings to things then you certainly in for great news.

Portal 2 allows you to think beyond physics, beyond the laws that govern us. This gives you a lot of scope to think, to analyse and to use your analysis to help you get better at the game. As mentioned earlier this advanced version of the game facilitates the two player mode which opens up gates for a whole new story, a new plot and a totally different campaign. Recently released this game is already topping the video game list.

The graphics of the game need a special mention! Usually what happens with video games is that with a lot going on in the story, somehow the visual appeal of the game takes a very bad hit. However you will not see that happening with Portal 2. It is a game where there are numerous puzzles to solve and a lot of activity going on in the background. But this in no way impinges on the graphics, which are considered to be the best so far. So hurry, the game is up for grabs at the moment and it is selling like hot cakes!

The Best Poker Games for PS5

Poker is the ultimate game of skill. There’s a reason why it’s always one of the biggest sections of the online casino. Yet poker...
Read more
Movies

Horse racing is one of the oldest sports on the planet with years of tradition which brings us some of the most amazing stories....
Read more