Today I’m looking at the boss of Marvel vs. Camcom, Onslaught. The game itself doesn’t say much about who Onslaught is, but it also bears out that whoever he is, he has a lot of power and is mostly certainly an evil villain of some sort, given the city in the background of the fight seems to be on fire. After a bit of digging, though, I did indeed find out who he was. His origin is a bit complicated, but can be summarized fairly well.

Basically, Magneto, long time enemy of the X-Men and a mutant with magnetic powers, nearly killed Wolverine, who has a metallic skeleton, via ripping that skeleton out of him. Wolverine only survived due to his incredible healing power. Angry that he would go this far, Professor X, who has psychic powers, used them to render Magneto comatose. It was a very startling move given his normal pacifism, but he had simply been pushed too far.

However, while one villain had been defeated, perhaps for good, a new evil soon rose in Magneto’s place, worse than he could ever be. When the professor delved into Magneto’s mind, he unknowingly picked up some parts of Magneto’s psyche, his anger, grief, and desire for vengeance. This became a split personality that eventually took over Professor X entirely and named himself Onslaught.

This is hinted at to a degree in the game. The giant character appears to be some sort of suit made of energy that heavily resembles Magneto’s costume, and sometimes when the fight starts you can see his actual body inside- Professor X, naturally. He also levitates constantly, teleports, and fires metal at you, hinting at the powers he got from the two.

In terms of actual personality, though, there isn’t much to the guy. He is simply evil, destructive, and powerful, with the apparent end goal of destroying everything and reveling in his power. This is somewhat cliché, but it does make him a perfect boss to use in a fighting game. He doesn’t need to be complicated, just a challenge that needs to be stopped for the good of the world, and he does exactly that since his mere presence already calls on many heroes to stop him. 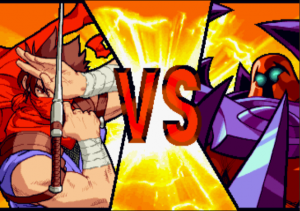 So, moving on to the battle itself, it starts with Onslaught saying a few words to your character. Since I used Strider Hiryu, he didn’t say anything, and Onslaught commented on it, saying he’d settle for Hiryu’s screams since he won’t talk. Anyway, Onslaught doesn’t move like other characters. Rather than walking or even floating around, he teleports from place to place. This means you spend a lot of time approaching him, and that can be dangerous due to his massive size and frequent attacks.

Most of said attacks are very hard to avoid, and should be blocked whenever possible. You do plan to dodge, generally high jumping is best. First, he can charge straight at you in a rush. This could be avoided if you jump clean over him, but given how sudden it is, blocking really is best. Next is a shockwave blast that travels across the screen- I’m fairly sure this one is literally undodgable, but does much less damage than most of his tricks normally, but if you get knocked away by it and you’re far from the edge of the screen, it can do a lot more. 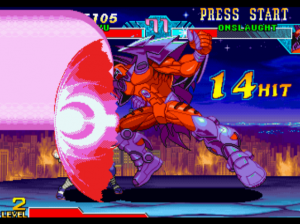 He also fires out a massive laser, similar to the charge in terms of size and damage. This move can be avoided by crouching for normal sized characters, and if you are close enough you can even attack while he is doing it. Next, he can fire out a wave of metal projectiles. These do not seem to appear behind him, so if you happen to be there you can avoid it.

The rest of his tricks are a little less extreme, though still unusual. First, he can summon Sentinels, giant robots made to hunt mutants, to attack you as his assist character. Usually he summons two small ones that drop bombs on your location. These can be destroyed if you choose to attack them, but it would be better to block or dodge the attack. The other version acts like a typical assist character in that the Sentinel appears in the foreground, is normal sized, and charges straight at you. You can hit it away as with other assist characters, though it moves pretty quick, so I wouldn’t recommend it. 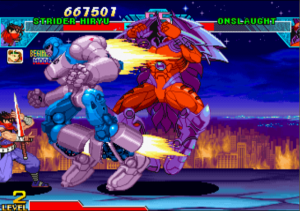 He can fire out green homing projectiles that don’t hurt you, but instead drag you over to him, usually so he can blast you with his laser. These can be avoided by moving under or over them, but there isn’t much time to do so given he will probably be rather close to you. Lastly, he can teleport into the background and summon a clone of one of the characters to do battle with you.

This clone has much less health, but they can fight perfectly well and even use Hyper Combos, the game’s super moves, without filling up the normal super meter. Onslaught will reappear if you beat the clone or last for 30 seconds against them. 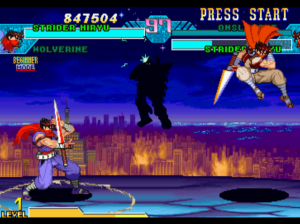 As his giant size may suggest, Onslaught is easy to hit, but does not flinch much. Extended combos can make him flinch, though he will teleport out of exceptionally long ones to avoid taking more damage. His teleportation can make him hard to keep up with, leading to you running into attacks trying to attack yourself. It is best to dodge or block his attacks and wait, because eventually he will end up right in front of you, giving you ample time to strike back. Just make sure you aren’t striking at the same time he is, because his lack of flinching means you attacking is leaving you wide open for his own enormous strikes.

Anyway, after he is beaten, he will scream in pain and vanish in a flash of light- but then he says, “Now… behold my mighty hand!” and appears in a new, even larger form, floating in the background of the building you’re standing on. At this point, only his head will be vulnerable, and he visibly flinches from attacks. You also get healed back to full health, thankfully, but if you lose now you’ll have to do the first half of the fight all over again. You’re going to have to use a lot of jump attacks to hurt him now. 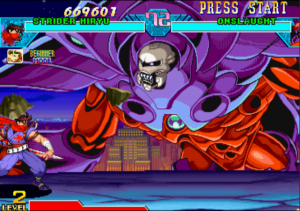 He does retain a few attacks from before- the green energy that pulls you towards him works the same, but now his changed moveset makes it a little harder for him to make use of it, and since you have the entire stage to work with you can easily get distance from Onslaught- or be knocked away by his giant claw attack. This means when the green energy does come for you, it is easier to dodge via dashing under it or jumping over it.

He can summon the smaller Sentinels to drop bombs on you, and will do so if you manage to get a long combo on his head to try and stop your attacks. He can also fire out the metal projectiles like before- but now they go in all directions and cover a much wider area. As mentioned, he has a claw attack, which he uses frequently and strikes for multiple hits, but it won’t hit you if you aren’t near him. One of his worst attacks fires a small blast from his head to the ground. This then causes the ground to explode in that spot, sending a hit player flying into the sky for massive damage. It’s even possible he could do it again on your way down.

Luckily, his aim on that move isn’t great. However, he does use a different version of the attack where he fires multiple blasts at the ground in a row, covering a much larger area. These blasts can be blocked in either version, thankfully. For his last attack, he moves offscreen, then charges at you for a faster claw attack. Like the normal attack, it can be avoided with a high jump.

Anyway, that about wraps up Onslaught. When you beat him, his huge armor will vanish, as he was powering it with his mind, reducing him to the unconscious Professor X. As one final note, after you beat the game once with any character, you can actually play as him! He doesn’t appear on the character select, but if you move your cursor down while on Wolverine, the cursor will move onto seemingly empty space and let you pick him. 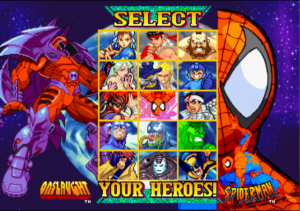 He plays exactly like he did in the boss battle, with the addition that he can float left and right. He cannot crouch or jump, but he is every bit as overpowered as you’d expect, and even transforms if beaten, basically letting you try the match again! The only catch being that normally all of the buttons summon bomb dropping Sentinels(or use his claw attack in the second form), with his other attacks acting as special moves you need certain button combinations to use. Still, after facing the guy, unleashing his power on the other characters yourself can certainly be fun.