For years, Lorne Lanning and company have been trying to create the kind of impressive Oddworld experience that both long-time fans and casual players would grow to appreciate. Well, I think they’ve finally hit the mark with Stranger’s Wrath, a simply stunning achievement on every single count. Graphics? Beautiful. Gameplay? Rock solid, with a keen amount of attention put into the gameplay styles. Sound? Classic Western style, even with some annoyances. The first great game of 2005 has arrived. Don’t miss it.

I’ll have to admit, I haven’t always dabbled into the Oddworld universe. Years ago, when the series was initially launched with the release of Oddworld: Abe’s Oddysee on the PlayStation and PC, I found some elements to be so whacked out and original that I couldn’t help but find myself playing it, even though I got burned out on this style of still-screen action game since beating Flashback so long ago on the Sega Genesis. The journey turned out to be worth it, as there were new challenges around every corner and plenty of hilarious touches here and there to the Abe-speak and character designs. But I never really got back into it when Abe’s Exxodus followed after, although it too had its moments. Lorne Lanning, the man in charge of Oddworld and one of its leading creative minds, then decided to strike a deal with Microsoft and bring the series into full 3-D with the release of Oddworld: Munch’s Oddysee, but the game never really found its audience for a couple of reasons. One: just too darn quirky and not really as accessible as it deserved to be. Two: Halo came out the same day. ‘Nuff said. 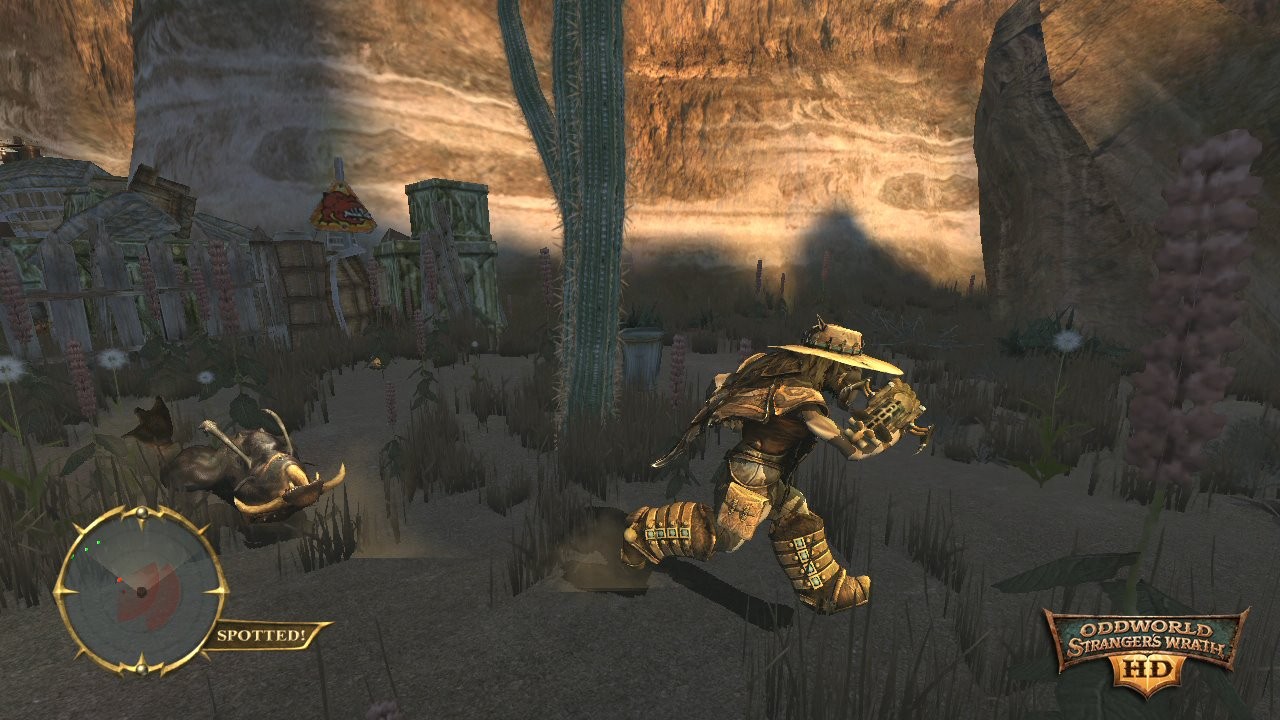 With that, Microsoft abandoned the Oddworld team and left them looking for a new publisher for their next project, initially titled Stranger. Electronic Arts, fresh from acquiring the stellar Burnout 3: Takedown from the dying Acclaim, stepped up, struck a deal, and took helm of what would eventually become Stranger’s Wrath. Now it’s available, a few years after Munch’s Oddysee’s attempt at mainstream success, and I have a feeling it’ll be turning some heads. Stranger’s Wrath may have a troubled past with so much spirit put into it, but the final effort is nothing short of absolutely fantastic gaming.

The game does take different steps in the Oddworld universe than the series is used to, although you can clearly see elements of it seeping in as your adventure unfolds. You take control of the Stranger, a bounty hunter with a Clint Eastwood-like attitude and determination in capturing his prey. He packs speed and a little power within him, along with an interesting gadget that allows him to suck up his prey into molecular form for capture (think the ghost trap from Ghostbusters, but easier to execute). But how to capture the prey? Well, guns are out of the question. However, the Stranger does have a crossbow and with it he finds live ammunition that can be used for different purposes. He’ll need it, as he finds new bounties to collect with each town he visits.

What’s so special about Stranger’s Wrath is that it’s not really just defined as a platforming game nor a first-person shooter. It is, in fact, both. The game wisely fuses the styles of both these genres into a single experience that plays like nothing before it, even though it has those familiar elements in place. With a click of the right analog stick, you can switch between first and third person, which is good as you’ll need both styles to succeed. The first-person allows you to shoot at enemies with precision and puts you at a slower pace, while the third-person view allows you to speed up and navigate ledges and ropes better than in first-person. I found no faults with how the game handles in either form, as Oddworld Inhabitants has made sure that the game doesn’t falter in terms of handling. Both first person and third person views play with ease.

Now let’s talk a little bit about the live ammo for a second. This touch alone makes this game stand head and shoulders above other lackluster FPS titles, just because you have to track particular kinds of ammunition and then stow them for later use with your crossbow. The L and R triggers both come into play, as you can pack two different types of ammo at once. Some, like the scrawny Chippunks, are used to lure one of the bad guys’ cronies into the open for an easy hit. Others, like the Zappflies, come in handy for unlocking doors and electrical devices that can be accessed with a switch. But then you get to the fun ones, like the Stingbees (which can knock out enemies in range of its impact) and the Fuzzles (which act as living proximity mines, and can either be fired directly at an enemy or placed on ledges or doors to interact with whatever comes close to them). There’s an awesome amount of variety here, as each set of ammo serves its purpose and serves it very nicely. If dispatching an enemy in shooter style doesn’t do it, however, you can knock them out in third person with a spinning fist or a head butt, but it just isn’t the same as playing the game as it was meant to be experienced.

The game’s story unfolds nicely. You start out arriving in a small town inhabited by Clakkerz, little Howard the Duck-esque rejects that speak in pure country speak and do everything around the town, from sounding off on an alert system to running the local Bounty Store. This is where you’ll find your initial work, collecting on bounties (preferred alive, but you’ll also be paid less for deceased) and getting directions to each new area. If you get lost, you can always ask a Clakker for help, or just pound them to collect some quick cash. But be careful, because too much negative impact can actually affect how you’re treated when you hit the next town. Your reputation spreads rather quickly here. Each area you visit has a particular boss, each one not exactly eager to be captured. They all pack weapons that will eat away at your precious energy, but they have a tactic that you can find to beat them and put them away, either alive or dead. Best part? If you take any damage, you have a stamina bar where you can just pat off the bullets and easily recover. 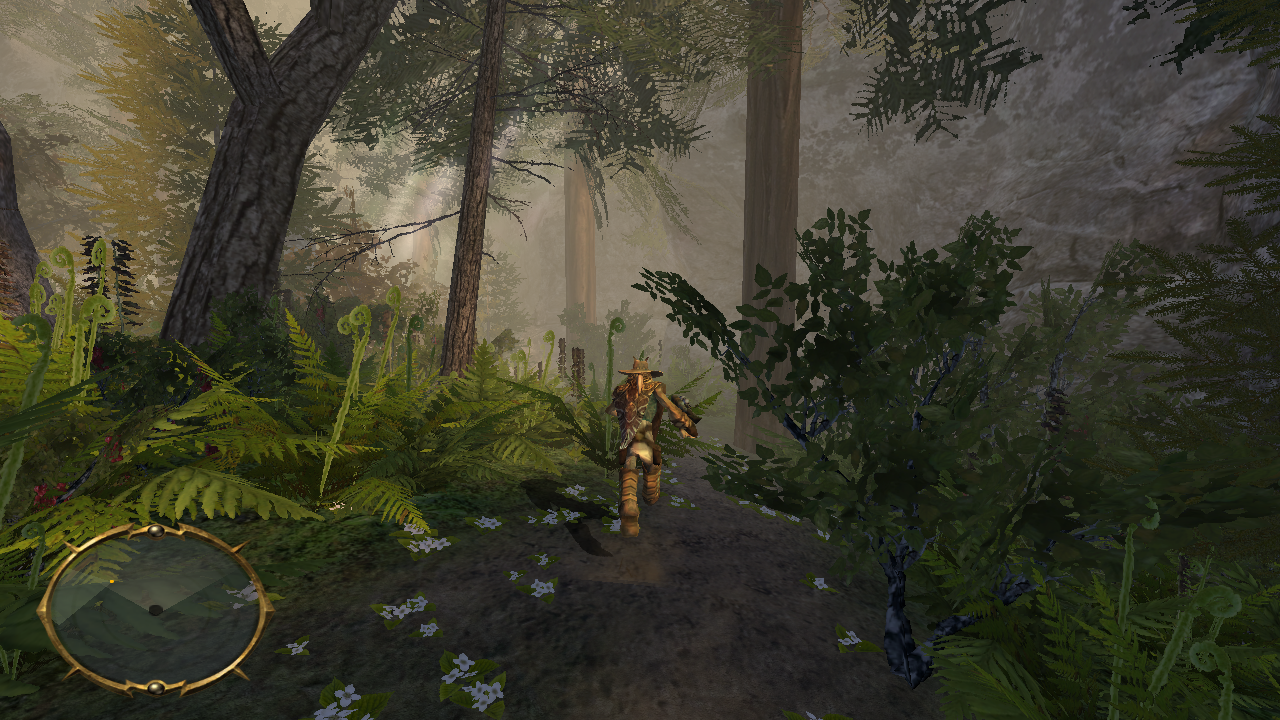 You might think “So the game’s all about going after bad guys and collecting bounty, right?” Sure, that’s how it goes- part of the way through. But then something significant happens involving the Stranger’s past and the game takes a thrilling new direction with a twist that I didn’t see coming. I won’t give it away here, because that’s like going to see something like The Sixth Sense and already knowing what’s up with Bruce Willis. It just ruins the experience unless you find out for yourself, and then the flow of the game moves much faster and makes it that much more satisfying. I was surprised to see such attention put into the game, and it makes me scratch my head as to why Microsoft didn’t stick around to see what was up. Maybe they didn’t read the script, I don’t know.

If there’s one thing I specifically enjoyed about Oddworld: Munch’s Oddysee upon its release back in 2001, it was the game’s look. It had a kind of quirky animation style to it, along with level details that you just don’t find in your typical platformer. But nothing could prepare me for the quantum leap that Stranger’s Wrath would take, as it makes Munch clearly look like a first generation effort. The vast environments are stunning, ranging from dusty Western towns with swinging signs and jumpy townsfolk to unbelievably huge caverns loaded with secrets hiding within its walls and the sun shining down with just the right amount of lighting. The animation is pretty damn sweet as well, right down to the Stranger’s tendency to gallop in third-person view. The frame rate moves steadily at 30 frames per second and doesn’t slow down, and the only real problems I experienced with the camera were with some slight naggings in third-person, but even that wasn’t a major issue. The CG sequences also look dazzling, and interface into the story beautifully.

As for sound, Oddworld Inhabitants also mostly hit the bull’s-eye. The dialogue, created by Lanning himself and members of his team, is well written and executed, especially the Stranger. He lets loose with a mutter similar to that of a mangy cowboy, but doesn’t let anger seep into his voice. Some of the Clakker-speak can get a bit annoying (especially when they try to curse), but never to the point of overkill. The music is perfectly in-synch with the game, right down to the cues during the boss fights and discovery of new secrets. As for the sound effects, they don’t really range much past thumps and gunfire, but they get the job done considering what’s covered. 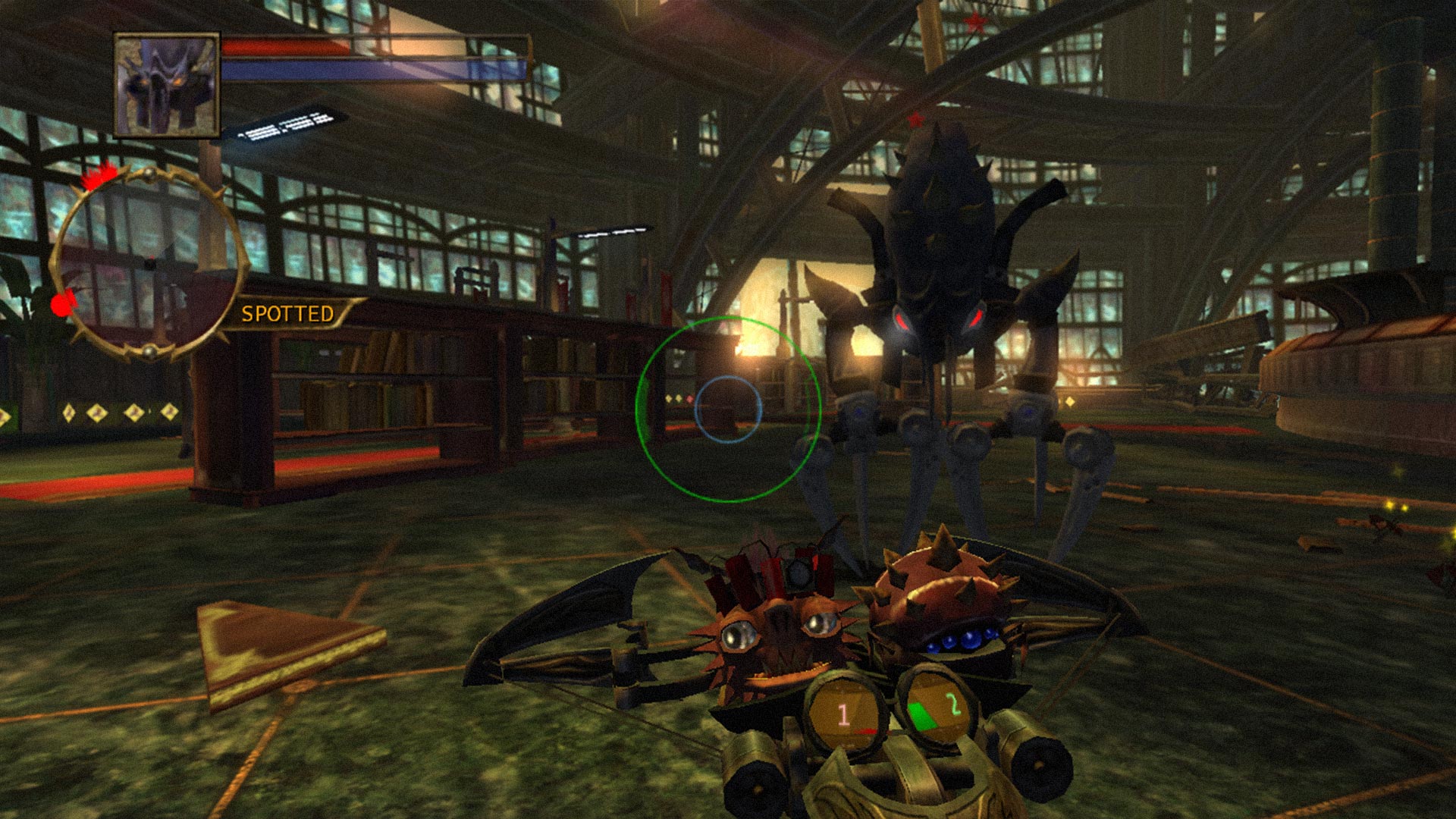 Stranger’s Wrath is a long, satisfying game that will take at least fifteen hours to complete. I just wish there was more, like some extra side quests or even multiplayer. I know that Oddworld Inhabitants isn’t really known for incorporating versus gameplay into its titles, but Wrath should’ve had co-op or even versus battles to check. Xbox Live support would have been a nice touch as well, especially with new level downloads.

However, that’s just nitpicking. Oddworld: Stranger’s Wrath is a game built with determination, enjoyment, creativity, and…dare I say it…care. Lorne Lanning and company have finally come through with what I feel is a game experience that no one should miss, even if you don’t normally bother with the likes of first person shooters and platformers. Between its inventive gameplay, its unbeatable presentation, and a story that actually keeps you involved with its characters, it’s a one-of-a-kind title that will easily compete for Game of the Year once the end of 2005 comes around. This is not just another Oddysee, but a Wrath that you absolutely, positively need to endure.

Microsoft’s Xbox Series X|S consoles are showing no signs of slowing down. The more powerful Xbox Series X has some excellent games to look...
Read more
Other

Back in 1972, the Magnavox Odyssey console represented the start of a major shift in video gaming. As the first recognized home gaming device,...
Read more
0 0 votes
Article Rating