When we were young, our parents imparted to us a very important and valuable lesson. “Do not,” they said, “ride a motorcycle.” We’d seen motorbikes around, of course, but we didn’t quite grasp the safety implications of riding one. Our parents were worried silly about us because motorbikes don’t provide the protective frame of a car or a larger vehicle. Instead, it’s just you, two wheels and a bit of metal. Terrifying, no?

Of course, that didn’t stop many of us here from riding a motorcycle when we were older. If we followed every piece of advice our parents gave us, we wouldn’t have gotten very far into our chosen careers, relationships or life in general. That said, when games like Moto X3M 5 Pool Party land on our laps, it’s quite hard not to recall the advice our parents gave us, especially when we’re watching a man leap over several crates of exploding dynamite with only the aforementioned vehicle as protection.

Let’s back up a little. This game, Moto X3M 5 Pool Party, is the latest in the Moto X3M series of stunt bike games, brought to us by a little Ukrainian outfit called Madpuffers (great name, guys – get in touch and let us know how you came up with it). Madpuffers is not a large studio – it literally consists of four people coding games together – so their offerings tend to be slightly more bite-sized affairs focusing on well-executed core gameplay loops rather than anything complex or sizeable. 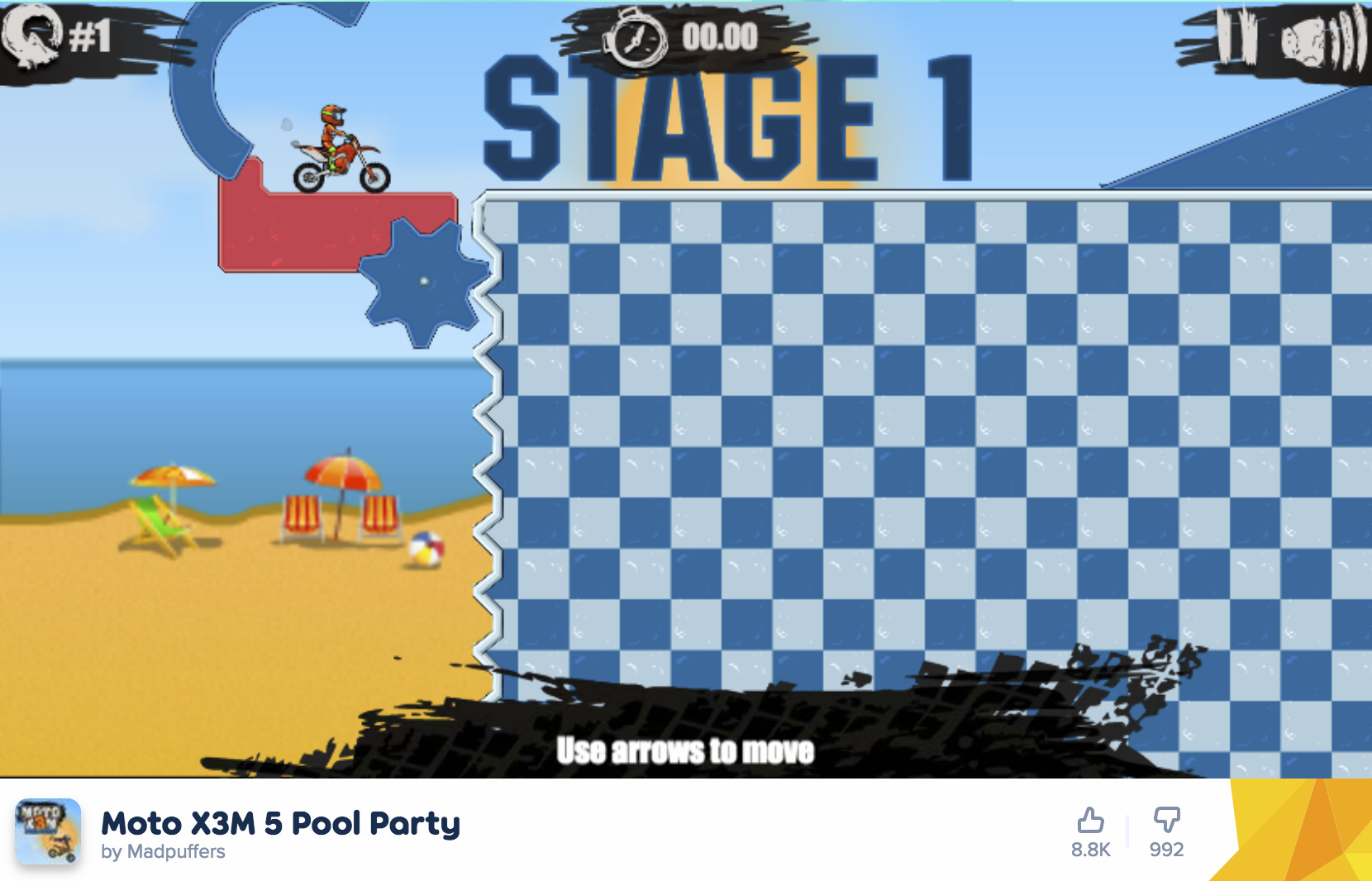 Such is the case with Moto X3M 5. If you’re familiar with this series already, you’ll already know what kind of thing to expect from the fifth instalment, since the gameplay isn’t significantly different from its predecessors. This time around, the well-executed core gameplay loop is a physics-based racing-style platformer in the mold of games like Joe Danger, although sized down a tad and with slightly more modest visuals to reflect the nature of the studio.

That’s not to say Moto X3M as a series suffers for its tighter focus. If anything, its steadfast refusal to implement extra mechanics – world maps, RPG elements, unlockables – is a plus in this world of over-the-top triple-A gaming. It’s refreshing to sit down to a game that is as unpretentious and unassuming as Moto X3M 5 Pool Party, a game that does what it says on the box in such a reassuring way. You do indeed take control of a motorcycle, and you are indeed present at some sort of pool party.

This is perhaps the most extreme pool party we can imagine, though. While it’s true that many extreme sporting events take place with a surrounding party environment to enhance them, we can’t quite imagine a pool party that would condone rapidly exploding chains of dynamite boxes, looping rings that pose a very real risk of death, or pipes that run underwater and probably represent some sort of health and safety nightmare for those who have to maintain them.

Of course, that’s the sort of thing that the Moto X3M games are there for – to help us simulate what it might be like to take part in such a dangerous sport to begin with. If you’ve ever entertained dreams of being an extreme motocross rider, then Moto X3M 5 Pool Party will more than help you realize those dreams. Just like its predecessor, this is an incredibly accomplished little platformer that might not push the boat (or the bike) out too far, but that offers a tight, solid and focused set of levels with a perfectly-tuned difficulty curve and some nicely bouncy visuals to boot.

Controls are simple and intuitive. You use the arrow keys to control the bike, and should you find yourself in an unwinnable situation you simply press the R key to restart the level. Each level has three stars up for grabs if you’re fast enough, and zooming through the level at top speed will earn you the coveted three-star prize. Said stars can then be used to unlock one of the game’s few unlockable characters. Some might say the unlockables are on the weak side, but we like the lower number of characters as it gives the player a sense of accomplishment when they manage to unlock one. 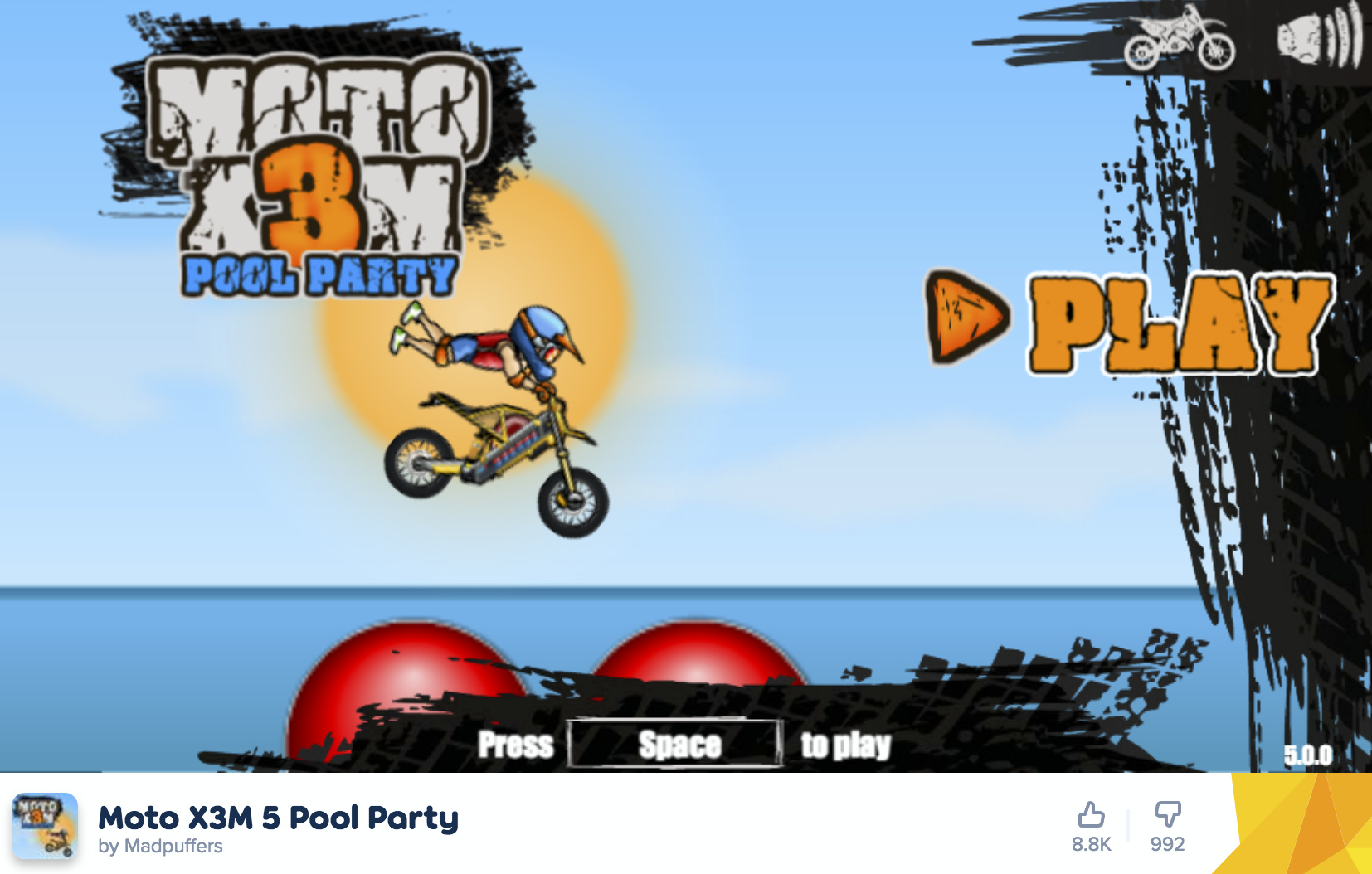 Obstacles in stages are nicely varied, too. There are 22 levels in total, and while Moto X3M 5 Pool Party does occasionally reuse ideas between levels, it never does so in a way that feels cheap or unearned. Stages are nice and short, so if you do need to restart you won’t feel too hard done by, but there are also checkpoints scattered throughout each level to soften the blow slightly. It’s nice to play a game that doesn’t want to stand in the way of progress; Moto X3M 5 clearly wants players to succeed, and gives them all the tools they’ll need to do so.

In summary, Moto X3M 5 Pool Party is another superlative entry into its franchise. Its physics-based racing-platforming hybrid gameplay hasn’t gotten any less fun or compelling over the course of the franchise, but the small adjustments Madpuffers has made to mechanics and control have resulted in a far more enjoyable experience as the series goes on. If you’re new, don’t be afraid to start here – the previous four games are excellent, but you won’t be missing any crucial narrative beats. If you’re a returning fan, you should already have played and completed this one.