When Kingdom Come: Deliverance was released back in 2018, it was one of the year’s most unexpected delights. Marrying an unerringly realistic depiction of early 15th-century Bohemia with a surprisingly well-realised quest system and robust RPG mechanics, the game was released to what can only be described as mixed reviews, but we loved it. Finally, we thought: an RPG that treats its players with the same respect it demands from them.

Fastforward twelve months and the game’s final narrative DLC, Band of Bastards, is released. Be aware that the following review may contain Kingdom Come: Deliverance spoilers; we’ll try our very best to steer clear of the biggest reveals from the main game’s plot, but it’s difficult to talk about this DLC without at least straying into the territory of the main story, so if you don’t want to know anything at all then turn ye back now.

Band of Bastards focuses on a band of mercenaries who patrol Radzig Kobyla’s estates (they are, of course, the titular “band of bastards”). Said mercenaries are led by Kuno of Rychwald, an invention on the part of the game, who owes Radzig a life debt. The protagonist of the original Kingdom Come, Henry, is sent to keep an eye on these unruly fellows and to guide them through Radzig’s lands as they seek to find the source of a series of attacks being made on said lands.

The resolution of this narrative isn’t particularly satisfying, but just like the main Kingdom Come: Deliverance game, it’s the characters met along the way who provide the biggest reason to visit and re-visit this particular extra chapter of Henry of Skalitz’s life. Kuno’s mercenary crew are a hoot to hang out with, and there’s an extensive suite of in-game chatter to listen to between the characters that both maintains the tone of the main game and adds a fun, witty repartee that was sorely lacking.

Perhaps the closest comparison point for what Band of Bastards is trying to achieve with its titular gang would be Red Dead Redemption 2. Those of you who’ve played that game will remember the Dutch Van der Linde gang as a particularly idiosyncratic bunch, and getting to know them was one of that game’s joys. Kingdom Come: Deliverance doesn’t have the same strength of writing that Rockstar’s epic enjoys, but then it doesn’t have a fraction of that game’s budget, either, and it makes the very best of what it has.

What results is a highly enjoyable series of back-and-forths between Henry and the “band of bastards”, as well as a great set of interactions between the crew. This isn’t your typical JRPG-style band of honourable mercenaries; Kuno’s gang are deviants, boozehounds and generally of bad moral fibre, and those types of characters are always the most fun to hang out with in video games. Band of Bastards is almost worth purchasing for the banter (the band of banter, if you will) alone.

Of course, that’s not all the DLC consists of. Band of Bastards is largely focused around combat, so if this is an aspect of the original game you didn’t enjoy then you’ll want to steer very clear of this expansion. There are several choices to make throughout the DLC’s dialogue trees, each of which will slightly change the nature of an upcoming combat encounter, but the general gist of what you’ll be doing is largely the same. There are one-on-one duels, mass battles and skirmishes to enjoy here, each of which contains the same grueling test of skill, reflex and stamina that the original Kingdom Come’s combat demanded of the player. 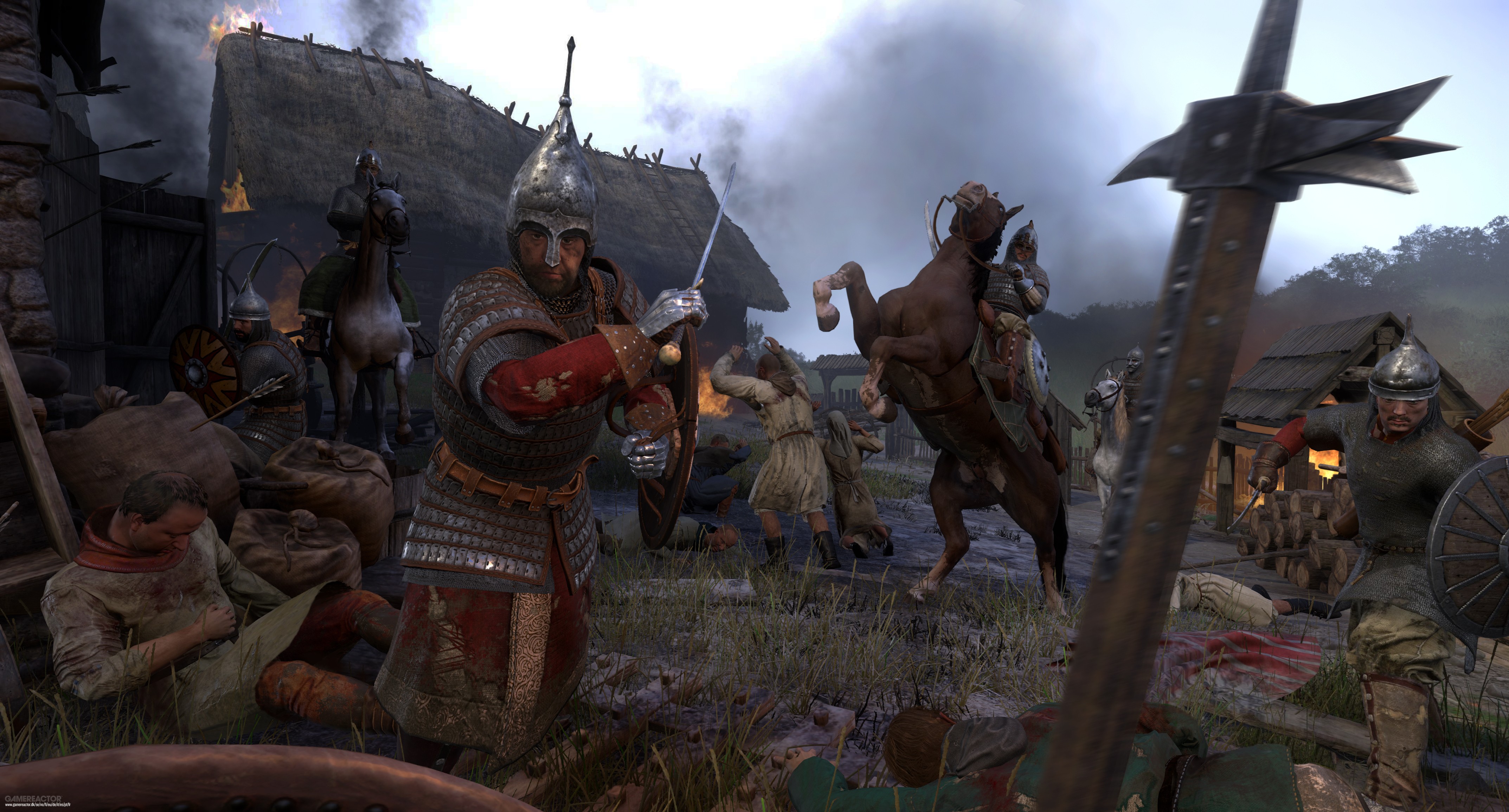 As with the main game, it’s possible to back oneself into a corner and to engage in combat that isn’t really possible to win. This can usually only be done by picking the “wrong” dialogue choices, but it’s still a bit of a downer when a combat situation proves totally unwinnable and wasn’t massively foreseeable in advance. Band of Bastards isn’t long – it clocks in at around two to three hours depending on whether you tackle the additional quest or stick to the story – so it doesn’t have the chance to wear out its welcome, but one suspects that any more combat focus might slightly dilute the game’s intended purpose.

That’s a nitpick, though. Band of Bastards is still great fun, and well worth a look for anyone who loved the main Kingdom Come: Deliverance experience. You’ll get to spend a few more hours in Henry’s world, come to know a cast of colourful and loveable (if not entirely morally upstanding) characters, and engage in some more of the game’s idiosyncratic and unique combat. That should be enough for fans of the game, although the asking price might be a little steep. If you weren’t a fan of Kingdom Come: Deliverance, this DLC won’t persuade you, but lovers of Warhorse Studios’ epic should step right up.

Oh, the sweet, sweet platformer. It’s a bit nostalgic because I’ve been exploring this exciting yet amusing gaming genre since I was a kid....
Read more
Best Games