Superheroes, we are told, do not exist in real life. Our caped crusaders and brooding vigilantes live only on the page, coming to life during fancy dress parties and briefly when movies are made of their exploits. People who do extraordinary things in the pursuit of saving someone else’s life are often called heroes, but many deny the title, suggesting that they’re just ordinary people who did what they thought was right. Superheroes, to put it simply, are not real.

And yet, say we. And yet. What name do we give to supercross riders? These people demonstrate incredible physical daring and fortitude, haring around courses and taking death-defying jumps in their stride. If they’re not superheroes, then we don’t know who is. Sure, the argument might be levelled that they chose to put themselves in these life-or-death situations and that doing so disqualifies them from being superheroes, but Batman does the same thing and we don’t take issue with that. We’re declaring supercross riders real-life superheroes, and if you don’t like it you can take it up with us in the comments.

The latest title to represent such brave figures in video game format is Italian developer Milestone’s Monster Energy Supercross 2 – The Official Videogame. Milestone has something of a monopoly when it comes to motocross and supercross video games, being responsible for the MotoGP series, the MXGP franchise and RIDE, among others. If you’ve played a motocross video game in the last few years, chances are it was created by Milestone.

The original Monster Energy Supercross was something of a curate’s egg. Its verisimilitude, obvious love for its license and wealth of options for all comers were all appreciated by critics, but it got some flak for its uneven physics and less-than-stellar visuals. A sequel will need to address all of these issues while still leaving room for additional improvements and new features; it’s not an easy task which Milestone has ahead of it with Monster Energy Supercross 2.

Thankfully, it’s obvious many of the problems from the original game have indeed been addressed upon starting a single race of Monster Energy Supercross 2. Visually, the game has received a much-needed update; the textures pop and zing as they never did in the original, and a lot of the floaty physics issues seem to have been addressed. Bikes now land after each jump with a satisfying thud, while turning and coasting feel weighted, as they should. All in all, the feel of Monster Energy Supercross 2 is significantly better than its predecessor, which should perhaps be expected but comes as a welcome change nonetheless. 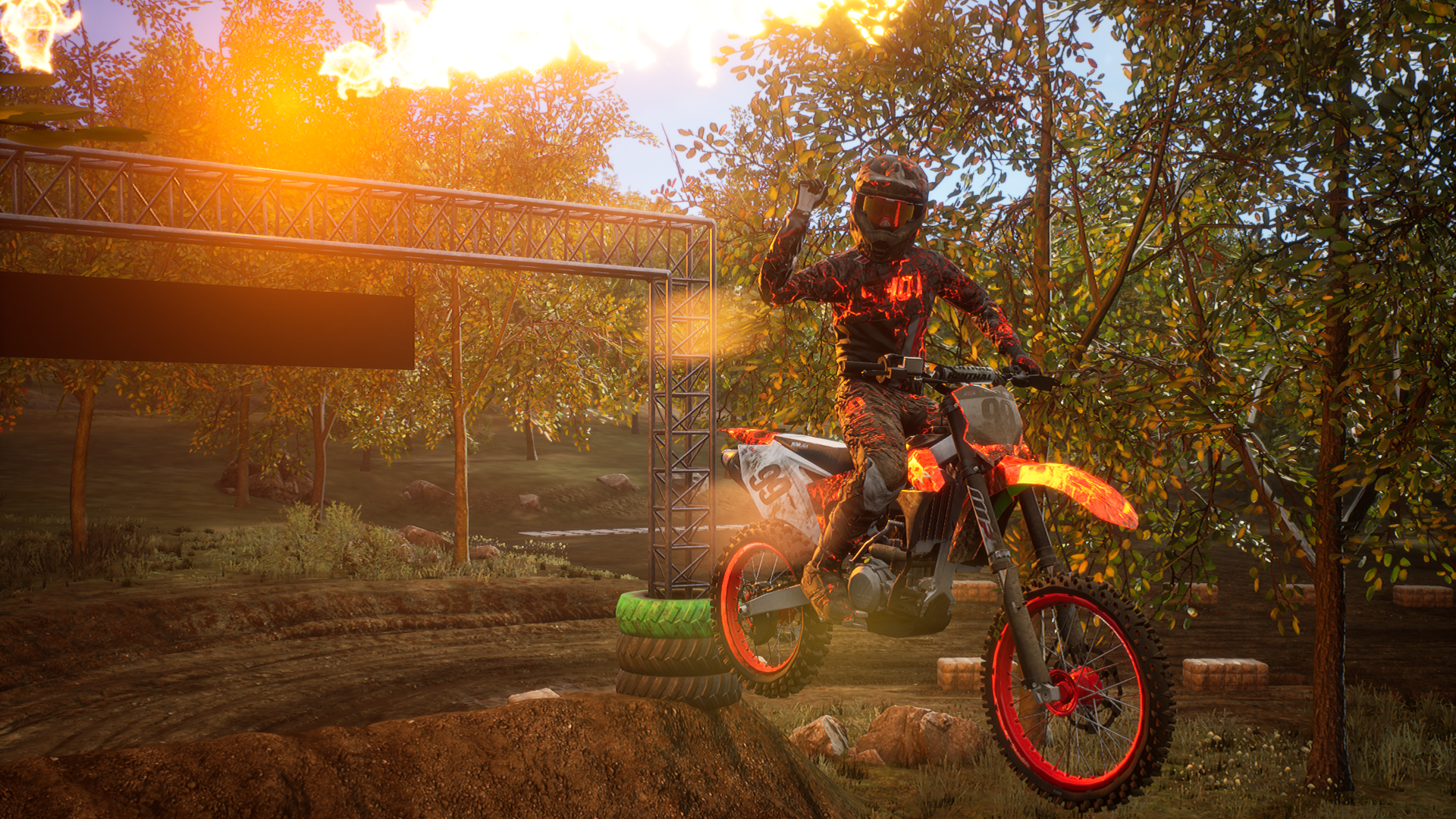 Some of the criticisms levelled at the original Monster Energy Supercross also concerned that game’s sound design. Things have been improved on this front too, although perhaps not as much as we’d like; the sound is better, and everything feels better mixed and balanced than before, but there’s still the occasional sound glitch that throws everything out of whack. Normally, we’d not complain, but it’s clear that Monster Energy Supercross 2 is aiming for immersion, so anything that drags us kicking and screaming out of the experience is unfortunately worth mentioning as a point against the game.

Off the track, things are a little more interesting. The career mode has been revamped, and a welcome change it is – the previous game’s single-player campaign felt a little anaemic and lacking in content. This time around, the campaign is a more full-blooded affair in which your created rider can seek sponsors, sign deals and even meet fans, in a nice personal touch. None of it is more than surface dressing, but the campaign in a game like this exists only to facilitate the core gameplay, and Milestone have done a much better job of not letting the ancillary stuff get in the way of racing fast bikes around indoor dirt tracks.

One of Monster Energy Supercross’s undisputed strengths was its scope of customisation, and the sequel has raised the stakes in this area, too. The character creation of the original felt a little stiff and unnatural, not least because the character models themselves were less than ideal. Monster Energy Supercross 2 doesn’t suffer from this problem, bringing with it over 3000 objects which can be used to customise your character. Indeed, one suspects Milestone may have gone a little overboard here; the customisation can feel a little too in-depth and dizzying, leading to that dreaded “oh, forget it” feeling where default options are chosen simply for expediency’s sake. 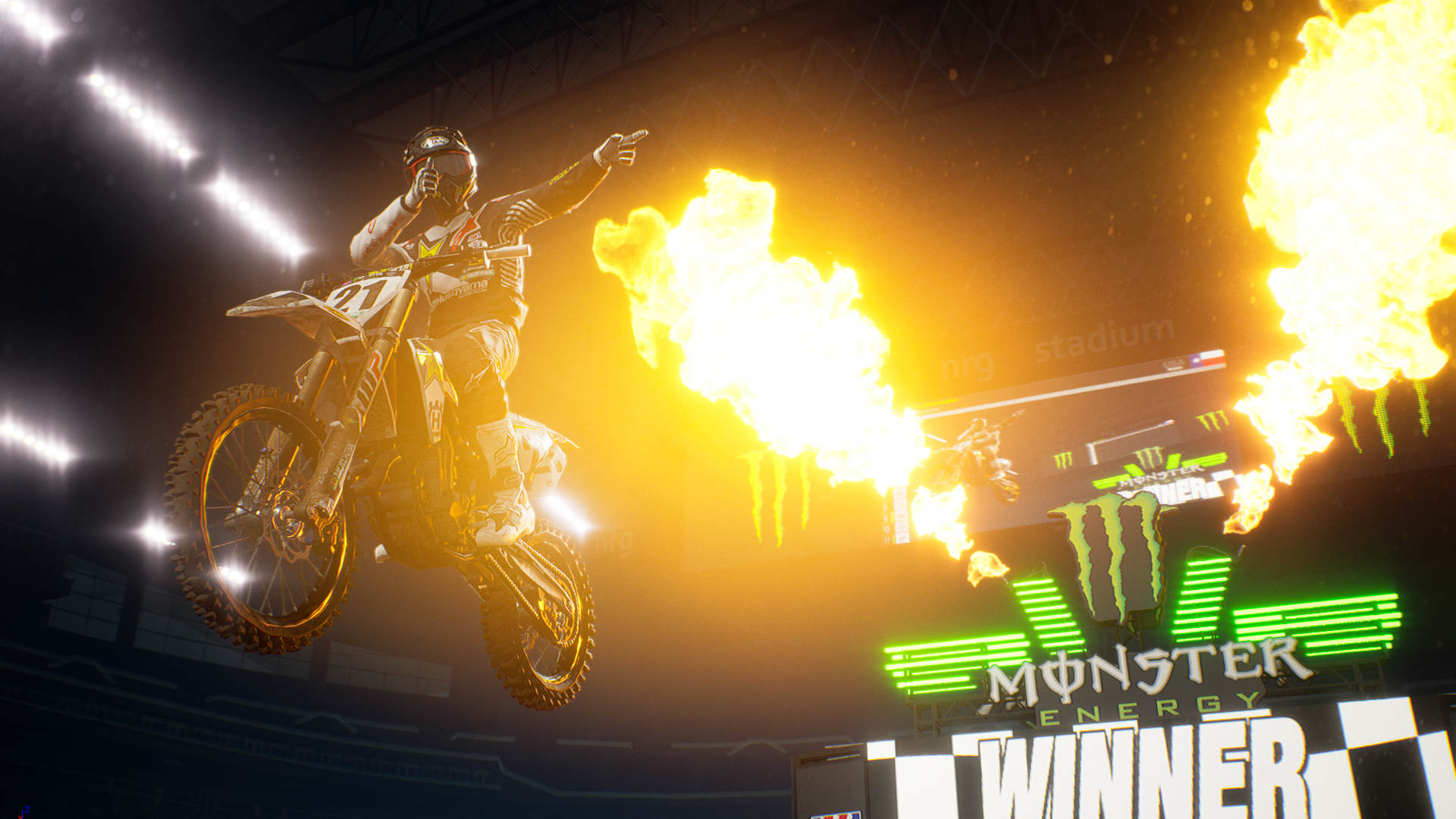 There’s also an incredibly in-depth track editor, which makes a return from the original game. Again, some much-needed improvements have been implemented here which make the track editor a much more enticing prospect this time around. The track editor is intuitive and straightforward to use for the experienced track builder, although it is a little daunting the first time you boot it up and start rootling around. There are plenty of modules and options for the seasoned track builder, but if you’re not experienced with this kind of thing your first few attempts might fall a little flat.

In the end, your decision to buy this game will largely hinge on whether you’re a supercross fan. As an officially licensed game, it doesn’t do a huge amount to entice newbies; there are some new difficulty settings and things that make it easier for non-bike enthusiasts to tune their vehicles and get out onto the track, but this is definitely a game for the hardcore supercross lover. Those who do engage with the sport will find a much-improved version of last year’s title, with new faces to race against, new course geometry to contend with and an overhauled visual element. Monster Energy Supercross 2 doesn’t completely rejig the formula, but it never sets out to. Instead, the game’s mission is to create an engaging, enjoyable supercross simulation, and it achieves that with aplomb. Don’t expect a super-budget game with incredible polish and you’ll have a good time with it.