MOBAs or Massive Online Battle Arenas, have become incredibly popular in recent years.  If you play games on the PC you’ve probably heard of League of Legends or DotA 2.  If you’re a console gamer you may have heard of SMITE.  These games focus on five versus five combat at their core, with a series of objectives to complete.  They’re games that rely heavily on working your team and your experience with these games will often times depend on who you are paired with.  Though these games may not be for everyone they have grown a large audience with nearly 10 million concurrent users across the two most popular games, League of Legends and DotA 2.  Each of which hold major tournaments throughout the year giving away tens of millions of dollars in grand prizes, a worthy incentive for die hard fans to keep playing those games and getting better at what they do.

If you find the concept of working with your team to take down the enemy while building up your own hero’s abilities good, then you may want to consider picking up a MOBA game sometime.  They’re almost always free to play so the cost of entry is low, it’s just a matter of finding which game works for you.  Your best bet is to try out the two most popular ones, LoL and DotA 2, and see which one better fits your playstyle.  We’ve went ahead and broke down some of the key features of each and listed them here if you just want a quick run down of the two.  But there’s many more MOBAs out there besides the two juggernauts and they may just end up being a better fit for you, so that’s what we’re going to look at today. 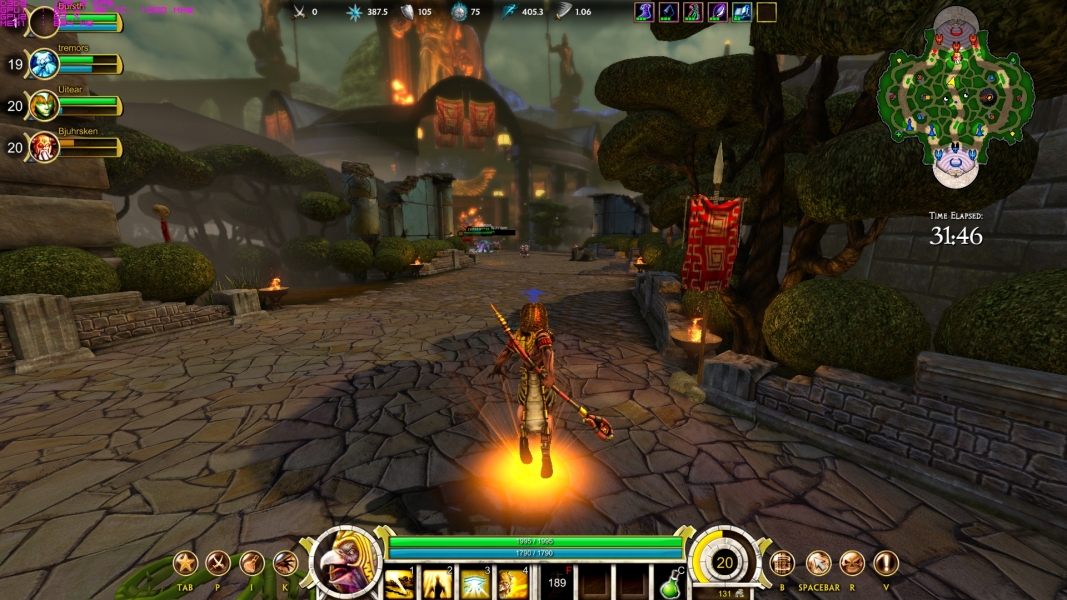 Let’s start with one of the ones that stand out the most.  SMITE is a third person MOBA that is based around mythological gods of different cultures going head to head in a few different game modes.  Systematically the game is very similar to League of Legends.  The shop is similar in that you buy an item and upgrade it along a branching path.  The heroes must be purchased with a few being free for a short time before being swapped out for another group of playable gods.  The jungle monsters do differ though in that each of them provide a small stat boost dependent the particular monster type.  Certain creatures may increase your speed, damage, attack speed, and mana for a short time after killing them.  The main feature that sets this game apart from the rest though is that it is one of the first successful MOBAs to make it over to consoles which greatly opens up the potential player base.  If you don’t have a PC capable of gaming, SMITE may be your only option. 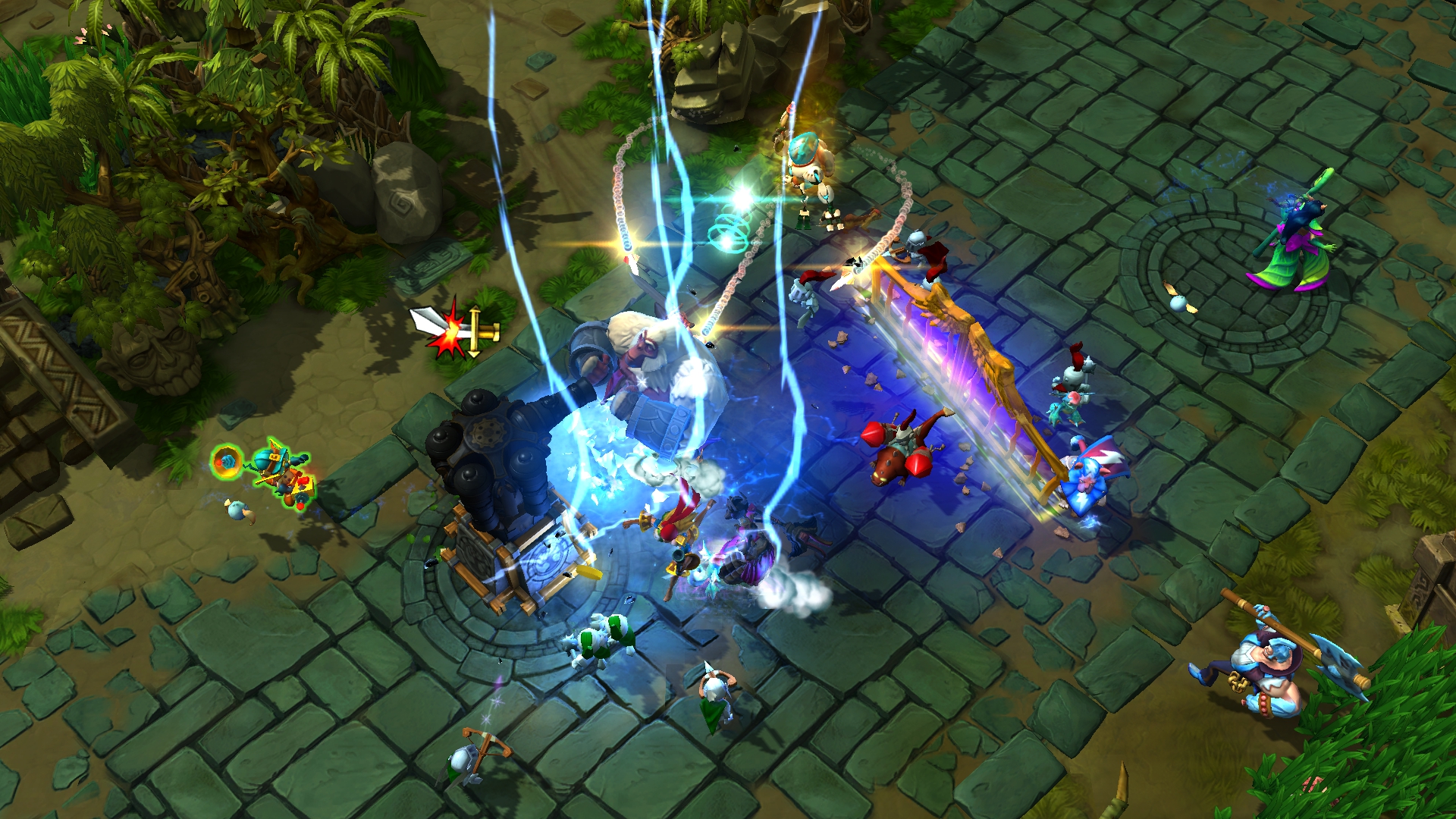 Hailed as the “Second Generation Moba”, Strife focuses on speed and keeping you in the fight.  Functioning very similar to DotA all heroes are free to play all the time and if you want you can choose to purchase skins or dyes for your favorite characters.  The shop is also very much the same in that you buy small, cheaper, components and combine them into more powerful items.  There are a few features that set it apart from the rest that make it feel much more fast paced.  One to note is the courier system, every player in Strife is given a carrier for free at the start and this carrier can bring items to the player pretty quickly with a relatively low recharge time.  You also regenerate health and mana pretty quickly as long as you remain out of combat.  Throw on top of that a small portion of gold and experience is shared with your lane (or the entire map if you solo a lane) so that if someone on your team is doing well they not only better themselves but you too.  Each of these mechanics encourage you to stay out and keep fighting with as little downtime as possible until the match is over.  Which is good if you don’t have a lot of time to spend in a single match. 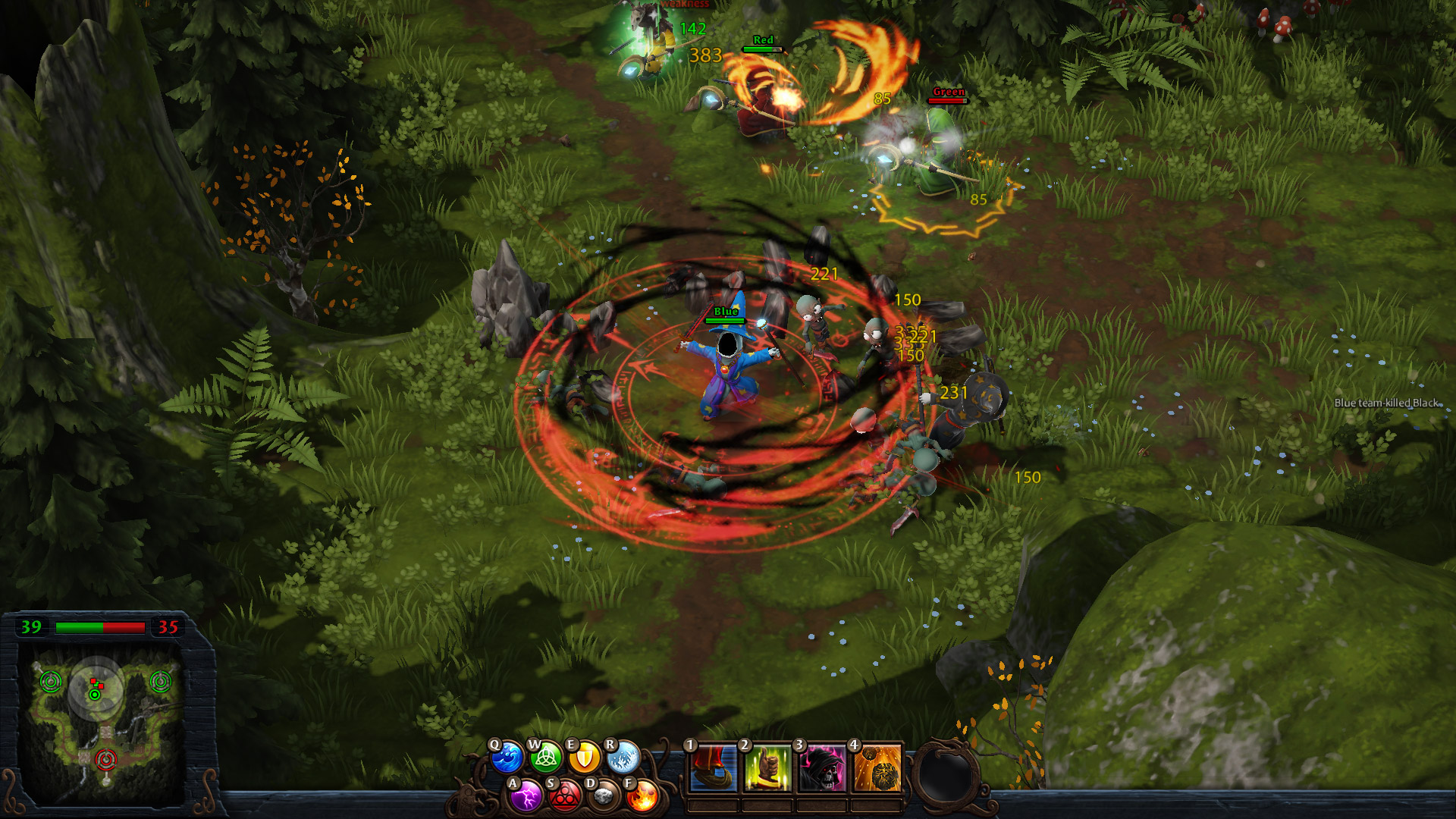 The newest game on the list, Magicka: Wizard Wars is also one that separates itself with unique game modes and mechanics.  Most substantial amongst those differences is the magic mechanic. Instead of starting as a weak character who levels up throughout the match you instead have almost all of your abilities right from the start.  The way this is done is there are several elements, fire, earth, lightning, water, and so on.  Each of these elements behave differently and can be used in multiple ways.  You can charge your character with up to three elements at a time and this can either be multiple charges of the same element, such as earth, or charges of different elements, such as fire and water.  Using multiples of the same element will make the cast more powerful but very basic where as mixing elements can create new ones, for example fire and water make steam.  These elements are used to counter one another and deal with the enemy in pretty unique ways. This makes Wizard Wars have a lot of interesting combat scenarios which is fun, but it also means though that everyone has a wide range of abilities they can cast at any time and you need to know all of them in order to use the proper counters and attacks.

Which MOBA do you play and what do you like most about it?  Is it one of the big two or do you know of a unique one others might like as well?  Let us know in the comments and stick with GamerBolt for all your gaming news, reviews, and more.

If you’re an avid Xbox or PC gamer, you’ll find plenty of options out there when it comes to third-party controllers. You may, for...
Read more