By GamerBolt Team
May 2, 2013
Technology

Looking a bit like something you might find on a star cruiser, the R.A.T. 9 wireless gaming mouse is a peripheral device that’s so packed with features that it’s difficult for some to believe.  Mad Catz is promoting this gaming mouse as an “evolution” or next step, and they’re at least partially right; a quick and simple glance reveals a bevy of buttons and customizable aspects which are both quite useful as well as incredibly cool.  Likewise, the unit is wireless (as clearly indicated), so using it is a very “freeing” experience too (and don’t worry about batter life and recharging, it ships with two lithium-ion battery cells; the idea being, you use one while the other charges so that you can make a “hot swap” as they put it).

For starters you should know that this mouse is compatible with every major OS, as to be expected.  Secondly, this device is truly adjustable in every sense of the word; meaning, you can pinkie grips and palm rests out as needed in order to find a suitable shape or style that suits you well.  If that weren’t enough, you can also adjust the heights of various components. 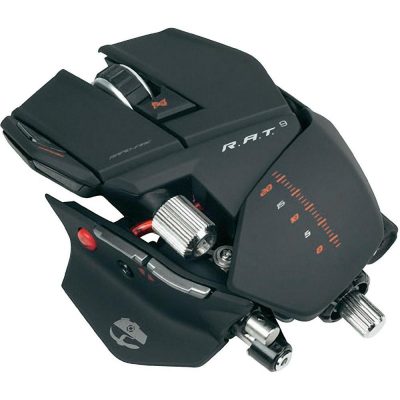 In terms of specific features though, this wireless gaming mouse is jam-packed with goodies.  First off, it’s powered by Zero Latency 2.4GHz Wireless Technology, so you know that you’re dealing with incredibly fast reaction times here.  At the same time there is a 5600 DPI Laser Sensor on board; meaning, you can rest assured that it’s capable of tracking even the most “fidgety” gamer.  If that weren’t enough, there’s also the custom weight system which allows you to actually remove or add weight to the mouse for a more balanced feel.

However, the most intriguing thing about the R.A.T. 9 gaming mouse is its 6 programmable buttons and precision aiming feature.  All together, the R.A.T. 9 has (count ‘em) 8 buttons to play around with (including the standard left and right clicks).  6 of them of course are highly programmable, meaning that you can develop your own custom settings and/or even macro things to them (handy if you’re into mmorpgs).  The device ships with smart technology programming software which allows you to set up the precision aiming speed (which is controlled by a red button on the left side of the mouse).  When you engage the precision mode, you can effectively and instantly slow down the overall speed of the mouse, which makes it easier to make fine adjustments and so forth during gameplay.

At this point you’re probably wondering, “what’s the thumb scroll for”, right?  Well, you can program up to 4 individual DPI settings, and the thumb scroll, it allows you to cycle between them.  While this might seem like a useless feature to some, those who either like to switch between control styles or from game to game will find plenty of use for it.  In fact, once you start using this feature, you’re probably not going to want to use another mouse without one!

So, what’s the bottom line here, is this mouse worth picking up?  In short, yes.  For gamers who need features, this mouse delivers in a very major way.  You can do pretty much anything with it in fact; it’s a multi-tasking monster in all reality. However, you really need to take the time to learn to use and set it up before jumping directly into a series of matches, so there’s probably going to be a bit of a “learning curve” there, for some people.  It would seem that most of the negative reviews of this amazing wireless mouse are coming from people who expected something that was designed for more of a mass audience.  The point is, this mouse is for gamers who really need the extra features because they support their playing style or approach to using a computer in general.  In other words, this peripheral device won’t turn you into a “force to be reckoned with” by itself, but it might help you develop those gaming skills you already possess.