This movie was a disappointment.  With all the publicity this movie received when released, I was very curious about it.  Unfortunately, however, I found that this film has a lot of faults that far outweigh its few (very few) positive points.

The movie’s unnecessarily crude opening scene made my hope for the film’s quality quickly sink, and foreshadowed the many poor quality components to come.  After the opening scene, we are introduced to a ridiculous, fictional celebrity news show called “Skylark Tonight”.  The show and its production constitutes an admittedly rather amusing (and frighteningly accurate) parody of Western celebrity culture.  The movie’s main characters are Skylark Tonight’s producer, Aaron Rapaport (played by Seth Rogers) and the show’s host, Dave Skylark (played by James Franco).  It is quickly discovered that the Supreme Leader of North Korea, Kim Jong-un, is a big fan of the silly celebrity show.  We think that the improbability of this doesn’t need to be pointed out.  Perhaps he is supposed to watch it as a form of comedy! 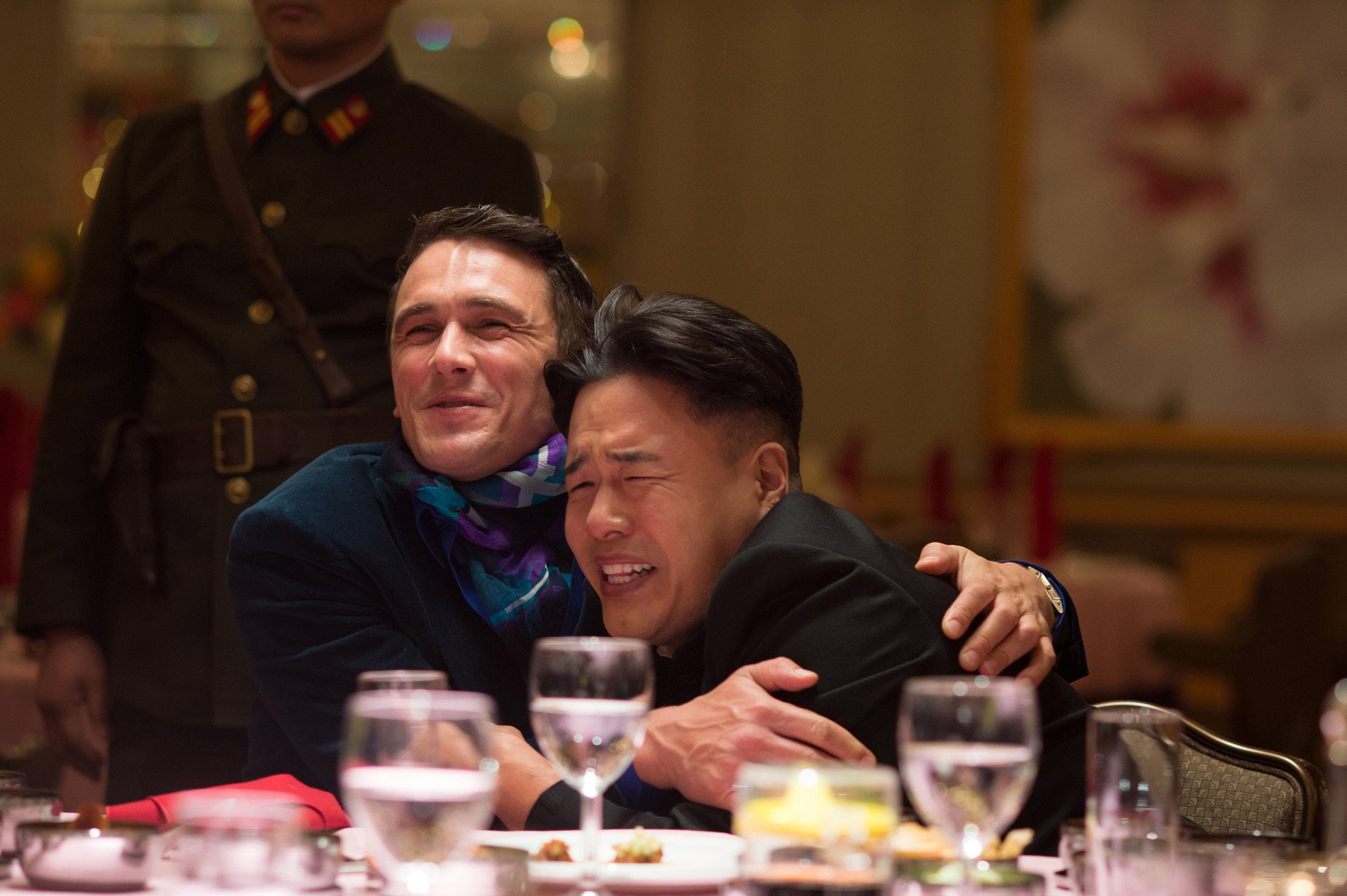 Incredibly, Aaron, the producer, manages to arrange an interview with Kim Jong-un for the Skylark Tonight show.  He is directed to a remote place in China, where he is eventually met by North Korean officials and soldiers, and given the option of interviewing Kim Jong-un in North Korea, but only under very specific conditions.

Aaron and Dave are soon visited by the C.I.A., who have heard about the possibility of this interview.  They tell the two characters that North Korea has the capability of launching nuclear bombs upon the west coast of the United States.  The C.I.A. agents ask Aaron Rappaport ad Dave Skylark to assassinate Kim Jong-un.  They want them to poison him.

They agree to this plan, and go to North Korea.  Soon after they arrive, a fake front of how things are in North Korea is presented to them.  Also, Kim Jong-un is extremely friendly, and quickly wins over Dave Skylark.  Shortly after, Dave Skylark announces to Aaron Rapaport that he will no longer carry out the plan.  Aaron Rapaport decides to try to carry out the plan himself.

When Dave Skylark hears Kim Jong-un threaten to blow up the world, and finds out that food in the grocery store he saw are fake, he starts to reconsider his decision not to carry out the plan.  Soon, however, at the request of Sook, a high-ranking official who turns out to be against Kim Jong-un’s rule, their plan changes from assassination to simply humiliating him in the television interview in order to show North Koreans that he is not a god. 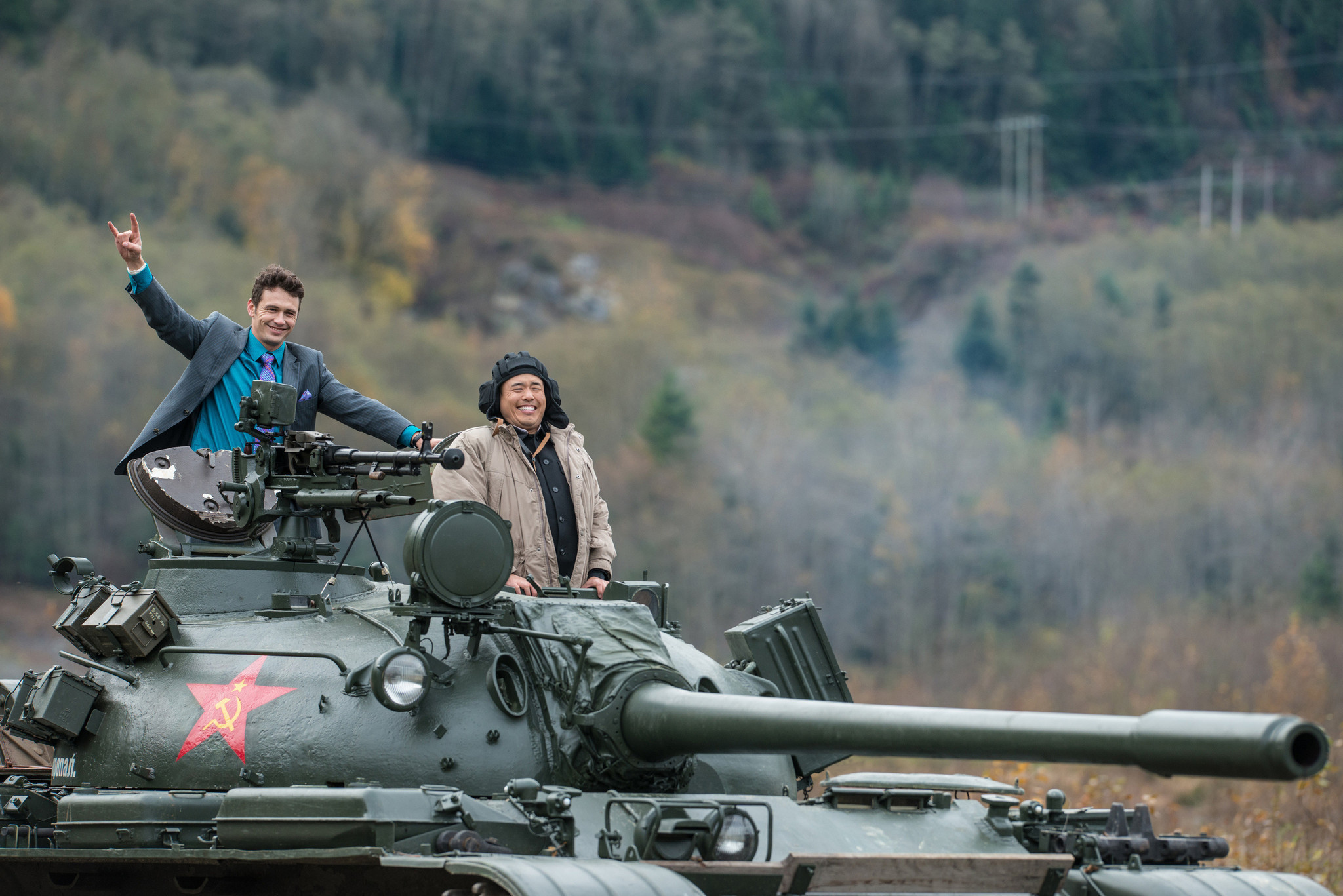 After the interview, Dave, Aaron, and Sook escape.  They steal a tank, and manage to shoot down Kim Jong-un’s helicopter.

We think it goes without saying that the lack of realism in this film is absolutely monumental.  Unfortunately, however, there are many other criticisms, as well.  There are some slightly humorous parts, but the unnecessarily excessive swearing and use of extremely sexist and misogynistic language really lessened my enjoyment of the movie.  Also, as you have probably guessed, the movie is extremely dumbed-down, and has a great number of tedious and pointless scenes.  The sound track also leaves a great deal to be desired.