Once upon a time, the humble 3D platformer was the go-to game of choice for any developer wishing to make a movie tie-in game but not possessing the resources or time to make that game more unique. Everything from Toy Story to Wall-E to Madagascar got the 3D platformer treatment, and while they were all of varying quality, they flooded the market to the point that the 3D platformer fell out of favour in general. We’re not blaming those licensed games specifically for that, but they played a part.

Fastforward to 2019 and the tie-in game is all but dead. The mobile market has made sure that large triple-A tentpole licensed releases don’t really exist any more (other than for generic properties rather than specific titles – see Middle-Earth: Shadow of War). A 3D platformer revival is well underway, though, so what better time to revive not only the genre but also its licensed component? Enter Ice Age: Scrat’s Nutty Adventure, which is based on the long-running Fox-Disney animated movie series.

There’s no new Ice Age movie on the horizon, so Scrat’s Nutty Adventure is likely intended as a reminder that the franchise exists before the supposed sixth instalment is set in stone. Ice Age has largely lain dormant since 2016, when the last feature film and the last major short film in the series were released. Whether Scrat’s Nutty Adventure is testing the waters for a prospective sixth movie or whether it’s just trying to remind kids of the Ice Age franchise is unclear, but regardless of its goal it still needs to work as a stand-alone game.

If you’re after plot, then you’ve probably come to the wrong franchise. Scrat’s Nutty Adventure doesn’t even try to reach the “lofty” heights of the Ice Age movie franchise in terms of its setup. You, naturally, are Scrat. Your acorn, which is the object of your desire, is locked away in the ancient Scratazon Temple, and you must get it back. To do so, you must…collect…all manner of things. How exactly doing so will help you get the acorn is immaterial; you must simply collect, for this is a 3D platformer.

For a guide on how Scrat’s Nutty Adventure plays, imagine a second-string 3D platformer from the mid-to-late 2000s: Tak and the Power of Juju, Ty the Tasmanian Tiger, that sort of thing. Scrat’s Nutty Adventure brazenly disregards a decade-plus lineage of platformer development and returns to the golden age when plots were thin, collectibles were many, and levels were strictly linear. Whether or not this is a good thing will depend entirely on your mileage.

Of course, for the game to work, it also needs to be a good approximation of those values, and in this regard, Scrat’s Nutty Adventure…well, we wouldn’t say it “succeeds” per se, but it stops short of failing. Structurally, the game is laid out in a linear fashion; we’re more in the territory of Super Mario Galaxy than we are Poi or Super Mario Odyssey, although to invoke any of those names feels like it’s doing Scrat a service it doesn’t quite deserve or earn. 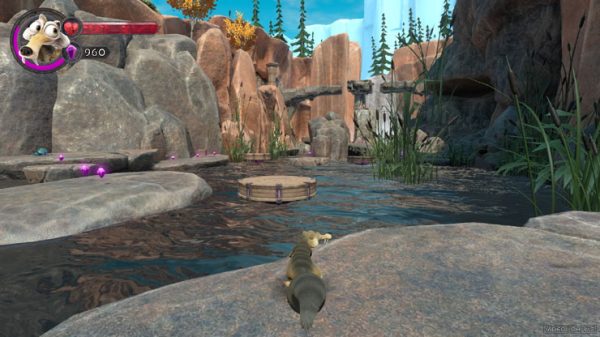 If you play this, you’ll get everything you expect to get from a platformer; icy levels, volcanic stages, water levels, and plenty more. There is combat – a rather alarming amount of combat – but it’s breathtakingly basic, amounting to little more than just punches and kicks. Most enemies can easily be dispatched with a few button presses, and even the boss fights don’t feel like they’re designed to challenge in any significant way. This is not a game designed for veterans.

That said, there is a certain charm to it. Scrat’s Nutty Adventure revisits many of the classic locations you’ll recognise from the Ice Age movies, so if you or a little one in your family can’t get enough of Ice Age, then there are many worse ways to spend your time. There are also very light backtracking Metroidvania-y elements as you unlock new powers, meaning you can head back to old levels and find new collectibles. This never interrupts the game meaningfully, though, and there’s almost no reason to do it beyond the classic 100% completion gambit.

Scrat’s Nutty Adventure feels like a game designed entirely to blueprint. There are no surprises here, no twists on a classic formula, and no attempts to think outside the box. What we have is a completely functional 3D platformer that never tries to be anything more. It’s hard to imagine today’s kids becoming as enthralled by this as they might once have been by Jak and Daxter or Super Mario 64. It’s clear that developer Just Add Water (that’s right, the Stranger’s Wrath HD people) isn’t interested in creating a timeless classic.

If you have kids to entertain – or if you’re hung over and want a 3D platformer that won’t trouble your grey matter even slightly – then Scrat’s Nutty Adventure will suffice. For everyone else, it will probably prove too slight or inconsequential to devote much of your time to it. If you’ve exhausted literally every single other 3D platformer out there and just can’t get enough of the genre, then you’re almost duty-bound to play this, but it’s safe to avoid it if you consider yourself a “serious” gamer. Great for the young’uns, though.

How To Bet On Sports Safely In The United States?

Arkane Studios’ Deathloop was one of the most hotly-anticipated games of 2021. It married the studio’s usual emphasis on modern immersive sim gameplay with...
Read more
Editor's Picks

The video game industry and its platforms have evolved alongside technological developments. There are a variety of devices, including smartphones and computers, on which...
Read more
Best Games

Until Dawn is one of the most compelling horror experiences of the last few years. The PS4 exclusive is a loving homage to slasher...
Read more
News

Download Superheroes Mods for Minecraft Bedrock 1.20.0 and 1.20 for Android