Based on the final JK Rowling book in the Harry Potter series, not to mention the stunning and highly critically acclaimed final two movies, you might expect Harry Potter and the Deathly Hallows Part 2, the game, to transport you to a mystical world filled with complex battles, exciting spells and detailed exploration of the places so beautifully created throughout the series. Unfortunately your expectations are likely to be dashed the first time you raise your metaphorical wand. Unlike the earlier games representing the earlier films, the last two titles in the series have been nothing but third person cover shooters, with different spells effectively representing different weapons. This in itself might not be a problem, but with many inaccuracies between game and film/book, uninteresting level designs and a very short main campaign, even diehard fans might find it hard to discover much worthwhile.

Unsurprisingly the game of Harry Potter and the Deathly Hallows Part 2 takes you through the journey of the film that bears the same name. The urgent mission to discover and destroy the last of the remaining Horcruxes, and with them the evil incarnate Voldemort, is the theme running throughout. One thing that this particular title does have in its favour is the ability to play as numerous different characters from the film, from the famous Harry Potter himself, to Hermione, Ron, Neville, Professor McGonagall and more. While this means you should be able to see the story unfold from many different angles, in reality all of the characters play in much the same way. As any story elements to the game are told through cut scenes rather than gameplay anyway there really isn’t too much advantage to playing other character.

The basic premise of the latest Harry Potter game is simple. Enter a new level, spot the very obviously placed obstacles to hide behind and prepare to face wave after wave of deatheaters. Very occasionally you may face a different sort of foe, such as the guards at Gringotts, but on the whole it will just be deatheaters, and some more deatheaters, and just when you thought there couldn’t be a single deatheater left in the world, well there are some more.

If you forget everything you know about the spells detailed in the books and films then you could have some fun with those options available. You can switch between different spells with ease and each has its strengths and weaknesses, such as Expelliarmus which will break an enemy’s Protego shield, or Stupefy which resembles something like a pistol. Of course those experienced in Harry Potter lore will soon come to the realisation that an Expelliarmus spell should actually make an opponent drop their wand, and Stupefy should in fact inflict a brief stun to your enemy. If you can get over these inaccuracies, then switching between the different spells on offer to defeat the bad guys as soon as possible is one of the more interesting elements of the game. 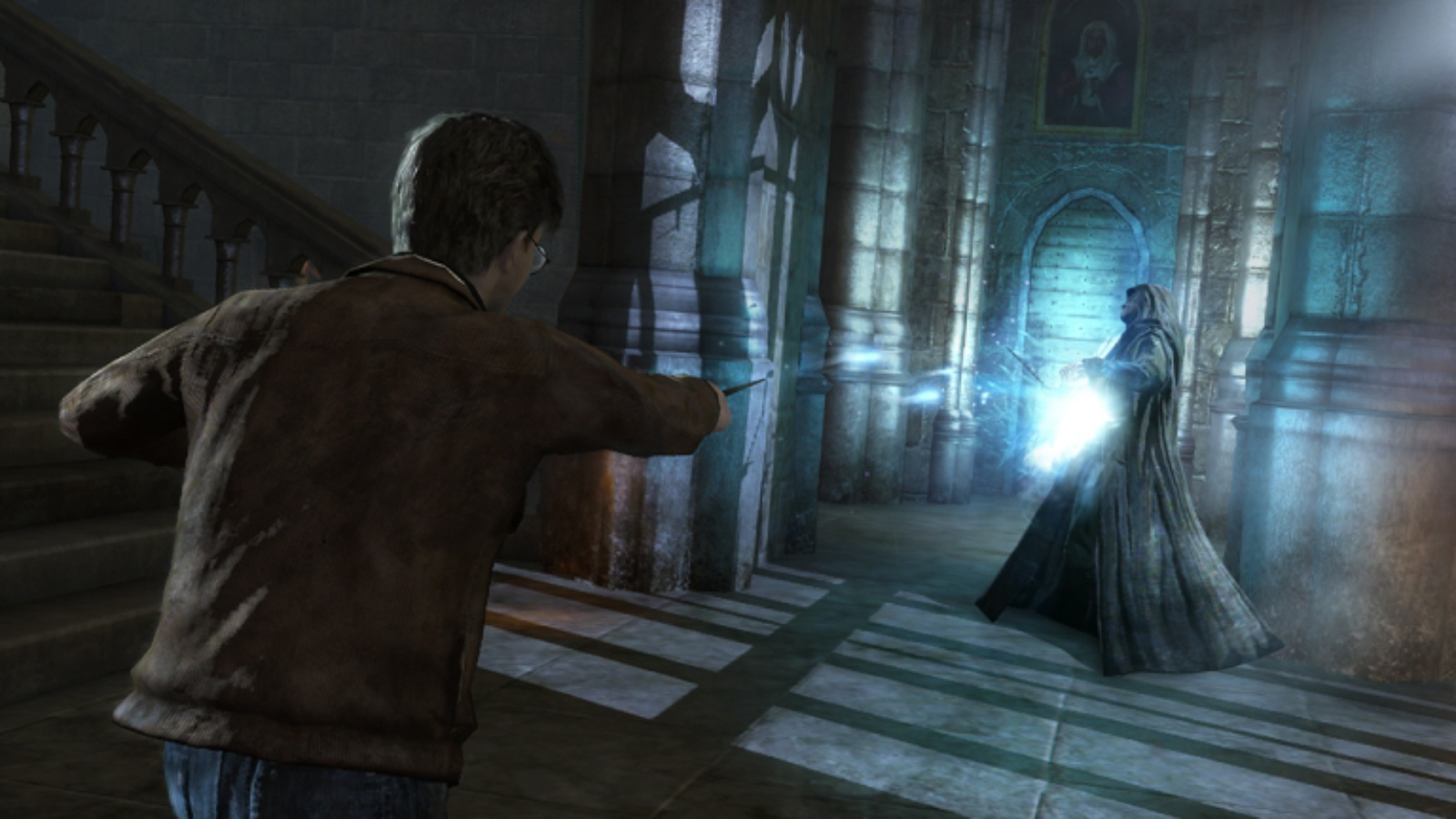 Even so, there are only so many ways to kill a deatheater, even with an arsenal of varied ‘weapons’, so don’t expect the novelty to last too long. Fortunately the game only lasts for 3-4 hours so you won’t be bored for too long, and as there is almost no reason to replay the campaign upon completion this game will almost certainly be relegated to the shelf to gather dust before long.

On the whole Harry Potter and the Deathly Hallows Part 2 is an attractive game. The menus are clean and easy to operate, and, although it may play like any other third person shooter in the marketplace, there isn’t a HUD to detract from the enemies swarming toward you in the familiar scenes such as Hogwarts and Gringotts Bank. Unfortunately while the characters and scenes are an improvement on the game’s predecessor, the animations of your favourite characters are almost laughable, particularly when combined with some diabolical lip-synching.

If owning everything even vaguely related to the Harry Potter franchise is important to you then this game will make a nice addition to your shelf. As a game though, even the most diehard fans are likely to be irritated by the obvious inaccuracies and lack of any imagination in the level design.

Whether you’re looking for a new hobby to pick up just ahead of the holidays, or you’ve finished playing through Ghost of Tsushima for...
Read more
0 0 votes
Article Rating