Battlefield 3 stands out from the current crop of multiplayer FPS look-mommy-I’m-a-soldier-man by being not about you.  In most other games of this type, even games with class systems, a few good players can really unbalance a match and rocket one team to victory.  Your prowess and skill with your pretend sniper rifle, your speed in whipping out a digital illusion of an MP5 will make the difference between victory and defeat – and more importantly, whether your can knock over 20 guys in a row and unlock the next killstreak perk.

Battlefield 3 has the same basic ingredients – real-world-esque battle scenarios, progressive rewards and upgrades, realistic weapons, the immersive invitation to pretend you have sweated and drilled endlessly to mold yourself into an elite fighting soldier – but presented in a very different context.  You won’t make a difference by yourself, and you have to accept that pretty early on, which makes multiplayer (do we even bother with single-player campaigns in these games anymore?  If so, why?) a dicey proposition.  If you can get on as a member of a clan, or at least with two or three good buds on voice chat, you’re good to go.  If not, though, you’re going to be at the mercy of whatever ritalin-enhanced squadmates you can dig up on the server.   Once in a while, you’ll get that magical balance of mechanics, spec ops, and AT soldiers crammed into a helo, tear-assing around a map laying waste to everything like the winged horse of Death himself – but often as not, disorganization will lead to defeat, your teammates will wander off to shoot and something shiny, and all your efforts to turn the tide of a losing fight solo will probably be for naught.  Heroic as you may be, you are just a spec on Battlefield’s vast and complicated terrain – which happens to be bountiful with Battlefield 3’s great equalizers, vehicles.  Hoo boy. 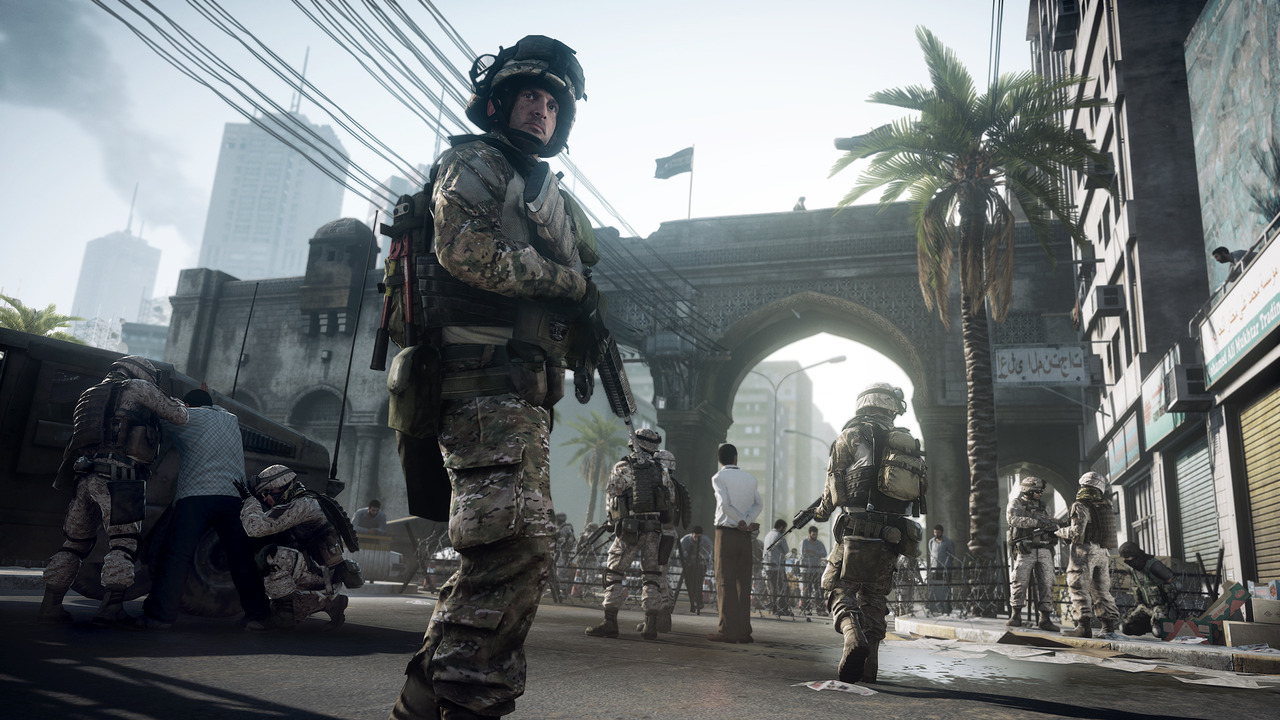 Whereas almost every other military FPS franchise has given up any serious attempt at vehicular combat, Battlefield 3 continues the tradition of reveling in vehicular mayhem.  You might be the best video-game shot this side of the international date line; your sniper rifle means bupkis when an armored convoy is bearing down on your position.  Which is all right, if you make it out alive, because you can probably find a helicopter to hijack within a few minutes’ sprint to help you even the odds, although you might engender a TK if you cut in line (there’s always a line…).  Of course, then you have to be suddenly worried about SAM emplacements, rocket troopers, fighter jets…

All game players – indeed, all humans, all life forms – are inextricably entwined in the magnificent and unbreakable Circle of Life.  Battlefield 3 has the Circle of Endless Destruction Through Hardware, which is almost as beautiful, and probably more fulfilling.  The endless opportunities to pit one expensive toy against another in countless  destructive combinations is the truly saliva-inducing aspect of this franchise.  You quickly get beyond the quotidian plane vs. tank, jet vs. jet., APC vs. AAA, and into much more interesting, borderline scandalous scenarios.  Like tank vs. chopper.  Sure, you want to get up close because you  don’t quite trust your WSO’s command of the Hellfire controls – just be sure you know that MBT’s main gun elevation to the millimeter, or you’re going to find your pretty chopper suddenly quite bright and explodey, and yourself respawned in an inconvenient location.

With the invention of blockchain technology, it's now possible to earn money while playing games. Crypto games are a trend that’s taken over the...
Read more
Editor's Picks

Grand theft auto or GTA, as most gamers fondly call it, is one of the top-rated video games out there. Whether you’re a newbie...
Read more
Other

EVE Online is a special community-driven spaceship MMORPG that has been on the market for almost 20 years. Despite the fierce competition and an...
Read more
Other

Apocalyptic tales may be as old as time, but post-apocalyptic flicks have never been rifer on the silver screen as much as in the...
Read more