Have you played Rec Room yet? If not, you should definitely give it a try. This first-person VR experience lets you loose in a high school-style setting and allows you to try out a bunch of games created by users, including twists on old favourites and new, innovative games alike.

Don’t worry if you don’t have a VR headset, though; Rec Room is entirely playable without one, although the experience is significantly augmented if you are lucky enough to have a VR set. With or without VR, though, you’ll find that Rec Room is home to a huge amount of great gaming experiences, many of which can stand shoulder-to-shoulder with professionally-developed games. Here are 15 great Rec Room games you should check out.

1. Quest for the Golden Trophy 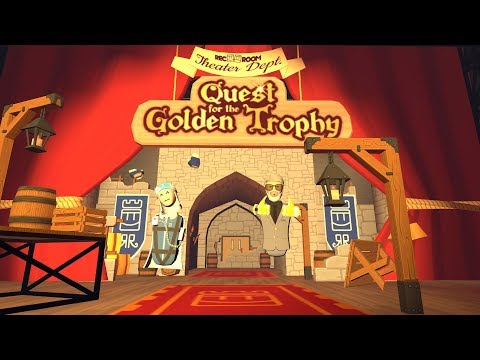 In this fantasy RPG-style game, you and your friends must team up to battle the monsters who have stolen Coach’s Golden Trophy. You’ll need to use teamwork to overcome said monsters, and it’s actually a pretty tricky experience; don’t expect this one to be a walk in the park just because it’s a Rec Room game. Golden Trophy demonstrates how creative and outside-the-box you can be with a game creation kit like Rec Room. 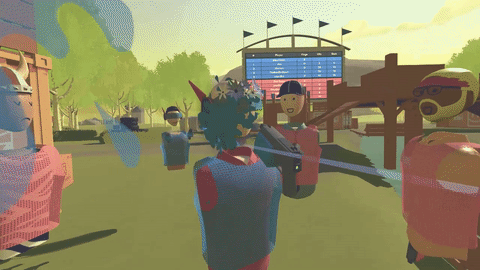 What more needs to be said about Paintball? In this classic shooter-style game, two teams must go up against one another in order to splat each other senseless with paint. With plenty of areas to hide and stage ambushes around the map, playing Rec Room’s Paintball in VR becomes quite a tense experience, so this definitely isn’t the kind of game you’re going to use to relax. Still, it can be a huge amount of fun with the right people on your team, and it stops you from getting hurt by playing real paintball, which is a win, right? 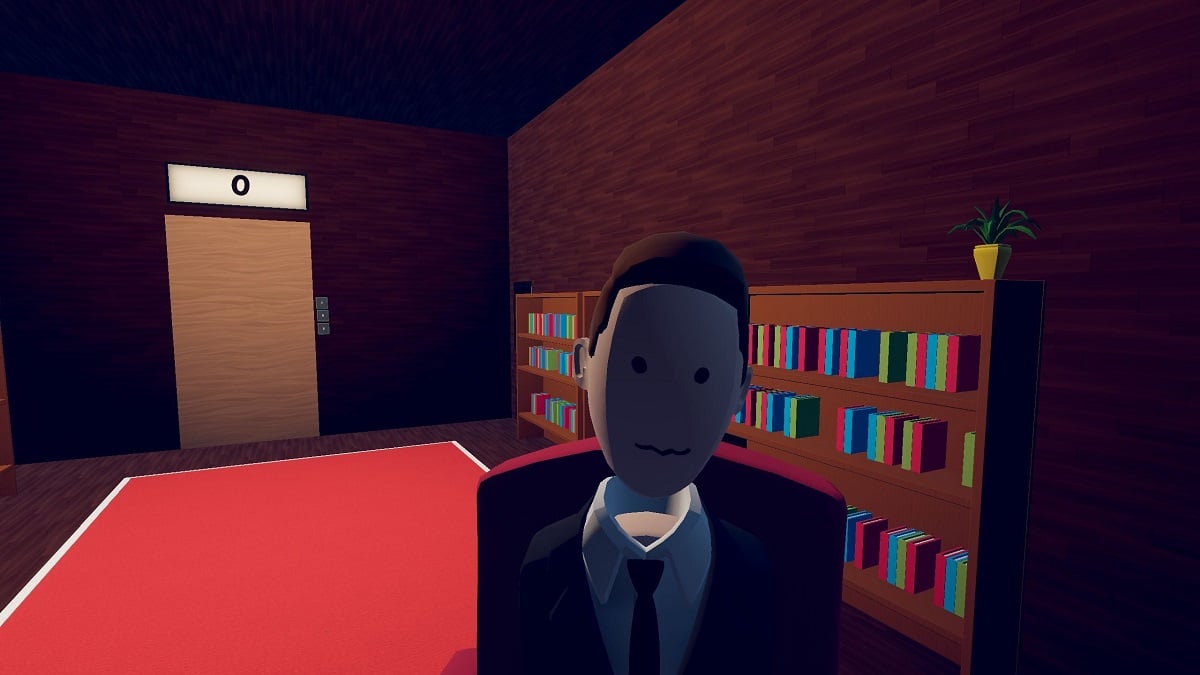 The setup for this one is pretty simple: you’re in a bunker, and planes are flying overhead, dropping bombs on your head. You’ve got to escape the bunker before it collapses in on you. Since this is an escape room-style experience, if you want to escape the bunker, you’ll need to solve a series of puzzles and be quick on your feet. It’s not a particularly long game, but in our opinion, this is one of the better Rec Room games you can play right now. Its puzzles and tense situations will stay with you long after you’ve finished it. 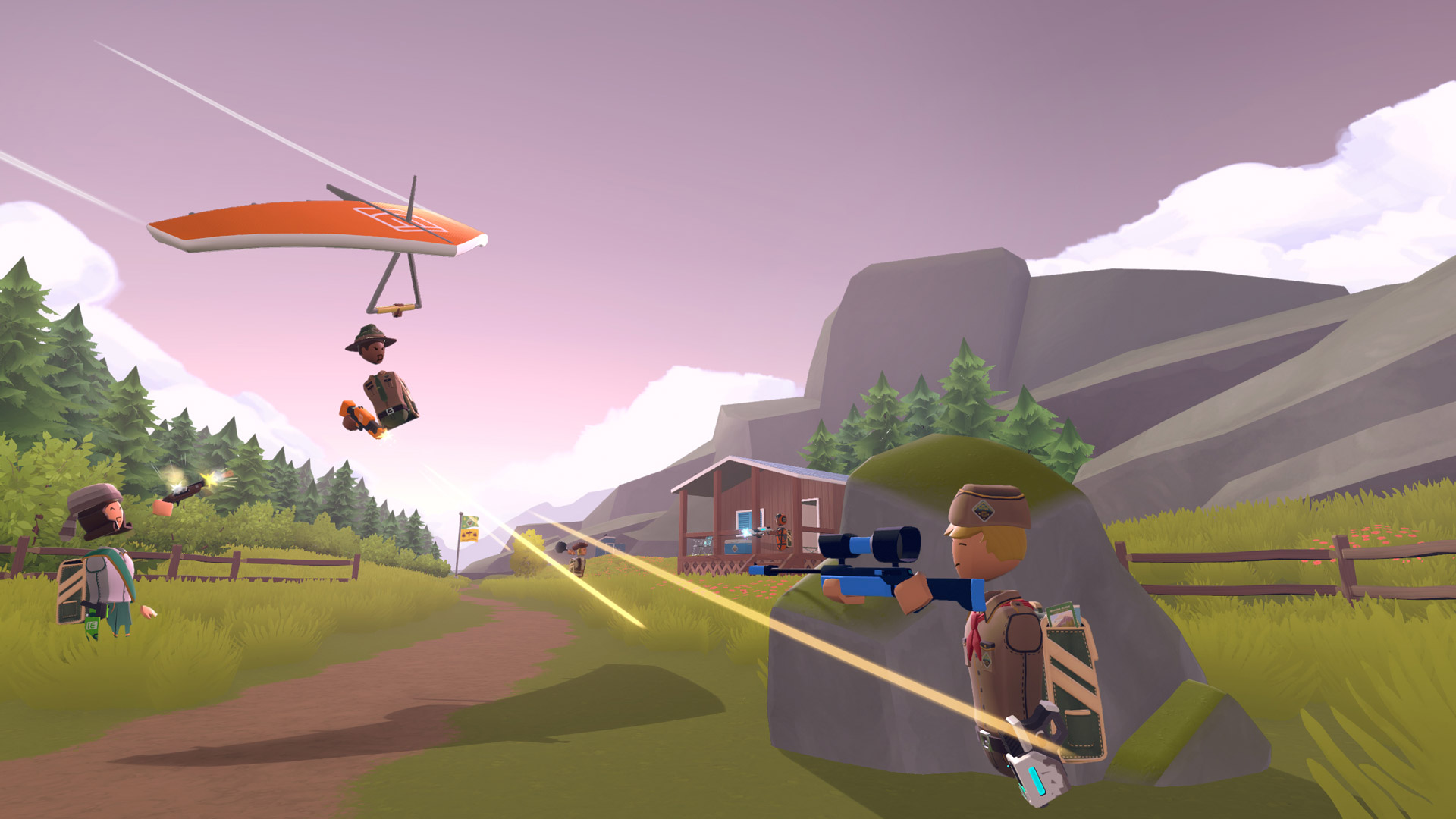 If you’ve played games like Fortnite or Apex Legends, you’ll know the basic setup for Rec Royale. Sixteen players are dropped into a giant map where they’ll scavenge for gear. Only one player will be left standing at the end of it, and the available play space gradually shrinks, meaning players must eventually duke it out rather than simply hiding and waiting for other players to do their dirty work. The Rec Room version of this formula is just as fun as you’d expect it to be.

Let’s face it; Rec Room was effectively made for dodgeball, and that’s very much evidenced by this offering, which puts you in a high school gym and asks you to hurl dodgeballs at your friends’ heads. Happily, though, there’s absolutely no physical pain involved here, so it’s a much more consequence-free version of the classic game of dodgeball. Teams of three take each other on, so you can team up with two buddies to battle against those mean bullies. Just make sure you don’t accidentally break anything if you’re playing in VR, eh? 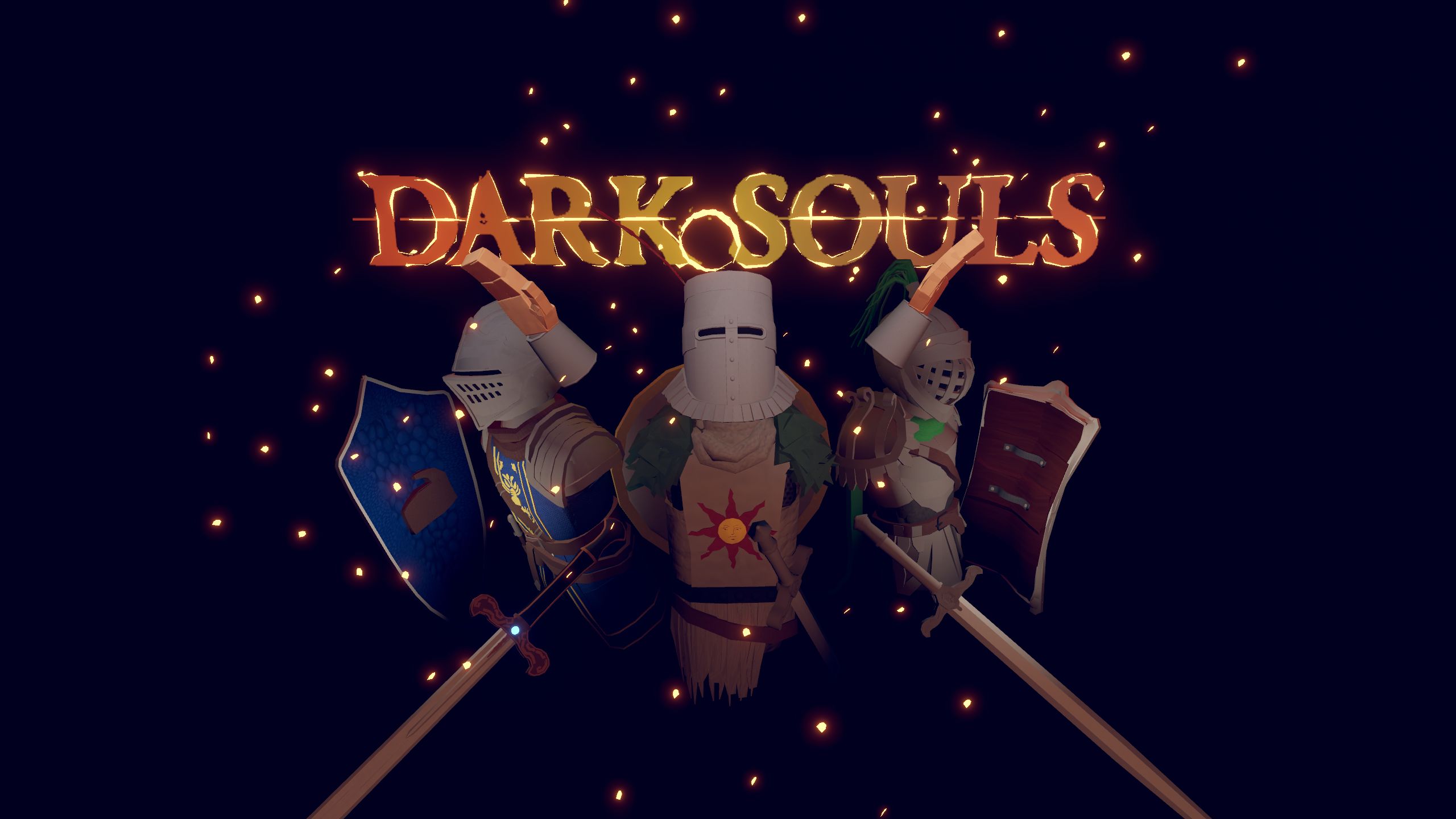 Yeah, there’s a Rec Room version of Dark Souls. We’re putting this one on the list not because it’s objectively one of the best Rec Room experiences out there, but because like Quest for the Golden Trophy, it demonstrates what you can do with the format. The dying, decaying world of Lordran is recreated here to an admirable degree; the Rec Room Dark Souls room is beautiful and majestic, just like the original game, and you can even play it alongside your friends! 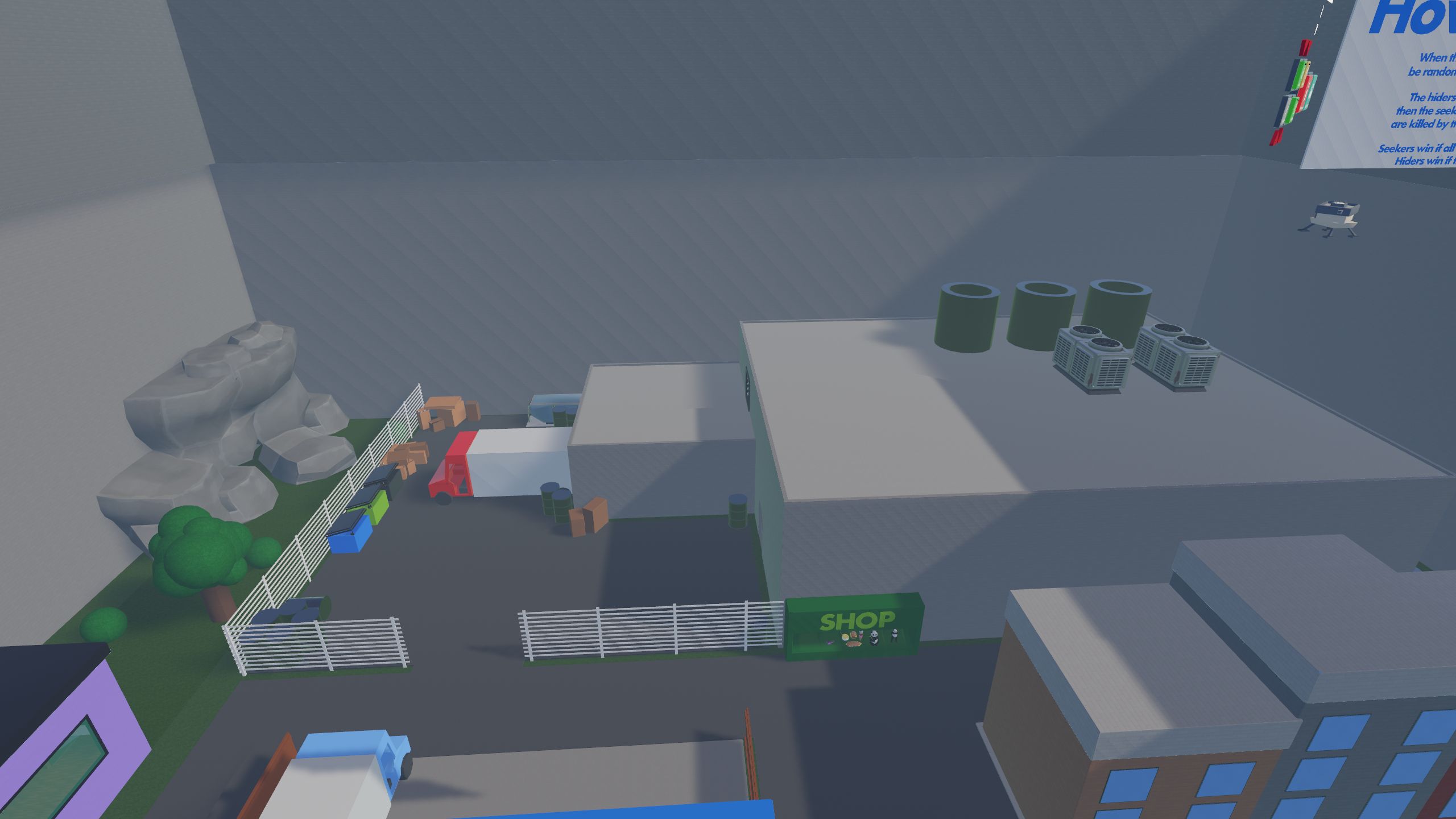 Rec Room is at its absolute best when it’s recreating classic playground games, and nowhere is that more true than in this excellent rendition of Hide and Seek. Blue and red teams must take each other on in a game of hide and seek; players find a spot to hide in, while other players hunt them down and try to discover their positions. This game is made all the more enjoyable by the fact that there’s an element of verticality, so you’re not limited to winding streets and alleyways.

See what they did there? Not Scary Game is, in fact, a Rec Room horror experience, and we’re putting it here because it’s largely emblematic of how horror works within this game. Because interactivity is relatively limited in Rec Room, you’ll mostly be playing walking simulators and spooky ghost train-style rides, and this is one of the better ones; it manages to spook you regularly, taking strong influence from the cancelled Silent Hills playable trailer P.T.

Now here’s a Rec Room game that knows exactly what it is. Escape Room Haunted Mansion is, well, a game in which you must escape a haunted mansion. It’s spiritually akin to survival horror games like Silent Hill and Resident Evil, and like those games, this one has plenty of fun scares to discover. Be sure to stream yourself playing this one if you’re going to check it out, because you’ll want people to see your reactions when you encounter some of its most spooky surprises. 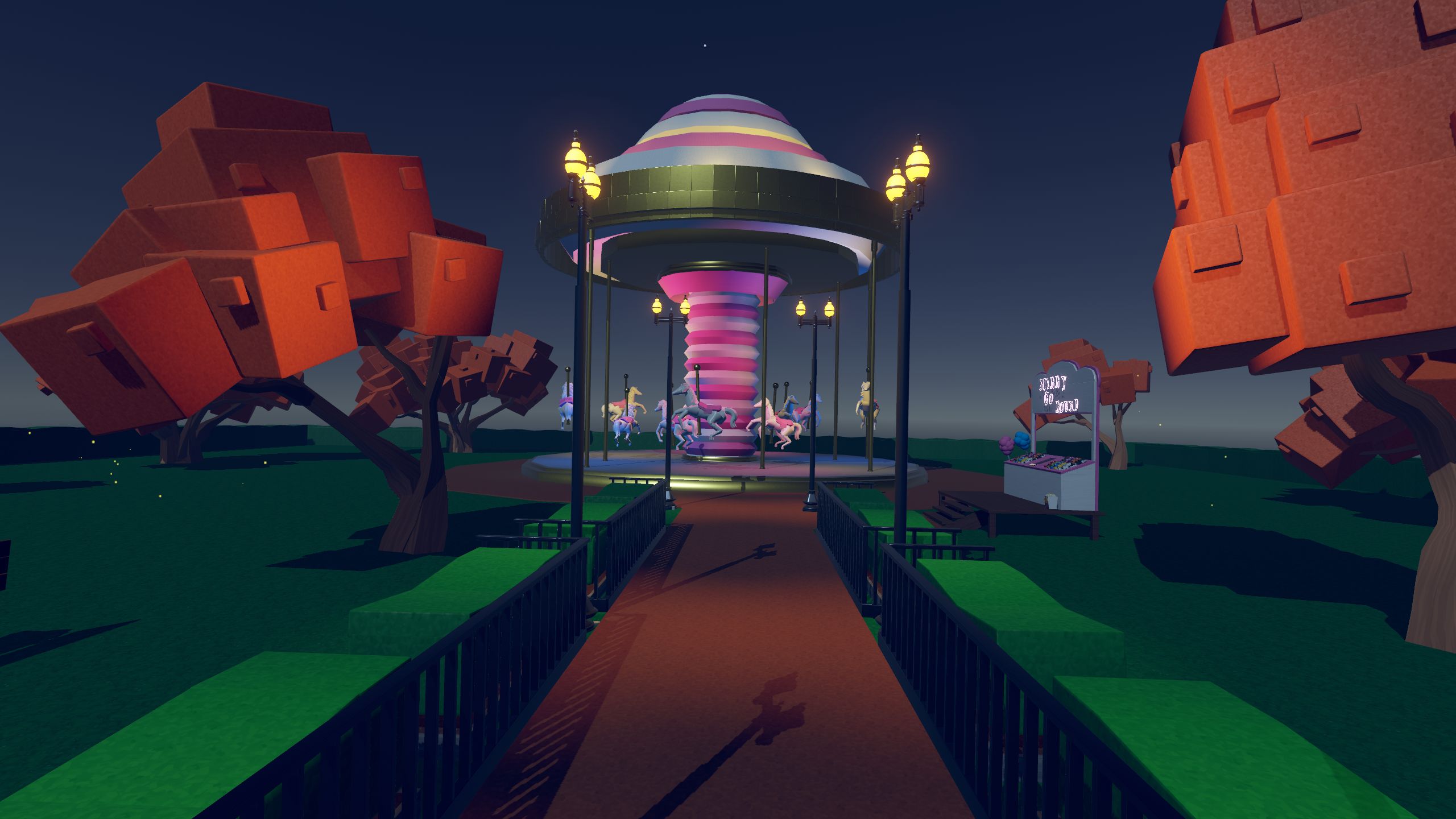 What better way to experience a VR game than to simply hang out with your friends in a fun space? That’s exactly what Carousel Park lets you do. It’s basically a virtual fairground in which you can ride a carousel, hang out with your buddies, and spend some time doing not much at all. The ambience is what sells this one; there isn’t really a traditional game experience attached to it, but it should help you create some unforgettable memories despite that. 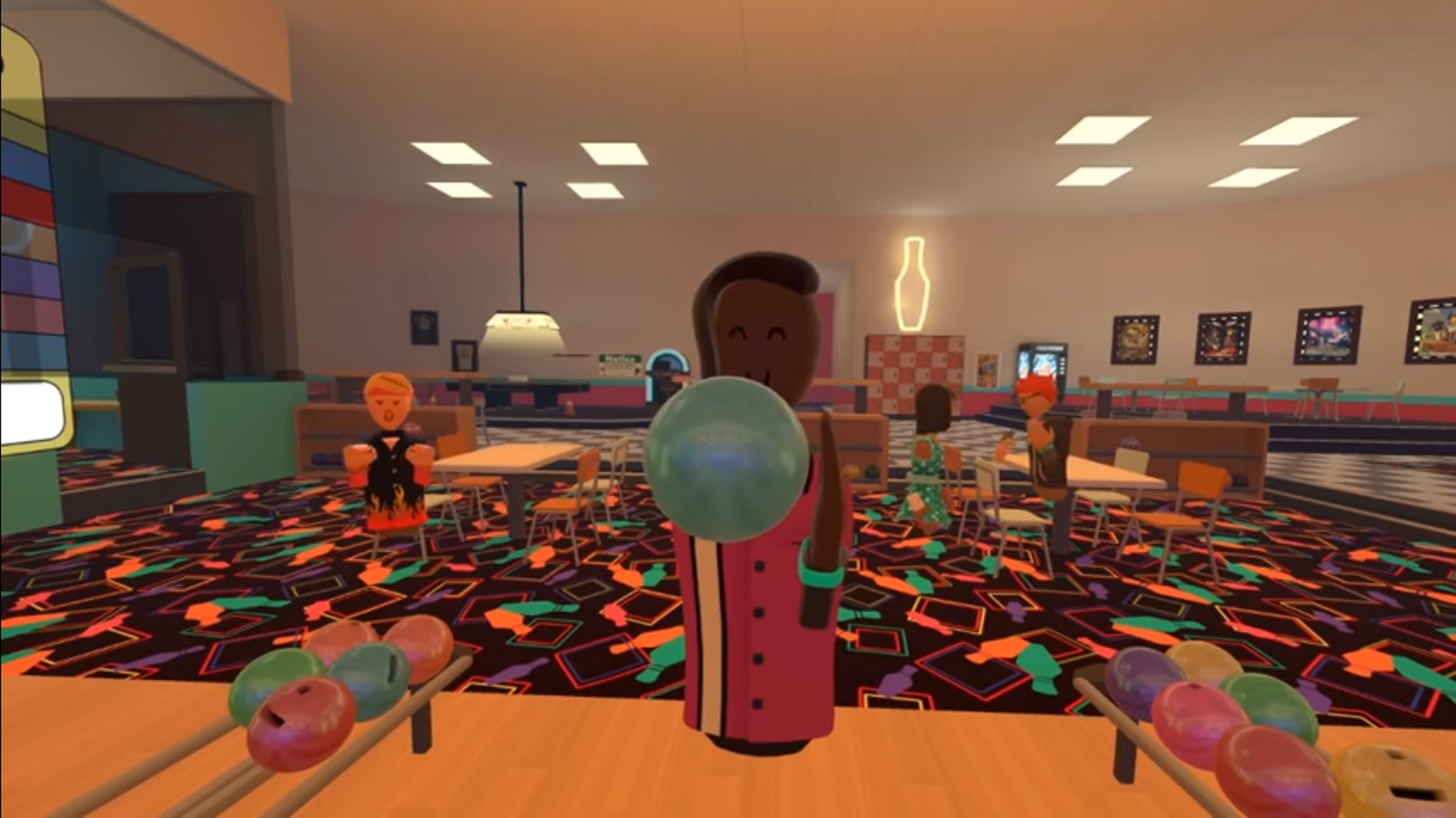 Rec Room’s developers seem to best understand what makes the game special (how about that, huh?), and that’s evidenced by Bowling, which is exactly what it sounds like. You and up to seven friends can enter this room and take it in turns showing off your bowling prowess, or getting a gutterball every single time because you’re as awful at bowling as we are. Either way, this is a great recreation of a classic bowling alley; it’s just missing the squeaky floors.

If you don’t fancy going to a real rock climbing venue or you aren’t able to, then Rec Rock Climbing is definitely the next best thing. This experience tasks you with climbing a sheer cliff face, made all the more daunting and vertiginous in VR; if you’ve got a headset handy, this is definitely one you’ll want to experience while wearing it rather than simply by playing on a PC or a smartphone. Even if you’re not playing in VR, though, this is still an incredibly fun Rec Room game. 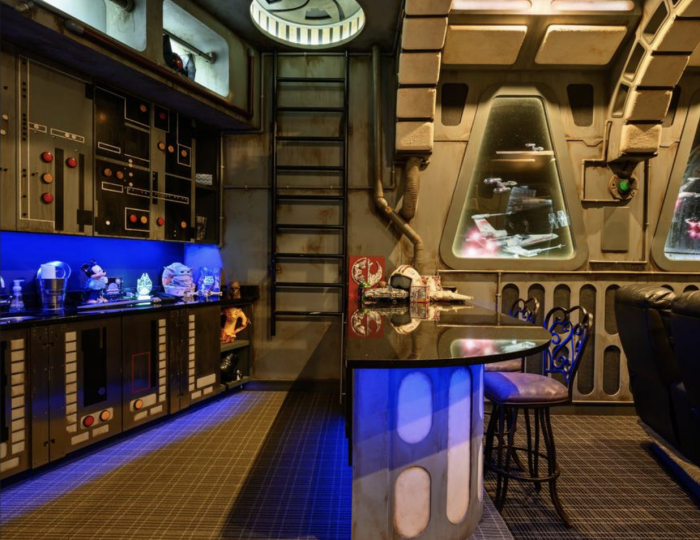 Who hasn’t wanted to explore the corridors of Han Solo’s smuggler ship in Star Wars? If you’ve ever watched those movies and found yourself wishing you could wander amongst the bleeping buttons and creaking metal of the Millennium Falcon, then this Rec Room Star Wars experience is very much for you. This is a faithful recreation of Han’s ship, all the way down to the iconic cockpit, so make sure to bring some friends with you for the ultimate Star Wars roleplaying opportunity! 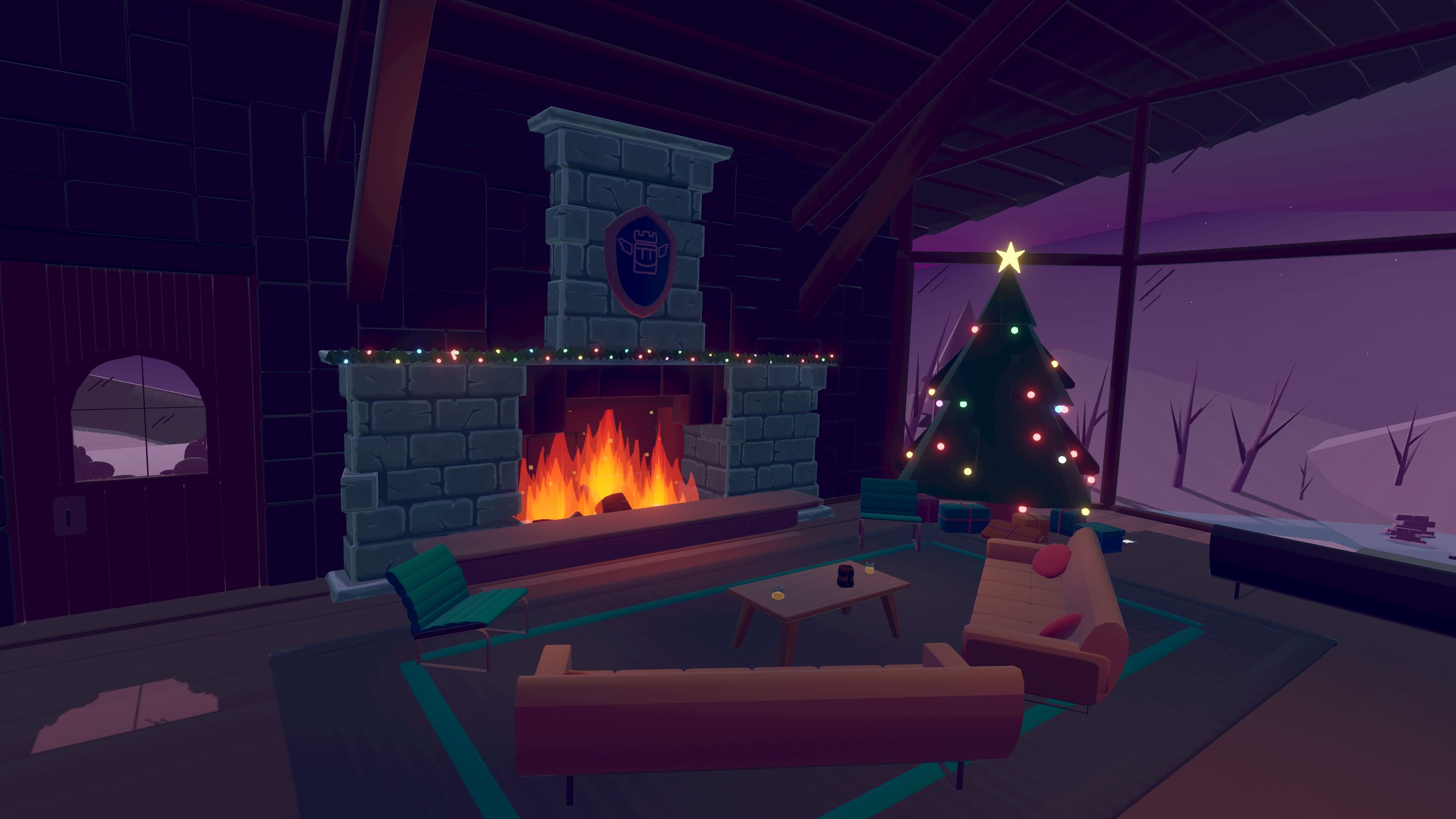 Again, we might be stretching the definition of the word “game” a little with this one, but Taco Winter Lodge is a wintry wonderland that serves as a great escape from Rec Room’s more hectic experiences. If you’re not really much of a summer person and you prefer the feel of hanging out in a ski lodge overlooking some snowy slopes, then Taco Winter Lodge is absolutely for you. Grab some friends, make yourself some hot chocolate, and enjoy everything Taco Winter Lodge has to offer!

On the other end of the spectrum to Taco Winter Lodge, we have Red Dead Redemption 2 Armadillo PvP, which is exactly what it sounds like; a recreation of the Armadillo area from Red Dead 2, complete with many players duking it out for supremacy. This is not a game to check out if you don’t want constant conflict. The clue’s in the name, and players will always be trying to kill you as soon as you spawn in, so you’d better grab a weapon and learn to fend for yourself in the uncaring, lawless frontier of the Wild West. Happily, there are plenty of weapon pickups and hiding spots to help you do just that.

It’s been a long, hard road for Scorn. The interactive flesh nightmare has been in production in one way or another since 2013, when...
Read more
Other Gaming

How to host a games night for you and your friends

Games nights can be one of the most fun ways to spend time with your friends. They can be a great way for people...
Read more
Editor's Picks