The new Xbox Series X is a truly gorgeous console. It’s a huge beast of a machine, boasting a monolith-style design that shows off the power underneath the hood. When you’re buying peripherals, you want ones that will complement the visual style of your console, but you don’t want to break the bank. After all, you’ve probably just dropped a significant chunk of your savings on the console, so the last thing you want is to drain the rest of your money by buying super-expensive headsets and other peripherals. Luckily, that’s where Gioteck steps in; the company’s range of inexpensive yet high-quality peripherals picks up the slack where bigger companies fail.

Gioteck’s TX-50 is a premium-feeling headset in a budget package. It won’t cost you the earth, but it will sit pretty alongside your Xbox Series X or Series S (or, indeed, your Xbox One if you’re still sticking with last-gen machines) and provide high-quality audio if you’re not playing through TV speakers. The question is whether you should opt for something like this over a higher-end option; after all, a higher-end piece of equipment might last longer than a budget one in theory. The TX-50 needs, therefore, to operate like a high-end headset if it’s going to keep the vast majority of its customer base happy. Can it succeed in doing so?

The TX-50 boasts pretty darn solid sound quality. During our time with the headset, we tested it out with a variety of different genres of music, as well as gaming with it for extended periods. It’s a bright, breezy kind of sound, with plenty of treble to accentuate things like gunshots and sharp noises in games but without sacrificing low-end in the form of rumbling bass. As tends to be the case with headsets at this price point, you might notice the mids are a little dominant, but you can easily fix that if you download a solid EQ program and twiddle the settings a little until you find the one you like. It’s by no means a deal-breaker.

Make no mistake: the TX-50 is a headset designed for gaming. You won’t want to use these as your primary music drivers. While they’ll handle the majority of musical genres just fine – hip-hop, reggae, and drum’n’bass all fared particularly well during our testing – the soundscape here isn’t subtle. Using these to listen to acoustic music like folk or lighter indie won’t fly for extended periods of time, at least when compared to higher-end alternatives. That said, if you only intend to use it for the occasional song or two, you won’t find any problem with the acoustic response. There are just better options out there for an all-rounder.

Luckily, since this is an Xbox Series/Xbox One-style headset, it’s unlikely you’ll be wanting to use it for much music listening. As a gaming headset, for this price, it’s astounding. The performance and response you’ll get from the TX-50 are both tight and controlled; we were able to hear everything that was going on during matches of Call of Duty: Warzone and Overwatch, our team chat blending perfectly with the game audio. We’re struggling to find anything to complain about in terms of audio quality considering the money (or lack of) you’re paying for the Gioteck TX-50; it’s an excellent headset that’s built for gaming.

Of course, one of the most important things about any gaming headset is whether or not it fits on your head. The TX-50 is quite a chunky headset, so if you like minimalist hardware that doesn’t announce itself while it’s sitting on your head, you might want to look elsewhere. However, for those who don’t mind a larger form factor to their headset, the TX-50 offers pretty superior comfort, especially in terms of value for money. We were able to play with it sitting on our heads for a few hours, and after a while, we simply stopped noticing it was there (although, of course, it won’t replace a pair of earbuds if discretion is the ultimate watchword for you).

The ear cushions on the Gioteck TX-50 are made of Alcantara, which is a synthetic material designed to work as a substitute for leather or vinyl in the automotive industry. Since its inception, tech companies have been looking into Alcantara for its malleable and versatile nature, which is why you’re seeing it on these ear cushions. Alcantara gives a premium feel without carrying a premium price, and if ethical concerns are high up on your list, then the Alcantara leather will give you a feeling of genuine leather without needing to feel concerned about its origin. They’re supremely comfortable, too; we never noticed any discomfort or pain while using the TX-50.

The headband, too, is pretty robust. You might need to adjust it a little before you find the perfect fit for you, but there are a couple of us with different head shapes and we managed to find a way to wear it without too much adjustment required. The headband is padded, so the TX-50 is actually quite a low-profile device, even though it has the chunky look of a higher-end esports headset. We never experienced any problems finding a comfortable fit, getting the attached boom mic into a spot we felt comfortable using it in, or needing to adjust the TX-50 for any reason, which is pretty impressive. 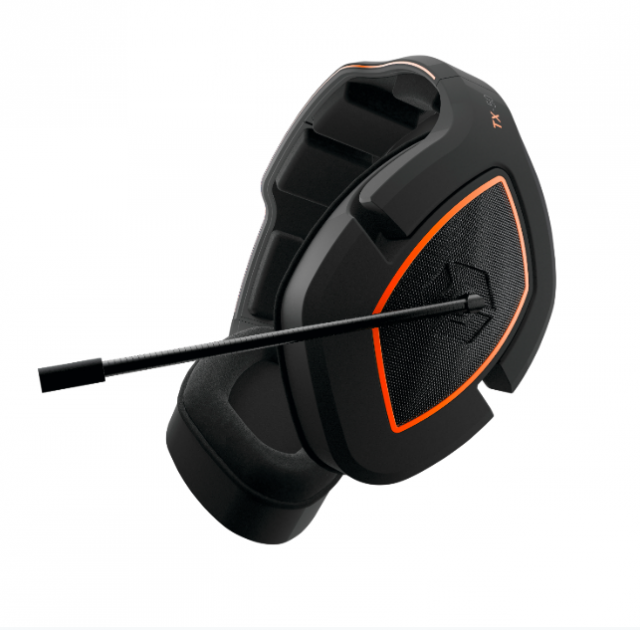 This version of the TX-50 sports the Xbox Series X and Xbox One’s colour schemes. It’s got a matte black and green finish, making it a low-profile, sleek-looking headset that would also work great on PC. These are redesigned versions of the standard TX-50 headset, so if you like the look of the colour scheme but don’t have an Xbox or don’t want to use it with your console, it’ll also be compatible with mobile devices and with your PC. This makes it ideal if you’re looking for an all-purpose headset, too; many Xbox users also have PCs or mobile devices they like to game on, so if that’s you, then you could do a lot worse than the TX-50.

This is a headset that’s been designed to allow you to adjust it on the fly during particularly intense gaming sessions. The microphone isn’t flimsy, so it can take a little bit of punishment from being swatted around, but you might want to make sure you don’t throw the TX-50 around too much as it isn’t necessarily built to be hurled at walls in frustration. That said, it’s a remarkably hardy little unit, so the average person shouldn’t find it to be fragile at all. Mic quality was perfectly fine; you won’t find the clarity of a higher-end headset here, but you also won’t have any problems being heard, as you would hope would be the case for a gaming headset like this.

The inline volume control is situated on the cable itself rather than on the headset, so if you’re hoping to move the volume and mute the mic while you’re playing, make sure you have it to hand. If we have a minor complaint, it would be this: we’d like to be able to adjust volume and mute the microphone from the headset itself, as this is more easily within reach for most gamers when playing. However, at this price point, it’s hard to complain about things being slightly less convenient than they otherwise could be. The inline remote works fine, although it is quite sensitive, so be sure not to crank the volume too loud while you’re gaming.

We’re in love with the Gioteck TX-50. This is a premium-quality gaming headset that just happens to live in budget housing. It doesn’t feel low-quality in the slightest, despite its rock-bottom price point; we bet you could put this alongside some higher-end headsets and many gaming aficionados wouldn’t be able to tell the difference. It’s a touch too bright for music and the inline remote is a little annoying, but those are minor gripes for a headset that’s designed primarily for extended gaming sessions. If you’ve just got yourself an Xbox Series X or Series S console and you’re looking for a headset companion that will last the test of time and provide a high-quality accompaniment to your gaming sessions, then we don’t think you need to look any further than the Gioteck TX-50.

Official site page: Gioteck TX-50.
Thanks for supply of the gear: Virtual Comms.

What are the Most Popular Sports to Bet on?

How To Become A Video Game Writer

All You Need to Know about Live Online Casino Table Games

The Sega CD is an oft-overlooked little marvel of a machine. You might know it better as the Mega-CD, since that was the name...
Read more
Best Games

Top 7 Relaxing Games to Get You Through 2022

The past two years have been a real rollercoaster. From lockdowns to remote work and adapting to the new (not so) normal, it’s been...
Read more
Editorials

What Is The Best Web Browser For Gamers?

If there’s one piece of software that’s integral to the gaming experience on PC, it’s your web browser. You might not think that this...
Read more
Best Games

What can be better than having a huge selection of top-class video games at your disposal? Free games are an excellent way for gaming...
Read more
Editor's Picks

The Best Deals For Gamers This Black Friday

Black Friday is a pretty great time to be a gamer. Across the retail world, outlets drop prices, offering insane gamer gear at incredible...
Read more