As a fan and player of the MOBA game Dota 2, I was intrigued when the announcement of Dota Underlords hit the internet in early 2019. Released as an open-beta, the team at Valve has been making consistent improvements to this fun, strategic game over the course of the past (almost) year, prepping for the release of the full version on the 25th of February 2020.

I’ve put about 600 hours on the Underlords clock (yes, I know that means 25 days of my year were just spent playing the game) and I’ll say that it’s been a wonderful, frustrating experience that I’ll continue to enjoy as long as I can.

So let’s start off with the basics and if we’re being basic, you can describe Underlords as just being auto chess but much much cooler. Currently, you have 4 different modes to choose from; Knockout, Standard, Duos and of course, Training. Subsections of the first 3, you also have the option to play either multiplayer or bot, along with ranked or unranked matches. 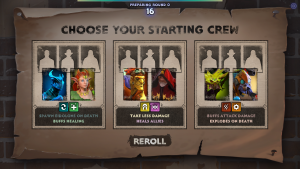 Knockout is the more recent addition and is essentially a compressed version of the game, for the people who enjoy something a bit more fast-paced. The main complaint since the launch of DU was the fact that the standard matches just took far too long for the type of game it is, so in came Knockout. You start out with 5 heroes combined from two guaranteed alliances, at least 1 being level-1, two you know from the beginning and three random heroes.

My strategy usually is to grab the combo I know would more likely have the stronger heroes inside from the very beginning as let’s be real, Dazzle, Warlock and Enchantress will only get you so far. Also, you have to take into consideration that you’re clearly not guaranteed to level up your heroes at the first chance and as you don’t start with a lot of gold in the beginning, you won’t be able to reroll into oblivion to find them. 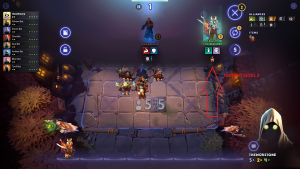 That being said, it’s certainly easier to level your heroes in Knockout. For example, instead of needing 9x of the hero to gain level 3, you will only need 4x which usually comes quite quickly depending on the hero pool. You also have 4 ‘lives’ which means that if you lose 4 consecutive matches, you’re automatically out of the game. I find this adds a bit of pressure and excitement with any loss being critical, considering it could put you one step closer to getting knocked out.

Let me share a scenario, you’re all the way down to 1 life left with 4 heroes one away from reaching level 3, nothing is coming, even though you’ve rerolled a bajillion times. Thus the dilemma ensues, do you risk the possibility of getting knocked out in the next match or do you sell off some of your waiting heroes to reroll in hopes you can make at least a couple stronger? Any choice is a gamble and you only find out whether it’ll pay off or not when the match starts.

If I’m not in the mood for a longer game, I will usually opt to play Knockout for a bit of fun without the time commitment. That brings us to Duos. I personally love playing with my partner and of course, anything is better with a friend. Duos mode also offers even deeper layers of strategy. 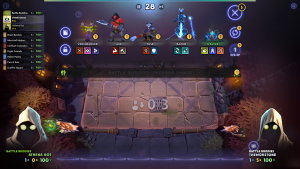 To highlight the main and most important differences of this mode, EVERYTHING is shared. Your HP, your heroes, your XP, and economy. This has its upsides and downsides, considering both persons of the team will be fighting ‘separate’ matches so if one loses and the other wins, the effect on your HP will be low, though if both lose, you can see a huge chunk of your HP disappearing. If you both have sucky armies compared to everyone else, prepare to leave the game in only a few rounds.

It’s really important to create a strategy and always ensure that at least one member of the team is strong as if even one will be weak, the other still might be able to carry, for a while. Check regularly on the other team’s combinations and if you play enough, you’ll start to get the pattern of who you might play next, adjusting your team accordingly in an attempt to counteract them. For me, especially in the late game, you’ll pretty much know who you’ll play next and if by chance you’re up against a mainly assassin build, protect your heroes by putting them closer to the board edge, if you have a Target Buddy, put it in the back section where they’ll jump to. Next game, move your heroes back to whatever position puts you in the best possible chance for success.

I could talk more but honestly, it would make this article far too long and if you’re even still reading by this point, I commend you immensely. We’ll skip the training mode as this really doesn’t need an explanation, it’s there to help you learn the mechanics of the game and obviously understand how to play. 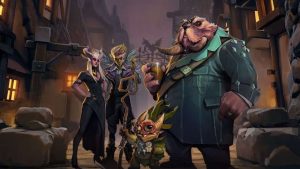 The current hero pool is pretty awesome and with 4 different ‘Underlords’ to choose from, you can really boost your build from killer combinations. Explaining the Underlords, with the recent update you have 4 characters I would call basically the glue to your team. The two original Underlords are Anessix and Hobgen, with Jull and Enno as the latest additions. Each Underlord has its own unique set of abilities that are on a rotation so it’s never guaranteed which ability you’ll get. This adds its own challenge as you may find nothing really matches your build. 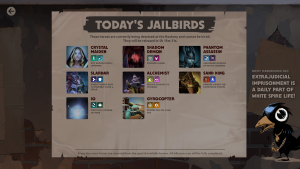 I personally really enjoyed the ‘Jail’ update that has since been removed as due to the huge amount of heroes the game offered, they put a number of random heroes in a ‘Jail’ which would reset the following day. Now, they’re working on a season rotation which I find has dulled the game immensely as the same hero pool and builds get overused, for an entire season. If you’re reading this Valve, bring Jail back!

Overall, the game is extremely fun, challenging, and absolutely infuriating at times especially when you don’t get how on earth the other team or player has level three heroes at round 5. I must commend Valve on their hard work though as considering I played from launch day until now, the improvements have been massive. I cannot wait for the full version to see what changes they’ll implement and how the gameplay will differ.

If you like strategy games and want something that’ll require a bit of brainpower, it’s a great use of your time. Eat at your desk and play a round of Knockout, as I often do.