Doppelganger- Castlevania: Symphony of The Night

Doppelgangers are a common enemy in video games. It only makes sense- it is always fascinating and difficult to face what is essentially yourself. However, the Castlevania series to me has always been what first comes to mind when considering this sort of foe. In particular, today I’m looking at the Doppelganger from Symphony of the Night.

To understand this fight, first we must look at our character, Alucard. The story of this game is that for whatever reason, the current Belmont vampire hunter, who defeated Dracula previously, has not shown up to face him again when the vampire’s castle reappeared. As such, Alucard, Dracula’s own son, has gone in his place to find out why the castle has reappeared, and put an end to whatever evil is afoot.

The game makes a very good show of Alucard’s capabilities; he may not have the whip the Belmonts use, but his sword certainly seems to get the job done, trading range for speed. He can also do a backdash, allowing him to move back out of danger quickly, and carries a shield to protect him. When used, he’ll hold it, and the shield will deflect projectiles.

A quick check of his equipment shows that he is more than ready for anything the castle can throw at him. His unique Alucard equipment is absurdly powerful, meaning despite him being only at level 1, as you’d expect, pretty much nothing can stop him. The shield in particular increases his defense by 5, reducing damage immensely, and reduces the damage from all attacks. His sword is exceptionally powerful, able to cut down all enemies you run into with one blow. 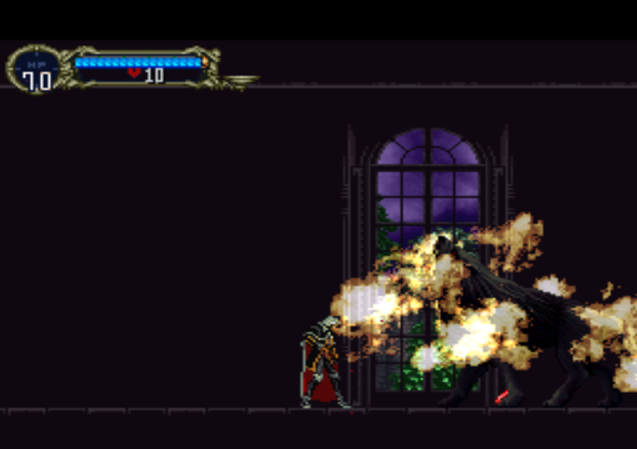 His armor increases his defense by 20 and resists fire, ice, and lightning attacks, making them do even less damage. His Dragon Helm gives him +4 strength and +3 defense, and it halves the defense of all enemies, meaning they take even more damage. His Twlight Cloak gives him 10 more constitution- this is basically a background defense stat where every 10 points in it gives you one more defense, regardless of armor. Lastly, Alucard has the Necklace of J, which increases his defense once again by 5.

In short, enemies have less defense, he has absurdly high defense, and he can cut through just about anything, even if he is only at level 1, meaning he can only get even stronger from there. Or… he would, but shortly after entering the castle, he ran into Death, Dracula’s right hand man. Death says that, out of respect for Alucard and his father, he will not ask Alucard to join him in his evil goals, but he will insist that Alucard stop attacking the castle. Basically he doesn’t want to harm Alucard out of familial respect. 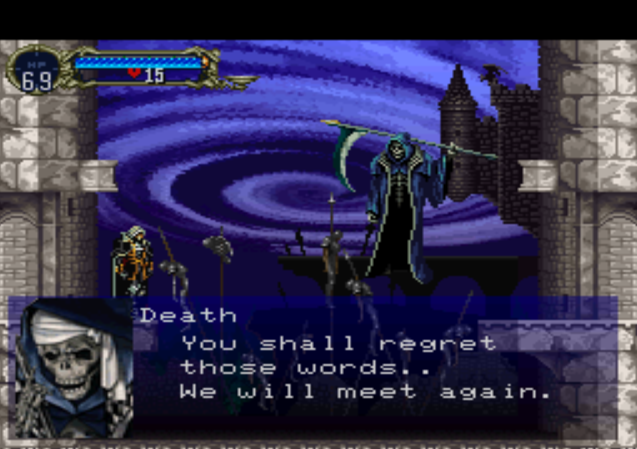 However, Alucard insists on continuing, so Death says they will met again and flies off- after steal all of Alucard’s equipment. As you might imagine, this removes every bit of power you just had. Enemies will do their full damage now, their defense is back to normal, and you only have your fists to work with. Luckily, your first enemy will be holding a short sword, so that helps, and you’re very likely to pick up replacement items as you go, but obviously it will be a very long time until you can find anything comparable to the Alucard equipment.

Anyway, now that this is all established, let’s move on to our boss. Alucard runs into a large room with what appears to be a door in the middle. The door opens to show a shining light, perhaps a mirror, and a copy of Alucard appears out of it, immediately attacking. This copy has no equipment except the short sword you’ll have after running into Death, but since it is unlikely you’ll have found something better in the meantime, you’re basically the same in that regard. He also has a Knife sub-weapon, letting him tosses knives at you for a distance attack. 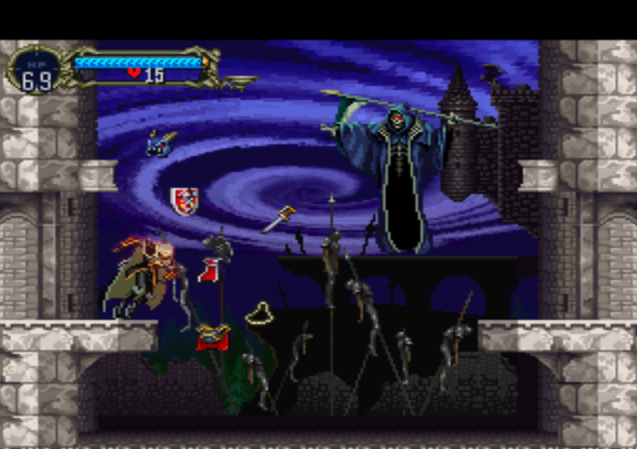 Since he has no defense at all, your attacks will likely do more damage than his(twice as much in my case), but he will, unless you’re rather overleveled, have much more health than you, which evens it out. Unlike him, you can come into battle with a different sub-weapon and switch your weapons, so you have a bit of variety in facing this boss. However, I would suggest using your short sword or equivalent with one exception- another weapon you assuredly will pick up is Red Rust, a two-handed sword that actually reduces your attack by 2.

This means it weakens you and stops you from using a shield, and on top of that it occasionally jams due to rust, meaning Alucard can’t attack with it some of the time, and when he does it is rather slow. However, when it does hit an enemy, it can inflict the Curse status, stopping any susceptible enemy from performing normal attacks. This means the Doppelganger, if hit, will only have the Knife to work with, and it will be the only time Red Rust will be useful, since only it can be afflicted with the Curse effect.

That particular strategy aside, the boss also lacks a shield, meaning instead of blocking projectiles, he will duck to dodge them most of the time. You can use this to your advantage to try and get in closer. While he normally avoid most tricks thrown at him, much like you, he cannot avoid an attack while he’s reacting from something else, or attacking himself.

Because of that, the Knife is a good weapon to use. I would decidedly not recommend most of the other subweapons, as they are easily avoided. In particular, the size of the room makes it easy for the Rebound Stone to miss as it bounces from floor to ceiling, and the Holy Water, while you can use it to trap the boss as it lands or something, is ultimately better on more stationary targets.

The Bible may be viable, as it spins around Alucard and makes him impossible to approach, but I think the Doppelganger would likely retreat and fire knives if you try it. Ultimately the idea I outlined above would likely be best, though there is one weapon that can end the fight very quickly- the Stopwatch. It basically sacrifices 20 hearts to freeze time for a short duration. If you do, he will be entirely open to attack and can be hacked at repeatedly, either doing a lot of damage or killing him outright.

Aside from sub-weapons, since you have a shield and he does not, you can close in while he throws them. While he likes to use jumping attacks, he is easy to hit while he is jumping as well. I should note that despite his lack of equipment, he does have an ability you won’t have- namely, the power to transform into a bat. He will do so if you ever manage to back him into a corner of the room, and fly at you very quickly. Ducking or jumping will save you, but he’ll have moved to the other side of the screen. 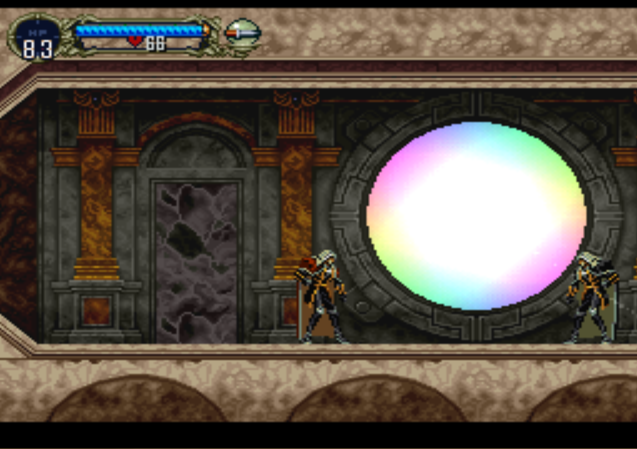 In any case, that’s the Doppelganger. A foe that mimics your abilities, but not necessarily your intelligence, given the many ways you can take him out. I hope you enjoyed, everyone, and I’ll see you next time.