Generally, when a game is remade in some way, it is an attempt to not only update the game and bring it to more modern standards, but also to improve on it by adding what has been learned since its making. For instance, Metroid: Zero Mission is a remake of the original Metroid and I would wholeheartedly say it is an outstanding improvement in every way, primarily because unlike the original, wherein I could easily get lost, health was hard to come by, and the password system made continuing a pain, simply updating the game with features like maps and save rooms made the game infinitely better, not to mention the other additions. However, today’s topic is a little more ambiguous. 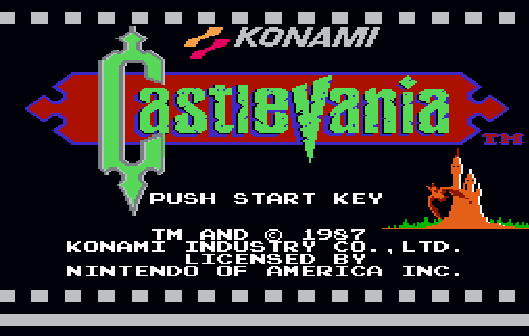 Today I will be comparing the original Castlevania to its remake, Super Castlevania IV. They both use many of the same concepts, naturally, so I’ll cover what they have in common first. Both of them follow Simon Belmont in his heroic attempts to infiltrate Dracula’s castle, face his dark creatures, and slay the vampire lord before he can cause havoc across Transylvania. The gameplay is basically the same- progress forward, use your whip and sub-weapons to attack, with hearts for the subweapons, money for points, and upgrades for your whip being found in candles.

Where they mainly differ is in execution of that. While the basics are the same, the enemies and layout of the levels differ greatly. For instance, while both start with Simon outside the castle and heading in, the original simply had a row of torches with whip powerups and hearts for you before heading inside, while Super Castlevania IV has a small stage taking place outside, complete with a wall with doors for Simon to move behind the wall to get past large gaps and so on. Already it is throwing in a new idea, that of there being a sense of depth in the 2D level.

In addition, while you do eventually get into a clearly indoor area, there are still quite a few signs of vegetation and open areas where the moon shines in. It doesn’t feel like you’re quite inside the castle yet- fitting for the first level. The second level seems to take place in a swamp and later a river under or beside the castle, suggesting Simon isn’t just traveling in a straight line, but rather trying to find an alternate, less obvious path in. 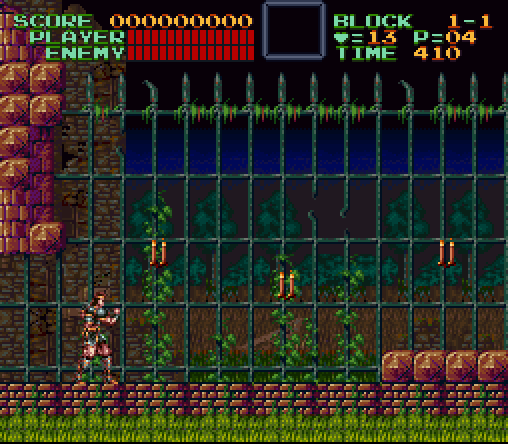 In contrast, the original simply shows the outside of the castle as you enter, but the rest is clearly indoors, though one part forces you to take stairs down a floor where mermen pounce out of the water to attack in droves, possibly some sort of sewage area, but the graphics are not clear on this. That may be the reason for the change- the better graphics the Super Nintendo can show lead the designers to stray away from simple castle walls and into more unique and extravagant environments and effects rather than stick to what was previously shown.

In fact, in that sense you could argue it isn’t so much a remake as a new game entirely- the level layout, appearance, and even the boss battles are all different. The first battle in the original Castlevania is against the Phantom Bat, a large bat that swoops down on the player and is best fought off by axes, while in Super Castlevania IV Simon faces Rowdain, a skeletal horseback rider with a lance. The two are not even similar in execution; the bat will swoop down from above, while the skeleton faces Simon head on and his horse spits fireballs.

However, a reason for the change in bosses may be that the controls for Simon have also changed. In the original game, Simon can only whip forward. The upgrades do help make the whip itself longer and more powerful, but there are still clear limits on what he can do. The best he could do to hit the Phantom Bat would be the throw the Axe at an arc to hit it, jump up to try and hit it, or wait for it to come down to him.

In the remake, he can whip forward, up, down when he is jumping, and diagonally. This means an enemy like the Phantom Bat would be much easier, he can strike upwards and at angles where it will be, rather than waiting for the very few chances there are to strike or relying on a sub-weapon. Thus, it makes sense that the bat was not reused for the remake, as it wouldn’t be a proper enemy.

Rowdain, on the other hand, is because it faces Simon directly- his new fancy whipping prowess will not do him any favors. In addition, the boss is also more complicated- once his health is down to half, his horse will die and he will start using jumping attacks. Now upwards and diagonal attacks come in handy as you have to adjust to a much closer and more mobile enemy, moving much quicker than the Phantom Bat ever did. He even appears to die on the second to last hit before reforming in an attempt to catch the player off-guard.

The radical shift in the levels also stems from this change in ability- If the player can hit enemies and objects at different angles, then they do not need to be lined up and appear as they did before, so it is changed to add more variety, challenge, and to give the new abilities use. New abilities demand a change in design, and new designs generally require a change in ability.

In turn, it must be said that the original is harder than the remake by virtue of this. If you cannot whip in multiple directions, it means you can only hit what is in front of you, and thus for other situations your sub-weapon becomes especially crucial. Take the Phantom Bat example from before- while it is possible to hit it in other ways, such as stroking just as it swoops down, generally the best way to hit it consistently is to use the Axe when it is hovering. Hope you grabbed it before the fight.

Indeed, much of the game follows a similar pattern where certain sub-weapons are much better for particular situations. In fact, the developers explicitly put inconvenient weapons in candles on occasion to try and mess with players- you have whatever it is you need, but since you ran over and hit the torch, now you’re stuck with the Knife instead, making things much more difficult. There are also points where dangerous enemies and situations appear that, while you could get through them the first time, are considerably easier after a good bit of planning. For example, a series of platforms where you get attacked by a swarm of Medusa Heads, infinitely respawning flying enemies that come out of the opposite side of the screen.

Getting through without being hit, and thus knocked to your death, can be very difficult and a matter of strict and precise attacks to stop them and jumps to progress. Accordingly, it’s very possible you may die quite often- but through perseverance and learning, you can make it through as you figure out what exactly needs to be done to get through. The remake does not have this as much, primarily because due to your capabilities, your actions cannot be controlled as strictly.

Instead, they add challenges that rely on the new mechanics, such as the swing hoops. These are bat-like floating circles that Simon can latch onto with his whip to swing across large pits to reach the other side, adding a new form of perilous platforming to deal with. The up and down buttons can be used to lengthen or shorten the whip when using these ‘swing hoops’ to make sure you actually can reach the platforms. 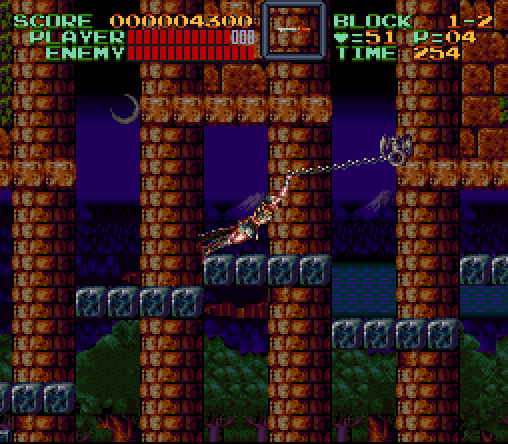 One could argue these are less challenging in general, but I certainly cannot deny that failing to use them properly has cost me a few lives. While your capabilities do reduce the difficulty in some ways, in others the game is just as challenging its predecessor. So, taking all this into account, that does raise a question- which is better to play?

I honestly do prefer Super Castlevania IV in this case. The visually impressive backgrounds give a better sense of where you are, the controls give more of a sense of control and power over your situation, which is always fun, and ultimately, I just find it more entertaining as a whole. However, this does not discount the original entirely. It is legitimately a harder game, and while it lacks the fancier aspects of its remake, it still has solid controls and mechanics, and requires smarter play such as strategic use of sub-weapons.

In short, I prefer the remake because it is a bit easier, more visually impressive, and I find it more fun. However, the original is more of a challenge for your average player, and I would recommend it over its remake if that is what you are looking for.