Today I’m looking at a boss from The Legend of Zelda: Phantom Hourglass, Dongorongo. The game is a direct sequel to Wind Waker and carries many of the same concepts, like traveling from island to island by boat. Personally, I believe it does that a little better than the original, because while the ocean of this game is smaller, that actually works in its favor. Smaller waters means that everything is less spaced out, and thus you don’t have to go far before you find something interesting or get attacked by something.

Another side effect of the smaller game is that none of the islands you run into are small themselves, at least in terms of importance. There are no entirely superfluous locations, which means every time you run into a new place, it really is something to get excited about. In the case of Goron Island, as you might expect from having a boss on it, it had an entire dungeon.

When you arrive on the island, as the name implies, it is populated by Gorons. The map indicates there is a large structure on the northwest tip of the island, but there is no way to get there at first- there is a Goron blocking the way who refuses to let anyone but other Gorons to pass. Thus, you have to go see the Goron chief, who will let you take a test to become one of them. I had expected some sort of physical trial, but to my surprise, it was actually a test of memory.

He asked several questions, all pertaining to some feature of the island and its inhabitants, like how many Goron children there are, or what color those monsters on the ledge were. It costs 20 Rupees to take the test, but you earn Rupees for every correct question- though he will take it all back when you get one wrong. Even more baffling, he also takes all that money back when you past the test, as a sort of ‘fee’. Still, he was as good as his word, and you’re now an honorary Goron. Everyone will refer to you as “Goro-Link”(or whatever you named your file) and the guard will let you pass.

However, the chief’s son, Gongoron, is not very happy about this turn of events, and runs off, forcing you to look for him. This eventually leads you straight to the large building at the top of the island, the Goron Temple. This brings a new element of worry and curiosity into the typical dungeon exploring of Zelda- where did this kid go? Is he safe? 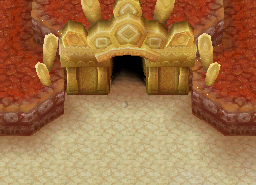 The dungeon itself gives you plenty of reason to think he may not be, as it is filled with dangerous enemies. The first thing you’ll run into are Beamos statues, which will fire a laser at you if they spot you, and can be turned off by Bombs, but only for a short time. The best idea is to sneak by while they aren’t looking.

More alarming are the Armos statues, which chase you constantly once you get close to them. If you hit them with a Bomb that will turn them off for good, thankfully, and if you find one, you know there is a switch puzzle to do, because now you can push the statue around to press whatever switches are around.

Obviously Bombs are crucial for this dungeon, but thankfully there are replenishing containers on all floors of the dungeon that contain specific items. For instance, one on the first floor will always have 3 Bombs, which changes them from a precious commodity to something you can use whenever needed. The dungeon also has a lot of quicksand, which will instantly devour Link should he step in it, costing you half a heart when he reappears.

In any case, shortly after you arrive on the first basement floor, you will find Gongoron again- but the two of you are separated by quicksand. Gongoron apologizes for how childishly he acted before, and regrets leading you into the temple, since now you’re both in danger. He warns you of a trap activating, and is naturally in awe of you slaying the monsters that appeared- specifically a Hinox, a giant that throws bombs but can be stunned by arrows.

Anyway, since both of you are stuck now- him unable to leave his area and your character unable to progress, he says your lives are linked, and thus you can switch control between Gongoron and Link. Be warned though- they share the same health bar. What hurts one will hurt the other.

In any case, there’s nothing Link can do at this point, so Gongoron has to get them out of this particular mess. The young Goron normally walks about as fast as Link does, but he rolls into a ball instead of running, and essentially becomes a living boulder. This means he can move much faster than Link and knock enemies aside- though none of the enemies he faces will be harmed by it due to their own rocky exteriors. If you run into a wall, it will stun him for a short time.

In order to actually attack, you must click on an enemy while he is rolling, causing him to pounce on the enemy while rolled up. In this first puzzle he is up against several Rock ChuChus- a variation of the common ChuChu enemies who are immune to normal attacks, and need the have their rock helmets removed with Bombs. Gongoron’s jumping attack is perfectly capable of smashing these helmets with ease, and can finish them off with just rolling, along with any normal rocks.

In any case, once the Rock Chuchus are done in, Link can move on, and the two can finish the floor’s puzzles together. After that Gongoron finds a hole he can enter and you can’t, and says he will use it to go on, leaving you alone again. Well, it was fun while it lasted. Luckily, you soon find another mechanic to liven things up- a new item. 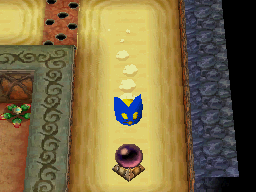 Bombchus replace normal Bombs for this dungeon as soon as you find them in terms of usability- you’ll still need Bombs for the enemies I’ve already mentioned, but Bombchus are for puzzles. When you use one, the rest of the game freezes while you open your map. Then you plot a course for your little explosive mouse to take. They can also enter those small holes like Gongoron went into and across quicksand thanks to their tiny size, hitting things that are otherwise impossible. My personal favorite were two particular switches that have to be hit across a vast floor of quicksand while also avoiding Eye Slugs(easily killed enemies) that would be in the way to hit the switch.

In any case, eventually you make your way to the boss room. There, you met up with Gongoron again- and the boss makes itself known. “Dongorongo- Armored Lizard” looks visually similar to other Dodongo from previous Zelda games, but the way you face him is very different. Unlike them, Dongorongo is facing Gongoron instead of Link, who is trapped behind a pit of quicksand. 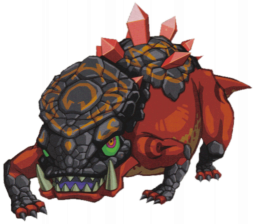 Accordingly, you must use Gongoron to roll around the arena, avoiding fireballs the boss shoots and destroying any Eye Slugs that start to go after Link. Link can destroy them if they get close, but taking time to do that could leave Gongoron open to attack. After a while, the boss will charge right at Gongoron, at which point you must trick it into ramming a wall. When it does, it will be stunned. Now, you must tap it repeatedly to have the Goron slam into it five times, forcing its mouth open. Now you must switch to Link to send a Bombchu straight into the boss’ open mouth. 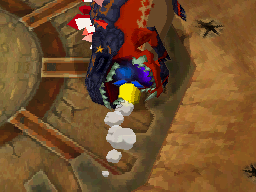 After eating three Bombchus, the monster falls over in defeat, and the quicksand vanishes, allowing Link to come closer. Since the door onward to the dungeon’s prize is open, Gongoron heads in on his own- but it quickly closes back as the monster gets up. The quicksand also reappears, cutting off any escape. It just goes to show- in Zelda, a monster is never dead til you actually see it explode.

This also shows remarkable intelligence on the creature’s part- feigning defeat to split up the two, trapping one for later and letting it deal with Link, who no longer has help. In any case, luckily the damage it took does expose a new weak point on the Dongorongo’s back. 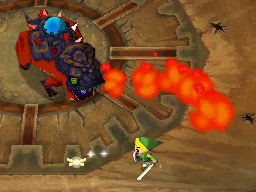 Unfortunately, Link has no way to reach it just yet. The monster will spit fire at you like he did before, but Link’s slower running speed and the increased rate of fire makes it much more dangerous- and it isn’t dumb enough to try charging at you again.

However, it now falls prey to the same thing that did in so many Dodongos in the past- it opens its mouth wider. It may be able to breathe fire normally, but if you let it the boss will inhale air to let out a much more powerful stream of fire at you. But this is also your chance to beat it, since now you can throw Bombs down its throat. This will not actually damage it though- it merely stuns Dongorongo and makes it fall on its side. This lets you wail on its shiny blue weakpoint.

After a while it will get up again, but as you can surmise the same trick will work, and after likely two more times stabbing it in the weak spot, the monster finally goes down for good. Still, compared to past iterations of the species, Dongorongo is much more capable, intelligent, and durable than the typical Dodongo, as the title “Armored Lizard” would imply. While it was stunned by internal explosions, unlike the usual members of its species this didn’t actually kill it, but instead exposed another weak point that was fatal. It added complexity to a type of enemy many veteran Zelda players would assume to be rather simple at this point- as well as adding the complexity of the switching mechanic to the fight. And for that, this boss was certainly memorable.