Today I will be looking at Digimon World 3, one of my favorite JRPGs and indeed one of my favorite games in general. Specifically, I will be explaining the mechanics of the game and how one could get started playing it. So, to begin with, we start the game on a street corner, where a boy, Junior, is waiting for his friends, Teddy and Ivy. 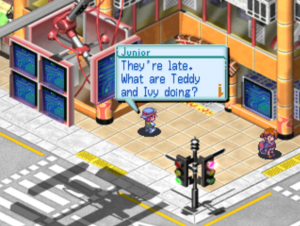 As he waits, he sees a news report from some store TVs that many members of the terrorist group A.o.A. have been captured. The group does play in with the story later, but they aren’t really mentioned for a long while after this, so it’s nothing I need to get into. More immediately important, his friends show up, and they go to the MAGAMI Online Center to play Digimon Online. From what I can gather, it seems to be sort of a virtual reality MMO where you obtain Digimon and battle.

The first choice you get is to make Junior’s username for the game, which basically replaces his real name for the course of the game, and next which group of Digimon he picks out. There are three ‘packs’ of three Digimon to pick from. First is the “Balanced Pack” consisting of Kotemon, a powerful physical attacker, Renamon, an elemental attacker, and Patamon, a healer. This group is of course the most balanced, with elemental strikes, physical blows, and someone to heal everyone involved.

Second is the ‘Powerful Pack’ with Monmon, a physical attacker that learns skills that target particular enemies, Agumon, who uses fire specifically, and Renamon again. As you might expect, this group is primarily attack based. Last is the ‘Maniac Pack’ with Kumamon, who I do not know much about, but he starts out lacking the MP needed to use any special attacks. Next is Guilmon, who is similar to Agumon in many respects, and last is Patamon again. As the game points out, Patamon is the most reliable of the bunch. This group is one I’d pick if I wanted to make the game more challenging.

After your selection, you are taken to Digimon Online and the game proper. A data managing device called a satellite will follow you around once you arrive, basically containing the data for all your items, Digimon, and so forth. You soon meet your Digimon as their data is retrieved from the device, and they follow you from then on. They also talk, though I do not think they get any lines after they are summoned. This made me wonder if they’re only saying scripted phrases, or if they’re actually sentient like in the anime.

Given that other Digimon seem capable of ordinary conversation, I suppose I have to assume they are. In any case, after you leave the facility and come into the game’s first hub area, Asuka City. You’re is met by an old man Genji, who challenges you to a match. Don’t worry- while his Kuwagamon looks intimidating, any of your Digimon can beat him in two hits. This is basically a match to help you familiarize yourself with the controls. Aside from the regular attack, each of your three Digimon has a unique attack that costs MP to use. 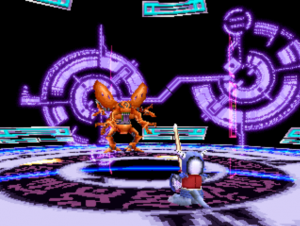 As you fight other enemies, the participating Digimon gains experience and levels. Also, your Digimon will seem to block attacks sometimes. This is not infact blocking, but evading, and thus they do it depending on their stats, rather than any action on your part. I’m just saying that now, because it fooled me for the longest time into thinking if I pressed Square at the right time they would block.

The old man, after your victory, tells you that you can perhaps because the world champ at the game, and says you will have to learn how to battle with Digimon and card battle. The game does have a card game inside it as a sort of minigame, but the game itself explains it well enough, and it isn’t really crucial, so I won’t be covering it.

Aside from that old man, there are no battles in the city, so lets get back to that in a bit. As for the city itself, the first building you’ll see is the Inn, where you can sleep to recover health and MP, for a price. The Asuka City inn is the cheapest, while future ones will steadily cost more. There is also a Guardromon at every inn, and the machine will save your game for you.

Next to the inn is the Smith’s Shop, where all your item needs are fulfilled. There is an item shop for health items and the like, a pawn shop that sells rings with various effects, and the Armory, which sells equipment like weapons and armor. A Digimon can hold two items at once, like a weapon and shield, but it’s usually better to have two weapons instead, I find. Other items can take care of defense, allowing you to use superior offense.

Outside the city proper is a Gym. At the gym, you can spend training points, gained by leveling up, to train your Digimon in certain stats like strength or speed. The boosts can be tremendous, and I cannot state enough that you’ll want to visit a gym often. 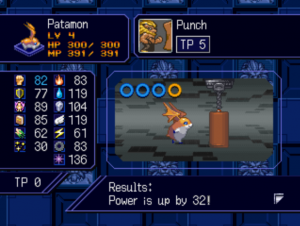 And now that we are out of the city, lets get back to the subject of battles. The park area here is filled with the weakest enemies in the game, but at level 1, they’re still about even with you. If you go up the hill north east of the area, you’ll find stronger versions of the same Digimon, but they give no more experience than the others. Do not go there until you have a couple of levels. In fact, do not leave the park itself until you do. The path to the Wire Forest east of the park is littered with the same enemies, yes, but there is nothing in that path of interest until you get to the actual forest, which contains tougher enemies. And everywhere else does as well, meaning you effectively can’t leave the park without getting destroyed. 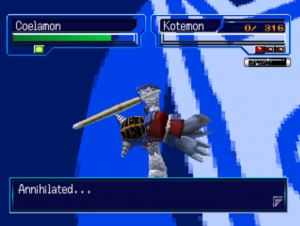 The enemies you can tackle will certainly wear you down quickly as well since they’re of comparable strength, which means making a lot of trips back to the inn to save and recover. One strategy I found that works well is simply to spam your Digimon’s special move instead of fighting normally. It will generally end the fight in one blow, letting you rake in experience and money without harm.

Once your Digimon are all at level 5, I’d say it is safe to start venturing out for certain, particularly because its at that point that your Digimon get their first Digivolution, where they move up to their next form. Their new form won’t be able to use their previous special move, but they make up for it with stat boosts in pretty much every area, so be sure to set them to start in that form instead. In addition, this new form has its own levels separate from the main levels. These levels do not increase stats, but they do get the new form special moves of their own. These will be better than the moves they had previously, though they are technically of a lower caliber- the previous moves were the special move for their previous forms, while the new trick is more generic. Every form does have their own unique move, though, which they generally unlock at level 50 for that form.

Since I went with the Balanced Pack, I can tell you a little more about that. The first move the new Champion forms learn are basically replacements for their previous moves in the Rookie stage, except for Renamon, who learns Thunder Bolt as her new form Kyubimon instead of an ice move like she had before. However, as promised she learns an ice move later too, so that gives her double elemental coverage.

And of course they learn more stuff as well, such as Patamon, now Angemon, learning Small Heal. This move is an incredible blessing; it not only heals your team, but can be used outside of battle freely. Eventually they even get the ability to ‘load’ certain techniques. This means if they are in another form, they can still use the loaded move. Another thing they learn in time is more Digivolutions. Every character has a large branching path of Digivolutions, one leading into another, with their own unique stat changes and techniques. 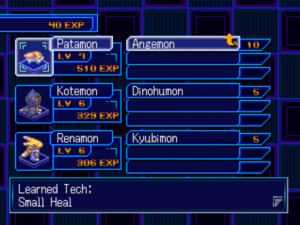 But for this beginning bit of the game, you’ll be using their main transformation quite a bit. Speaking of that, I have two more mechanics to divulge. First is Blast Digivolution. Under your Digimon’s health in battle is a black bar which fills up a little more with static after every hit. The more damage they take, the more it fills up. If it fills up entirely, they instantly transform into their next stage for the duration of the battle. So if they’re in their Champion form, they will move up to their next natural Ultimate form, and are able to use that form’s big super move.

Agumon works a little differently in particular- rather than Blast Digivolving into MetalGreymon, his natural form, he will instead become SkullGreymon, an undead version. I think this is a nod to the same event happening in the anime, and in the game it also hints to how you can unlock Skullgreymon if you train Agumon’s darkness tolerance stat.

Anyway, aside from getting hurt, you can also increase the gauge by using the item DV Plug, but during so takes up a turn. They will not transform from that alone either, they must be hit to set it off. This does make sense, since it is basically a desperate and temporary change to survive.

I believe the last thing I need to talk about for combat is DNA Digivolution. A good example of this appears in the Balanced Pack once everyone is at Champion level. You can switch Digimon out in battle, but if two of them can DNA Digivolve, there will be a red dot by the one your current one can do it with. If you choose to do it, the two Digimon will fuse together, forming a stronger one that unleashes a powerful attack on the enemy, before they change back. 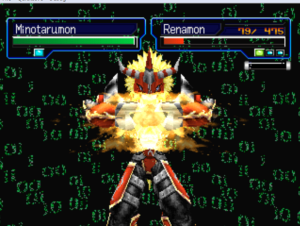 This also switches them as normal, making it a great way to tag out a weaker Digimon and weaken their foe for the one going in, assuming the blast doesn’t kill them. The experience for winning is also shared between the two. In the case of the Balanced Pack, Dinohumon and Kyubimon can fuse to form Agunimon, who shoots a giant fireball at the enemy.

And that about wraps it up. This should be enough information for anyone to get started on the game and be familiar with its workings. I hope you enjoyed, and I’ll see you next time.