Recently I’ve been playing a game called Darkest Dungeon- or as I’ve come to think of it, “Dark Souls, RPG edition”. The game is very difficult, or at least gives the feeling of difficulty- it is not that objectives and missions are hard to complete persay- they have been, but not terribly hard. No, the hard thing about this game is that even if it doesn’t kill you, it will weaken you.

Let me explain. The setting itself is quite a dark one- there was once a rich estate owned by a wealthy family. They lived good lives, until one of them heard about something buried underneath the manor. Curious, they started digging, until they found something terrible. It unleashed ruin upon the manor, brought forth foul beasts and drove people to madness. Now you have been called to the manor to help destroy this blight and save your land. But it will not be easy, nor will it be a job free of bloodshed. 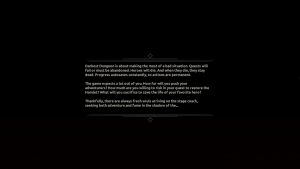 In most RPGs, you have a party of characters which fight your battles and so on. You do here as well, but your characters aren’t like the ones in other RPGs. They can grow and become stronger, but they can also become weaker. And they will die. Quite often, actually. New recruits come in for you to replace your dead, effectively forcing you to explore the various options and see what works- but no two recruits are the same, even if they have the same class. They may start with different unlocked skills, or have different traits, both positive and negative. 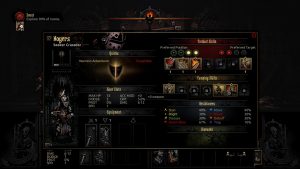 As your warriors battle the forces of evil, you need to be aware of not just their health, but also their stress. Prolonged fights, moving in the darkness, and certain attacks from enemies all increase stress. While at first I shrugged this off- after all, it didn’t seem to have any negative effect- accumulating a lot of stress is very bad for your characters. Once it gets high enough, a new negative trait, called an Affliction, will appear on the character, weakening them in some way. In one case, for instance, my Grave Robber became Paranoid of the other party members, and refused to let the other characters heal her- which let to her death. Shortly after, the stress of losing one of the party and the ongoing battle made the Plague Doctor develop Abusive behavior for the only other remaining party member and stabbed them, apparently for being an uneducated plebeian.

More rarely, they may develop a positive state in harrowing circumstances, called a Virtue. This stops the character’s stress from increasing past 100, which is when Afflictions start happening. Aside from other possible benefits, all Virtues have the character heal themselves at random, lower the stress of others in the party, buffing them, and they’re immune to stress caused by others who may be Afflicted. Unlike Afflictions, Virtues end after leaving the dungeon.

However, Afflictions and stress can be removed. Specifically, the Abbey or Tavern have various activities that a character can participate in, though they may have existing Quirks that prevent one or another- Faithless characters will not pray, Known Cheats cannot gamble, Enlightened Characters will only meditate, and so on. The Sanitarium can be used to remove negative Quirks or help inspire positive ones. A character can have up to five positive and negative Quirks, and various activities, like dungeon crawling, inspire new ones. The Sanitarium can also lock in positive ones so that they cannot be replaced by more, and negative ones will become locked if left untreated for too long. 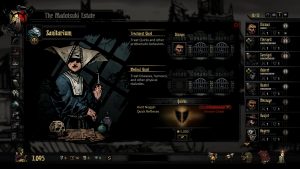 All of this makes the characters especially human in my eyes- while you can try to treat them as best you can and make them as capable as possible, stress and Afflictions can and do happen, Quirks exist, and they simply are not the perfect heroes we often see that can fight eldritch monsters with not even a shudder of fear. This is even shown in how they arrive- when you check your new recruits, they may have been frightened by the path to your estate, or excited to get going on their first quest, while the ones who have gone on a quest typically are more subdued and wary.

Of course, being mortal comes with advantages of a sort as well- while in most games a character will die as soon as they lose all health, these characters will instead enter the Death’s Door state. At this point they will suffer some penalties, but they will be alive still- but any further hits have a high chance of finishing them off, for good. Healing them will get them out of this state, but they are now recovering from their almost fatal injury, and still suffer some penalties for the duration of your quest.

On the other hand, there is also the possibility of Heart Attacks- if a character reaches the maximum of 200 stress, they will instantly suffer a Heart Attack, lowering their health to zero and dropping them at Death’s Door, and killing them if they are already there. This actually happened to me on my second outing- which leads me to how exactly that happened.

You see, as you explore you use torches to light your way. In bright light, enemies will be surprised, giving you the first move, lowering stress damage you take, and giving you a better chance of scouting out the next area, letting you know what is coming. In other words, ensuring a safer trip. Things reverse in darkness- you will be caught by surprise, more stress, and you will have no warning of coming encounters and traps.

However, some good comes of it- you have higher chances of critical hits in the darkness, and you get more treasure from encounters the darker it is. I attempted that, and I instantly ran into the worst possible scenario. The Shambler. As I later found at, at my early point of the game, Shamblers only appear in total darkness, one percent of the time! I simply was very, very, unlucky. 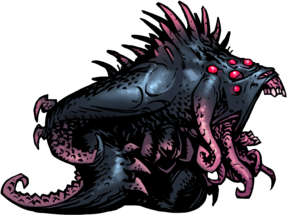 The beast was far too much for my party to handle, having an enormous health, and making up for its low speed by summing very quick tentacles to strike with. Two of its attacks summon tentacles, as well as inflicting either Bleed or Blight on your party, damaging them unless it is cured. His last attack increases stress instead… but also shuffles your party around, throwing them out of whatever position you need them in, as certain classes are better in different spots, and can only use certain abilities from different spots. I did manage to escape the Shambler, but with only two members of my party left- and given how dark it was, one of them had a Heart Attack as soon as we left the battle, killing him and leaving me with just the one. Needless to say, that excursion did not go well.

Luckily, you can stop the light from faltering by using up another torch, or, if you want to fight tougher foes and get more rewards, you can snuff out the torch. Some enemy attacks will lower it as well, and some classes have attacks that increase it. I personally would recommend keeping the lights on as much as possible early on, since when starting out you will have less means to deal with enemy attacks and stress, as the Sanitarium, Abbey, and so on have to be unlocked, and your characters will be weaker. However, once you have built up strength and experience, perhaps taking a plunge into the darkness would be rewarding. 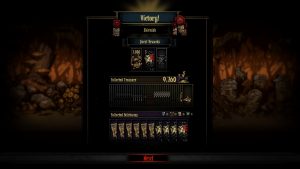 And I certainly am glad I took the plunge in getting the game. For all its difficulty and for all my own initial bad luck, I am enjoying it, and the difficulties only made me want to try harder. If any of you think you can take on the Darkest Dungeon, I wish you good luck.