If you’re a fan of fighting games but have only been having limited success with playing on a D-pad, it might be time to crank things up a bit. While it’s entirely possible to play fighting games on your PS3 with the regular games controller, if you’re aiming for more accuracy, slicker moves and all-round kick-ass action then an arcade stick is your best bet.

Sadly just switching to an arcade stick won’t suddenly make you slice through your enemies like a pro. In fact, you could even experience a temporary set-back while you get used to the different way the game is controlled. But put the man hours in and you’ll find it will pay dividends in the longer term.

Having decided to make the switch, the only thing left to decide is what model to buy. Here’s a quick run through of some of the best PS3 arcade sticks on the market.

A Brief Word of Warning…

You’ll find a range of arcade sticks up for grabs but it’s worth bearing in mind that Sony aren’t the biggest fans of non-licensed peripherals. In the past, SCEA updates have suddenly rendered non-licensed arcade sticks as useless with Sony remaining unrepentant about the impact on gamers.

You can still buy arcade sticks and other peripherals which haven’t been licensed, particularly if you opt for a top-end custom made job. However, if you do, be aware that you’re leaving yourself open to the risk of ending up with a controller which may suddenly stop working. 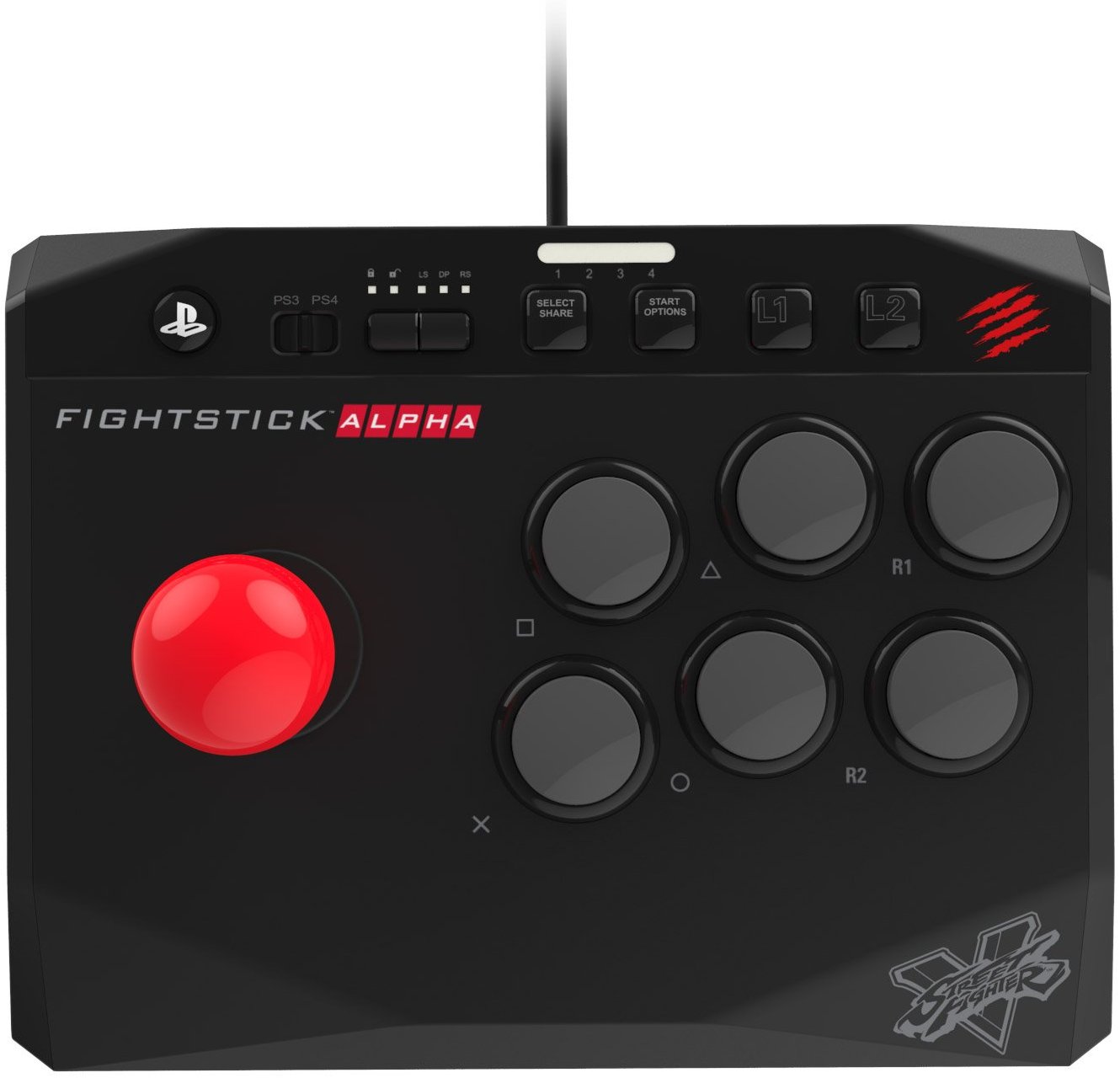 Mad Catz have made quite a name for themselves in the arcade stick industry but it’s not just the big hitters who can benefit from their top quality products.

The Alpha is an entry level arcade stick from Mad Catz which may not have all of the features that their more expensive designs have, but nevertheless provides an excellent starting point. Made from plastic and small in size, it’s the ideal choice for players who plan on taking their stick around to a friend’s house for a session. As it’s only an entry level model, it’s not going to hit the sweet spot with more advanced gamers who want to compete in tournaments, despite its easy portability.

You won’t get the benefit of Sanwa buttons but the quality is still good enough with the generic buttons included. This isn’t a stick you can mod as everything is soldered onto the board so if you plan on customising and upgrading this isn’t the right pick for you.

There’s no Vewlix layout here either as players will have just the six buttons but there’s some tasty extra features such as toggle lock and easy menu navigation with miniature L1 and L2 buttons across the top.

If you’re already a fan of arcade sticks and know that it suits your gaming, you might want to consider investing in a more expensive design which doesn’t just play immaculately but looks pretty sharp too.

The Qanba Q4 Q4RAF Black Arcade Stick is a long way from being a budget option but scores high on the wish list of many gamers. Despite being strong and robust, the controls are feather sensitive and respond to your slightest twitch and command.If you’re more accustomed to playing on a budget arcade stick, this may take a bit of adjustment but once you’ve gotten used to it the potential is far greater.

There’s 8 buttons included plus the option to block two buttons for those who just need six (such as Street Fighter). There’s a slider on the stick so that players can switch between the PS3/PC and Xbox 360. The restrictor gate is square but still allows easy modding to octagonal, should you so desire. The parts are made by Sanwa, one of the best quality manufacturers of components.

The stick itself is heavy duty and can handle intensive play without a problem. There’s 4 buttons on  the top: turbo, home, select and mode. Practically speaking, it’s a bit of a diamond too with a carrying handle, a cable compartment and non-slip rubber feet. Regular players will be comfortable with the design as it uses the standard Vewlix layout for optimal ergonomics.

It’s worth mentioning that this isn’t a lightweight model and if you’re planning on carrying it to tournaments, it’s much heavier than many of the other arcade sticks. 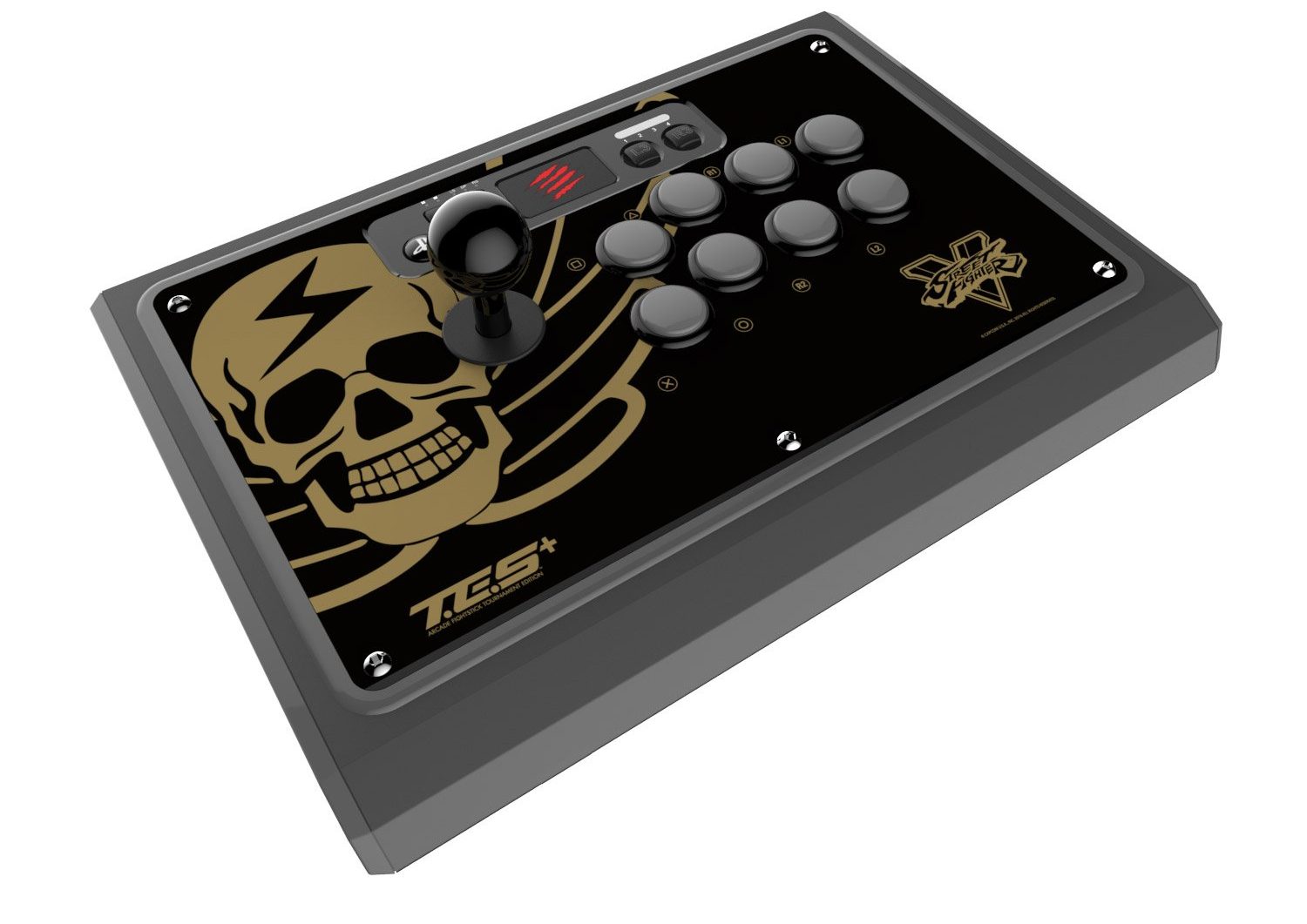 Another Mad Catz title but it’s more than a worthy inclusion with this hard hitting arcade stick which can take a real pounding.

The touchpad on this device is flexible and responsive so you can double tap and perform a variety of in-game functions deftly. There’s some handy other features too such as the ability to disable certain buttons to prevent them accidentally being hit and interrupting gameplay.

As one of their upper end models, players will have the benefit of top grade Sanwa Denshi components so there’s no need to carry out extensive mods to get the very best. You can enjoy a hardcore session bashing away for several hours and still walk away with an arcade stick that doesn’t show even the slightest sign of wear and tear. The eight buttons are perfectly placed and seem to work well with the titles on the market, particularly Mortal Combat and Street Fighter.

With a padded metal bottom, you won’t find this unit sliding around but nor will it crush you beneath its sheer weight. It’s not the heaviest design but it still has a nice heft that makes it feel solid.

Three of the Best

The above three arcade sticks for the PS3 represent some of the best models in the market at various price points. However, no matter how well they score in reviews, an arcade stick can be a matter of personal preference in terms of weight, stiffness of the buttons and layout. If you own Sony’s latest console, then you should check out the range PS4 arcade sticks available. If you’re not looking to mod your stick you’ll find there’s much more choice in the market, but even if you are, there’s plenty of options which allow customisations too.