XBOX Scorpio vs. PS4 Pro – Which Will Deliver the Best Overall Experience?

Over the last few months it looks as if Sony and Microsoft’s R&D departments are about as leak-proof as a sieve. Detail after detail has emerged about both the Playstation 4 NEO and Project Scorpio though none of the important details, such as what, why and how have emerged yet. 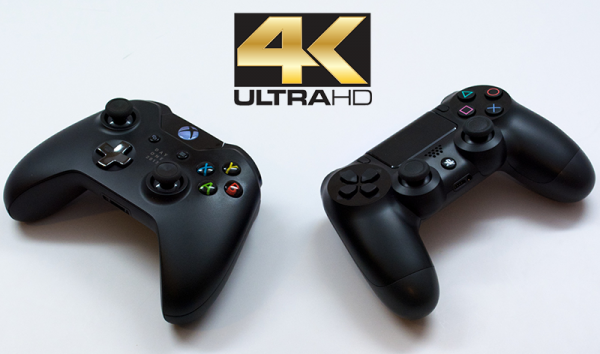 So it’s with that in mind that we’ll take a quick look at just what these new consoles mean for you and take our best educated guesses as to what’s going on here.

Firstly, what are they? Well the NEO and Project Scorpio are Sony and Microsoft’s attempts at selling you a new console without having to start a new console generation. The idea is that they’ll essentially be beefed up versions of the PS4 and the Xbox One respectively. This means that they’ll play all of the games that the ‘original’ consoles do but they’ll be able to play newer games at a higher spec whilst it’s still up in the air as to whether older games will be able to take advantage of the newer harder. Perhaps it’d need to be patched in by the devs, though I don’t know how much support there will be to revisit old titles so that new console owners can get a ‘better’ experience.

Speaking of which – just what does ‘better’ mean in this case? Well, the idea is that the new hardware will be able to push more polygons, keep a better framerate and offer improved features (e.g. higher number count in multiplayer). Sounds good, right? Well…

The fact that new and more powerful consoles are being released so soon after the PS4 and Xbox One’s release has upset some people. This is the internet after all and people are always upset about something, though in this case do they have a point? Assuming that Microsoft and Sony aren’t fibbing, I’m saying ‘no’.

This is because both Microsoft and Sony have gone on record to assure people that the consoles sitting underneath (or next to, whatever) their TVs will continue to be supported. So whilst Fifa 18 might look better on the Playstation 4 NEO, the vanilla PS4 will be able to run it too. Call of Duty 27 might offer a higher resolution and a smoother framerate on Project Scorpio, but the Xbox One will be able to run it as well. Just not as well.

This, still, isn’t enough for some vocal commentators on the world wide web, but it’s a complaint I don’t personally understand. As it is, the new consoles will be better but they won’t retroactively damage your current consoles or make them obsolete. Every time a new Android phone gets launched (about 23 a week) this doesn’t suddenly make the phone in my pocket worse or incompatible with the app store.

Whilst some people will be upset about the idea that consoles are becoming ‘like phones’, with new versions and upgrades being made seemingly yearly, it shouldn’t come as a surprise. We live in a world where technology moves at such a pace that a ‘7 year console life-cycle’ makes less and less sense. It’s also important to bear in mind that consoles have been having re-models and improvements made to them for years now. This isn’t an entirely new phenomenon.

If you recall, the original Xbox 360 launched without a HDMI port. This is unthinkable in this day and age but believe me it’s true. So you know what happened? A new SKU popped up and it had a HDMI port built in. There was a new motherboard design that made it into post-launch 360s, they were known as ‘Jasper’ models and they were objectively better. They didn’t make the game look better, mind, but they stopped the phenomenon known as ‘Oh crap, my 360 is now a melted puddle of plastic, please help’.

There’s also the example of the 3DS to look at too. Nintendo recently launched a new version of the 3DS (it’s literally called ‘New 3DS’) and this is essentially a 3DS that has better specs. There are some games that will run ONLY on the New 3DS and other games that are near unplayable on the 3DS as they rely so heavily on the extra oomph the New 3DS gives.

So if both consoles are getting newer and better versions, that’s the end of the discussion, right? Well, not exactly and this is mainly down to the fact that we don’t know exactly what’s going into these new machines. Officially, the specifications of the NEO and Project Scorpio haven’t been announced, though the previously mentioned leaky nature of MS and Sony has led to some pretty veracious claims made by multiple sources.

Starting with the PS4 compared the the PS4 NEO, we’ve got what looks to be improvements in all areas that count. A better CPU with the current 8 cores at 1.8Ghz getting boosted to 8 cores at 2.1Ghz. RAM has a boost too going from 8GB at 176GB/s to 8GB at 218GB/s. Finally, the GPU also has bump going from 18 GCN compute units up to 36 GCN compute unites.

I don’t want to talk too much about the rumoured Project Scorpio specs, as they haven’t been as definitively leaked as Sony’s information, though it does appear that the Scorpio will have an even greater boost to GCN numbers and RAM speed / capacity.

As we all know, sometimes the ‘better’ piece of technology isn’t always the BETTER piece of technology. There was no doubt that in the last generation, the PS3 was by far the superior piece of hardware. More cores and faster memory allowed for titles like The Last of Us to grace our screens. However, the PS3 was by all accounts difficult to make games for. It was tough to get the most out of the hardware and so only very few titles (mostly those made by Naughty Dog) ever took full advantage.

So this is the real crux of the issue. Yes, these new consoles will be able to do more but just how easy will it be for the developers to do more? How much more work will it be to ensure that a title works on the PS4 / Xbox One and that it works ‘better’ on the PS4 NEO / Project Scorpio? If this isn’t a trivial task, then that’s great news and it’ll mean better framerates and resolutions all round. If, however, it turns out to be a real thorn in the side of developers, something that takes away precious resources from making the ‘actual’ game, then you can expect the difference to be much more minimal.

Personally, I’m excited for what’s about to happen. If it means we get better looking games, brilliant. If I don’t HAVE to buy a new consoles, superb. If this is something that’s exciting developers and not striking fear into their hearts, I’m all for it.

What about you guys? Are you upset that these companies are trying to fleece more money out of you? Could you not care less about frame rates? Did you even know a New 3DS was launched? Drop us a comment, follow us a Tweet or… something to do with MySpace? I can’t keep up.