That, in case you didn’t know, is the required lead-in for any review about a wrestling game this year.  Don’t trust any review that doesn’t start that way.  Awwww, hell yeah.

WWE-style wrestling is about one thing, and this is equally important to understand if you’re a developer as it is if you’re a wrestling fan:  it’s about putting on a good show.  It’s not really about pulling off elbow drops, clotheslines, and Koronco busters.  It’s about letting the audience taste the pain and anticipate the swelling tide of violence.  Everyone knows that wrestling isn’t real, it’s pure theatrics.  And when you play a game that puts you in the ring, it’s not just about winning.  It’s about rhythm, staging, drama, smack-talk, and looking fearsome in tights.

Step one to creating an epic match: get your lineup straight.  WWE ’12 has a great one built-in, with more players available to be added via downloadable content.  Check.

Step one point five is to make sure the real-world wrestlers are represented accurately, right down the costumes and smoke-and-laser filled theatrical entrances.  WWE ’12 does you one better by allowing you to tweak existing wrestlers’ stats and abilities, and customize your own player-generated characters down to the minutia of logos, signature moves, and zebra-striped patent-leather chaps.  Check.

Step two is to get the rhythm of a match, which has to start with aggravation and end, preferably, with a stunning display of shame-inducing ultra-violence.  Unlike previous entries in the series, WWE ’12 supports a fluid progression from grappling with an opponent to choke-slamming the memory of their momma out of their stupid, stupid heads.  Matches start light and end satisfyingly heavy.  Escaping a particularly devastating move is possible, but requires superb timing and attention.  And the more you win, the more damage you can do – skillful performance in a match results in visibly weakened opponents and allows even more punishing attacks, with seamless and convincing animations that won’t disappoint.  It’s the spirit of Mortal Kombat, but with scary-looking beefy dudes with funny names in skin-tight outfits instead of…actually that’s kind of still Mortal Kombat, huh.  Whatever.  Check. 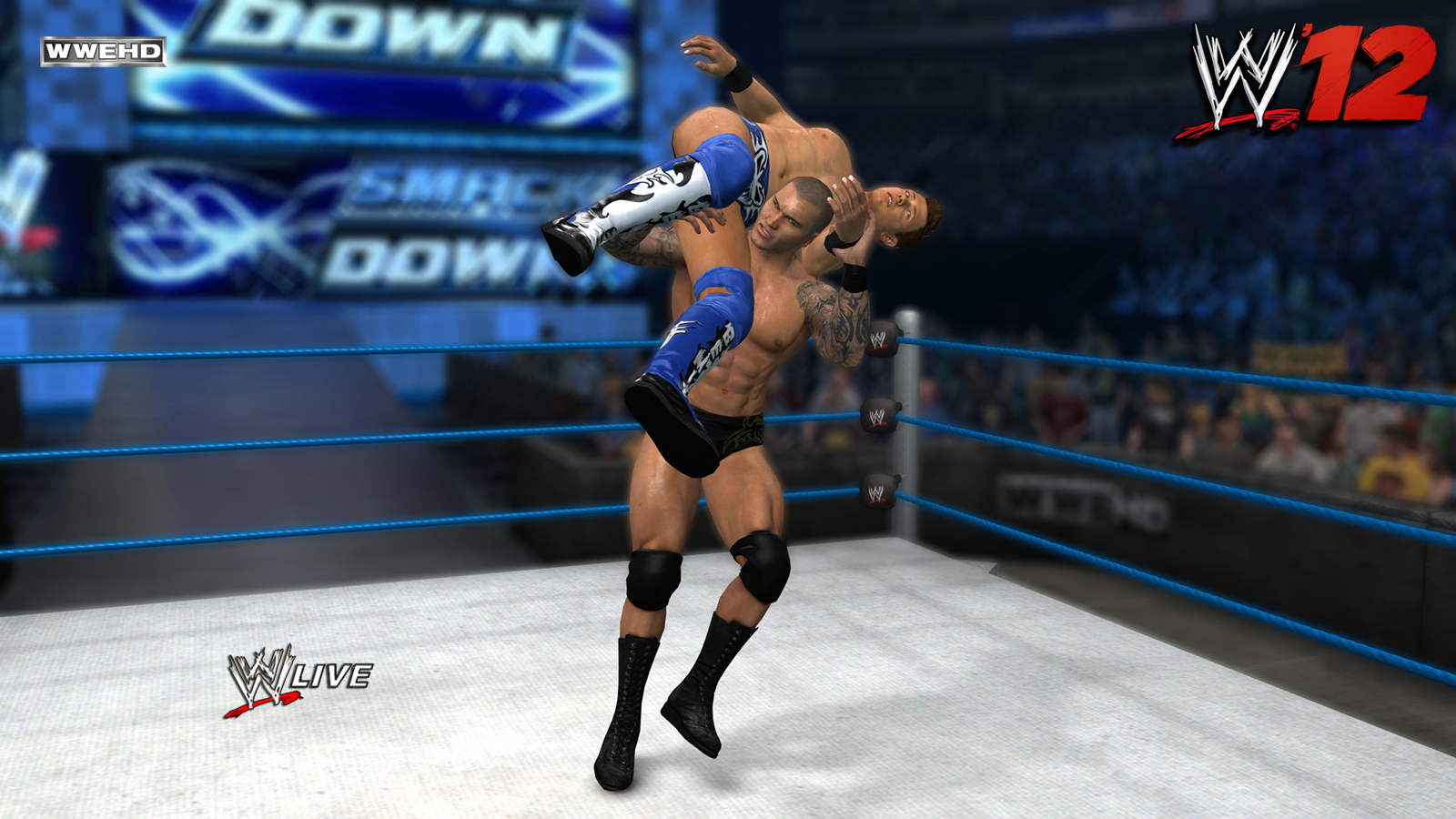 Step three is to make the focus on the wrestling matches themselves, and not bog down the game with lots of cutscenes and weird sequences of characters blathering while definitely not busting heads.  Here’s where the wagon does lose a wheel or two, as there is kind of too much of this in WWE ’12,  and the single-player campaign is, as is often the case in the era of massively multiplayer everything, kind of restrictive (limiting you to four characters) and stultifying.  Still, all the fake commercials and backstage shenanigans do add an air of authenticity to a game which is based on what is, in the end, a really popular TV show.  So, OK.  Good enough.  Check and mate.

Three steps is way more than enough for me, and I would expect for most wrestling fans.  Do you like wrestling?  OK then, you can stop reading.  Do you think wrestling is stupid?  Hoo boy.  Play this game and accept my dare not to get caught a-whoopin’ and hollerin’ by the end of your third match.  You will be able to smell what THQ is cookin’.  This is The Game…and it is that damn good.

Nearly 75% of all American households have at least one member who plays video games on a regular basis. If you are an avid gamer, you...
Read more
0 0 votes
Article Rating