Rally driving is a terrifying prospect. For those of us who’ve never tried it or never been interested in trying it, watching the drivers career around bends that should by rights launch their cars into roadside ditches is a scary experience. Luckily, we’ve got video games to help us live that fantasy vicariously (because Lord knows you wouldn’t get most of us here into a rally car).

Specifically, we’ve got the WRC series. This franchise goes right back to 2001’s World Rally Championship, created by Evolution Studios. The series has passed through three different developers since its inception; it took a five-year break between WRC: Rally Evolved in 2005 and WRC FIA World Rally Championship in 2010, passing hands from Evolution to Milestone as it did so.

The franchise now finds itself in the care of French studio Kylotonn, who’ve been working on it since WRC 5 in 2015. This is their fourth effort, and the first time the studio has taken a break for a year since the fifth installment. Usually, when a studio breaks like that, it’s because they want to refresh themselves and figure out what makes their franchise special. It’s not an overstatement to say that Kylotonn has done just that with WRC 8.

Honestly, if you’re not playing this game on a PS4 Pro, an Xbox One X, or a souped-up gaming PC, you’re not doing it justice. The sheer realism on display here – the way cars gleam in the sunlight, the skidding of tyres on dirt roads, the beautiful mountain environments – demands to be experienced with powerful hardware. If you ever needed an excuse to upgrade, WRC 8’s sheer visual clout is that excuse.

Newcomers are often put off by specialist rally driving games like this one, but Kylotonn has put a lot of work into making sure WRC 8 is approachable for the uninitiated. At the beginning, you’ll be put through your paces in a trial race. This race will determine which racing aids the game thinks you’ll need as you work your way through the career mode.

For the most part, the game’s guesses are pretty accurate. The difficulty levels here have clearly been set up to try and attract an audience that isn’t too familiar with rally racing, and while the success of this venture remains to be seen, we definitely appreciated it. Being able to share the joy of this game with our rally driving enthusiast friends is a special treat we haven’t really experienced before.

“Joy” really is the watchword when it comes to WRC 8. This game exudes passion and professionalism from every pore. It’s clearly still geared towards an enthusiast audience, which the ridiculously unforgiving driving mechanics will betray; if you don’t like driving games that don’t hold your hand, then this definitely isn’t the experience for you.

Those who do, or who don’t mind giving that sort of game a try, will find a surprisingly deep experience in WRC 8. The career mode has been given an overhaul since 2017’s WRC 7. Usually, racing game career modes are fairly token and exist only to give a framework to the most important aspect of the game, i.e. the racing. That’s not the case here.

Frankly, the amount of options and customisation available to you in WRC 8 is staggering. There’s a sort of “skill tree” which allows you to sink points into aspects like research and development, recruitment, and even physiotherapy. All of these aspects change the game in subtle but definable ways. Your physio keeps your team healthy; R&D makes your cars better; recruitment improves morale.

The depth of the career mode reaches almost management sim levels at times, which means this is probably going to be quite an off-putting experience for anyone who’s looking for Mario Kart. If you are, though, then you already know you’re applying in the wrong place. You need to be interested in real-life racing on a certain level to enjoy the WRC games, and WRC 8 is no exception. 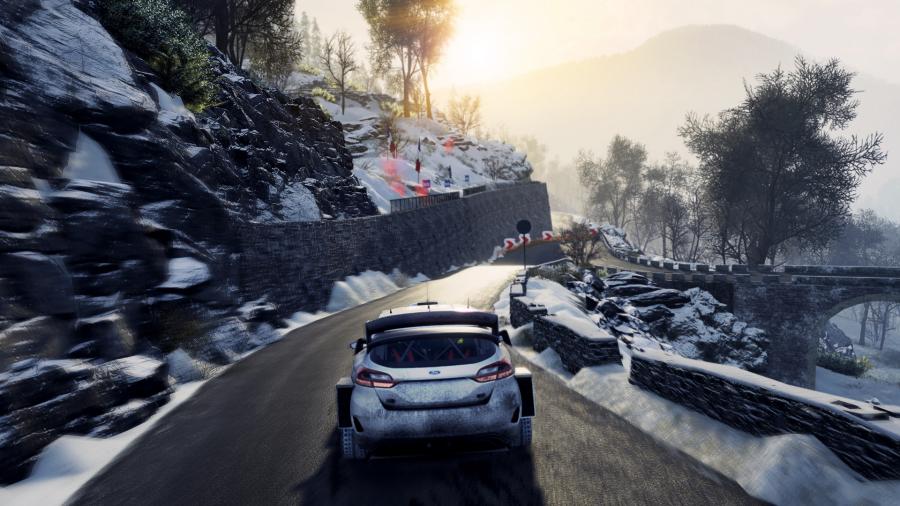 That is perhaps the biggest criticism we can level at WRC 8: it’s by no means a relaxing experience. It’s pretty dizzying in terms of depth; its menus are labyrinthine, there’s a huge amount of nuance to its driving systems, and its stages are treacherously difficult to navigate. It does come complete with variable difficulties for newer players, which we welcome, but it’s still not for everyone.