When revisiting old video gaming classics, there’s always a sense of dread that the reality won’t match up to your memories. Nostalgia is a funny old thing, and it blinds even the best of us, especially when we’ve grown up with something and can’t extricate it from memories of our childhood. The games we played when we were younger will almost never hold up to modern scrutiny; they’ll forever be preserved in amber, remaining a pleasant but unattainable fiction for us.

Sometimes, though, a game you played when you were younger is just as brilliant as you remember it being. Thanks to Xbox Live Arcade and the Wii Virtual Console, many of us rediscovered the gems of our youth with a slightly modern sheen added to them, and we rejoiced, because they were just as compelling and enjoyable as we remembered them being. From Castlevania: Symphony of the Night to Super Mario Bros 3, the games of our youth kept on giving long after they were gone.

All of this brings us to Windjammers, a relatively obscure Neo Geo title currently up for grabs on the Nintendo Switch eShop as part of the latter’s Neo Geo Classics range. If you didn’t play Windjammers when you were a kid, don’t worry; it didn’t launch to the most favourable reviews, and although it was one of the most popular 2-player games on the Neo Geo, that console didn’t quite do the roaring business of its rivals, so it wasn’t exactly a runaway commercial success, either.

That said, Windjammers remains one of the most compelling and enjoyable examples of its genre. In many ways, Windjammers is the natural precursor to many of today’s eSports titles; it’s a high-stakes, fast-paced competitive fictional sports game reminiscent of today’s Disc Jam or Blood Bowl. At its core, Windjammers isn’t too complicated; players must fire a spinning disc into their opponent’s goal, much like many of the most popular sports still played today. 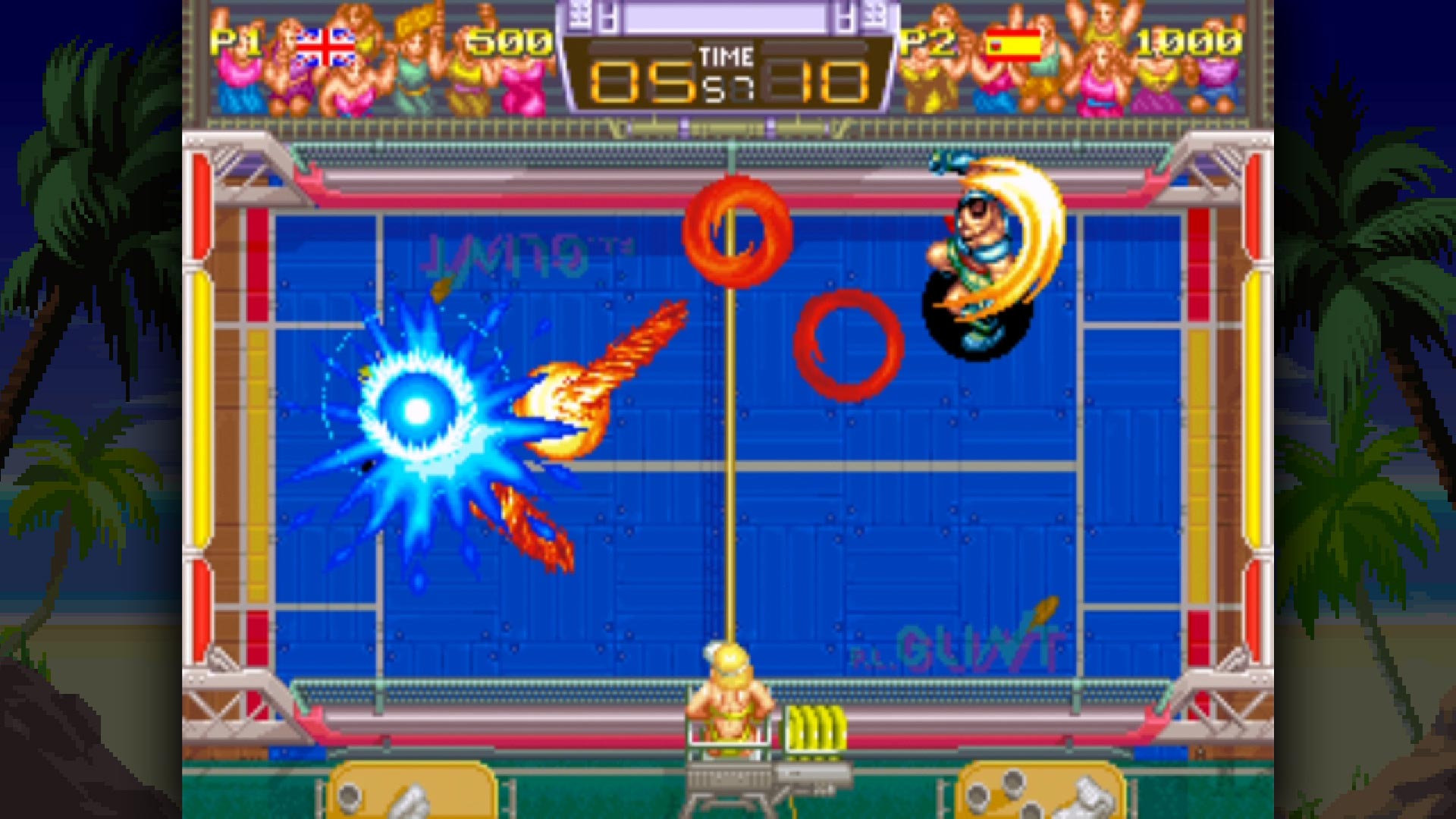 Where the game shines, though, is in the hidden depth and surprising strategic value it offers. Windjammers has an incredible control scheme which only utilises two buttons, but offers a huge variety of moves and variations on moves for players to perform. Everything from swerves and angles to special moves is possible here, and it turns what could be a fairly prosaic game of back-and-forth into a skill-based battle for the survival of your team.

That’s to say nothing of the wonderful 1990s Neo Geo visuals. Porting team DotEmu has worked hard to preserve the 4:3 crowded-around-your-friend’s-TV aesthetic of the game, so although there are 16:9 widescreen modes and visual enhancements available, the emphasis here is definitely on preserving the history of Windjammers rather than offering a definitive update or remastering. 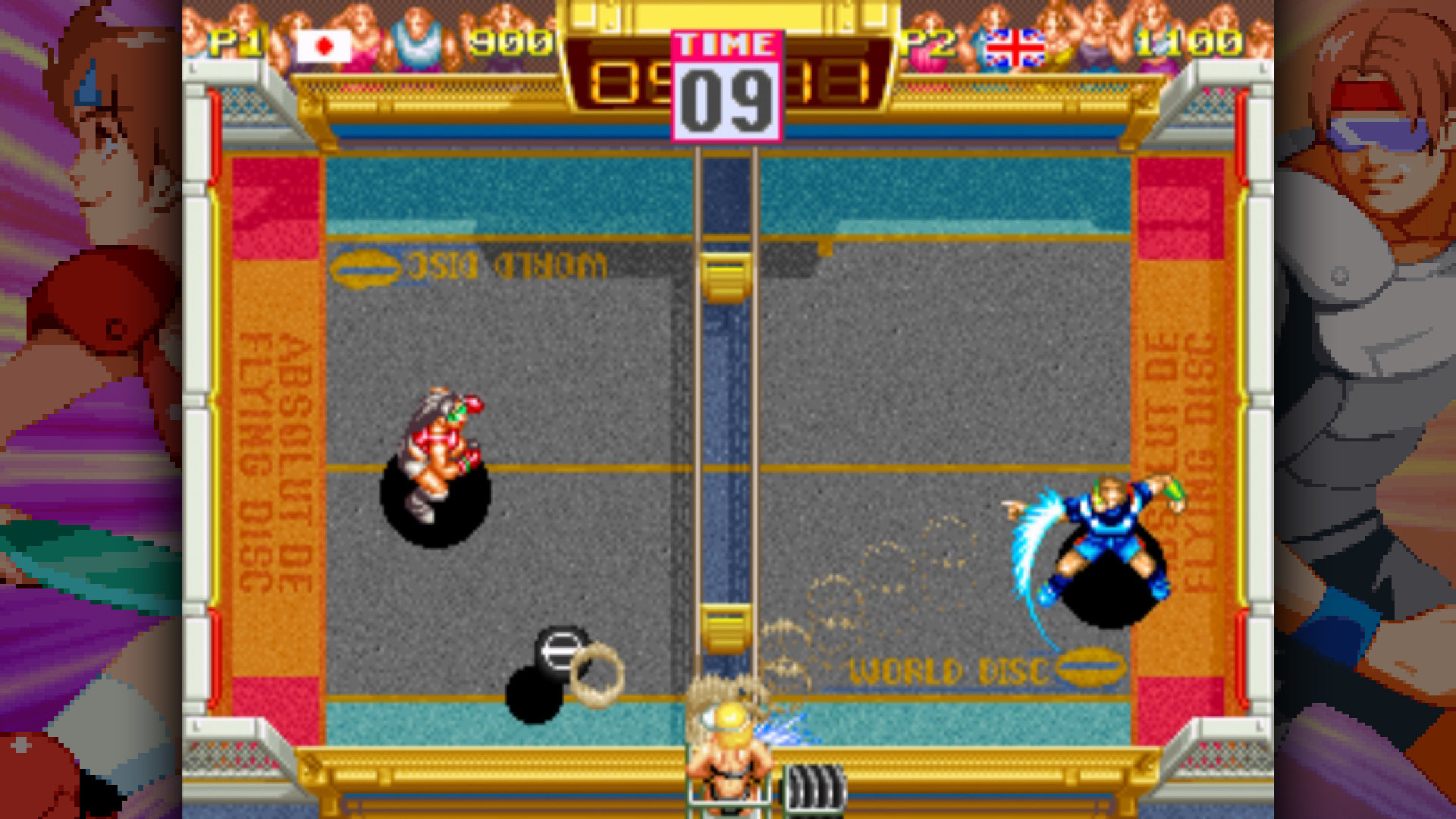 What this means in practical terms is that Windjammers is the perfect way to revisit this bygone era of gaming. The game’s aesthetic is colourful and compelling; its vibrant blues, oranges and neon day-glo palette put one in mind of its modern equivalent Rocket League, but its over-the-top excess and crisp animation make it feel way ahead of its time. Presentation as a whole is great, with the Neo Geo’s top-notch sound and visual capabilities on show. Obviously, Windjammers is a little tricky on the eyes by today’s standards, but slip on those rose-tinted goggles and you’ll have a whale of a time.

Make sure you recruit a friend to play Windjammers with you. Data East’s title wears its retro status on its sleeve, and it’s really not interested in providing a substantial single-player mode for you to get stuck into. Oh, sure, there’s a single-player tournament available, but it’s the standard “play against bots” fare that never feels as realistic or unpredictable as a human opponent. It’ll tide you over, but it’s not where the meat of the experience lies with the game. 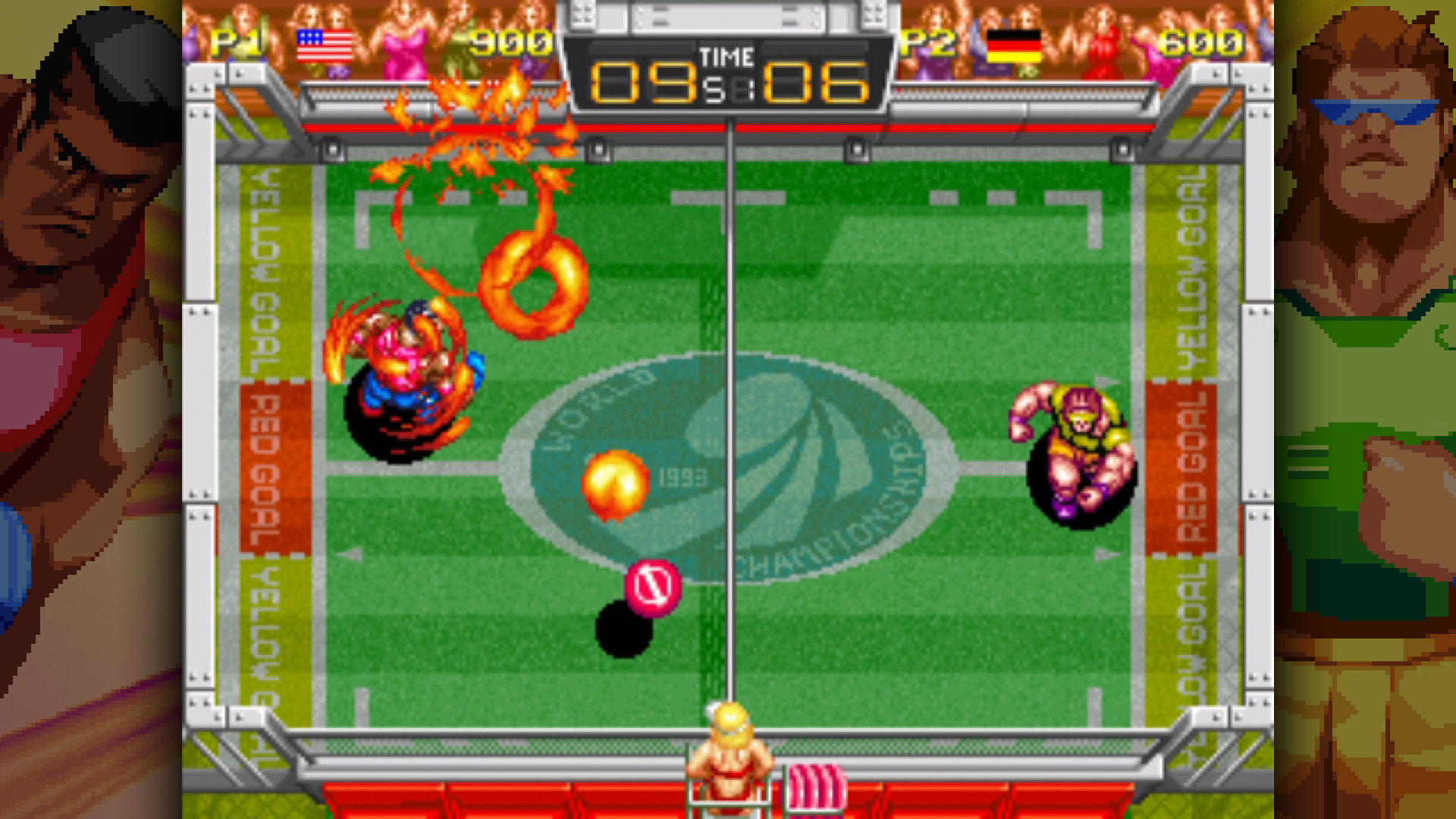 Which reminds us: Windjammers also ships with a brand-new online mode, which obviously wasn’t present in the original release of the game. We weren’t able to test its netcode and make sure the connection was up to scratch, but in principle we’re big fans of this move. Windjammers is definitely a title best enjoyed by two players, so hand that second Joy-Con to your friend and get stuck in.

All in all, Windjammers is the best kind of retro release. It preserves what was so great about the original Neo Geo title – its colourful 16-bit graphics, sound that oozes ‘90s-era attitude, and compelling, deep gameplay – and spices it up with just the right amount of modern sheen to make it more closely resemble the game of our memories. It’s not perfect, but it’s an absolute blast of an experience that might just transport you back to your childhood. If you’ve never played Windjammers, then this is the definitive version of it to grab.