Ti West’s The House of the Devil is a rarity. A back-to-basics throwback to the horror fundamentals of the late 70s and early 80s, set in the period that at no time gives a self aware wink. Made in 2009, the exceptional attention to every facet of the era is so successful that if you were flicking through the cable channels and turned it on you would believe it was in fact a lost gem. The marketing campaign for the film even included a VHS copy for fans.

Channeling elements of the popular slasher, babysitter in peril and satanic panic genre the film is an exercise in slow burning suspense that succeeds in achieving a level of anxiety through nothingness that matches its brethren and refuses to go for cheap thrills. The gore is limited; it’s the dense atmosphere of ominous horror created by a minimalist score, subtle signs of danger and deliberately slow pacing that strain the nerves. 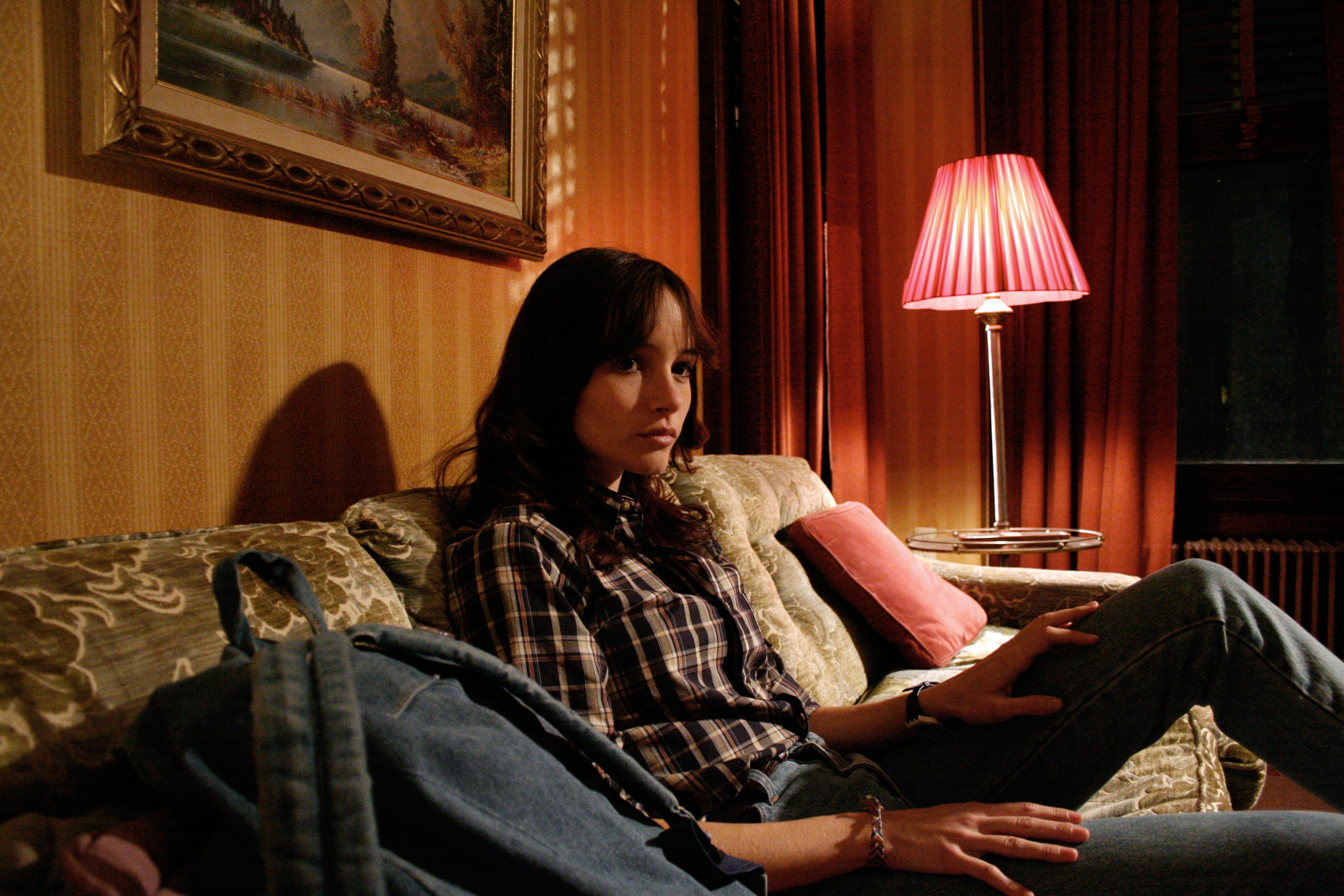 As the film opens a full Lunar eclipse is due that evening. We meet Samantha Hughes (Jocelin Donahue), a pretty college student looking at a one bedroom apartment. She likes it and accepts the rental despite not having the cash to cover the first month’s rent.

Desperate to move out of her filthy dorm room occupied by a bitchy roommate she sees a job ad on a notice board looking for a babysitter. Going to a payphone Sam calls the number and leaves a message. As she turns to walk away the public phone rings and it is Mr Ulman, (Tom Noonan) the man who placed the ad and he organizes to meet her.

After being stood up Sam eventually talks to Mr Ulman again and after some pleading she agrees to come to his house that very night. Driven to the secluded dwelling in the woods by her best friend Megan she finally meets her employer.

Once there she is told that the job is actually to look after his ailing mother. When more than enough cash to pay the rent is offered she reluctantly agrees to take the 4-hour assignment. Her friend begrudgingly leaves with plans to pick her up at half past midnight and so Samantha sits in the large, quiet house and she waits for the return of Mr Ulman and his wife.

Shot in just 18 days on a budget of less than a million dollars Ti West (Cabin Fever 2) achieves diabolical menace meticulously recreating every element of the bygone age with careful consideration. From set design to film-making techniques, right from the freeze frame credits set to synth-pop West makes sure that his tone is consistent. The appearance of 80s stalwart Dee Wallace (The Howling, Cujo) as the landlady in the opening scene immediately establishes intent. 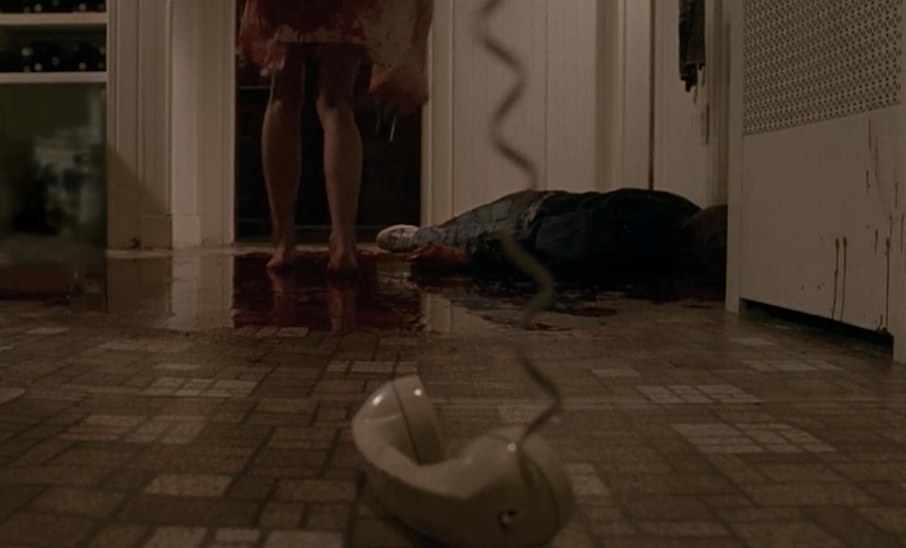 It’s the little touches that don’t draw attention to themselves that elevate the films time capsule quality. The sign of the times production design of Jade Healy uses a tape cassette walkman, shirts tucked into high sitting jeans, teased hair and a wall mounted rotary dial telephone to echo times past. Unforced insertions of retro pop music (The Cars, The Fixx) fill out the illusion.

Filmed on 16mm with clumsy framing, uneven angles and character zooms, the cinematography of Eliot Rocket (Cabin Fever 2, The Specials) never strays into the new millennium. There are touches of Roman Polanski, Tobe Hooper and many others that will be seen by aficionados.

The discreet sound design and paused tinkling of the ivories scoring by Jeff Grace (The Last Winter) contribute substantially to the impatient wall climbing creepiness.

The screenplay meshes many now classic formulas but to rattle off its inspirations would spoil the fun for you. Suffice to say like every other part of the production it is appropriate to the bygone gems it draws from with a final scene that will haunt without exposition. The only fault really, is not even a fault but the film does start with that Amityville Horror/Texas Chainsaw Massacre fake disclaimer this is “based on a true story”. It’s a flaw only because it gives away a little of the game by mentioning statistics about the subject that eventually comes to light in the final half hour, maybe a silly complaint considering the title of the film. 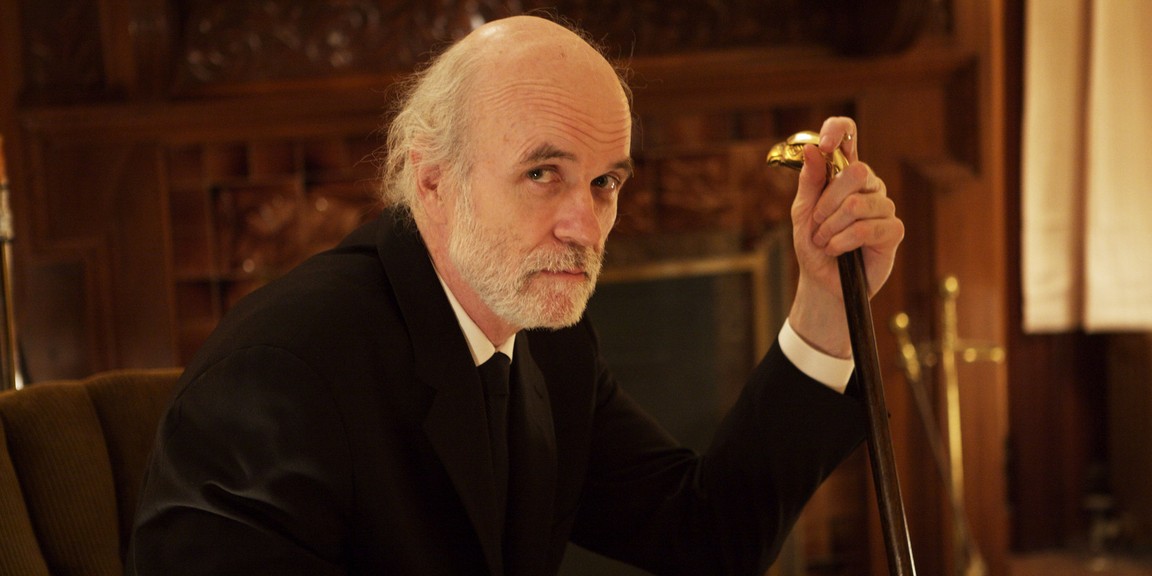 All the behind the scenes factors would have been for nothing without a worthy protagonist and former Levi’s model turned actress Jocelin Donahue (The Burrowers) does a stellar job of making us care about her plight. Her cute, youthful appearance having that all American look so prominent in films like Friday the 13th combined with believable building of concern makes her perfect for the role of Samantha. We experience the film through her eyes and when the final act finally arrives we are completely invested in her fate. Her panicked decisions totally appropriate to the genre.

The ever-scary Tom Noonan (Manhunter, The Pledge) again proves he is a master of foreboding presence even when playing congenial. As Mrs Ulman Mary Wornov (Night of the Comet, Silent Night Bloody Night) brings an equal amount of threatening politeness that lets us know all is not as it seems.

Greta Gerwig (Baghead, Arthur) as Sam’s best pal Megan is like a cross between Linda Hamilton and Brittany Murphy. She has that 80s look down and totally fits.

If you haven’t already worked it out John Doe was hugely impressed with The House of the Devil. Consciously trying not to over hype it because the film is an understated gem rather than full blown house of shock, it’s not for those with a short attention span. All JD will say is that anyone of the generation this film emulates should certainly put it on their Halloween list for the end of the month.