While I have heard that video games based on movies often have difficulties, or aren’t made well, Star Wars: Revenge of the Sith was certainly an exception. It is sort of a combination beat ‘em up and fighting game- the vast majority of the game is fighting droids and clone troopers as Anakin and Obi-Wan, but the bosses are able to face the heroes on equal footing, and help increase the roster for the versus mode, both of which I found quite fun. 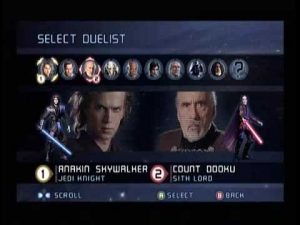 Obviously the normal enemies won’t stand much of a chance against our characters, and the controls certainly emphasize this. Battle Droids fall to pieces with a single swing, and while some are more durable, like the Super Battle Droids, their attacks can be stopped just by blocking, or deflected back at them at the expense of your character’s Force meter. Said Force powers can also be used to lift and fling enemies or objects, push groups of foes away, throw your lightsaber at foes for a projectile of sorts, among other things.

While most enemies are easy to deal with strikes and combos, a few, like Destroyer Droids, can block your strikes and make it hard or even impossible to hit that way- but they can still be thrown into other objects or knocked over with the Force. There are also throws that can be used on enemies that block your attacks, in particular the bosses. Well, it would be more accurate to call them grabs- after they are grabbed then pushing Square or Triangle will result in different throws, except for certain characters like Darth Vader, who simply choke enemies when he grabs them. There are also special combo moves that can knock enemies over and do more damage than average. 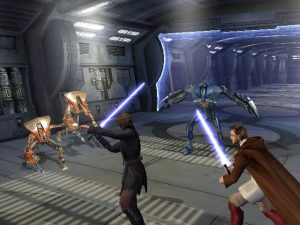 Speaking of said bosses, as fellow Jedi or Sith, they have pretty much the same powers, but not the same attacks, as your character, and can block your strikes, or even rebound them if they guard at the right moment- as can you. Jedi can use a mind trick of sorts to stun foes and get a free hit in, and Sith can use Force Lightning to damage the foe as long as they keep the attack going. However, both can be stopped by blocking. This will eat at your meter as well, but the attacker’s will run down much faster. There is also healing, done by holding the R3 and L3 buttons down, which heals you until you either break out of your healing stance or run out of Force meter. This is obviously useful between enemy onslaughts or when you get some distance from a boss.

Ultimately it comes down to exploiting weaknesses in their defenses, getting behind them when possible, and keeping them from getting attacks in while pummeling them with as many as you possibly can without overextending yourself and leaving yourself open to counterattacks. Very tactical and much more complicated than dealing with the average enemies. 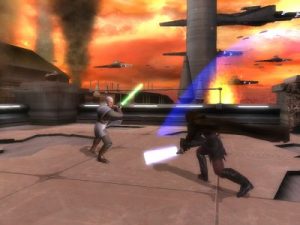 Your two main characters can also find secrets that increase their health or Force meter throughout the levels, and the more enemies they kill, the more experience they gain. Beating foes builds up another meter. First it is considered a Fair victory, then Good, Impressive, and finally Masterful, each being worth more experience than the last. Masterful in particular has to be obtained by maxing out this combat meter, but will automatically empty it out back to the bottom after a set amount of time.

All of this experience is used to improve their Force powers, so they can hit harder and work better, as well as unlocking new kinds of attacks, but you have to pick what to upgrade. Do you improve your healing, your area attacks, your Force Push? It’s up to you.

There are also bonus missions, both single player and multiplayer, unlocked via completing levels, and beating bosses unlocks them for the versus mode. One of my favorites in particular is General Grevious- I already did an article on him previously, but suffice it to say that he cannot be flung around like the others, doesn’t have Force powers, and actually uses a blaster along with his two blades, making him a uniquely different experience to face and play as.

There is also concept art unlocked as you play, showing off various things that were cut, or went through redesigns. This in particular I think shows why this movie game succeeds where so many others failed. They put genuine heart and soul into it, experimenting, tossing out ideas, testing what worked and what didn’t, not settling for merely being a good game, but for being the best it can be.

There are very few flaws I can point out in this game, other than wishing there was more, like being able play as Yoda fighting Palpatine like in the movie, but that would be an odd thing to include in hindsight, given the entire time you have just been playing as Anakin and Obi-Wan, so suddenly throwing you in a boss fight with a completely different character would be strange. Plus, you can play as Yoda in a bonus mission, and he works very differently from the others, basically hopping around the area as he attacks due to his small size, which works fine for fighting clones, but not so much for bosses.

So yes, the game doesn’t include everything the movie did, but I do not fault it for doing so, as that helps condense it into just these two characters and their fights, naturally leading up to their battle at the end of the movie on Mustafar, and you can even play through that as both characters to get different endings. And, as an extra bit, they threw in the battle between Darth Vader and an older Obi-Wan, showing how their friendship ended, lead to conflict, and then the aftermath.

So, that is Revenge of the Sith. A fun if compact game that I would recommend to any Star Wars fan, and a great fighting game in its own right as well.